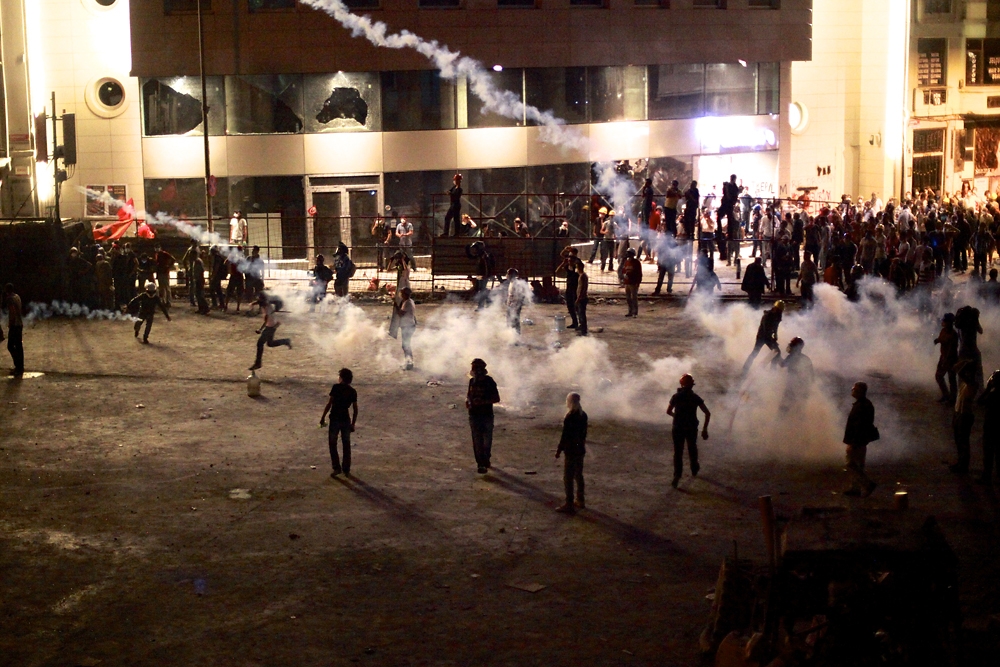 With Turkish security forces implanted in Istanbul's Taksim Square and Gezi Park and protesters scattered, Prime Minister Recep Tayyip Erdoğan on June 16 focused on reemphasizing his own authority in the face of ever-sharper criticism of the government's actions. At a rally of thousands in Istanbul, no hint of the recent display of compromise was on display. Instead, the hunt for alleged culprits for the unrest that has rocked Turkey over the past two weeks appears to be intensifying.

Authorities used overwhelming force on June 15 to evict protesters from Gezi Park and Taksim Square, setting off a night of running street confrontations in the surrounding neighborhoods. Witnesses said the violence was the worst since the crisis began in late May, and came just two days after Prime Minister Erdoğan and his critics appeared to agree on the outline of a plan to reduce tension.

The latest events appear to be having a polarizing effect, dividing Turkey into two camps: Erdoğan critics and Erdoğan supporters. A statement issued by the international watchdog group Amnesty International said more than 100 protesters were believed to have been taken into police custody during the latest police operation against Gezi protesters.

"Following a night of shocking police violence, the authorities are now denying due process to those they have detained. The police must release them immediately or disclose their location and allow access to family members and lawyers," the statement quoted Andrew Gardner, Amnesty International's researcher on Turkey, as saying.

But the prime minister saw it differently. "This country is not just an ordinary land. You can not hold a rally wherever you wish," he told onlookers at an Istanbul rally, the official Anadolu news agency reported. In Turkey, he continued, neither the minority nor the majority can dominate.

Following earlier criticism, he lashed out at international news outlets BBC, CNN and Reuters for allegedly misrepresenting the extent of the opposition to his government, charging that "[i]nternational media is alone with their lies." Police in Istanbul on June 16 reportedly were allowing only journalists with state-granted credentials past checkpoints.

Foreigners in general who went to Taksim Square also came under fire. An investigation of "social media provocators" would begin, he warned, adding that Turks should consider what are foreigners "coming from various [parts] of the world doing in Taksim Square?"

"Riff-raff," an expression that now has taken on a life of its own in Turkish colloquialisms, also were added to the list.

The Gezi Park protest started out as a simple environmental protest, with a small group of protesters seeking to protect one of Istanbul’s last green spaces. But a heavy-handed police response quickly transformed the protest into a massive show of discontent with Erdoğan’s authoritarian governing style.

After pushing protesters out of Gezi Park and Taksim Sqaure, security forces cut off all access to the area, announcing that anyone trying to enter the area would be treated as a terrorist.

But the protest movement, though now scattered, showed no sign of caving under government pressure on June 16. Turkish news outlets reported that the government brought in hundreds of riot police from outlying cities into Istanbul to prepare for challenges to the prime minister's rally. Clashes were reported throughout the day in various parts of Istanbul and Ankara. Protesters at several points attempted to reenter Taksim Square, only to run up against unyielding security agents.