Turkey: Erdoğan is all in on Repression 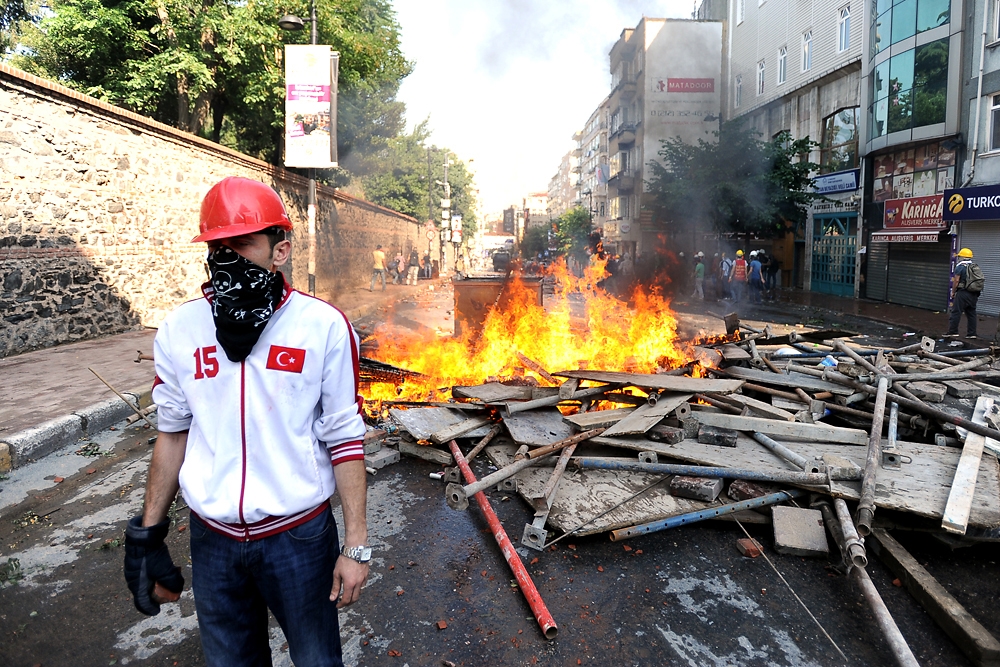 With anti-government protests in Turkey showing no signs of subsiding, Prime Minister Recep Tayyip Erdoğan is doubling down on tough talk. In addition to vowing to punish his domestic critics, the Turkish prime minister is picking a fight with the European Union. Meanwhile, one of Erdoğan’s lieutenants is cautioning that the army might be called upon to enforce order.

Erdoğan has spent much of his decade-plus rule working to curb the army’s influence in Turkish politics. So it’s ironic that he may want the military to bail him out of the current crisis. Speaking at a news conference June 17, Deputy Prime Minister Bülent Arınç raised the possibility of the military’s deployment to restore domestic order, Turkish media outlets reported. Given that there may be lingering resentment in the officer corps over the way Erdoğan’s government has curtailed the military's influence, it’s not certain how vigorously the army might act to inject itself into the crisis, now in its third week.

Erdoğan opened a new front in the crisis on June 17 by getting into a diplomatic shouting match with the EU. In an Istanbul speech, the prime minister hinted that he felt betrayed by EU officials for criticizing his handling of the protests. "They are out of their minds. They have no sense of fidelity,” Today’s Zaman quoted Erdoğan as saying. German Chancellor Angela Merkel is among the leading EU leaders who have publicly condemned the Turkish government’s heavy-handed response, telling the German broadcaster RTL that “what is happening in Turkey at the moment is not in line with our idea of the freedom to demonstrate or freedom of speech.”

Speaking at a June 16 rally in Istanbul, Erdoğan described the ongoing street disturbances, which grew out of a minor protest to a development project for Istanbul’s Gezi Park, as “[n]othing more than the minority’s attempt to dominate the majority.”

“We will not allow those privileged to take back their privilege,” he bellowed to a crowd of thousands. “We have not allowed this and we will not allow this.” The prime minister was referring to the secular elite, backed by the country's military, which dominated the Turkish Republic for decades.

In 2007, that rhetoric also was on display when Turkey witnessed some of its largest mass rallies over the question of whether or not the wife of a presidential candidate could wear the headscarf of religiously observant Muslim women. The mass protests were defeated at the ballot box, after Erdoğan called an early election, which he resoundingly won.
But Iştar Gözaydın -- a law professor at Doğuş University who has devoted much of her academic life to understanding the perennial battle between Islam and secularism in Turkey -- says the dynamic driving this latest unrest is distinct from that of the past.

“These groups are not relying on [the] prior ancien régime supported by the military,” she said in reference to the protesters. “This is more about personal freedoms, personal lifestyle. … It’s not this polarization of believers, non-believers.”

Public opinion data in Turkey indicates that opposition to Erdoğan’s authoritarian-minded governing style is growing. Just under 50 percent of 2,800 respondents nationwide in a survey by polling organization MetroPOLL stated that they believe that Turkey’s government is becoming more authoritarian, while a slightly higher number accused it of interfering in their personal lives.

The numbers were nearly evenly divided over belief in freedom of political expression – 49.7 percent said they have no concerns about sharing their views, while 46.7 percent admitted to unease, Today’s Zaman reported.

That cause for unease is unlikely to dissipate soon, some believe.

Arrests in Istanbul and Ankara since June 16, when riot police moved in to evict protesters from Istanbul’s Gezi Park and neighboring Taksim Square, number well into the hundreds, with some foreign journalists among those initially detained. Medical personnel who treated victims of the police offensive have also reportedly been taken into custody.

After the Taksim cleanout, European Union Affairs Minister Egemen Bağış announced that those who tried to return to Taksim Square would be considered members of a terrorist organization.

The prime minister also has issued warnings to nearby hotel owners who allegedly collaborated “with terror;” a reference to hotels to which protesters fled to escape tear gas from riot police on June 16.

Participants in a nationwide June 17 strike by five labor unions in sympathy with the protesters would also “bear the consequences,” Interior Minister Muammer Güler warned, The Hürriyet Daily News reported.

In addition, the government has launched investigations into so-called “provocateurs” for supposedly spreading false information about the protests via social media, and started work on regulating such platforms more tightly.