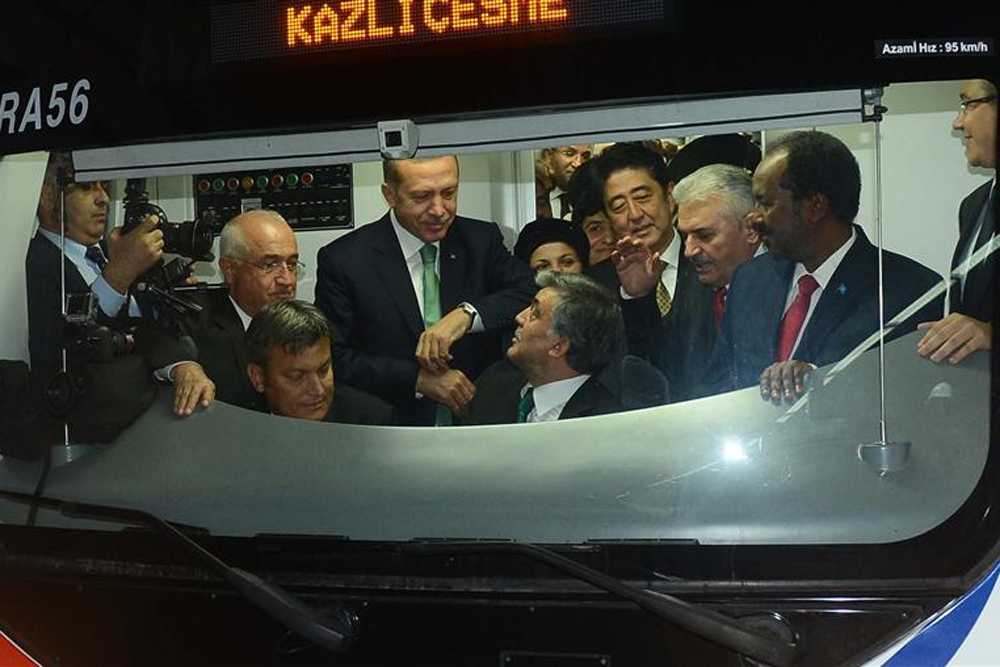 Turkish Prime Minister Recep Tayyip Erdoğan proudly describes Istanbul’s newly opened Marmaray railway tunnel, linking Asia and Europe beneath the Bosphorus, as “the project of the century.” But as a series of increasingly larger and more expensive engineering feats are unveiled, observers are wondering whether Turkey can actually afford the price of progress?

For Erdoğan, the answer will have as considerable an impact on the political health of his Justice and Development Party (AKP) as it will on the state budget. Beginning next year, Turkey is heading into an 18-month-long election cycle, culminating with a general election in 2015. With the economic growth rate for 2013 estimated by the International Monetary Fund at 3.8 percent – far lower than the average 7-percent rate of the past decade -- the prime minister needs something to keep the economy on track.

“The AKP made Turkey a mass-consumption society; this is why they won election after election” since 2003, observed economist Cengiz Aktar, a columnist for the daily newspaper Taraf. “So now, this success story, this fairy tale, is fading away.”

Conceivably, Aktar continued, that trend could be the motivation behind the boom in Turkey’s government-financed mega-projects. Projects like the Marmaray Tunnel appear to be forming the backbone of the AKP electoral strategy.

Broadcast live on television, the Marmaray’s October 29 opening was timed to coincide with the 90th anniversary of the founding of the Turkish Republic. The prime minister claims the 13.5-kilometer-long tunnel fulfills a dream of 19th-century Ottoman Sultan Abdülmecid I, but an Istanbul street-joke holds that “the tunnel took one sultan to dream it, and another to finish it.”

Turkey’s grandiose projects, “none of which have serious impact studies,” are all “just the decision of one man, the prime minister,” said Aktar.

Following the Marmaray, one of the world’s largest airports, with a million-square-meter terminal, is set next to open in Istanbul. A third bridge across the Bosphorus is already under construction, as well as a second tunnel for cars. Topping the lot is what the prime minister himself described as a “crazy project” -- a canal planned to run parallel with the Bosphorus.

Increasingly, these projects provide much of the fuel for Turkey’s economic growth, observers say.

At a March 2013 London conference, Transportation Minister Binaldi Yıldırım put the total cost of the planned mega-projects at $250 billion over the next decade.

Yeşilada, the political analyst, pointed out that Turkey’s “foreign-currency liabilities” already stand at $400 billion, which means that “you can’t add another $250 billion” in debt. “It just does not work like that,” he asserted.

With one of the lowest savings rates in the world -- 10 percent of Gross Domestic Product, according to the World Bank -- Turkey looks to foreign, as well as domestic capital to help pay for major construction projects.

Like many emerging markets, the country is increasingly relying on the United States Federal Reserve and its policy of “quantitative easing,” the mass purchase of US government securities that is intended to keep interest rates low. The Federal Reserve has indicated that the policy could start to wind down in 2014. Such a prospect, coinciding with Ankara’s construction boom, could spell trouble for Turkey.

In an October report, the International Monetary Fund, up to now a firm fan of the government’s laissez-faire policies, took Ankara to task for its practice of running up foreign debt. The government itself estimates Turkey‘s annual funding requirements at around $220 billion. “Authorities’ immediate priority should be to reduce imbalances,” the report said.

İnan Demir, chief economist of Finansbank, a private Turkish bank, maintains that the government has some scope for its high-priced projects. “The government does have room to stimulate [the] economy using the fiscal policy because the budget deficit of the government is still very low by international standards,” stated Demir. According to the latest Organization for Security and Cooperation in Europe data, the Turkish budget deficit stands at 1.7 percent of GDP, which, according to the World Bank, amounted to a hefty $789 billion in 2012.

The quandary for the government is that opting to economize could carry a stiff political price.

The AKP is still recovering from nationwide anti-government protests this summer. Its first electoral test will be next March in municipal elections. Although national opinion polls consistently put the party well ahead of its rivals, a question mark exists in Istanbul, and some other major cities.

Recent opinion polls in Istanbul cited by Turkish media indicate that the incumbent AKP mayor could be facing a serious challenge from the main opposition Republic People’s Party. “It would be the beginning of the end for [the] AKP if they lost Istanbul,” the country’s “dynamo,” warned longtime newspaper journalist Yasemin Çongar.

A buoyant economy could lessen that risk and prove a trump card for the AKP in the elections. But walking a financial high wire to get there could prove a delicate balancing act.