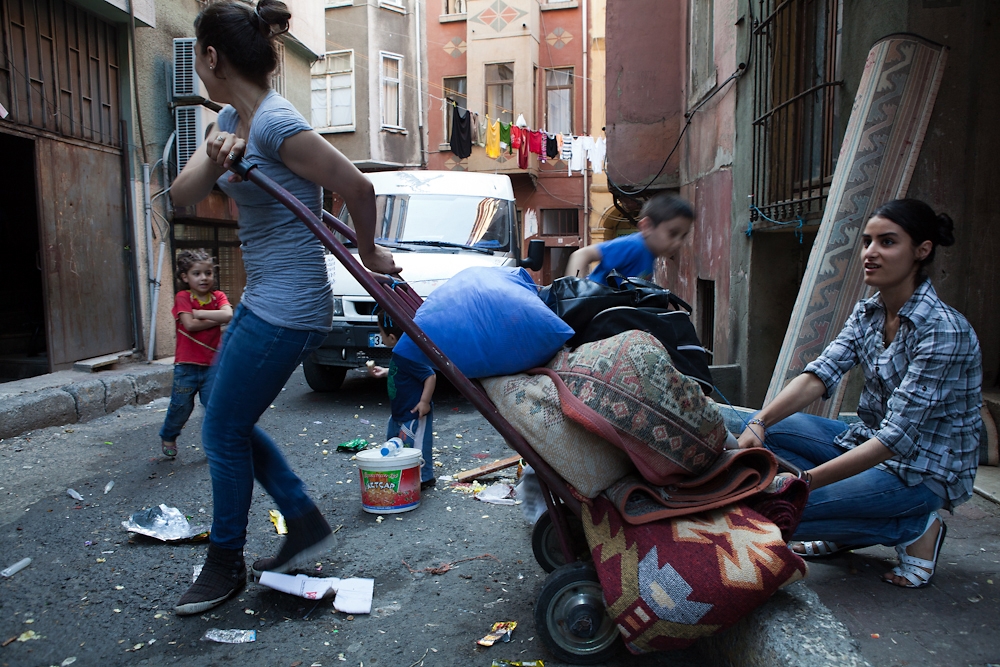 Residents move their possessions out of their Tarlabasi apartment. 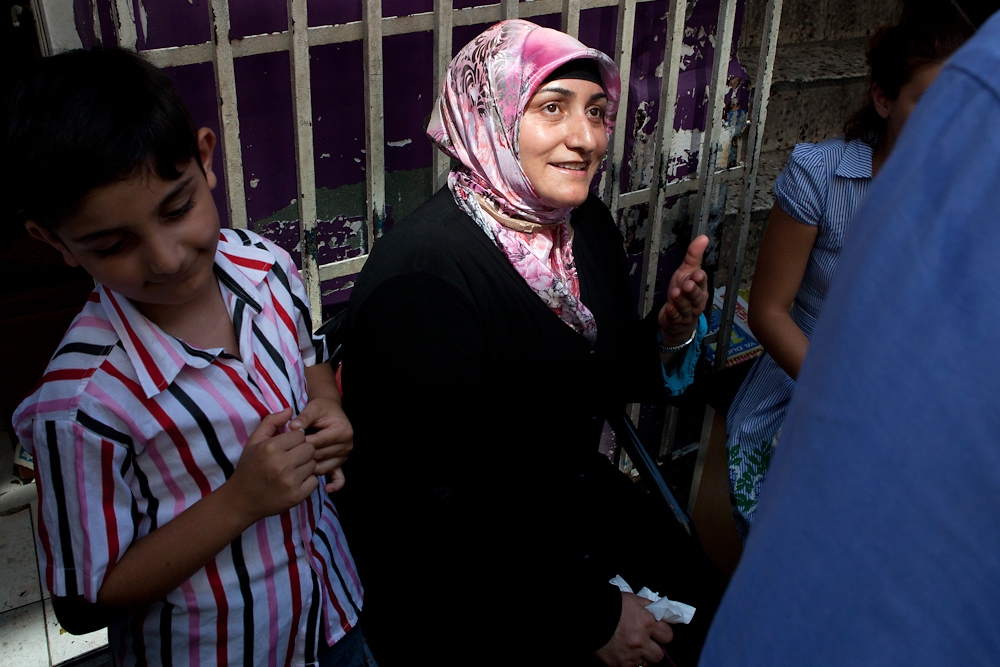 Besra, a widow with one son, said she signed a document allowing for repossession without being allowed to read it. 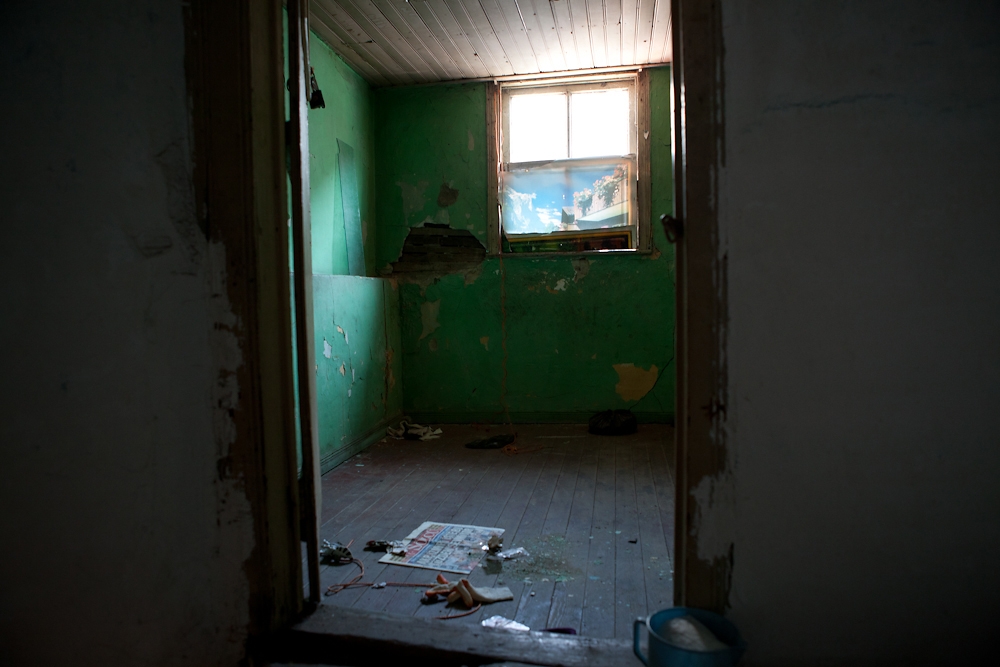 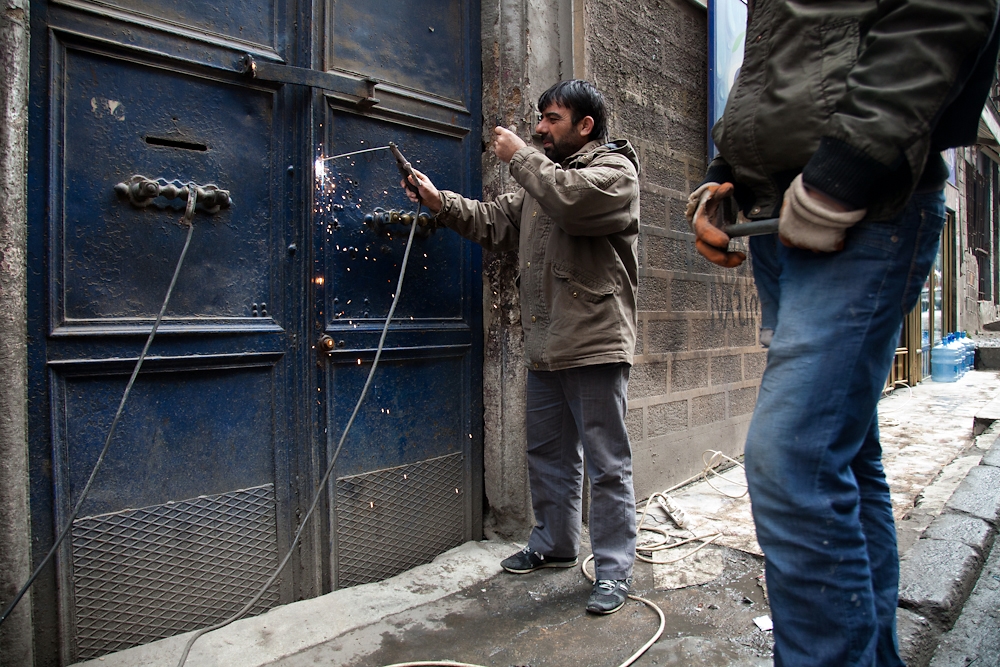 Workmen seal shut a door to prevent anyone else from regaining entry following an eviction. 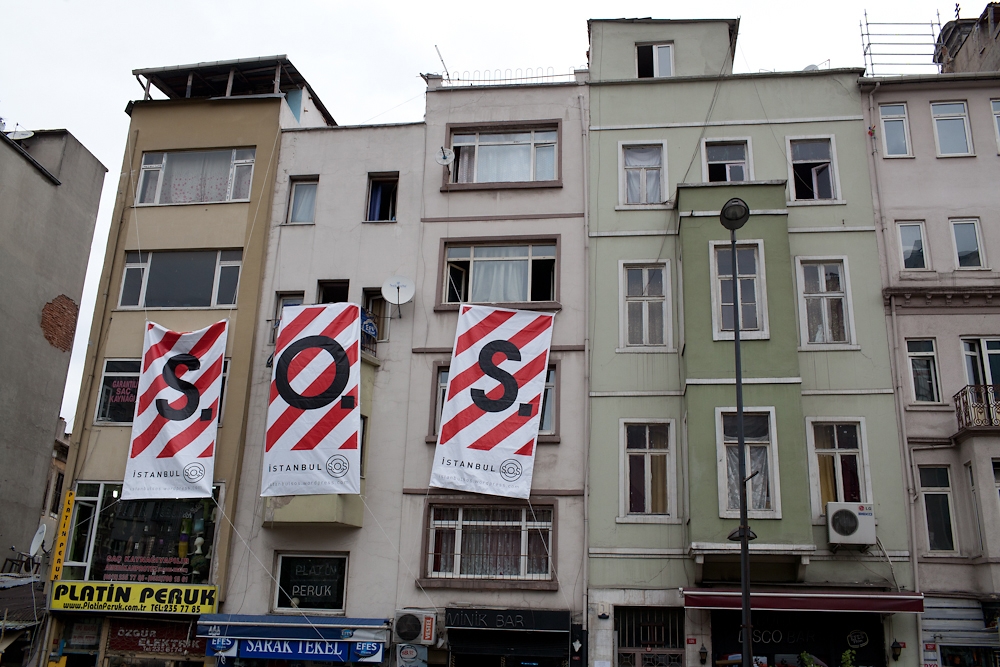 Activists protest against the development in Tarlabasi. 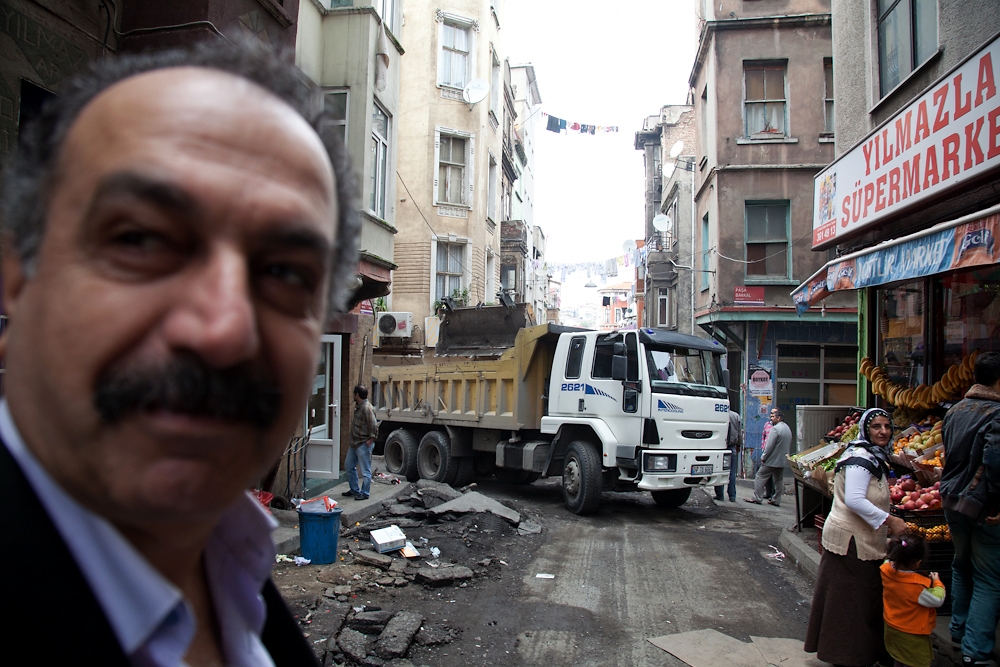 Utility upgrades leave many of the streets in Tarlabasi in disrepair. 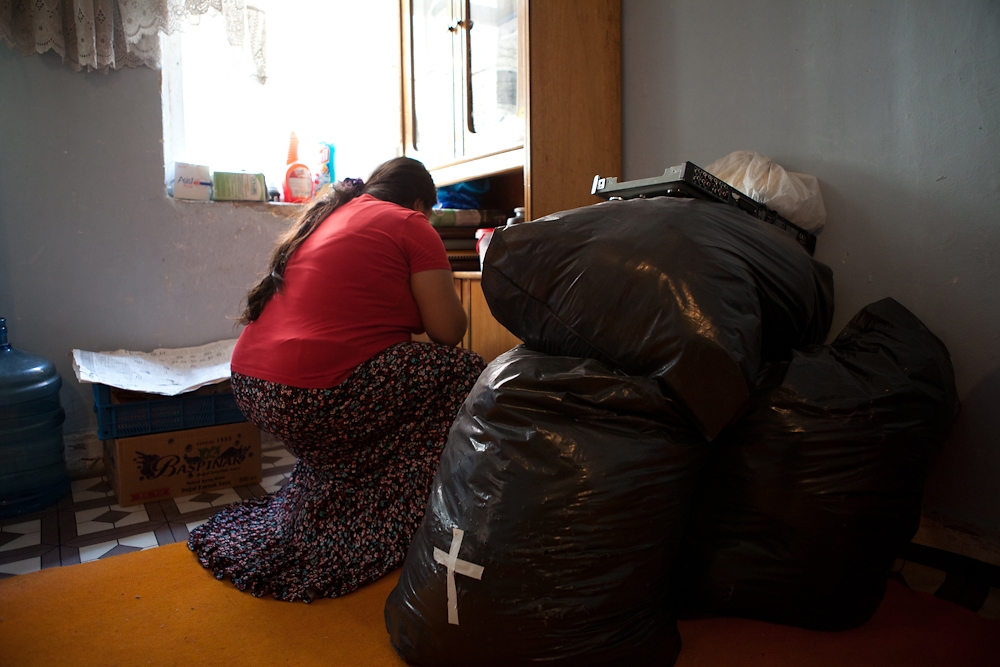 A family packs the last of their possessions into plastic garbage bags before leaving their apartment for good. 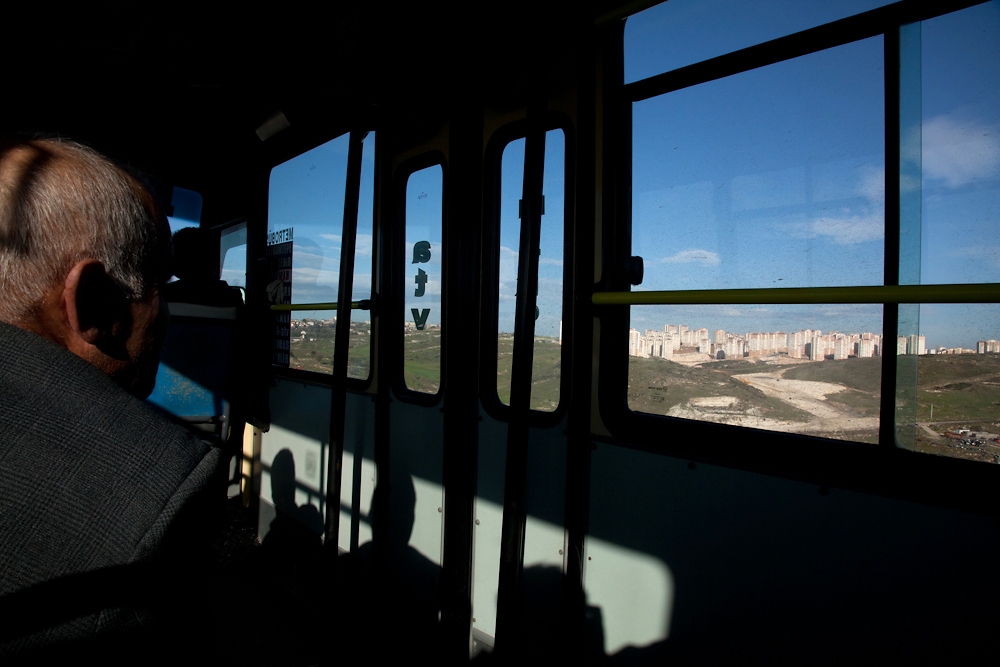 Kayabasi, a new government development on the outskirts of the city, is taking in many of the former Tarlabasi residents. 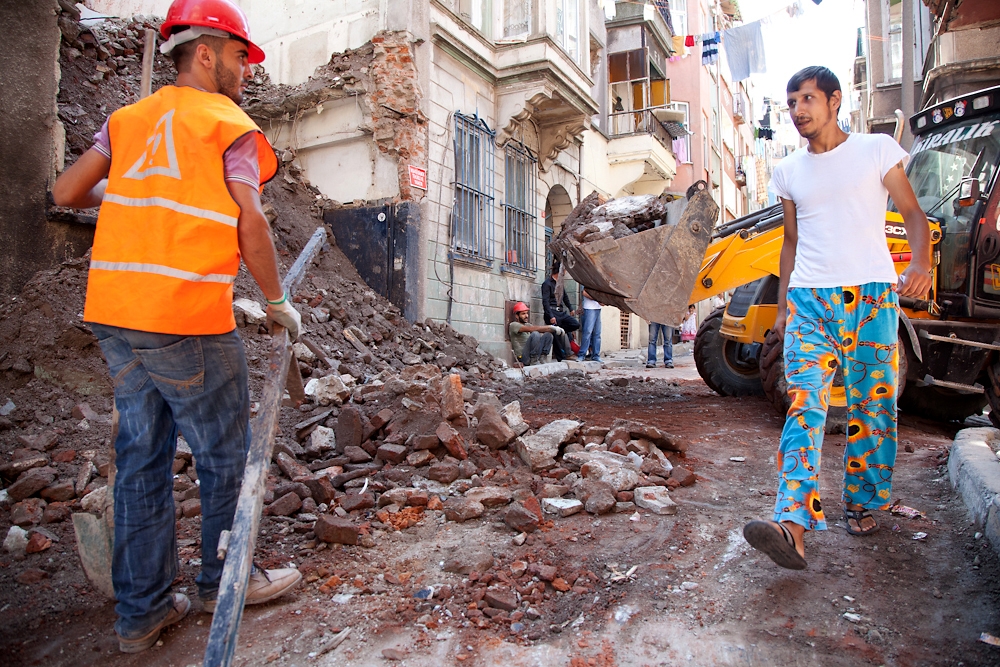 Residents see the demolition of some emptied buildings in the center of the district as a sign of intimidation. 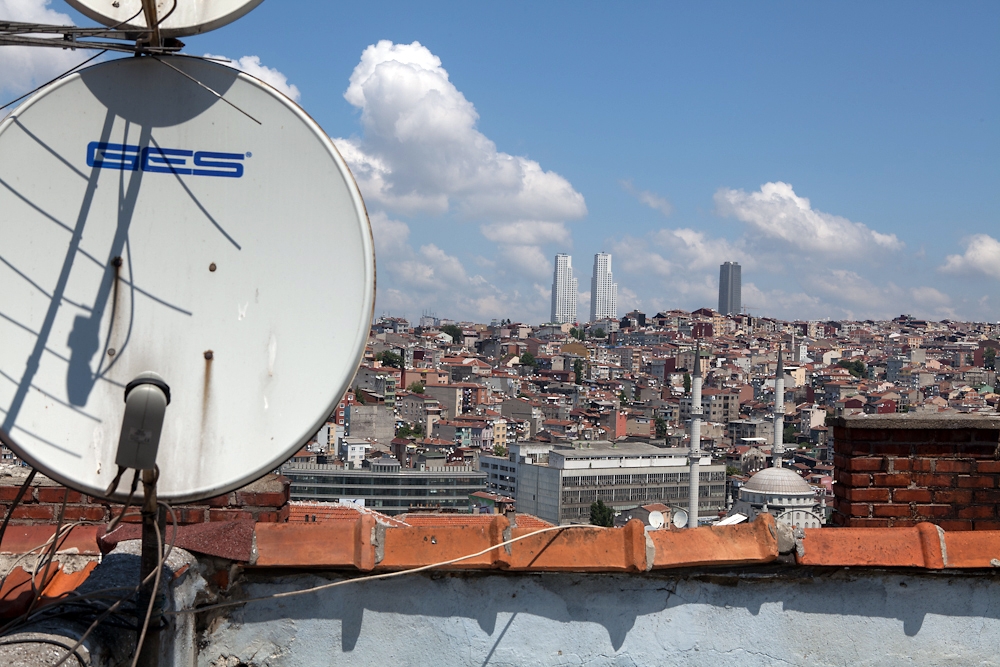 The new Trump Towers dominate the skyline view from Tarlabasi. 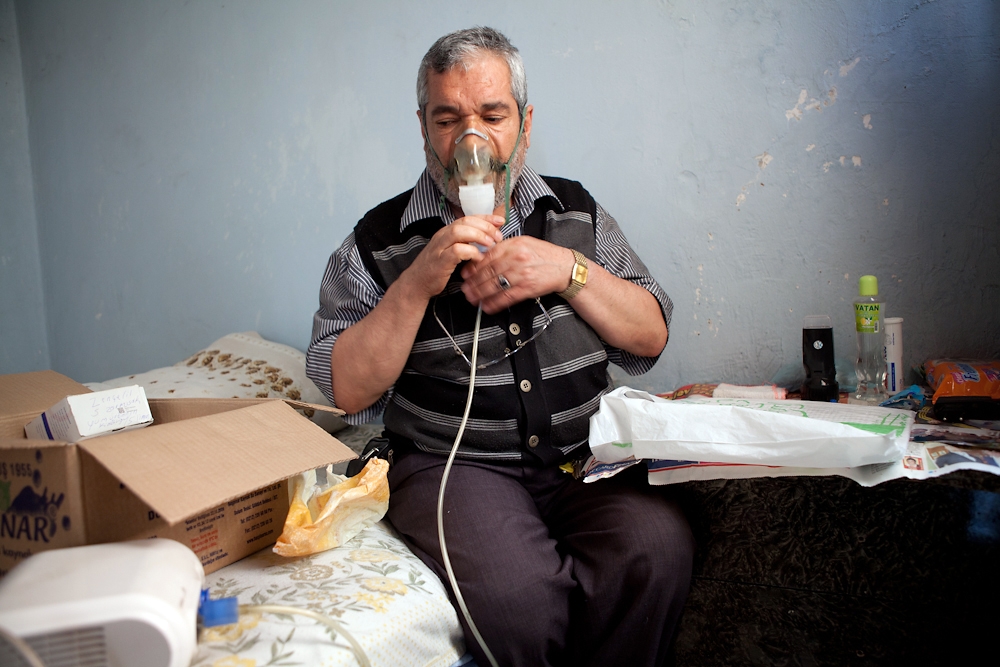 Esat has severe health issues, yet has had to battle with authorities to receive any assistance in moving his possessions. 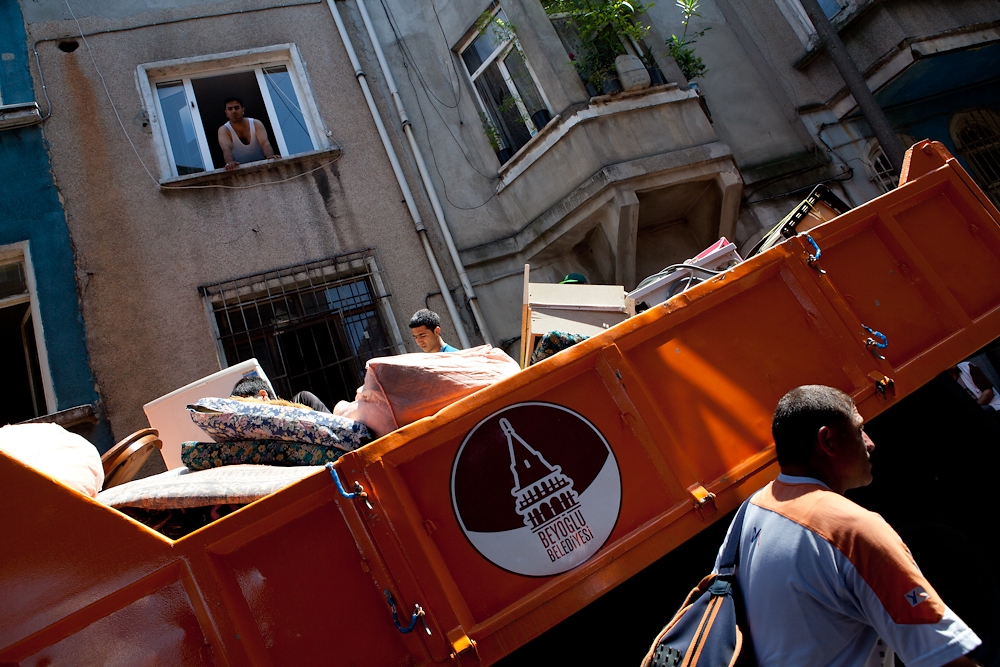 Municipality workers pack an open truck with the belongings from an evicted family. 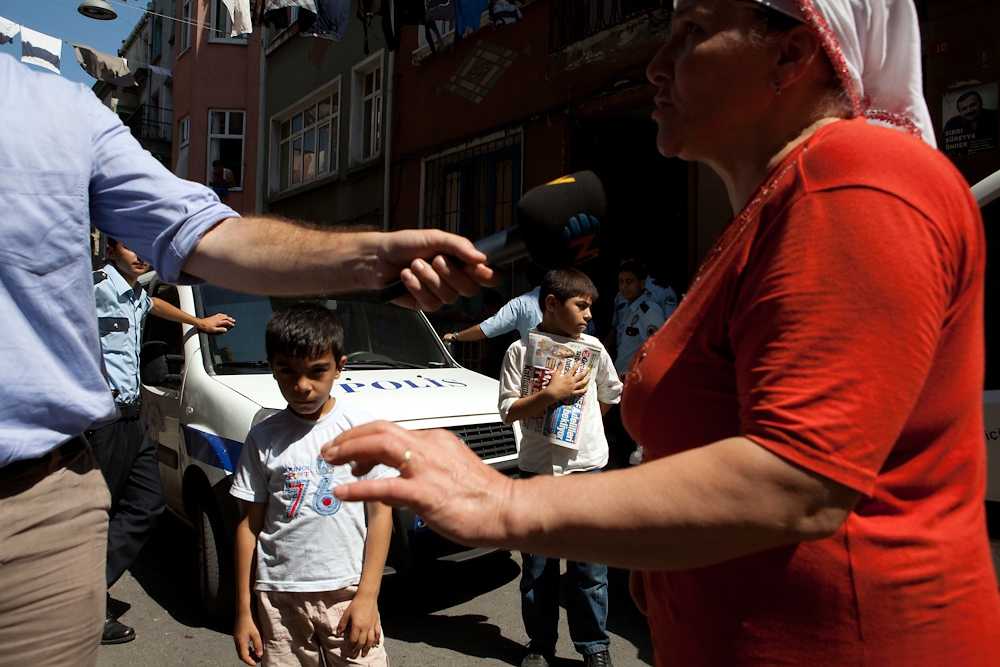 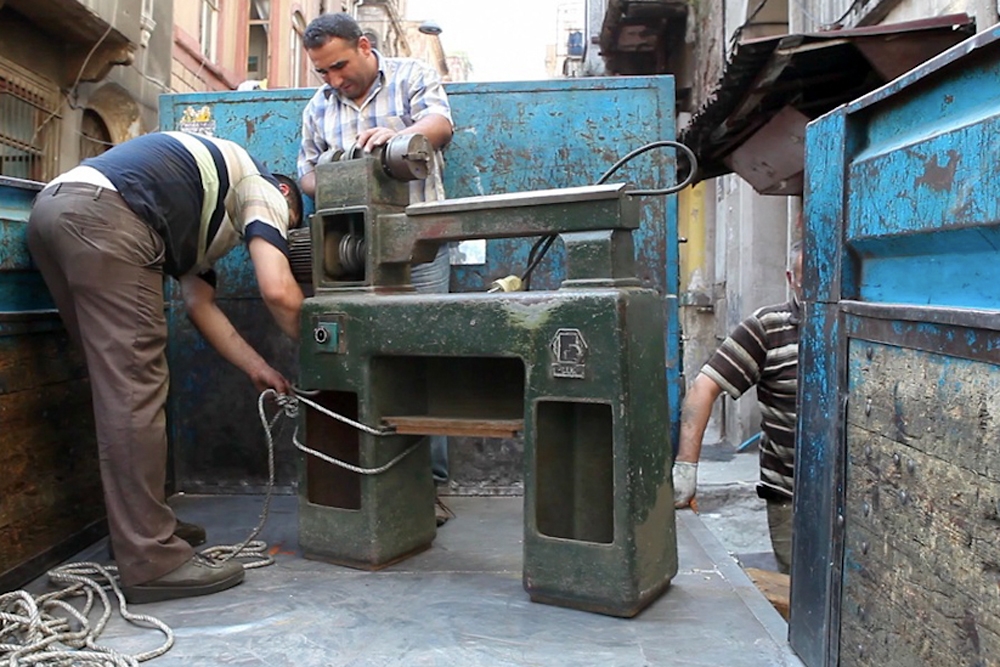 A metal company packs up their equipment and prepares to move their workplace. 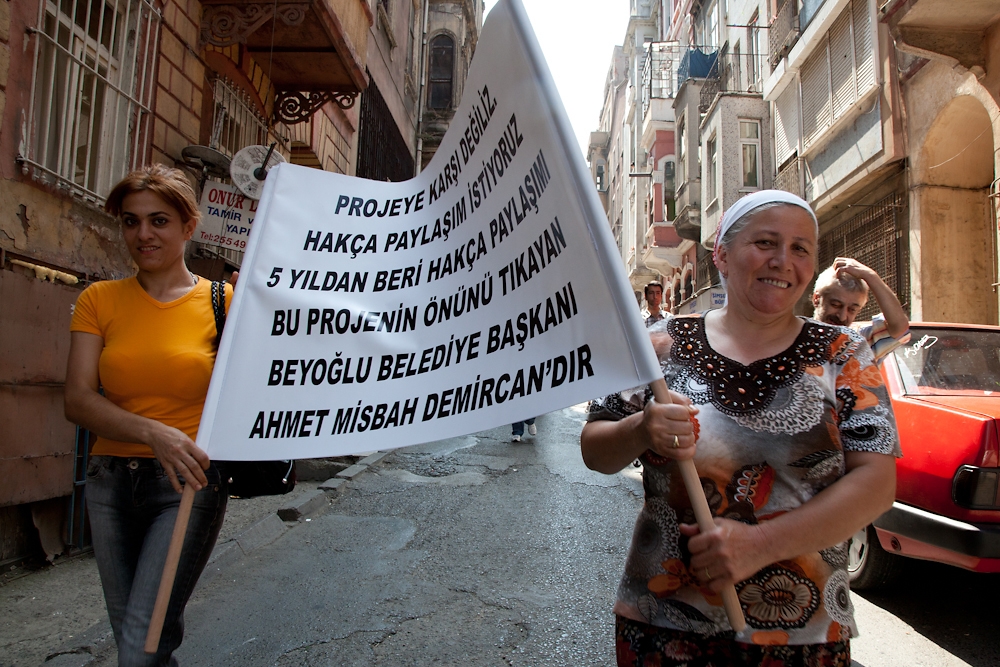 Tarlabasi residents protest the development and the loss of their homes and businesses. 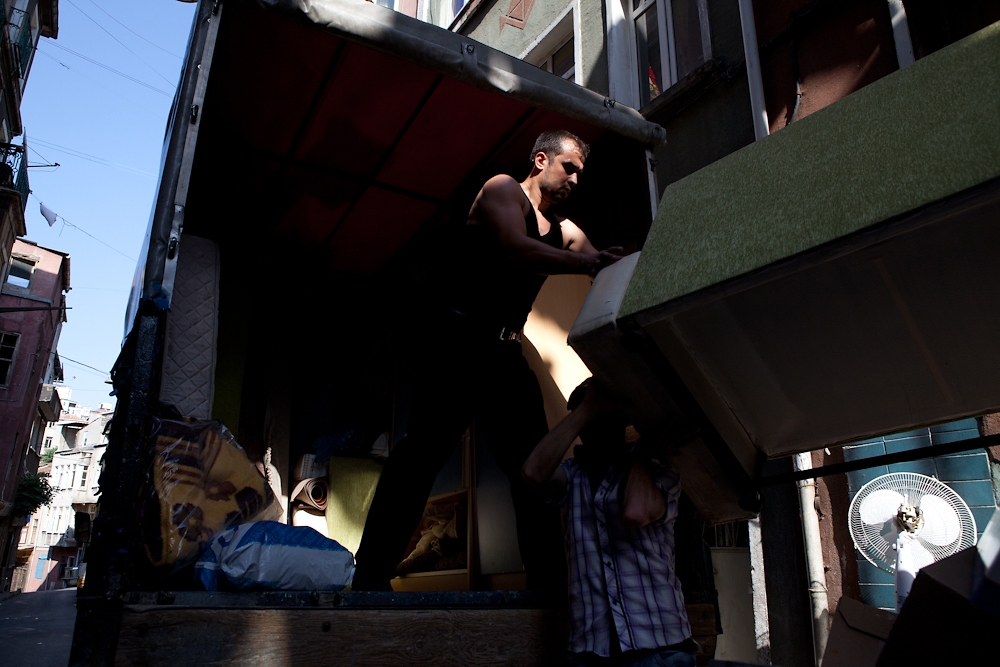 Municipality hired movers empty a house - either with or without the knowledge of the owners, who may be at work. 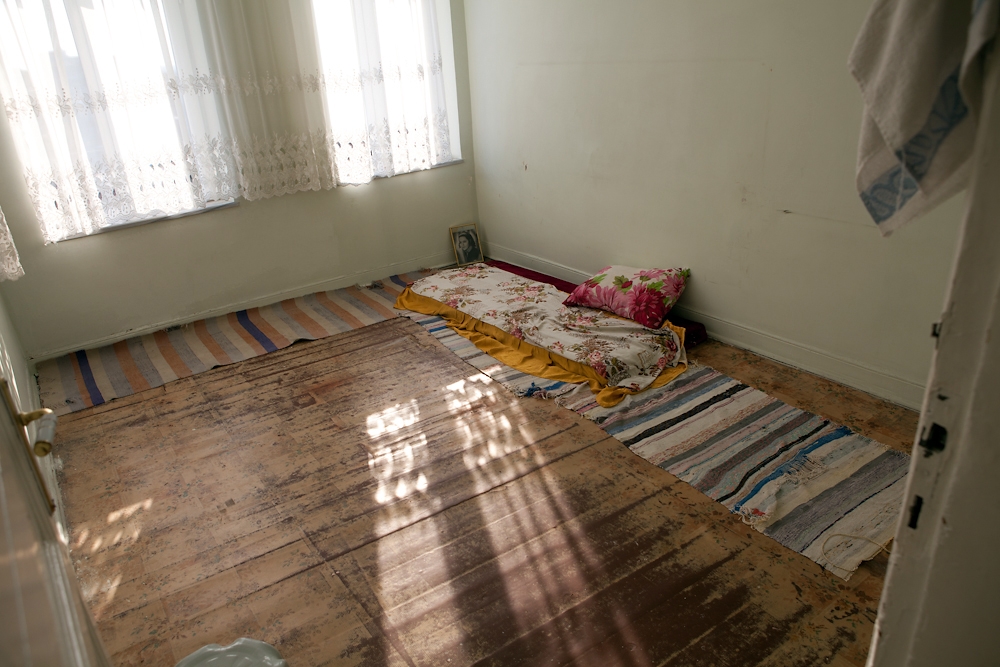 Days before their final eviction, residents pack everything away except for the bare essentials of bedding and a family memento.
prev
next

The June 12 election triumph of Turkey’s ruling Justice and Development Party not only signaled a political change. It also heralded the start of evictions within the central, working-class Istanbul neighborhood of Tarlabaşı to make way for an ambitious municipal government project to beautify the city.

The sight of the near-daily evictions leaves many of the Tarlabaşı residents who will not or cannot move -- for financial or other reasons -- feeling as if they are teetering on the edge of a precipice.

Standing outside a local courthouse, 40-year-old Tarlabaşı resident Bahattin Argis vented his anger at city officials for the helter-skelter nature of the evictions. “I am living in absolute uncertainty,” Argis fumed. “Despite being a house owner, I face the possibility of being thrown out of my own house at any moment!”

The Beyoğlu municipality that contains Tarlabaşı reportedly claims imminent domain over buildings slotted for destruction, even though the confiscated property is being sold to a private contractor. A spokesperson for the Beyoğlu municipality could not respond to questions from EurasiaNet.org about the eviction procedure in time for publication.

Argis, though, is not alone with his worries. Mine Erel, who bought the building where she has lived since 1977, worries about the safety of living in a semi-demolished neighborhood. “The municipality has evicted all the tenants in the neighboring houses. The house next to mine is in a state of total disrepair. What if there is a fire? What if the building comes crashing down?”

Bariş Kaşka, a lawyer representing about 100 plaintiffs in court cases against the city’s Tarlabaşı reconstruction project, calls the situation “a humanitarian drama.” Nobody is against the building renovations, Kaşka elaborated, “[b]ut my clients want to be part of [the] new project; they want to continue living in their neighborhood. [The municipality] cannot simply uproot all these people from a place they have lived in for at least 15 years.”

“The forced evictions disproportionally affect those groups most in need of protection; the urban renewal project violates the rights of these groups while it should respect and protect them,” specified Amnesty International’s Turkey researcher Andrew Gardner.

Transgender women are among those groups with few alternative options for housing. As is the case with refugees, Roma or Kurdish Internally Displaced Persons, Tarlabaşı is often the only place in the city where they can find a landlord willing to rent a flat to them, and at an affordable rent.

In a July 20 NTV Turkey television show, Beyoğlu Mayor Ahmet Demircan responded that Amnesty’s allegations about the evictions are “not true.”

Kadriye Sert, a 60-year-old Tarlabaşı resident of 20 years, alleges that the municipality pressured her husband, Mehmet, to sign over their apartment to the government’s project partner, developer GAP Inşaat. Promises of a nicer flat in a new apartment block also were made, she claimed.

In exchange for the couple’s spacious 160-square-meter flat, the GAP Inşaat offered the Sert family a 40-square-meter apartment inside the project area – for the additional price of 68,000 lira (about $39,059), to be paid in cash once the Tarlabaşı reconstruction project is finished. “We live on a modest pension,” fumed Sert. “We could never afford to pay such a sum! This basically means that we gave up our flat for free.”

Kadriye Sert recounts that city police came to the Serts’ flat and demanded that they leave immediately. “I started to cry and begged them to give me a few more days,” Sert recounted.

The retired couple now lives out of a few plastic bags while their new apartment -- a small flat in disrepair they found with the help of a former neighbor -- is being painted. The flat’s 500-lira (about $289) rent consumes almost all of the Serts’ monthly income of 600 liras ($347.26).

“I am tired of crying,” Sert sighed. “But when I look around my old flat, remember all the nice memories and all the work we put in it, I cannot hold back my tears.”