Turkey: Hanging “Necklaces in the Sky” for Ramadan 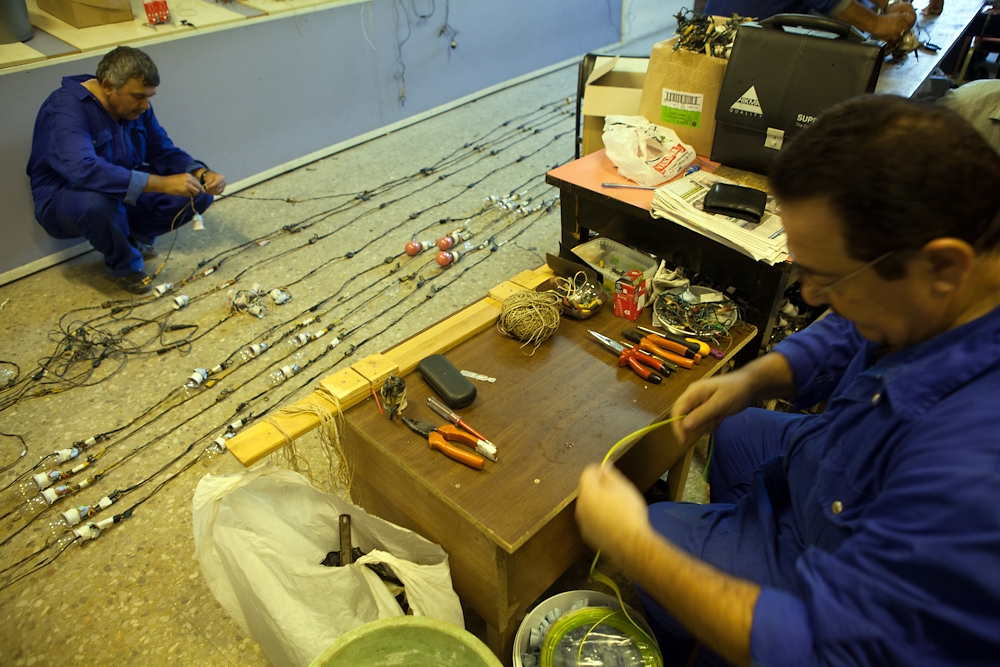 Electricians check and prepare the lights for the Suleymaniye mosque in Istanbul. 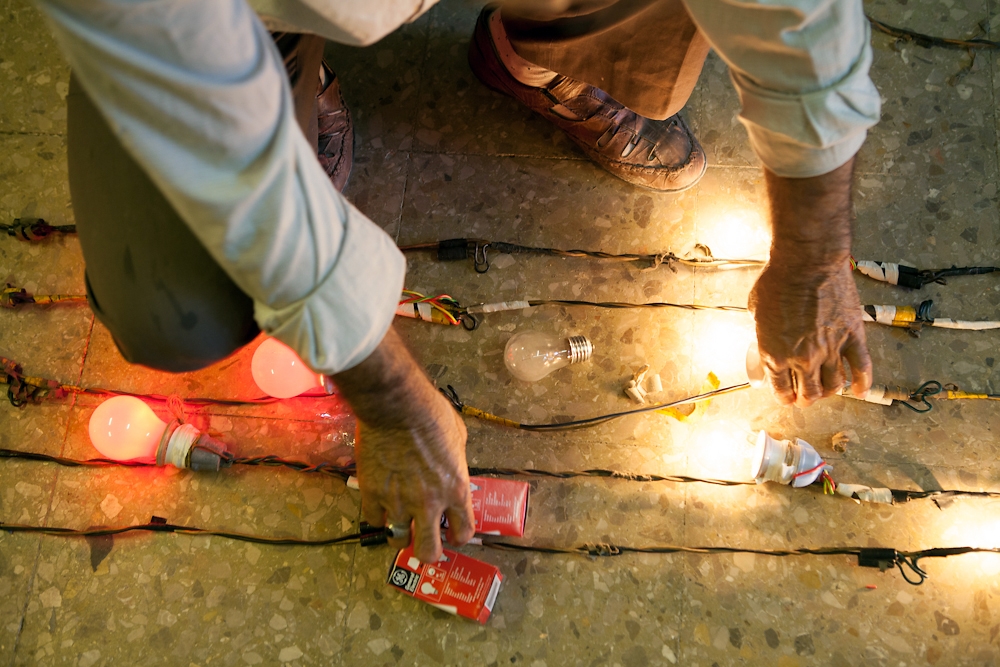 Red bulbs are used to signify the additional Turkish characters, the dots above the letters "ö" and "ü". 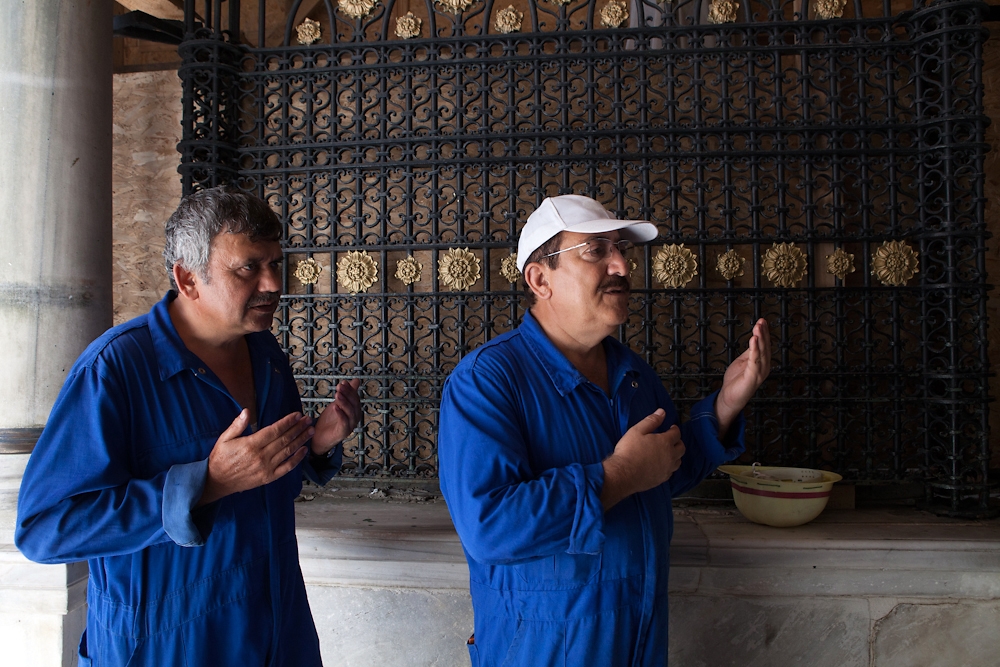 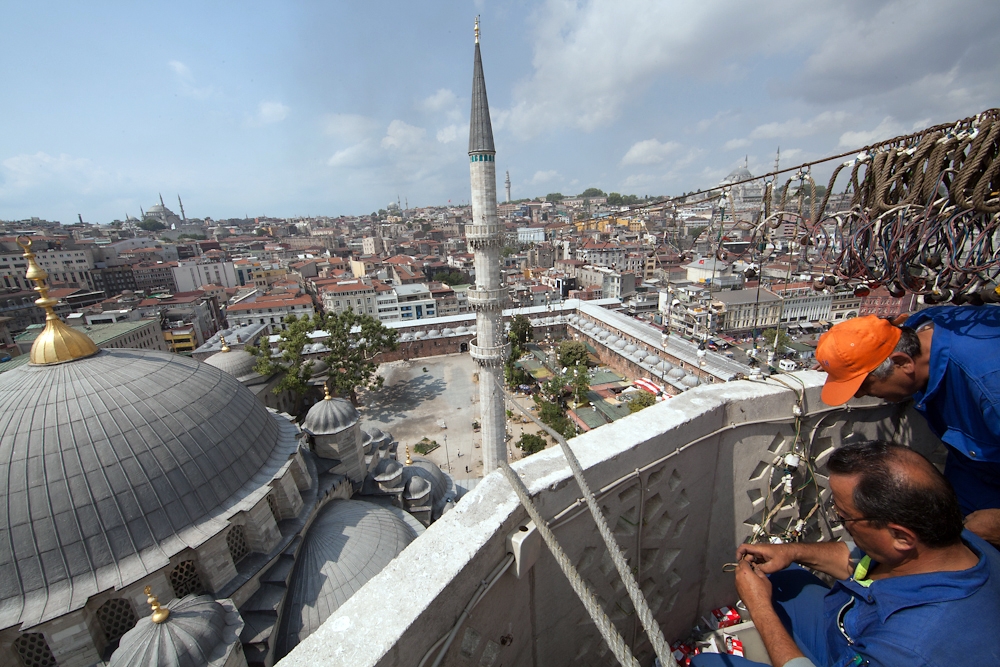 There are only six electricians remaining who make and install the lights at Istanbul's five major mosques. 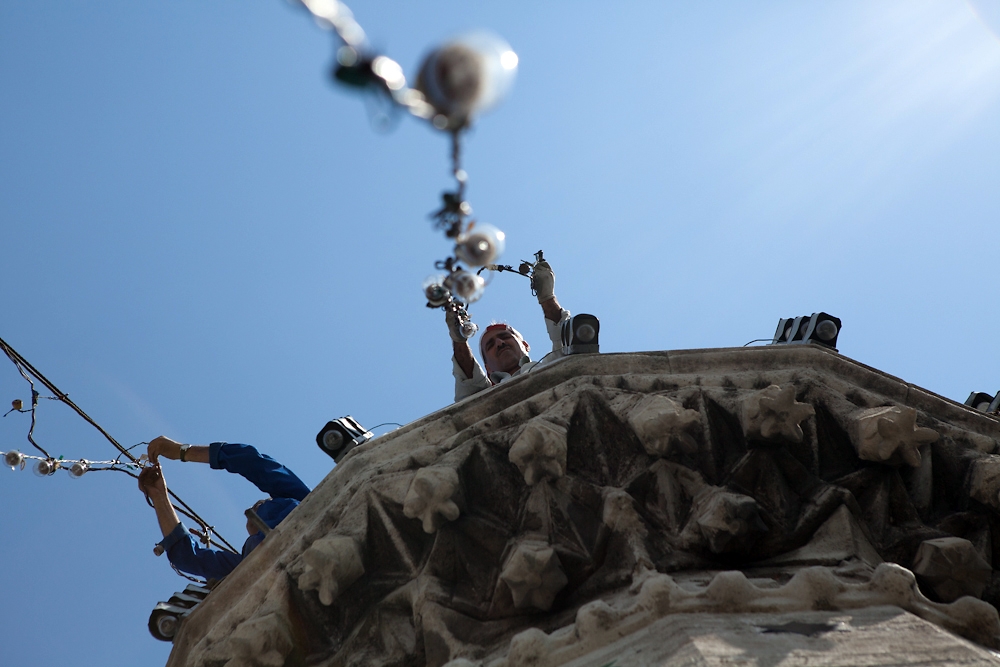 The electricians use both balconies of the minarets, dropping down the bulbs from the upper level to the lower. 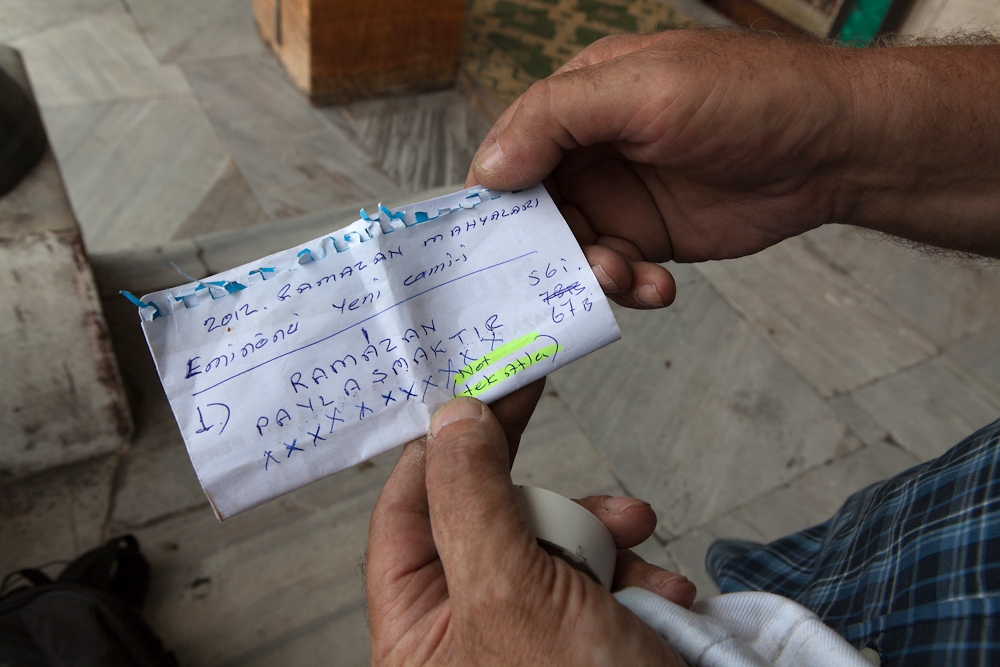 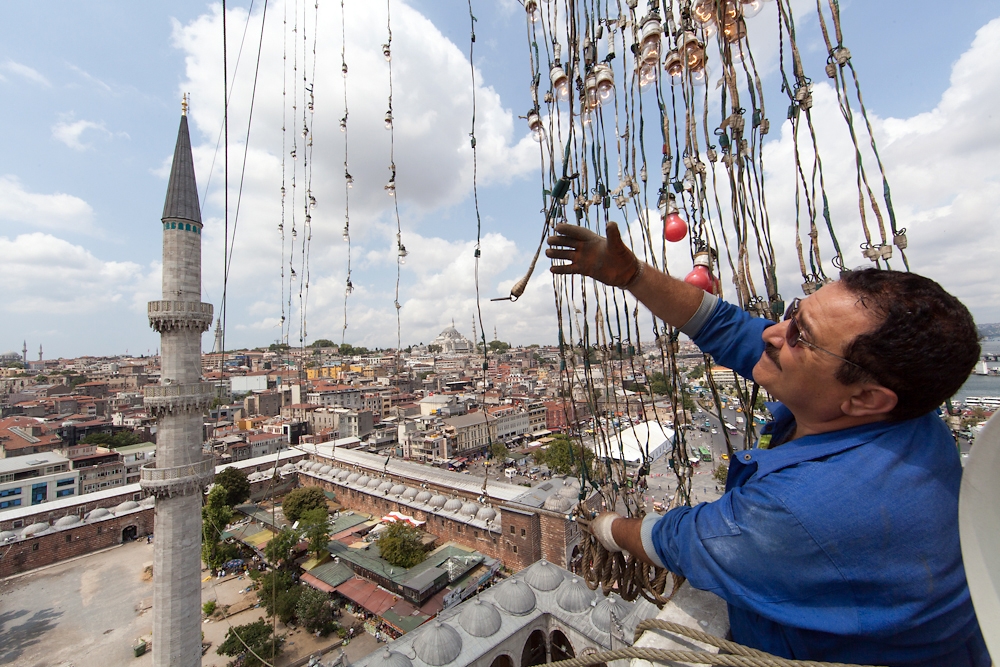 The bulbs are 15 watts each - any stronger and the words would blend into each other at night. 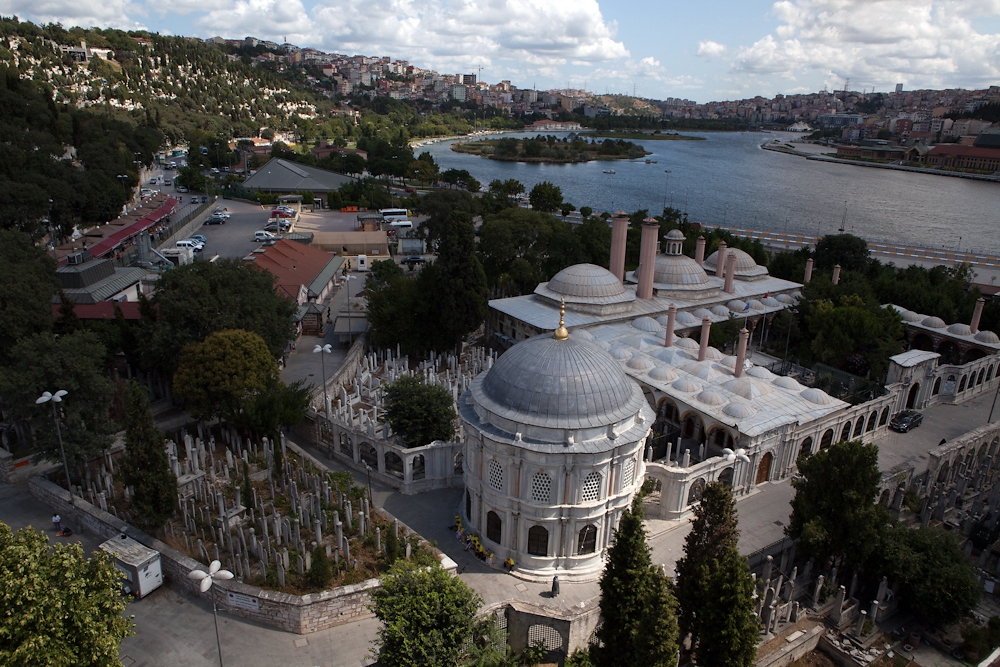 Constructed in the 13th century, the Eyup Mosque complex is one of the oldest in Istanbul. 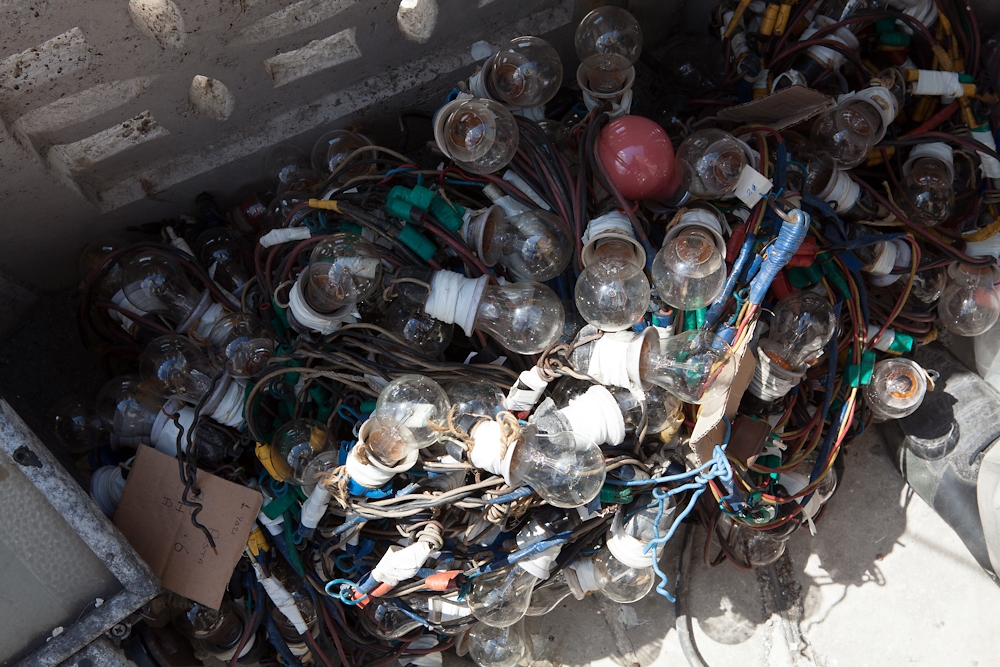 Each set of lights is custom made for each mosque because the distance between the minarets varies. 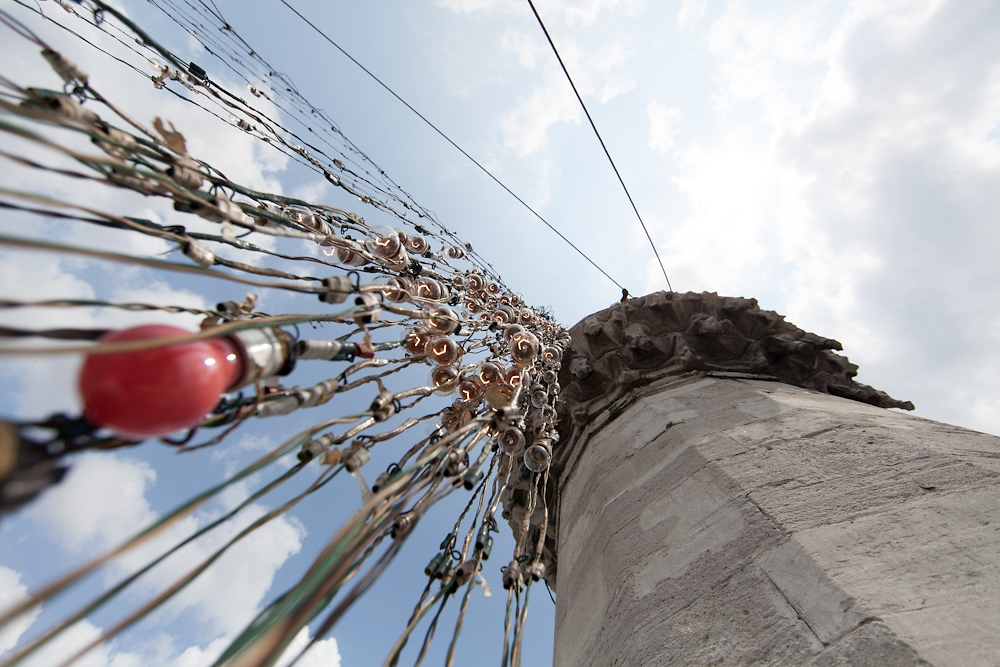 It takes up to four weeks to construct a single set of lights for a mosque, so they are used multiple times. 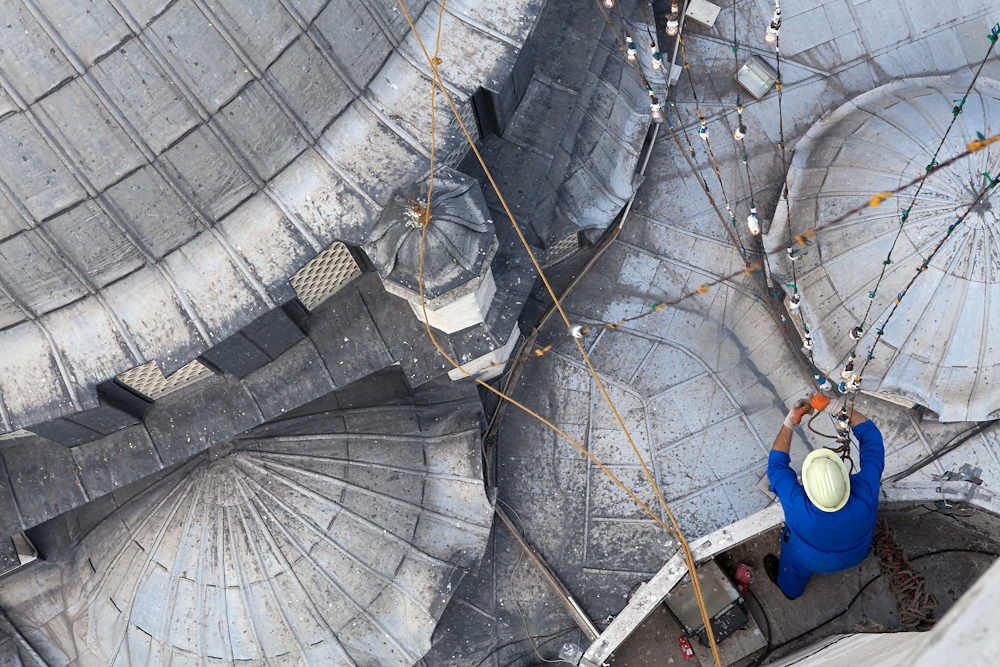 Lights have been hung between the minarets of the cities mosques for approximately 450 years. 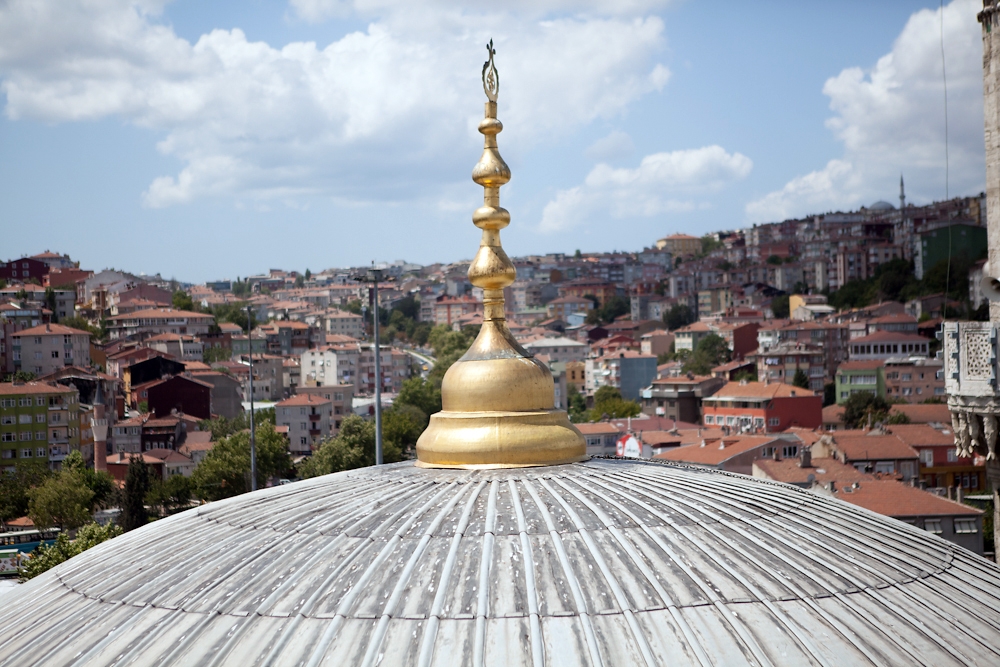 Eyüp Mosque holds the remains of one of the Prophet Mohammed's standard bearers. 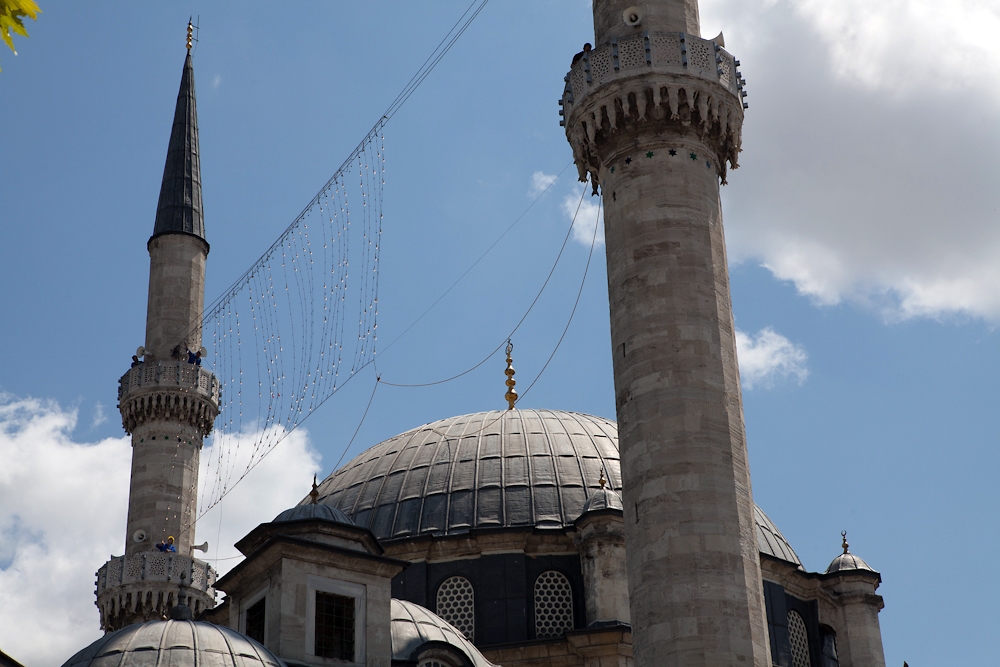 With electricians on both levels of the minarets, lights are pulled over from one minaret to the other using a pulley system. 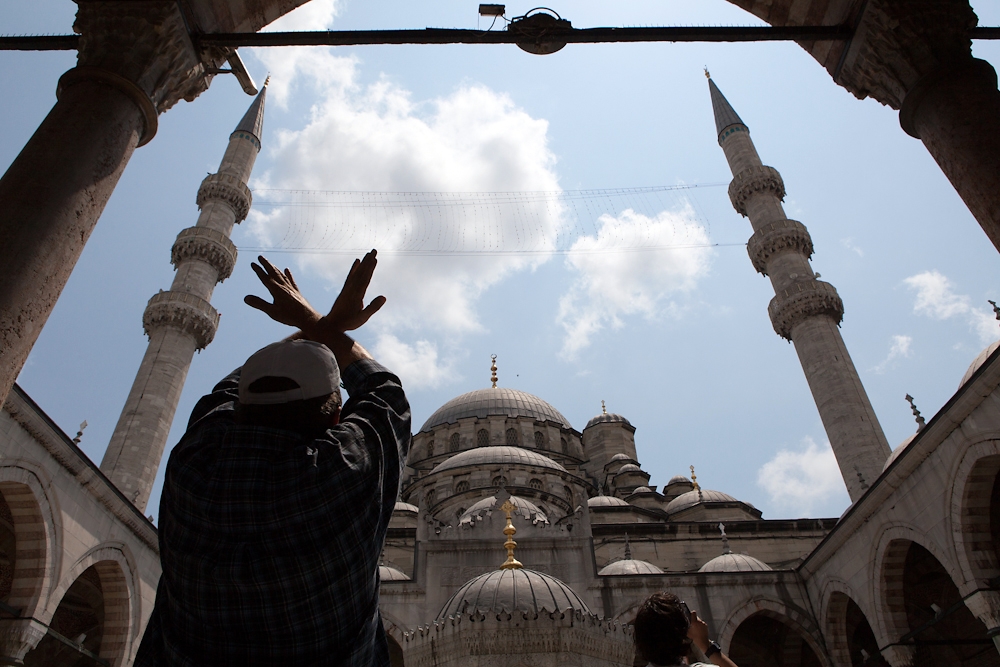 Kahraman Yildiz signals that the lights are now in the correct position. 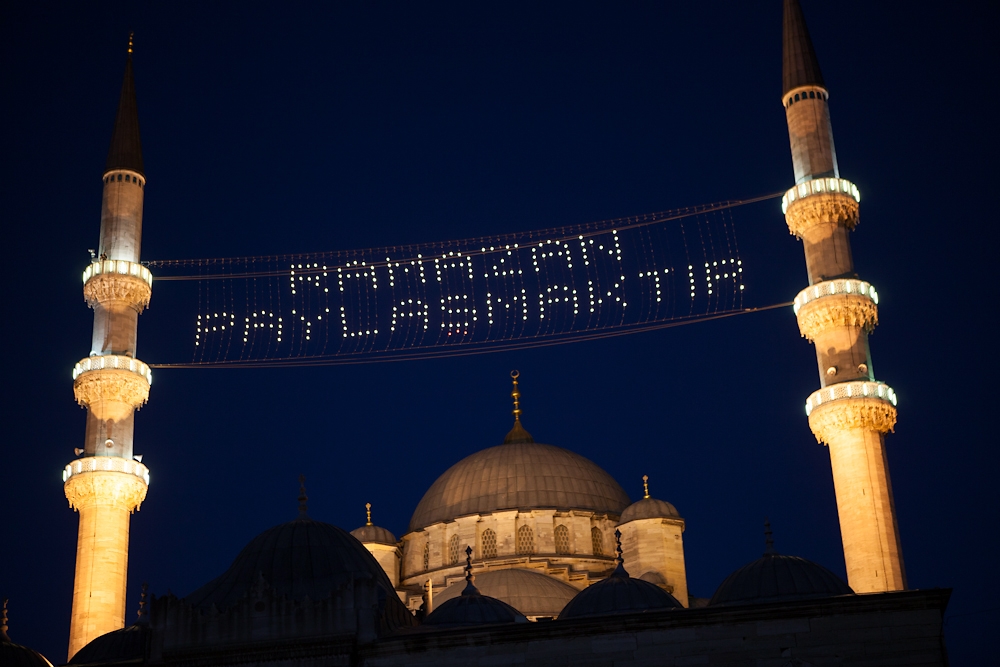 The lights are turned on for the first time on the evening before Ramadan begins. 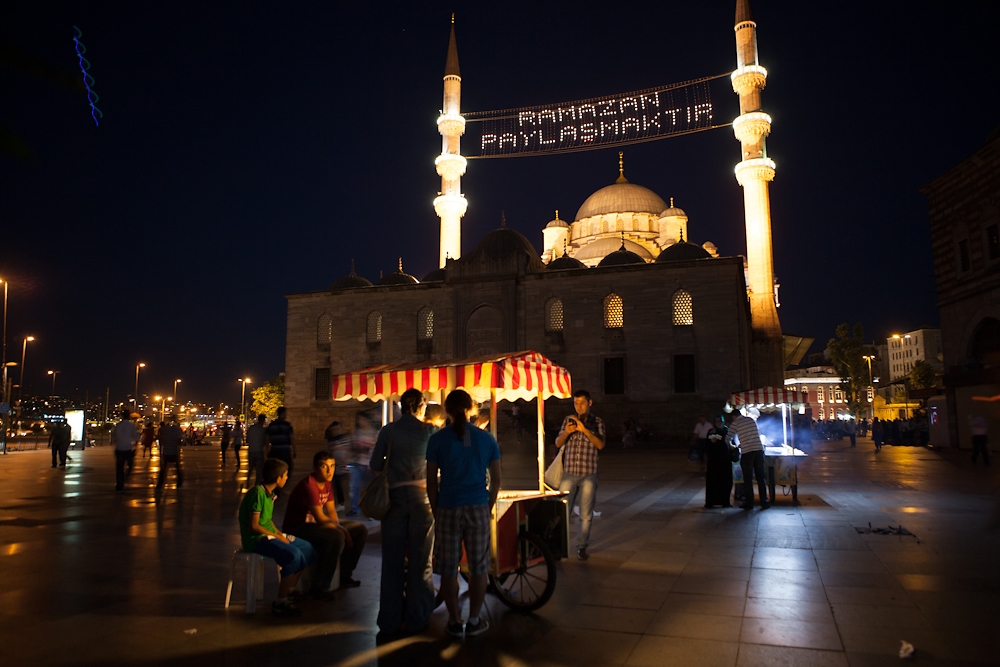 "Ramadan Is Sharing" the lights proclaim as locals mill about until late into the evening.
prev
next

Master electrician Kahraman Yildiz produces from his pocket a folded piece of scrappy paper. Its distressed state disguises the fact that it contains the phrases that are designed to illuminate Istanbul’s mosques during the holy month of Ramadan and inspire the city’s Islamic faithful.

The celebrated craft of “mahya,” meaning “writing in the sky,” is a distinct tradition of Istanbul, where lights have been hung between the minarets of city mosques for just under 400 years, dating back to the construction of the Blue Mosque in 1619.

Nowadays, electric light bulbs are used to form the mahya words, but from the 17th century until the early 1930s, oil lamps formed words in intricate Ottoman script or, sometimes, pictures of roses, aircraft or tulips, which could burn for four hours before the lamps’ oil had to be refilled. Each mosque had its own team of mahya masters; nowadays, a group of seven electricians install and maintain the light systems for the five main mosques in Istanbul that feature mahya.

This year, Ramadan commences July 20 in most Muslim nations, the following day in some places.

Master Süleyman, or “Süleyman usta” as he’s known in Turkish, has been performing this job since he was 18 years old. He is fully aware of his job’s significance. “People come from all over Turkey to see the mahya lights, because it is a Ramadan tradition and it makes people happy to see the lights in the sky," he explains.

Just this week, he has hung the phrases “Welcome, Sultan of the 11 months” (a reference to Ramadan being the most important month over the 11 other months in the Islamic calendar), at the Süleymaniye Mosque; and "Ramadan is sharing" at the 16th century Yeni Cami (“New Mosque”) in Istanbul’s central Sultanahmet district.

The messages, though, haven’t always been religious. In the 1920s, during the early days of the Turkish Republic, messages such as “Gambling destroys people,” “Do not forget immigrants,” “Consume domestic goods,” and “Take care of orphans” were run alongside “Morality is the basis of religion.”

From beneath Yeni Cami’s minarets, Master Kahraman crosses his hands over his head and signaled to his colleagues on the minaret balconies that the mosque’s lights are now symmetrically aligned. "I like my work,” he says with pride. “It's like hanging this beautiful necklace into the sky.”