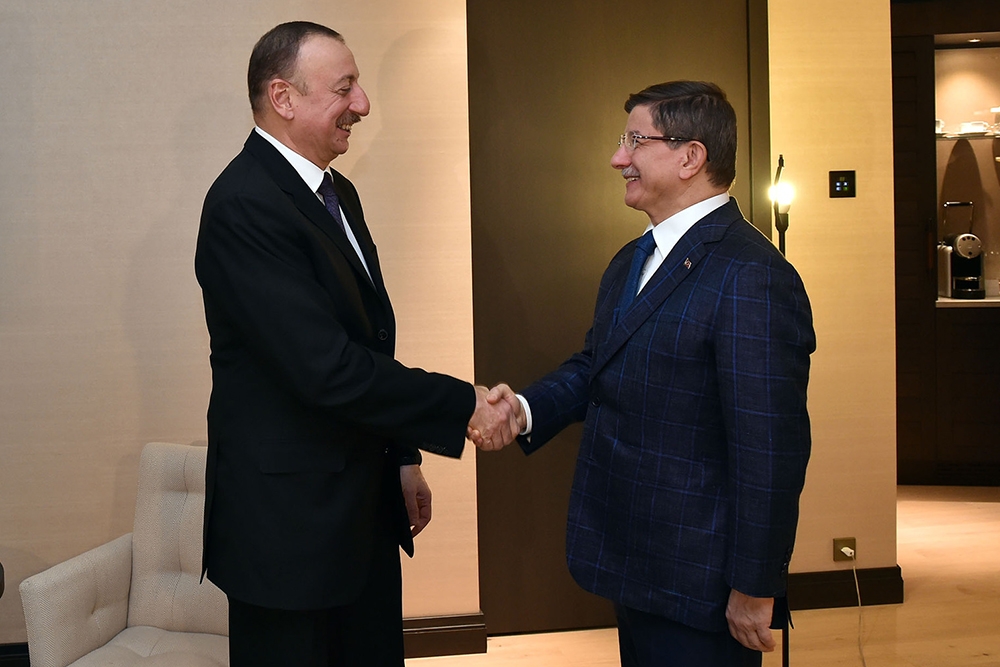 With Russian-Turkish relations bottoming out after Turkey’s downing of a Russian military jet last November, Ankara is scrambling to reduce its dependency on Russian gas. But the help it needs from post-Soviet energy producers may not be swift in coming.

The Caspian Sea state of Azerbaijan, Turkey’s closest ally in the post-Soviet region, was the first place Turkish Prime Minister Ahmet Davutoğlu visited after the November 24 downing incident. And most recently, Davutoğlu met with Azerbaijani President Ilham Aliyev in Davos on January 20.

“Two nations, one people” is a popular mantra that officials in both Turkey and Azerbaijan use to describe their relationship. And yet when it comes to energy, there seems to be limits to this unity.

For one, Azerbaijan is not the gas producer that Russia is. The 27 billion cubic meters (bcm) of Russian gas Turkey received in 2015 — 55 percent of its overall supply — is about 1.4 times the size of Azerbaijan’s entire volume of produced gas for that year, noted Ilham Shaban, director of the Baku-based Caspian Barrel, an energy research center.

Turkey currently receives 6 bcm of gas from Azerbaijan, an amount that constitutes about 75 percent of Baku’s annual exports, he added.

Some Turkish observers pin their hopes for energy diversification on TANAP (Trans-Anatolian Natural Gas Pipeline), the Europe-bound, 1,850-kilometer-long pipeline from Azerbaijan’s Shah Deniz field that will cross through Turkey. The two countries last month agreed to finish the conduit before 2018, its originally scheduled completion date, even though it is not yet known where all the gas to fill the new route will come from.

Although the first gas shipments to Turkey are expected by late 2018, large-scale shipments of 12 bcm per year will not come until 2021, said Shaban.

“We obviously can improve [the amount of gas sent] in the direction of Turkey,” he said. “But right now, it is not realistic, regardless of the situation.”

Revised completion dates for the pipeline and first gas deliveries have not yet been officially announced.

One Turkish energy analyst believes other factors may also affect Azerbaijan’s enthusiasm for deepening its energy relationship with Ankara. “It is no secret that, mainly due to regional political dynamics, Baku has been playing a balancing act in between Moscow and Ankara,” said Emre İşeri, an expert on regional energy politics for Yasar University in the Turkish city of Izmir.

That careful balancing act was spelled out this month by Azerbaijan’s ambassador to Turkey, Faiq Bagirov, in an interview with Turkey’s Daily Sabah newspaper, a governmental mouthpiece. “There is no other example for relations between Turkey and Azerbaijan” apart from “always” standing “together,” Bagirov stressed. At the same time, “Azerbaijan also has good relations with Russia, along with a strategic partnership.”

Baku has good cause to be careful. “There will be sensitivity in Baku not to be too confrontational with Russia,” argued Sinan Ülgen, a specialist on Turkish foreign policy and a visiting scholar at the Carnegie Europe think-tank in Brussels. “Russia is a major player in the region. It can hurt Azerbaijan indirectly in many ways, especially in the Nagorno-Karabakh conflict.” Indeed, tensions over the disputed territory have recently heightened between Azerbaijan and Armenia, Russia’s closest military ally in the region.

Shirin does not expect Baku to yield automatically to any Russian pressure to back off Turkey. “[I]n this situation,” he said, “Azerbaijan will do everything in its interest.”

Turkish and Ukrainian cargo blocked from Russia now travel via Azerbaijan to reach Central Asia. In early December 2015, to enhance this route’s attractiveness, Baku slashed transit fees for cargo traveling to Kazakhstan and Turkmenistan by 40 percent.

In Central Asia, a predominantly Turkic region that Turkey’s ruling Justice and Development Party has been cultivating for the last few years, a reluctance to become embroiled in Ankara’s tussle with Moscow is more apparent.

President Nursultan Nazarbayev of gas-rich Kazakhstan has taken Russia’s side in the conflict. Turkmenistan, another major energy supplier, has avoided commenting publicly, and officials in Ashgabat declined to make any public comments on energy relations when Turkish President Recep Tayyip Erdoğan visited the Turkmen capital in December.

Both Ankara and Baku have promoted the idea of a trans-Caspian pipeline from Turkmenistan to Azerbaijan, but energy expert İşeri cautioned that low energy prices, along with the lingering territorial squabble over the Caspian Sea, mean that “investors will think twice to make this kind of politically risky projects.”

Turkey also has gotten the cold shoulder from Kyrgyzstan, which does not export energy, but does receive an undisclosed amount of Turkish development aid. At December’s Moscow summit of Commonwealth of Independent States members, Kyrgyz President Almazbek Atambayev criticized Ankara for the downing of the Russian plane and suggested that Erdoğan, whom he previously termed “my older brother,” should apologize to Russian President Vladimir Putin.

Erdoğan made little effort to hide his displeasure. “If nothing else, it was an unfortunate statement,” a presidential aide, Ibrahim Kalin, remarked at a December 28 press briefing.