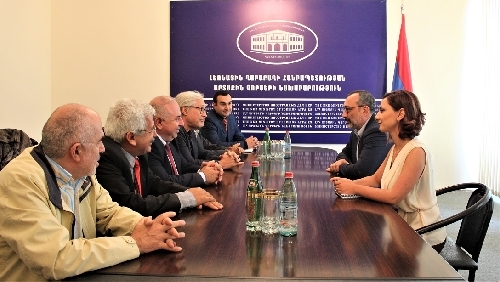 A group of Turkish leftist activists meet with the de facto foreign minister of Nagorno Karabakh on September 23. Turkey says it has opened a criminal investigation into the visit. (photo: nkr.am)

Turkey has opened a criminal investigation into four prominent intellectuals after they visited the disputed territory of Nagorno Karabakh, Foreign Minister Mevlüt Çavuşoğlu said, raising questions about whether Ankara could acquiesce to Azeri demands to extradite the Turkish nationals.

However, Uras, a former member of parliament from an opposition party, said he was unaware of any Turkish investigation and that he and the others had been summoned in October to give testimony to an Istanbul prosecutor at the request of Azeri authorities. Çavuşoğlu may have been referring to this questioning, he said.

The group in September visited Karabakh, internationally recognized as a part of Azerbaijan but under Armenian control since a 1994 war, in an effort to draw attention to a conflict that threatens regional stability, Uras told EurasiaNet.org. They also visited the town of Khojaly, site of a massacre of ethnic Azeris in 1992, to denounce the killings, he added.

“We went to better understand the situation and to [support] diplomacy for the issue, for it to be discussed at the table and settled peacefully,” he said. “Creating a taboo around this does not make it a matter that cannot be discussed.”

Çavuşoğlu told reporters in Baku that the investigation of Uras and the others should serve as a warning to others who might consider a trip to Karabakh. Baku regularly bars foreigners from Azerbaijan who have visited the mountainous enclave without official permission and reportedly blacklisted three U.S. lawmakers for a trip there in September.

“Entering Azerbaijan’s territory illegally is a crime. Karabakh especially is a sensitive situation. Like the seven other provinces, it is under occupation. Therefore when an investigation was opened in Azerbaijan, an investigation was also opened in Turkey. Legal proceedings have started, and a court has summoned these people for their testimony,” said Çavuşoğlu, according to the Turkish newspaper Hurriyet.

The foreign minister did not indicate whether Turkey would consider the highly unusual act of turning over Turkish nationals to Azerbaijan, which has issued an warrant for their arrests through Interpol, the organization that allows police to cooperate internationally.

The Turkish Foreign Ministry in September skirted questions over whether it would honor the extradition request, saying only that it supported Azerbaijan in the Karabakh conflict.

Çavuşoğlu said the men had contacted him to say they were unaware that their visit was illegal but he dismissed ignorance as a defense. “They are not primary school students after all,” he said. “Let this be a lesson. From now on, no one should go to Karabakh, which is Azeri territory, without permission. We cannot accept this, and neither can Azerbaijan.”

Uras said the Interpol warrant has restricted international travel for the four men.

“Our own government should be defending Turkish citizens. It is wrong that this kind of polemic is carried out in the press, by calling us primary-school children. Well, with the naivete of a child, we do support resolving this issue peacefully through dialogue,” Uras said.

Turkey maintains good relations with Azerbaijan, with whom it shares close linguistic and ethnic ties and on whom it relies on for oil and gas imports. Ankara severed diplomatic relations with Armenia and closed its border in 1993 in the wake of the Karabakh occupation.

“I believe that this issue was [Çavuşoğlu’s] offering during his visit. But Turkish-Azeri relations are very positive, and we support this. If the ban is lifted, we want to go to Azerbaijan to share our observations,” Uras said.