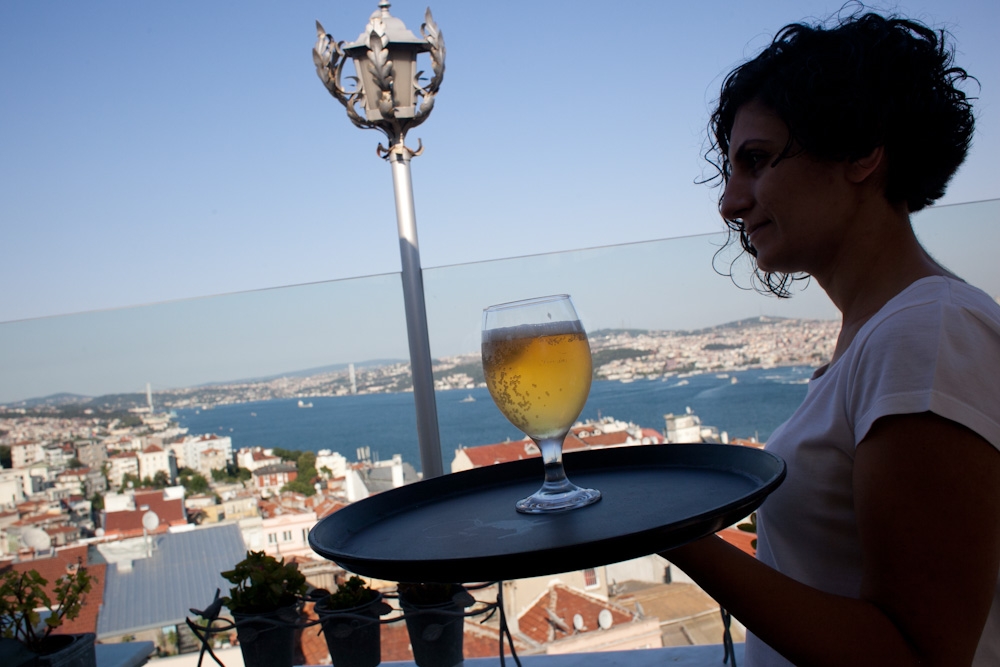 A waitress serves beer in one of Istanbul's cafes. (Photo: David Trilling)

The Muslim holy month of Ramadan, which concludes August 18, can be a time of heightened friction in Istanbul, when the beliefs of the pious clash with the lifestyle preferences of secular-minded Turks. This year, Ramadan has been marked by a secularist outcry over recent efforts to restrict the consumption of alcohol.

Tension erupted over a two-day international rock concert at Istanbul Bilgi University in mid-July that kicked off just before Ramadan began. Just half an hour before the concert an alcohol ban was enforced by University authorities under pressure from the Islamist-rooted ruling AK Party. Ironically the "One Love" concert was sponsored by the country's largest beer producer, but the thousands of parched rockers had to make do with lemonade and water instead.

The decision provoked an uproar. "This is not a battle about alcohol, but about freedom" wrote a leading columnist, Hasan Cemal, in the Milliyet newspaper on July 17. A nationwide debate ensued during the weeks of Ramadan over the direction of the country, and, in particular, its largest city, Istanbul.

The concert was held in the Eyup District of the city, which has a large religious community where Ramadan is strictly observed. The local authorities, dominated by the AK Party, defended the ban, citing the religious sensitivities of the locals. Yet in reality, local sensitivities in Eyup seem mixed.

"People in the neighborhood organized a petition to stop alcohol being sold at the concert," said a 40-year-old shopkeeper, who is fasting. "But I didn't sign it. Because I don’t believe you should interfere in other people's lives." A woman dressed in religious garb interjected, "This is a predominantly Muslim area. So the ban was necessary out of respect for us."

Representatives of the pro-secular main opposition People's Republican Party (CHP) in the Eyup District, sees the alcohol ban at the concert as part of a wider policy extending beyond Ramadan. The objective is to turn Eyup into a “dry” neighborhood, citing the closing down of the few remaining alcohol outlets. "Neighborhood pressure by religious people and the religiously controlled local authority are having a growing effect on secular locals," warned Inan Celiker a local CHP party official. "It's pushing people to drink illegally in the back of shops."

"Neighborhood pressure," a phrase coined by one of the country's leading sociologists, Serif Mardin, is becoming a major factor in the civic debate. Mardin maintains that more than any deliberate policy by the Islamic-oriented government, pressure in areas where the majority are pious, forces secular people to adopt a more religious way of life.

The devout Prime Minister Recep Tayyip Erdogan has waded into the controversy. "They want all our youth to be alcoholics. What on earth is this? I told the university authorities we were upset over the festival. For Allah’s sake, how can this occur? Can anyone allow alcohol to be sold on a school campus? Will the student go there to get drunk on alcohol or find knowledge?" Erdogan declared during a late July television interview.

Following that verbal broadside, Istanbul Bilgi University authorities announced that alcohol would no longer be served at future concerts on campus.

Istanbul is home to some of Islam's most important mosques, along with a large pious Muslim population. But it's also famous for its vibrant nightlife with its bars and restaurants that have long been part of the city’s fabric. Meyhane restaurants serving tasty tapas-like dishes, accompanied by the national drink of raki, a potent aniseed spirit, date back to the 19th century.

And fears are growing that Istanbul’s delicate balance is reaching a tipping point.

Even in areas long associated with foreigners and Western ways, pressure is mounting against those who like to consume alcohol. On the night of August 14, for instance, Beyoglu authorities removed bar and restaurant signs, claiming that such signage was incongruent with the historical appearance of the area. "In Beyoglu, they [authorities] don’t say [anything] directly, but the right to drink alcohol in public places is diminishing, and that is an entertainment area,” said Gokhan Tan, a media studies teacher at Istanbul Bilgi University.

While neighborhoods controlled by AKP members are tightening restrictions on alcohol, in sectors of the city controlled by the pro-secular CHP there's been an explosion in the number of bars, in particular meyhanes. In the Kadikoy district on the Asian side of Istanbul, for example, dozens of bars and restaurants have opened in the space of a year. People sit drinking beer and raki and eating day and night, even during the holy month of Ramadan. A significant number of people are willing to commute to such neighborhoods in order to enjoy a drink. "It's 25 km from here to where I live. But I can't drink in my neighborhood, so I come all the way here for alcohol. Does that make sense to you?" one customer at a Kadikoy bar said.

Influential Islamic intellectual Hayrettin Karaman sees voluntary segregation as a way to defuse tension over Istanbul's different ways of life. "Those who don't believe in Islam can freely live according to their own beliefs. But if this kind of living will negatively affect the life, morality, religiousness and the education of new Muslim generations, measures need to be taken to create ‘special regions’ for their improper actions," Karaman wrote August 12 in the Islamic Daily Yeni Safak.

"Now, we live with many people side by side in an apartment building, on a street, in a neighborhood, from gays to drunks, to unmarried couples,” Karaman continued. “A Muslim won't like these actions, they hate them and if there is opportunity, he keeps the intention to correct and prevent these actions."

For Tan, the Bilgi university professor, Karaman's words are a depressing, but a prophetic prediction for the future of Istanbul. He fears voluntary segregation is already replacing tolerance.
"We feel that our lives are being confined to parts of the city, this is your area and this your area,” Tan said. “It's not a good thing, we are all the same people, but we can have different feelings, different beliefs and different lives. We live in the same city, but why should I restrict myself to only my neighborhood."