Turkey: Is Law Being Rigged to Help Azerbaijan’s SOCAR? 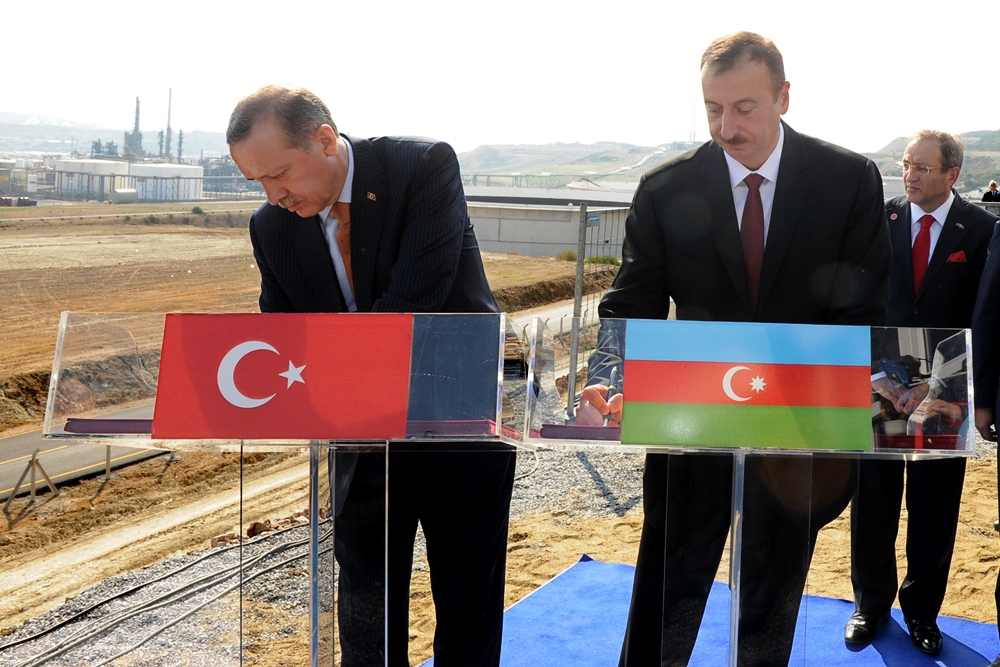 A legal dispute continues to stall a refinery project agreed upon by Turkey and Azerbaijan in late 2011. (Photo: Azerbaijani Presidential Press Service)

A David-and-Goliath legal battle between Azerbaijan’s state oil company and a small energy firm is placing Turkey’s legislative system under a spotlight, and is stoking an already existing debate over rule of law in the country.

The dispute centers on a $5.5-billion oil-refinery project spearheaded by the State Oil Company of the Azerbaijani Republic (SOCAR), a critical partner in Turkey’s drive to serve as the energy bridge between the European Union and non-Russian energy producers.

SOCAR expects to invest $20 billion in Turkey overall by 2018. Ankara has said the company’s planned STAR refinery would provide one of the country’s largest sources of foreign direct investment, and would help reduce Turkey’s trade imbalance -- a key weakness in the economy -- by reducing its dependence on imported fuel.

But one key obstacle exists – a Turkish geothermal venture, Buhar Enerji, already holds the rights to the refinery’s chosen construction site not far from the Aegean city of Izmir.

So far, SOCAR’s legal maneuvering to wrest those rights from Buhar has failed. The STAR refinery’s opening date consequently has been pushed back: it’s now projected to begin operations in 2017, though most observers believe 2019 or 2020 is more likely.

A law passed in February prompts many observers to believe that the Turkish government is intervening to resolve the four-year-long legal dispute in SOCAR’s favor. The legislation, dubbed the “SOCAR law” by Turkish media, gives a panel of three government ministers the right to cancel geothermal licenses that clash with infrastructure or energy projects “in consideration of the public good and the needs of the economy.”

Economic analyst Emre Deliveli and other observers argue that SOCAR’s close ties with the government make the law look “suspicious.”

“SOCAR is basically part of the family, as far as the government is concerned,” Deliveli said. In October 2011, Turkish Prime Minister Recep Tayyip Erdoğan and Azerbaijani President Ilham Aliyev attended a groundbreaking ceremony at the refinery’s planned construction site, near the town of Aliaga.

A spokesperson for Turkey's energy ministry was unavailable for comment about the motivations behind the law. SOCAR’s effort to cancel Buhar’s geothermal operating license is now due to be heard in the Council of State, Turkey’s second highest legal authority.

Kenan Yavuz, the chief executive officer of SOCAR’s Turkish subsidiary, told EurasiaNet.org that the energy giant plans to apply under the new law to get Buhar’s license cancelled. “We expect the committee renders its decision in our favor since Buhar Enerji’s project is not eligible for a geothermal plant and our refinery project favors the public interest more than Buhar Enerji’s project,” Yavuz said.

Yavuz claimed the geothermal reservoir in the project area is not sufficient for commercial exploitation. Since Buhar’s license covers a much larger area than the refinery site, it can be used elsewhere, Yavuz added.

Buhar Enerji declined to comment. However, a source close to the company, speaking on condition of anonymity due to the ongoing legal proceedings, disputed Yavuz’s claim.

The source indicated that the best sites for access to the geothermal reservoir and construction of a power plant are similar to where SOCAR intends to build its refinery. Buhar Enerji’s $180-million plant would generate 50 megawatts of electricity per year.

Yavuz acknowledged that campaigning by Buhar has caused delays to the project’s financing, but SOCAR Türkiye denies it has any problem raising capital for the project. In the past week, however, both the International Finance Corporation (IFC) and the European Bank for Reconstruction and Development (EBRD) withdrew planned contributions of $150 million each for the refinery.

An IFC spokesperson told EurasiaNet.org that its decision, announced on March 17, was “due to differences in the inter-creditor policies of the various lenders involved.” The EBRD declined to comment about the reasons for its own March 14 decision.

Growing pressure from several civil society groups may also have played a role.

On February 14, a group of international non-governmental organizations, including Greenpeace, Friends of the Earth and Bankwatch, wrote to would-be lenders urging them not to finance the project.

In the letter, the NGOs accused SOCAR of failing to disclose to lenders an allegedly “secret” 1,335-MW coal-fired power plant that would run on lignite and petro-coke tailings from the refinery.

Funding such dirty-energy projects runs counter to EBRD guidelines, but neither EBRD nor the IFC has implied that pressure from the NGOs has any link with their decisions to cancel financing for the refinery.

SOCAR Türkiye’s Yavuz told EurasiaNet.org that the coal plant was at an early stage of planning, and not related to the oil refinery.

David Tonge, director of IBS, an Istanbul-based energy consultancy, doubts that the funding setback will derail the refinery’s construction. “The withdrawal of EBRD is unlikely to kill the project, but means that bank funding may not be much sought,” said Tonge, adding that the refinery may now be funded more through Azerbaijan’s State Oil Fund.

The likely fate of Buhar’s geothermal scheme is a cautionary tale for private investors in Turkey, underlined analyst Deliveli. An existing corruption scandal that has revealed extensive alleged government meddling in public contracts and licenses has shown that “the rule of law doesn’t apply,” he said.