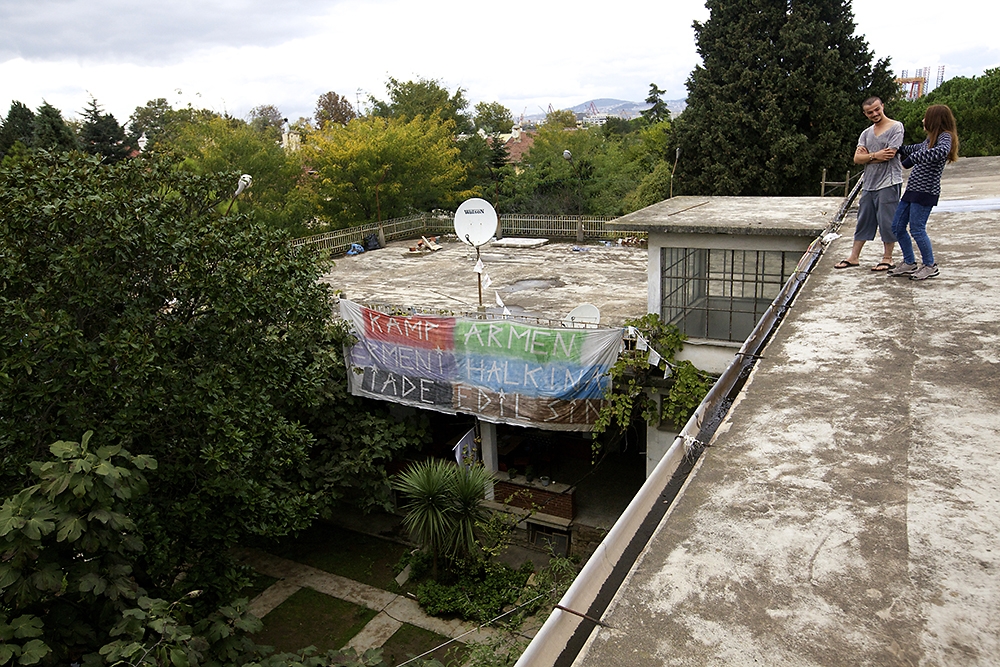 Two activists stand on the roof of the former Armenian orphanage near a banner reading “Return Camp Armen to the Armenian People.” (Photo: Alexander Christie-Miller)

A campaign for the restitution of an historic Armenian orphanage in Istanbul is highlighting a shift in attitudes in Turkey toward greater tolerance for long-persecuted, non-Muslim communities.

On October 27, lawyers for the Gedikpaşa Armenian Protestant Church Foundation announced they had reacquired the deed to Camp Armen — once part of a boarding school and orphanage for poor ethnic Armenian children — 32 years after it was ostensibly confiscated by the state.

The return of the property, and its rescue from demolition, came after intervention by Turkey’s Islamist-rooted government, as well as a grassroots campaign that reached far beyond the ethnic Armenian community and culminated in a 175-day occupation of the site by protesters.

“It’s unbelievable,” said Silva Özyerli, a former Camp Armen pupil who closely followed the restitution struggle. “For the first time, we tried to get our own rights, and we got them with everyone supporting us — atheists, Muslims, Kurds. As a Turkish Armenian, it makes me so proud.”

Camp Armen’s return, first agreed upon in May, came ahead of the November 1 general elections in which Turkish Armenian candidates for three different parties were again elected to parliament, after first gaining seats in June, when they made political history.

Two days before its announced return, EurasiaNet.org visited the derelict property in the Tuzla district on Istanbul’s Asian side.

At the site, none of the roughly dozen activists, most in their early 20s, was Armenian. Their stories suggest how attitudes toward race and nationalism are shifting in a society whose identity was forged in the 20th century through state-driven “Turkification.”

“All of us have in our history massacres and oppression by the state. We’re fed up with it, and we want to finish it, and that’s why we’re fighting,” said İlknur Yılmaz, 19, a member of the Hemşin community, a Muslim minority group that speaks a dialect close to Armenian. “Until I was 16, I thought I was an ordinary Turkish Sunni Muslim,” she said. “But after I learned of my assimilation, I began to feel closer to Armenians and Kurds.”

She learned of her link to Armenians after hearing the language spoken on a television documentary and realizing she could understand it. Older generations of Hemşin, she noted, still tend to affirm their Turkishness.

“I told my grandmother that we must be connected to Armenians, but she said, ‘No, we have nothing to do with them,’’’ she said. “They’re rejecting their roots and they’re continuing their lives as Turks.”

The property’s story itself serves as a microcosm of the travails of Turkey’s minority groups through the past century.

A banner hanging from one wall read “The Genocide is continuing,” a reference to the 1915-18 massacre and systematic deportation by Ottoman authorities of almost all of Anatolia’s ethnic Armenians, an upheaval in which hundreds of thousands died.

The descendants of those who survived today number around 70,000 in Turkey, with the majority living in Istanbul. Camp Armen was opened in 1962 to provide Armenian youth with an education that would allow them to hold on to their culture and religion.

“Camp Armen was where we could learn our life, language, culture values,” recollected former pupil Özyerli, 50, a native of the southeastern, majority Kurdish city of Diyarbakir who attended Camp Armen with her elder sister in 1970. “There were almost 400 children from different regions of Anatolia and we were like one big, whole family.”

In 1974, a new law called for the confiscation of properties acquired by ethnic-minority foundations after 1936. The state gained control of the orphanage in 1982 after a prolonged legal battle, and later sold it to a private owner. Left abandoned, it has since changed hands seven times.

This past May, its most recent owner, businessman Fatih Ulusoy, gained official permission to redevelop the site for private residences.

A 2011 law that provides for the compensation or return of confiscated minority-owned properties only includes those still held by the state, and made no provisions for the vast majority of former ethnic Armenian holdings now in private hands.

The camp’s plight garnered attention partly through its connection to Hrant Dink, the slain editor of Turkey’s ethnic Armenian newspaper Agos, who had attended the orphanage as a child. His 2007 murder prompted an outpouring of anger that proved a turning point in changing public attitudes toward Turkish Armenians.

Scores of mainly left-wing activists flocked to Camp Armen in May, halting the demolition. But the Gedikpaşa Foundation, the orphanage’s original owner, claims it was lobbying by Turkish government officials that proved critical in ultimately persuading Ulusoy to donate the property in return for unspecified compensation.

“I met with [Prime Minister Ahmet Davutoğlu], and he declared that ‘no matter what,’ we will return Camp Armen,” said Kirkor Ağabaloğlu, a representative of the Gedikpaşa Foundation, which plans to restore the building as an orphanage. “The government fixed this issue.”

Since coming to power in 2002, the ruling Islamist-rooted Justice and Development Party (AKP) has at times shown greater tolerance than previous governments for Turkey’s non-Muslim minorities. Even so, some government critics contend the AKP, along with President Recep Tayyip Erdoğan, sometimes use derogatory comments about minority groups, including the “Armenian lobby,” to help mobilize the party’s right-wing, often nationalist base.

On two occasions in August, groups of Turkish nationalists armed with clubs — not known to be connected with the AKP — attacked the protesters.

Even with the return of Camp Armen, some activists voice doubts about the extent to which the government accepts minorities as equals under the law.

Sayat Tekir, spokesperson for Nor Zartonk, a Turkish-Armenian activist site, believes that the Turkish government “still doesn’t see us as citizens of this country,” but concedes that society is changing.

“We’re at a further point than where we were,” Tekir said. “Now everyone recognizes that Camp Armen was taken away from us in a very unjust way.”