Turkey: Is Russia Ready to Play the Kurdish Card? 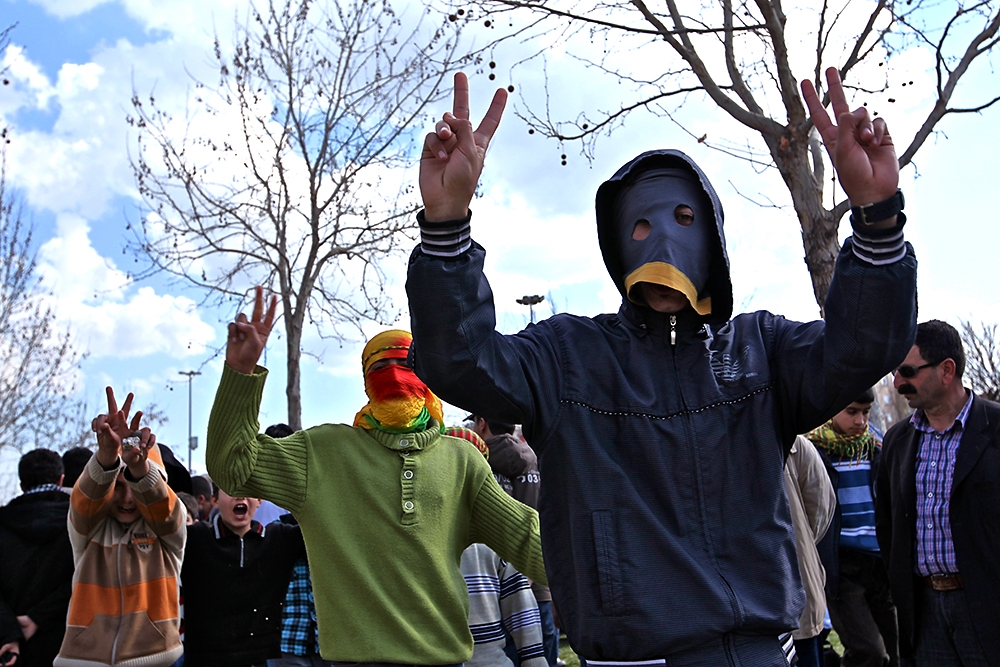 Kurdish boys, who cover their faces because they fear authorities will identify and arrest them, demonstrate at a park in Diyarbakir in March 2011 during a protest calling for greater democratic autonomy for Kurds. Turkey’s ongoing struggling relationship with its ethnic Kurdish population has Russia possibly looking at another alley in the region – the Kurdish movement outside of Turkey. (Photo: Alexander Christie-Miller)

After Russian President Vladimir Putin pledged no rapprochement with Turkey’s current political leadership, Russian officials have extended an invitation to the leader of Turkey’s main pro-Kurdish party to visit Moscow.

Selahattin Demirtaş, head of the pro-Kurdish People’s Democratic Party, is due in Moscow on December 24. Demirtaş has expressed a desire to open a party office in the Russian capital during his visit, which will be hosted by Russian Foreign Minister Sergei Lavrov.

The visit will likely raise more than a few eyebrows in Ankara, stoking fears that Russian support could extend beyond Turkey’s legal Kurdish movement to Kurdistan Workers’ Party, the PKK.

“The PKK had an office in Russia and from time to time it received assistance and support from Russia in the 1990s; Russia never considered PKK as a terrorist organization,” said retired Turkish diplomat Murat Bilhan, who served in Moscow.

The collapse in bilateral relations following late November’s downing of a Russian military jet by Turkish fighters coincides with the collapse in Ankara’s peace process with the PKK. In Turkey’s predominantly Kurdish southeast, Turkish security forces are now carrying out the biggest security crackdown in more than a decade against the PKK. Many towns and cities across the region are under curfew with over 10,000 security troops deployed and supported by tanks. On December 17, Turkish President Recep Tayyip Erdoğan promised to “annihilate” the PKK rebels in their homes.

“According to Turkish sources, the PKK is requesting heavy weaponry from Russia to broaden the insurgency in Turkey, I don't know what the Russian response was,” said Atilla Yeşilada, political consultant of Global Source Partners. Russia’s Kornet anti-tank missiles are likely to be at the top of the PKK wish list.

Moscow is likely unwilling to take such a step at present, Turkish analysts believe. A more likely option for Russia is providing arms to the Kurdish Democratic Union Party (PYD), a group that operates in Syria and which is closely connected to the PKK. Turkish officials characterize the PYD as an affiliate of the PKK and a terrorist organization.

The PYD’s armed militia controls much of the Turkish-Syrian border. “The PYD gets support from western countries, but it may also look for support from Russia as well. Russia is very active in the region, but if Moscow supports the PYD, it would bring a very negative reaction from Turkey,” said Bilhan.

Ankara appears for now to have little appetite for ratcheting up further tensions with Moscow. “Ankara has been taking insults and pressure and reacting very calmly, which they would not put up with from any other county. If they [Russia] do send arms, I don't think there is much they [Turkish officials] can do,” noted international relations expert Soli Özel of Istanbul’s Kadir Has University.

A step too far for Ankara may be the 98-kilometer (roughly 60-mile) strip of the Syrian border that divides the last remaining Syrian-Kurdish canton of Afrin from the rest of Syrian Kurdistan. “It's a red line for Ankara, if the PYG crosses west of the Euphrates, Ankara has declared it would intervene,” said Sinan Ülgen, a visiting scholar at Carnegie Europe.

Why is Ankara so sensitive? Such a move would give Syrian Kurds control of nearly all of the Turkish-Syrian border, denying an important supply route not only to Islamic State but also to Syrian rebel groups that Ankara is supporting.

A priority for Russian forces in Syria is to seal off Turkish supply routes for Syrian rebels. But Washington could yet thwart Moscow’s courting of the Syrian Kurds. “There are over 30 US special forces members in the Jazira canton under the PYD’s control,” observed retired diplomat Aydın Selcen who opened Turkey’s consulate in the Iraqi Kurdish regional capital of Erbil. “I would not expect them to forsake that very valuable partnership for Russia; it is too valuable to have the US as a partner.”

Ankara is not without cards to play. Languishing in a Turkish jail is Abdullah Öcalan, the leader of the PKK. Until July’s collapse of the peace process, Öcalan was in talks with Turkish leaders. In a potential effort to defuse the Kurdish issue, and thus prevent Moscow from exploiting it, Ankara could opt to revive the peace process. “Let’s build rational relations with Syrian Kurds, with whoever represents them, and let’s go back to the peace process in Turkey,” urged Selcen, the retired Turkish diplomat.

But with Turkish tanks operating in towns and cities in Turkey’s Kurdish region, the idea of revived negotiations seems to be a reach at this time. “Turkey’s policy of demonizing Kurds in Turkey and Syria could backfire seriously, and anyone, in particular Iran and Russia, who wish to do harm to Turkey is very certain to use the PYD and PKK,” said Yeşilada, the political consultant.

“So far, the PYD has listened to American advice, but it could change sides anytime,” Yeşilada added.