Turkey: Is Showdown Brewing Between Erdoğan Government and Gülen Movement? 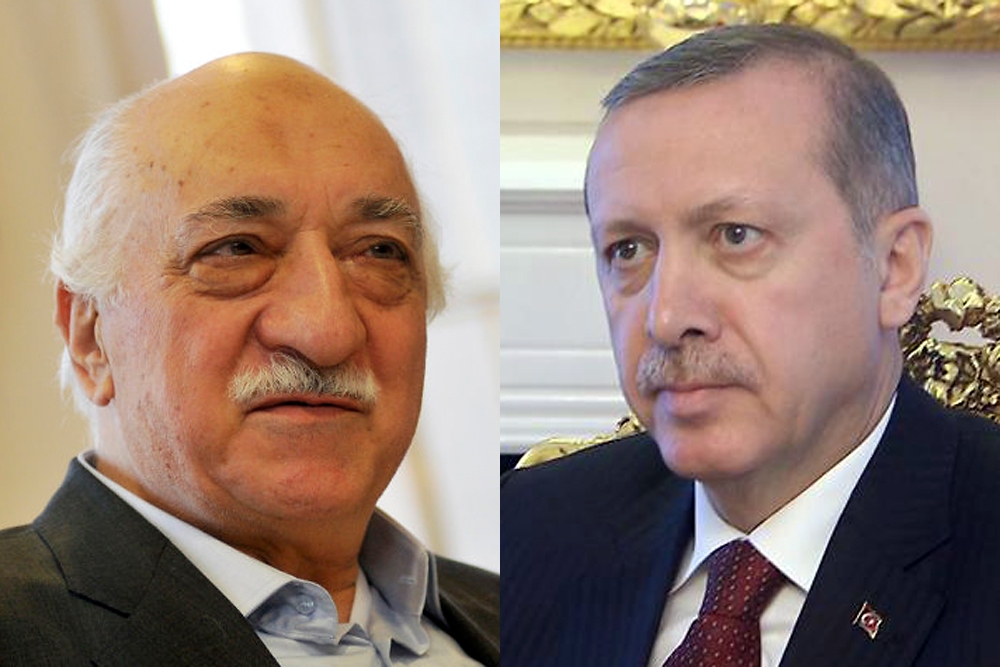 Is there a Turkish power struggle in the making? (Photos: fethullah-gulen.org; Turkish Prime Minister Office)

A tactical alliance in Turkey between Prime Minister Recep Tayyip Erdoğan and a movement headed by theologian Fetullah Gülen is unraveling. And the break-up is threatening to turn acrimonious.

Tension between Erdoğan and the Gülen movement heightened with two late-December announcements by the prime minister’s office that listening devices had been found in his private offices. Erdoğan asserted that responsibility for the bugs lies with the deep state, a broad term used to describe reactionary elements within the Turkish political system and military that act outside of the law.

Over the past decade, Erdoğan’s government -- with the help of Gülen followers, who are well represented in the Turkish media, judiciary system, and police -- has drastically curtailed the political influence of the military. Thus, the bugging incident could well be part of an effort by recalcitrant generals to claw back some of their lost power.

But some observers raised the possibility that the bugs could have been planted by Gülenists. “Those who played an important role in clearing the influence of the military from the deep state might be trying to fill the gap themselves,” former Erdoğan spokesperson Akif Beki speculated on CNN Türk on December 27.

The Gülen movement is known mostly for operating a vast network of Islamic schools around the world, and it also has considerable media holdings. Gülen’s followers inside Turkey were widely seen as a critical force in aiding Erdoğan and his moderate Islamist Justice and Development Party in bringing the military firmly under civilian control and in weakening the firm barrier between mosque and state.

With the generals now brought to heel, the basis for the Erdoğan-Gülen alliance has eroded. “The trust between the two factions has vanished and now this coalition is not functioning at all because common goals are not as strong at they were once before,” observed Kadri Gursel, a political columnist for the Turkish daily Milliyet. “The common ground has become weak.”

With Erdoğan’s hold on power now secure, the prime minister has less need to seek out that common ground, noted Yuksel Taskin, an associate professor at Istanbul’s Marmara University and an expert on center-right Turkish politics. “When fighting against the military and civilian bureaucratic oligarchy, he gave too much power to the Gülen community,” Taskin said. “He does not want to be pressurized by this group. He needs to curb their power. This is the logic of politics.”

The first signs of conflict began appearing nearly a year ago, when, in February 2012, the prosecutor’s office attempted to interrogate Turkey’s intelligence chief, Hakan Fidan, over supposed efforts by his agency, the MİT, to broker an end to the decades-long insurgency by armed Kurdish rebels.

The investigation, which ultimately could have seen Erdoğan in court as a defense witness, forced the prime minister to rush through parliament legislation that gives him a veto on the interrogation of the head of intelligence.

Investigative journalist Ahmet Şık, who has written a book on the Gülen movement, argued that the probe was, in fact, about the power struggle between Turkey’s two most powerful figures, Erdoğan and Gülen.

“Tayyip Erdoğan saw this as an attack on him and he responded with a harsher one,” Şık commented. “That was natural.”

Going from hunted to hunter, the MİT since has been seen as going after Gülenists. Erdoğan “gave orders to MİT to blacklist the bureaucrats close to the [Gülen] community in order to get rid of them,” wrote Emre Uslu, a columnist for Zaman Today, an English-language paper seen as sympathetic to the Gülen movement.

It is not just about purging hundreds of Gülen supporters in the police, civil service and judiciary. Erdoğan is now targeting the private tutoring schools that reportedly provide the movement both with an important source of income and with new followers.

Each year, the schools, or “dershanes,” prepare an estimated 1.2 million students for Turkey’s tough university entrance exam. A study published in September 2012 by the Turkish Chamber of Commerce estimated that the schools, more than 4,000 in number, have become a billion-dollar business, which includes a vast publication and distribution network.

Exactly how many of the schools are linked to the Gülen movement is not known, however.

Yet the fate of the schools is now seen as a litmus test for what direction the struggle between the prime minister and the theologian will go.

On December 7, Education Minister Ömer Dinçer, responding to a question at a school opening, appeared to indicate a slight softening of the government’s stance, pushing back the closure date of the schools to 2014. No explanation for the change was given.

So far, the 71-year-old Gülen, who lives in self-imposed exile in Pennsylvania, has been careful to avoid confronting the prime minister publicly on any of these fronts. But in a video address to his supporters in November, he exuded an air of determination.