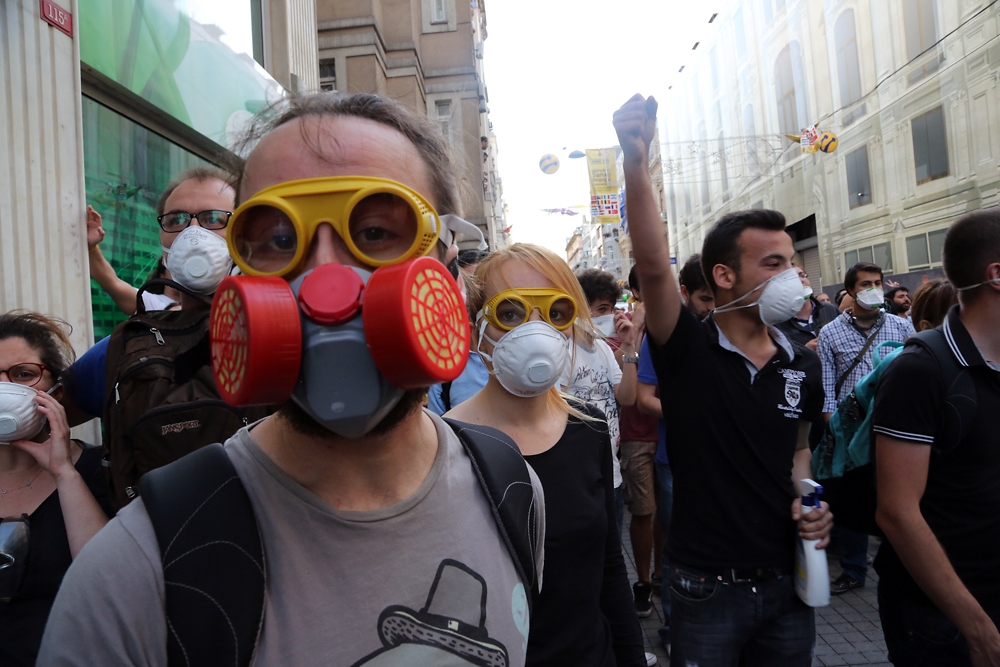 Protestors rally in Istanbul on May 31 to vent their anger at a government effort over redeveloping a park near Taksim Square. 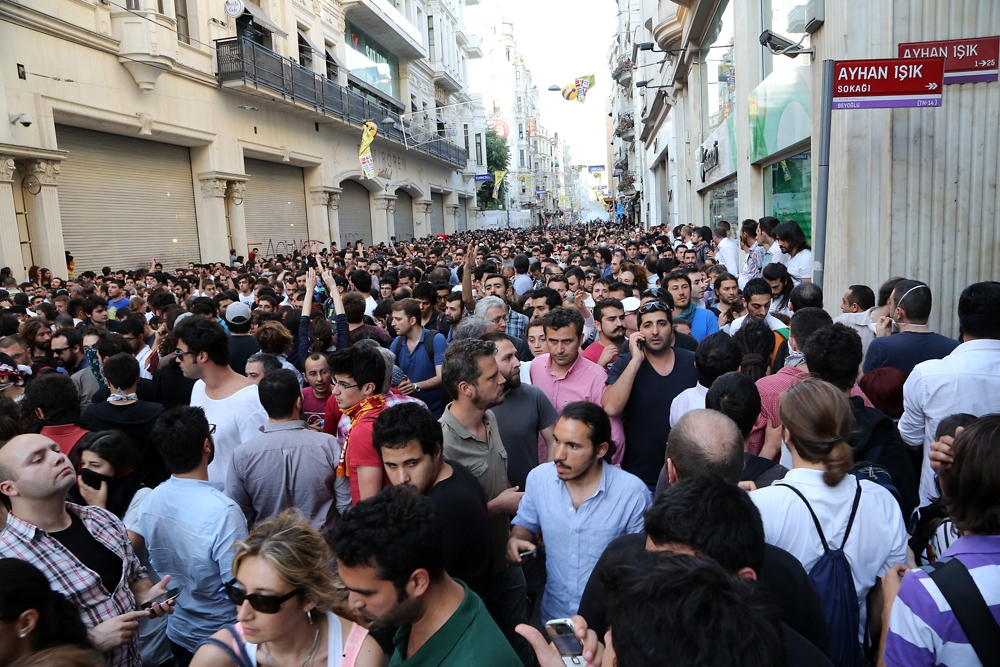 Tear gas plumes at the end of Istiklal Caddesi as thousands of protestors try to make their way to Taksim Square. 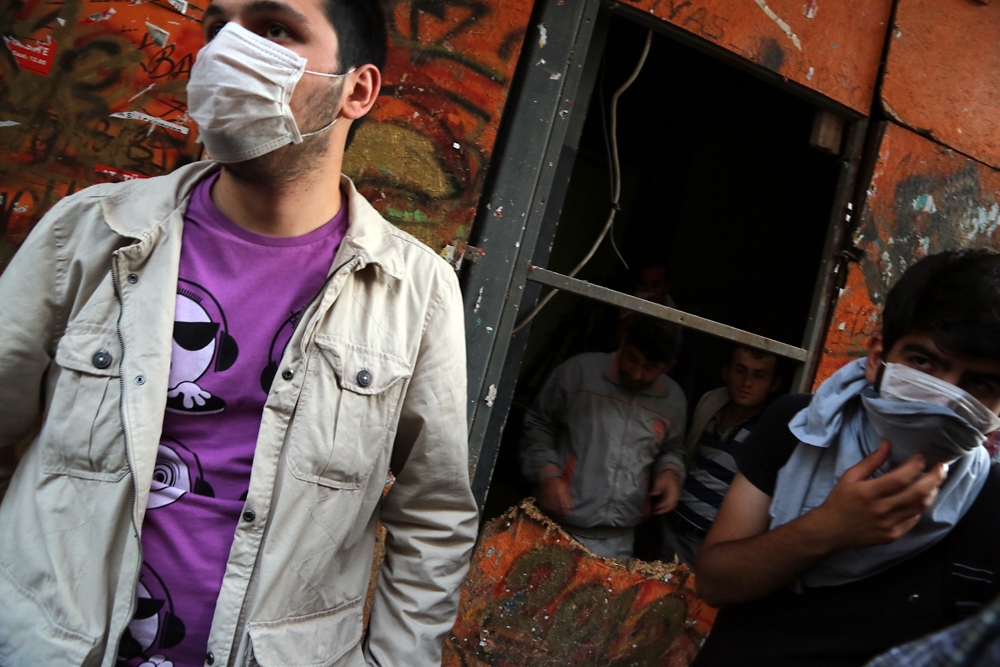 Protesters have been staging an 'Occupy Gezi Park' since May 26 to protest the removal of the park for a shopping mall. 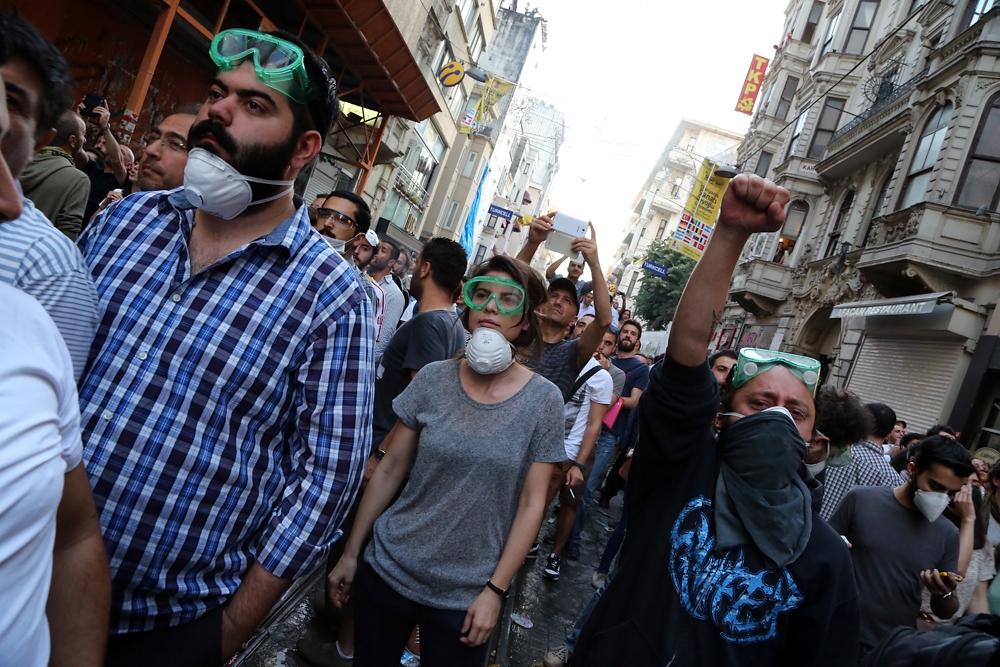 Protestors shout as police begin to fire water cannons and tear gas into the crowd. 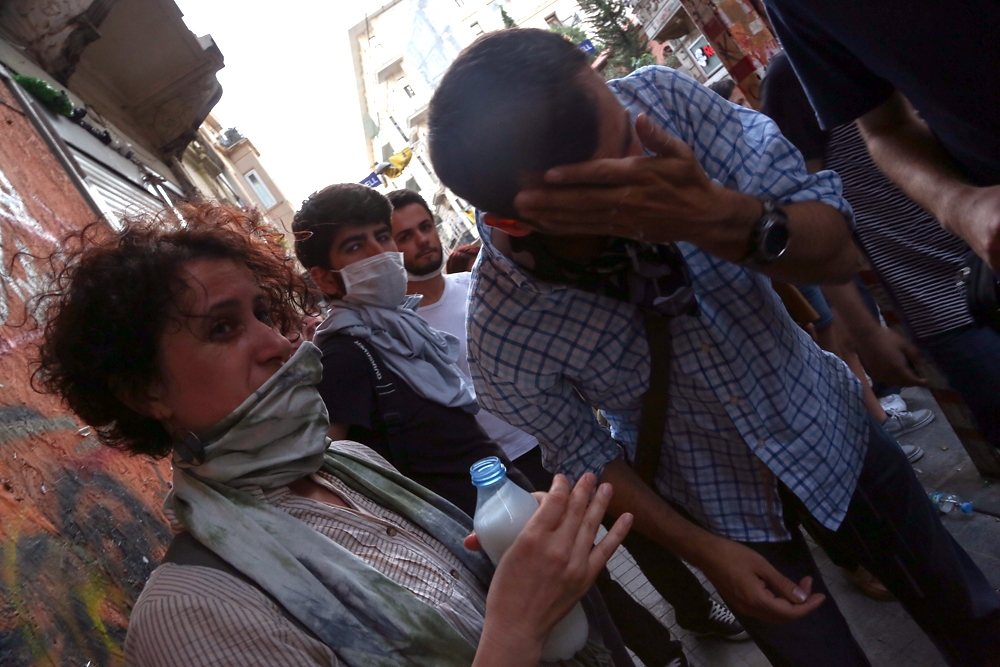 Protestors wash out tear gas from their eyes. 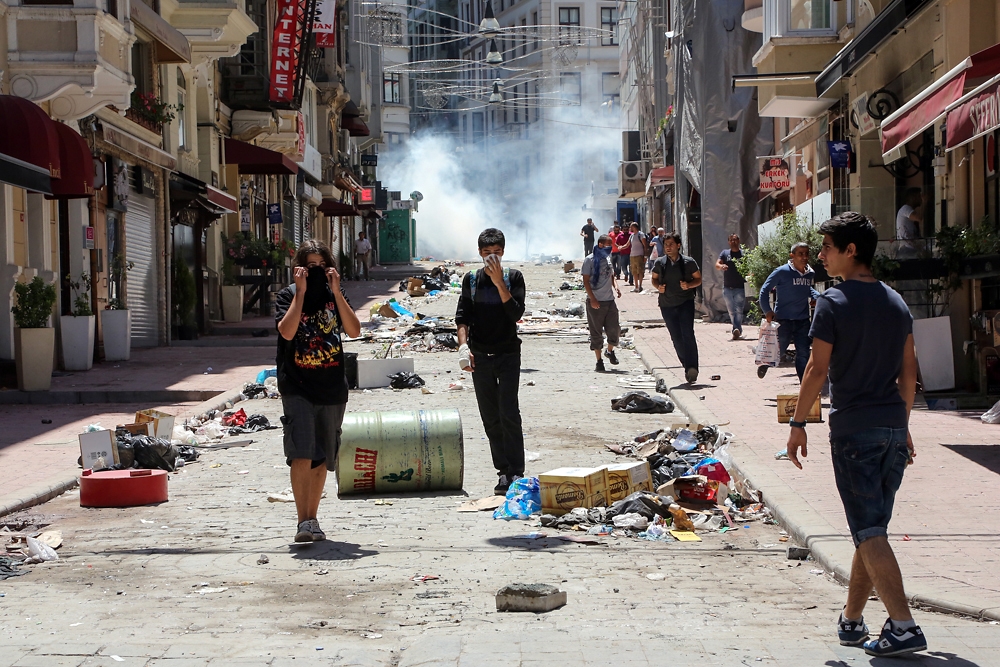 On the morning of June 1 protestors begin gathering again on the littered streets. 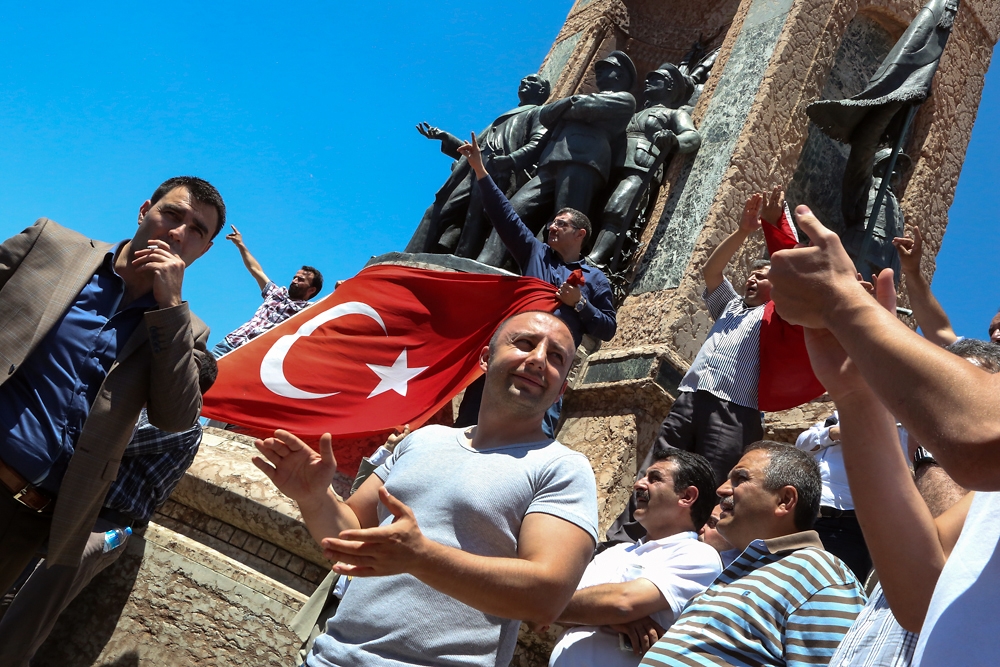 Protestors gather around a statue of Ataturk on Taksim Square. 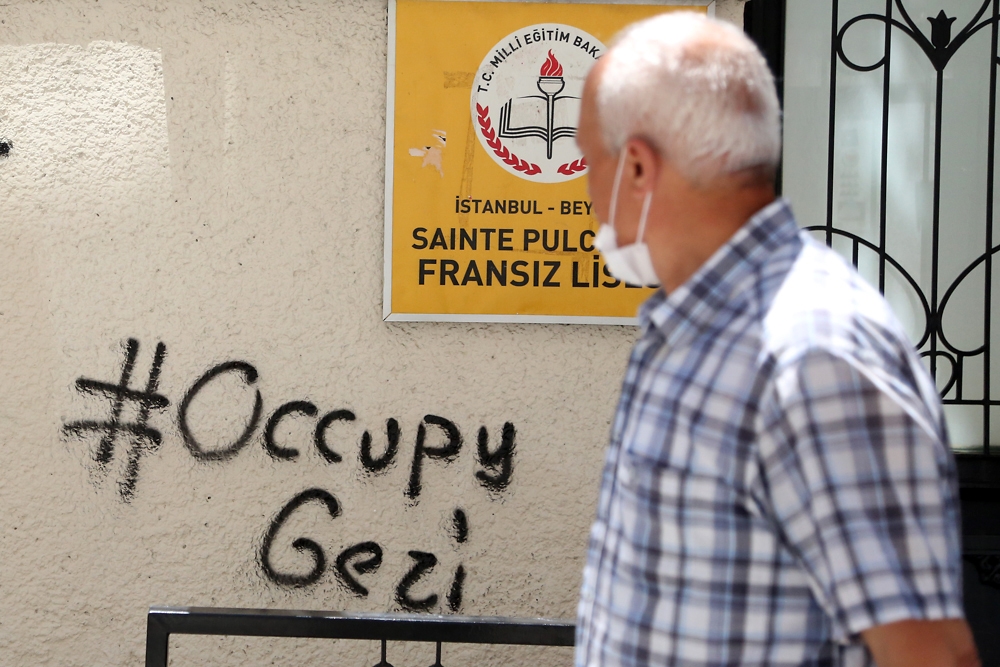 Despite the 'Occupy Gezi' movement the government still plans to continue with the redevelopment. 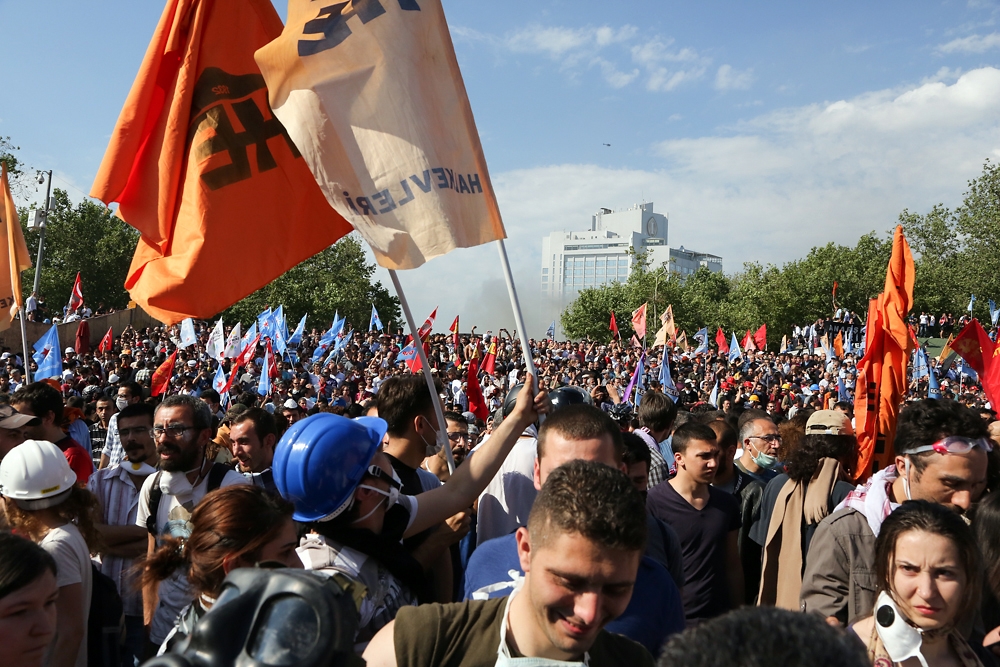 By the second day of the protest, the crowd in Istanbul grew larger and turned more anti government. 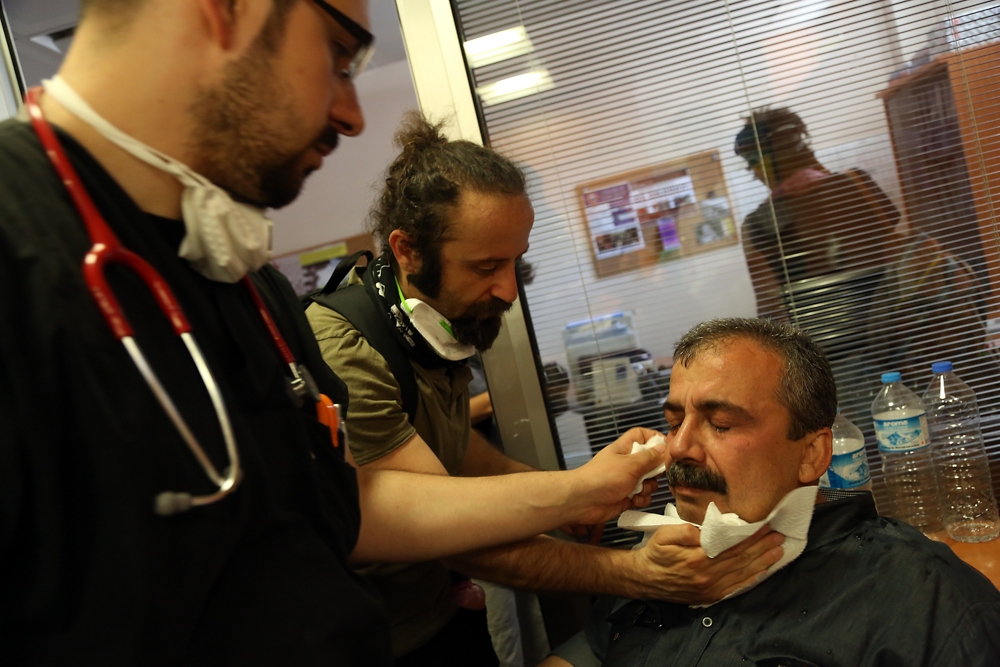 A leader of the protest movement is treated for tear gas exposure. 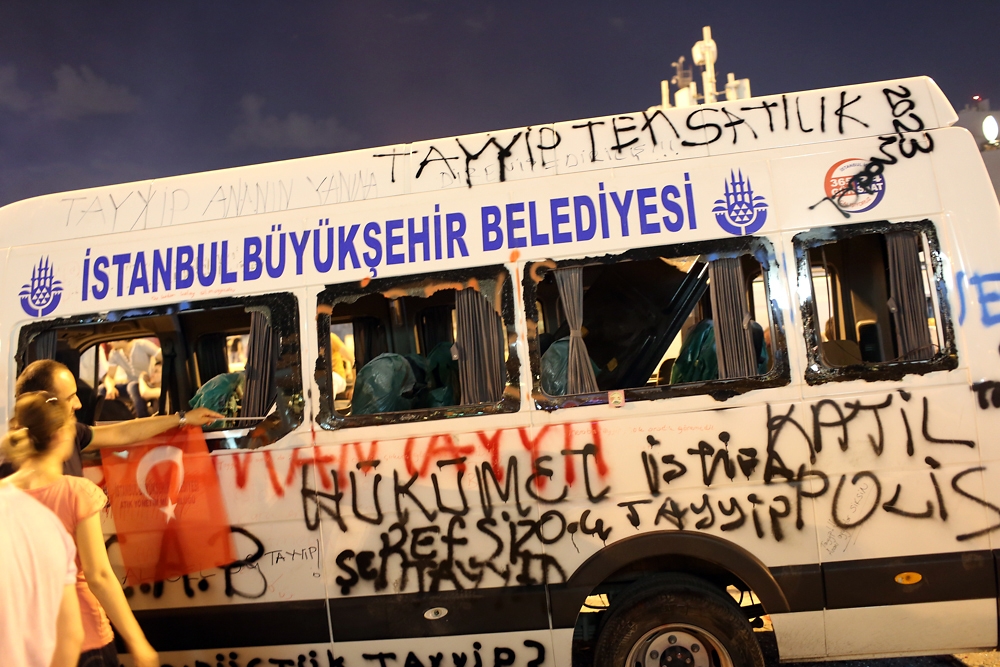 Graffiti covers a city bus destroyed by the anti-government protest. 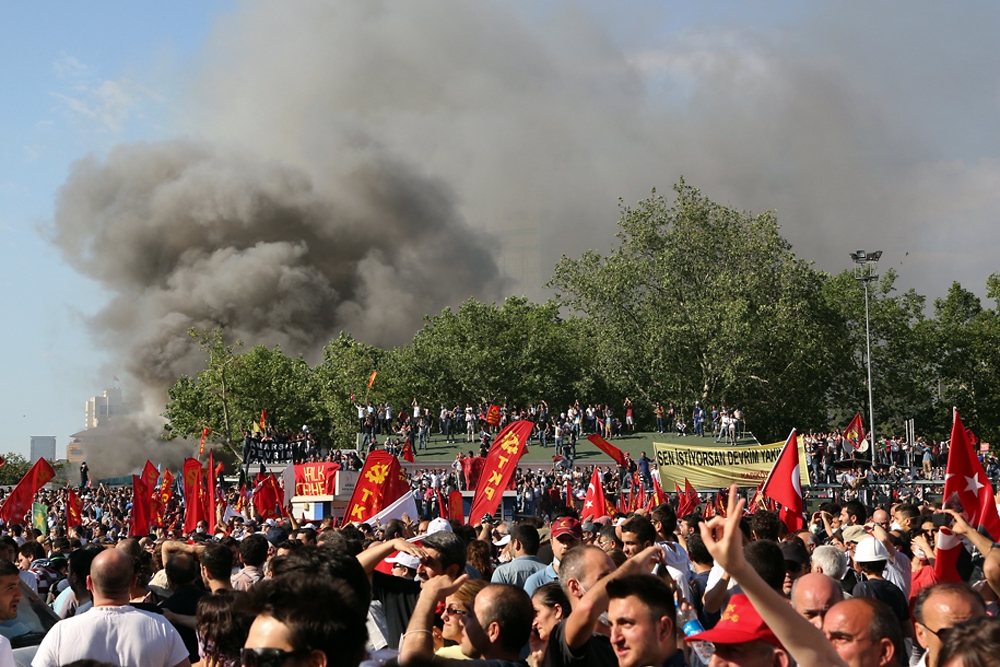 A fire rages in the construction section to knock down Gezi park, where the initial protest started. 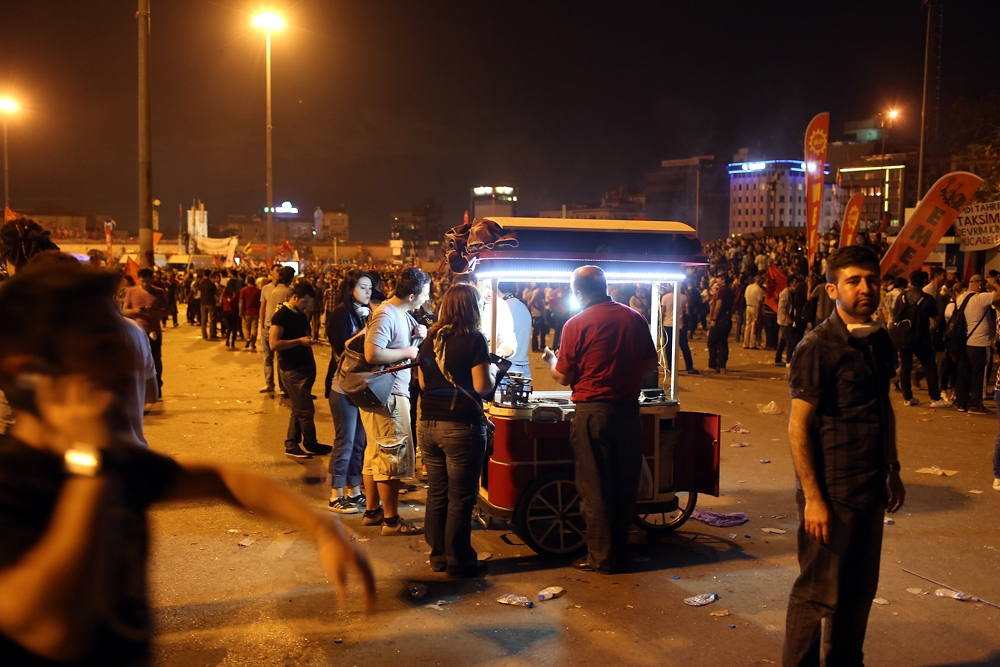 By evening, protestors had taken over Taksim Square. 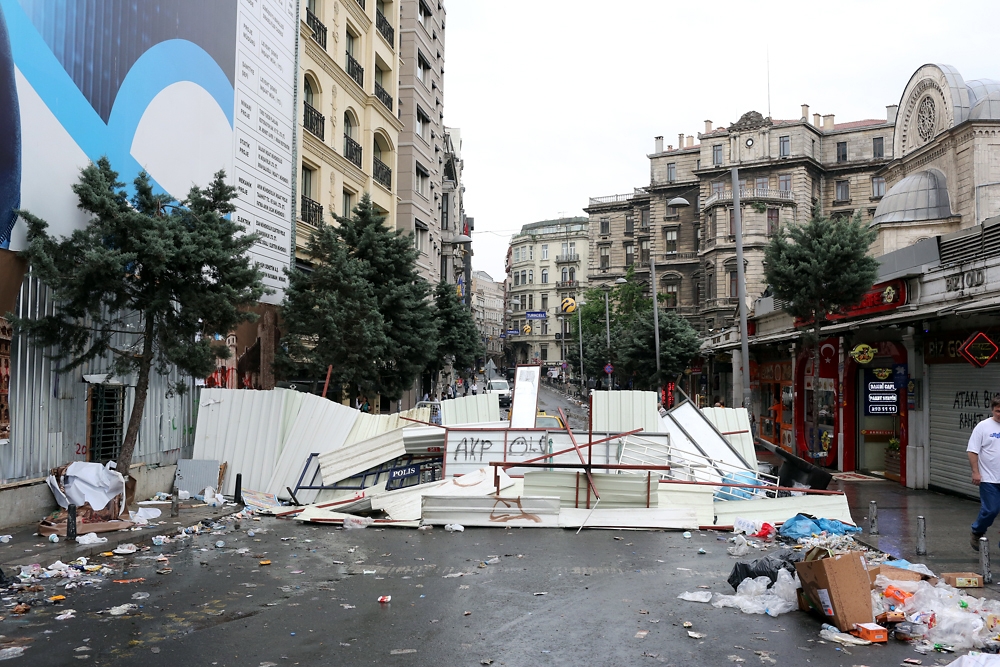 Street barricades were erected overnight between Taksim Square and the Cihangir district. 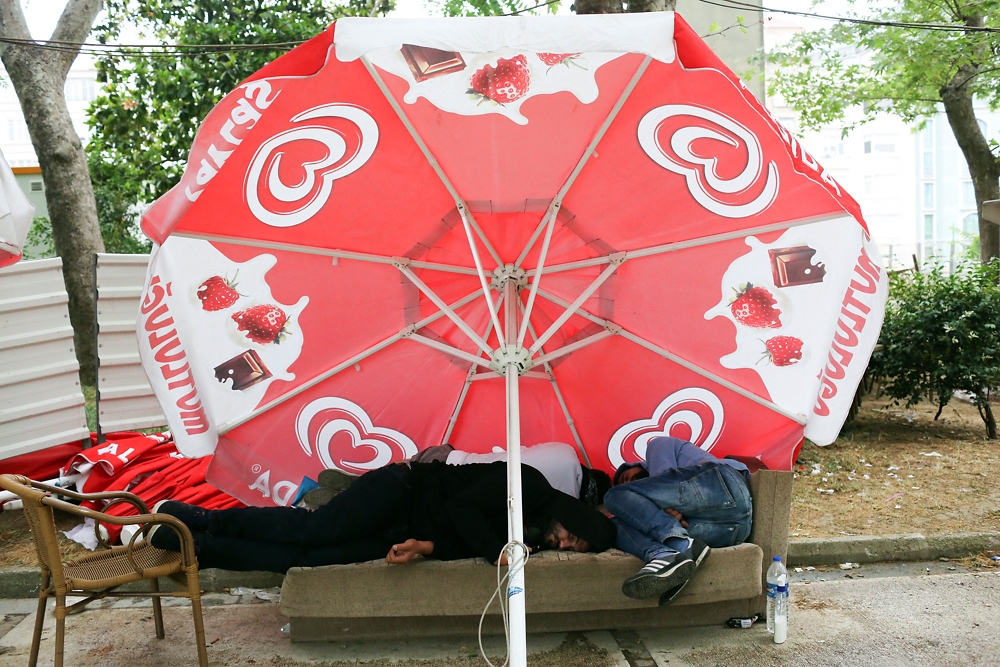 Protestors sleep on the morning of June 2 after re-taking Gezi park. 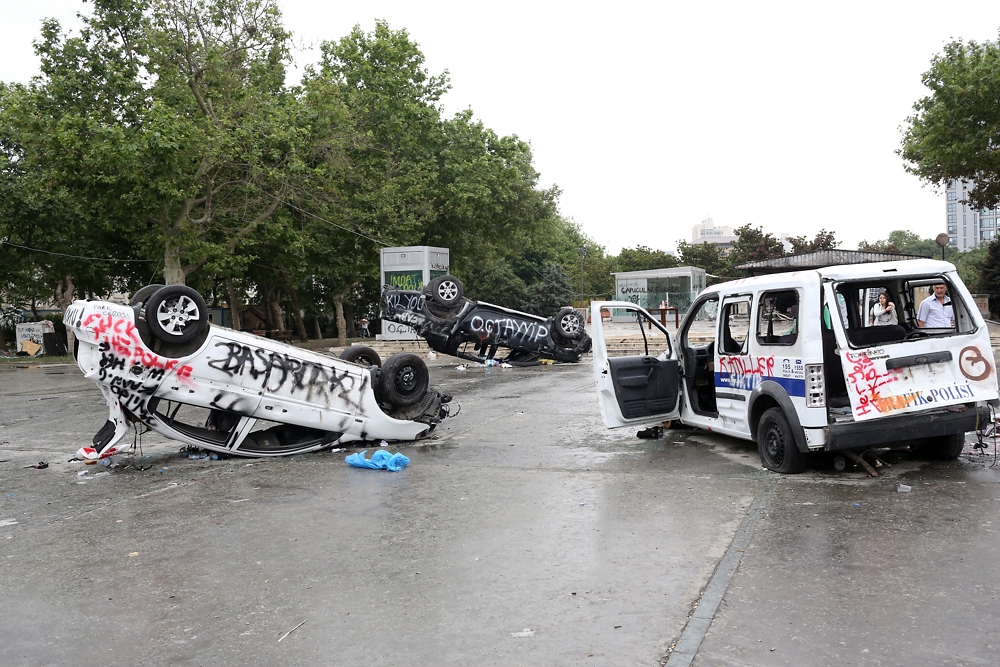 Police and municipality vehicles lay scattered and overturned in the park. 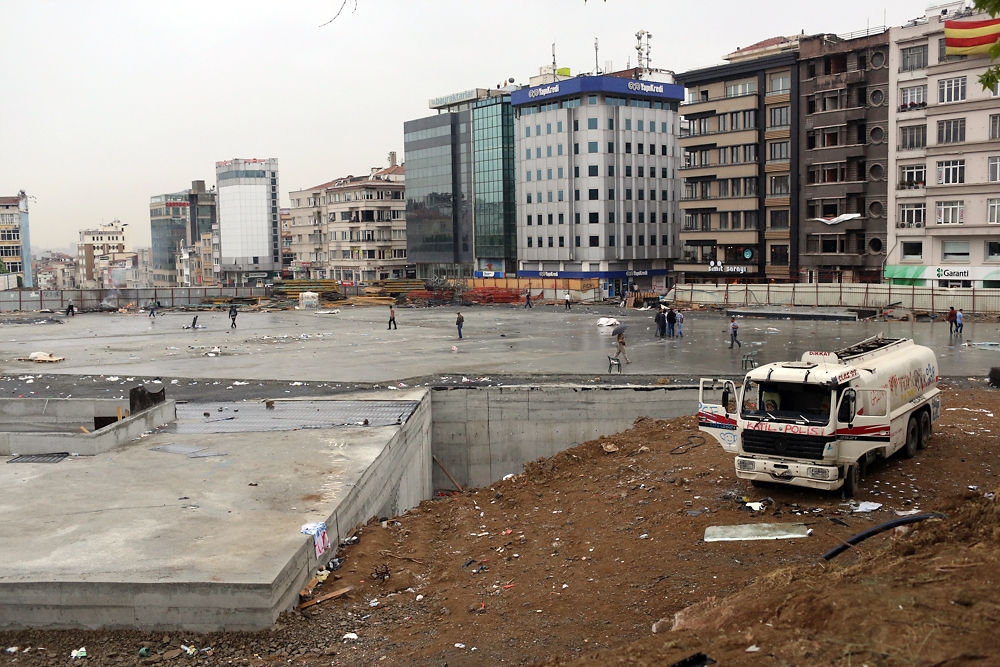 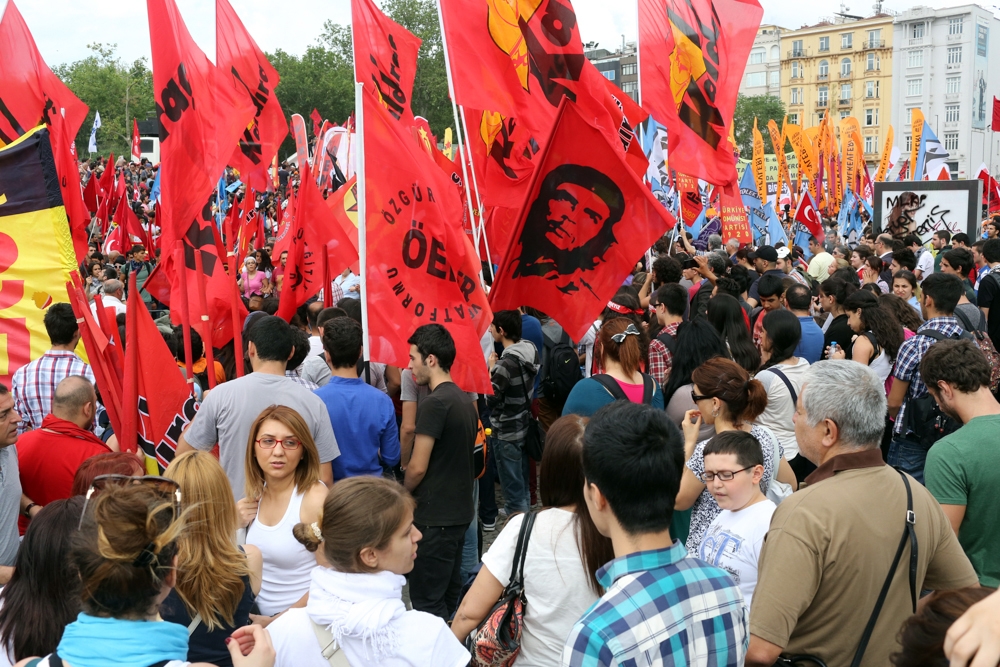 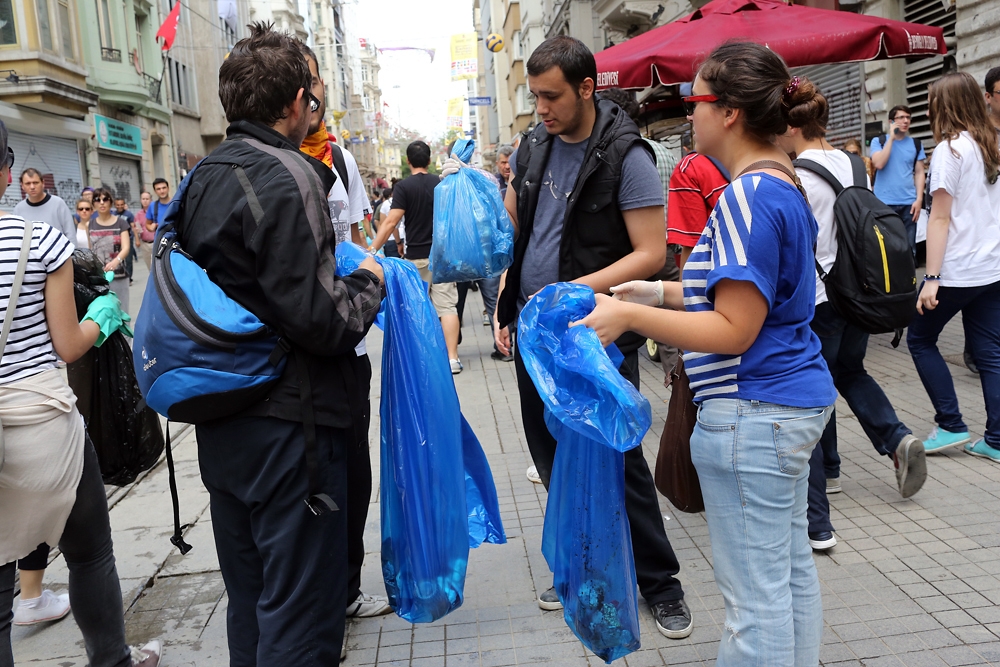 Protesters put out appeals using social media for volunteers to clear up the garbage left over from the rally. 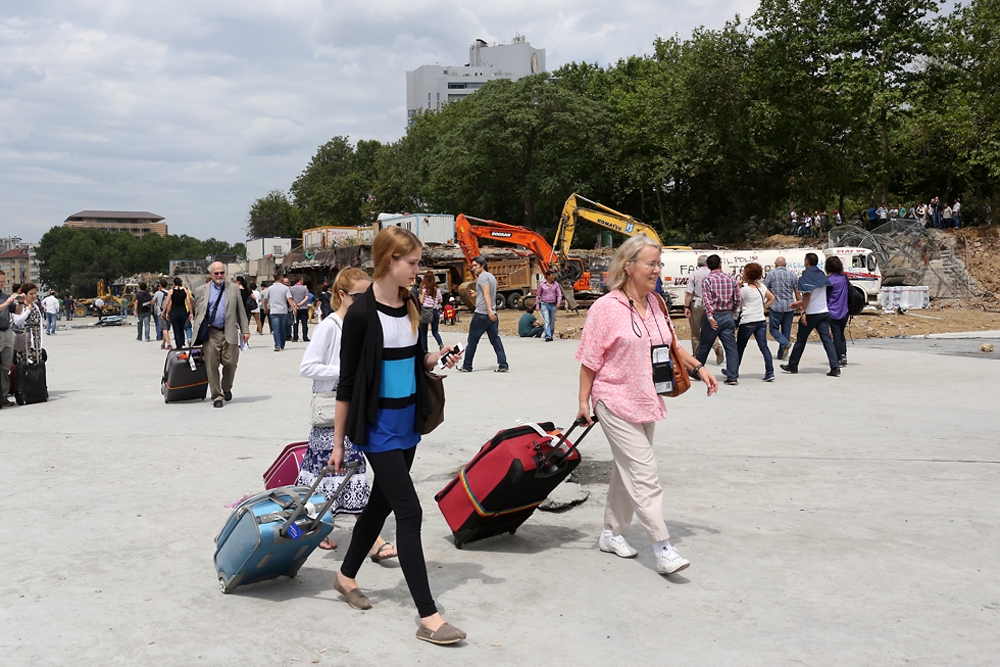 Tourists leave the Taksim Square and central Istanbul area to escape the protest.
prev
next

It’s not often that a small protest to preserve a city park turns into a national outpouring of frustration that threatens the political stability of a government in power for more than a decade.

Two days after violent clashes with police in Istanbul’s Taksim Square spread to 66 other Turkish cities, relative calm returned to the city on the morning of June 2, but without conveying any strong sense of victory to the thousands of demonstrators still gathering in the Square and still occupying the park, Gezi, that set Turkey on its political ear.

Rather, the protesters – generally middle-class, but ranging politically from leftists to nationalists – seem to view the lull as a time to repair, recuperate and regroup. Not as the end of the battle that has begun.

By evening, disturbances had returned to the district of Beşiktaş, where Prime Minister Recep Tayyip Erdoğan has an office, and to the center of the capital, Ankara. A symphony of pots and pans was reported on Twitter from central Istanbul neighborhoods as residents sounded out their support of protesters.

Demonstrators had arrived this morning at Taksim and the surrounding streets with garbage bags and buckets to pick up trash, including even cigarette butts, and replant flowers.

But the issues that fuel the demonstrators’ anger still remain.

Gezi Parc has been preserved, for now, by a court ruling, but the prime minister remains emphatic that the planned reconstruction of an Ottoman military-barracks, featuring residential and commercial facilities, on the site will go ahead.

The struggle over the park, the last strip of green space in the center of this city of more than 13.4 million people, has come to symbolize for many what they see as the central government’s deaf ear to complaints on topics ranging from rampant construction projects to rampant media arrests.

That sense was deepened during the clashes that broke out on May 31. With little warning, police used water cannons on civilians indiscriminately, flipping them into the air to land on their heads, then dousing them with tear gas.

Despite international outcry about the use of such methods, a variety of tear gas was back in action on the night of June 1 in one Istanbul suburb, according to doctors at the scene who treated those who inhaled the fumes.

Tourists interviewed near Taksim Square expressed dismay and outrage at police actions, with one Saudi Arabian man whose family was gassed en route to their hotel, emphatic that he would never return to Turkey.

The national broadcast media generally avoided coverage of these events, even when the mayhem dictated otherwise.

As of June 2, 1,700 people had been arrested nationwide, though most reportedly were quickly released, news wires reported Interior Minister Muammer Guler, as saying. Along with property damage into the millions of dollars, 57 individuals and 115 police were reported as wounded, though social-media estimates by protest activists give far higher estimates.

While the government has promised to investigate police abuses, respect differences of opinion over the Taksim Square construction project and called for calm, their words are not seen as a peace offering by many in Istanbul.