Inandi's wife believes he has been tortured. 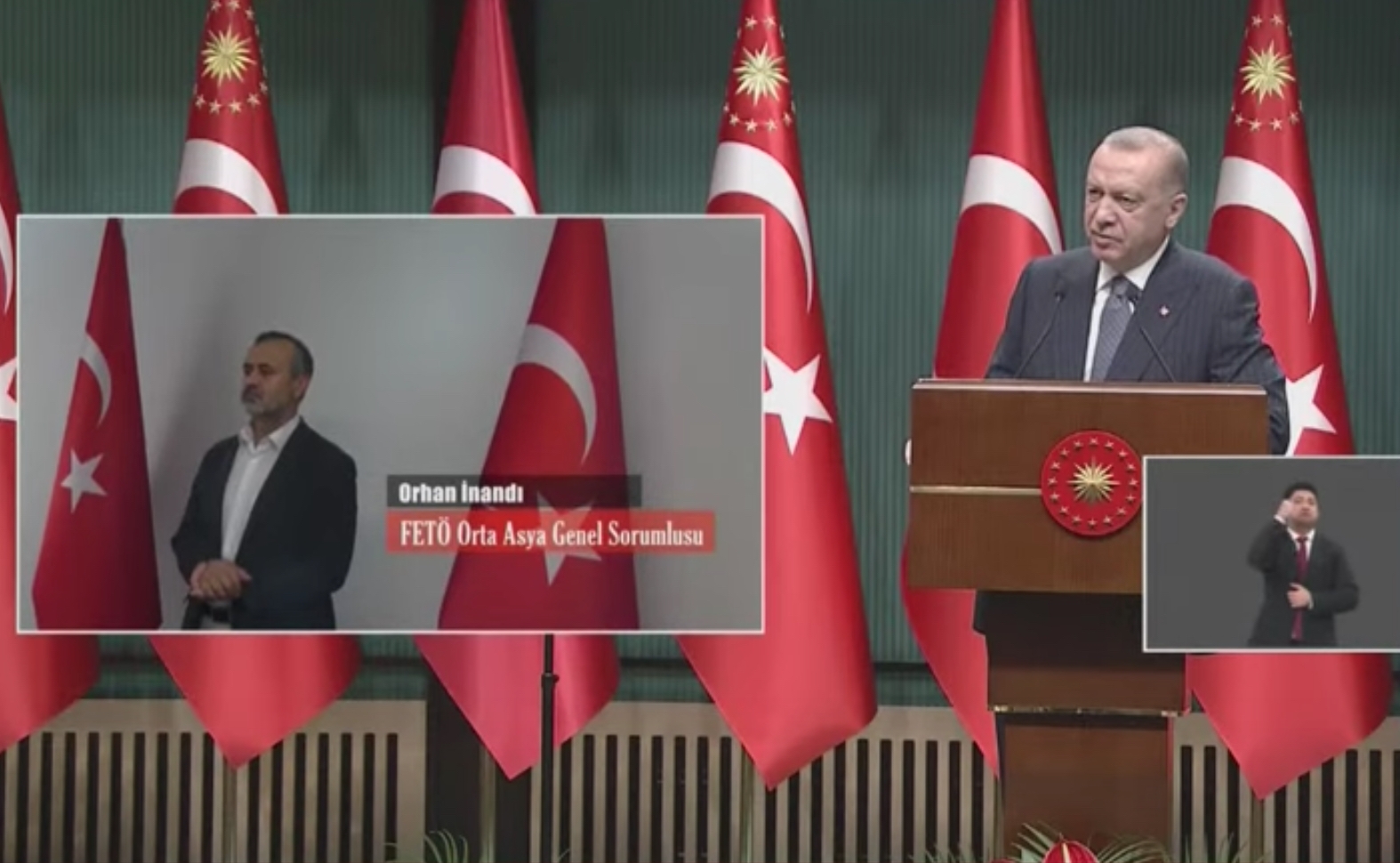 Erdogan announcing the news of Inandi's abduction on television.

Turkey’s president took to the national airwaves on July 5 to brag that his security services had successfully spirited a Kyrgyzstan-based businessman out of the country, capping another triumph in Ankara’s campaign of international abductions of perceived foes.

President Recep Tayyip Erdogan made his remarks five weeks after Orhan Inandi, who holds both Kyrgyz and Turkish citizenship, disappeared from near his Bishkek home.

While it is implausible that Inandi could have been smuggled out of the country without the consent of the Kyrgyz authorities, President Sadyr Japarov affected to be surprised by what had happened.

“I immediately instructed Foreign Minister Ruslan Kazakbayev to summon the [Turkish] ambassador and deliver a note of protest to him. The note has been delivered today,” Japarov told 24.kg news agency.

It is not known if Turkey has responded to the note.

When Inandi first went missing, suspicions immediately fell on the Turkish security services, especially as they have bragged openly of their prior successes in abducting others on foreign soil.

Inandi was a natural target for this treatment on account of his ties to a movement led by spiritual leader Fethullah Gulen, whom Ankara accuses of having masterminded an attempted coup in 2016. His activities in Kyrgyzstan had focused heavily on education and he was responsible for founding a widely respected, local network of Sapat schools inspired by Gulen’s teachings.

Erdogan’s government, however, has cast Inandi in the guise of a terrorist leader.

“We will not allow any structures that betray their state and nation, concoct subversive activities, spill blood, and cause material and moral damage, to continue their existence,” he said in his televised remarks announcing Inandi’s arrest.

It is not known for certain where Inandi was held after his abduction, but the likelihood is that he was being kept at the Turkish Embassy in Bishkek. Between his kidnapping and his reappearance in Turkey, Japarov travelled to Ankara, where he held talks with Erdogan.

Inandi’s supporters held out hope until the end that they might secure his return. His wife, Reikhan, had on the same day of Erdogan’s announcement mounted another of a series of solo pickets in a central Bishkek square, holding up a poster reading “Where is Orhan Inandi?”

One line of speculation is that Inandi’s removal from Kyrgyzstan may have been carried out with the involvement of Turkish Defense Minister Hulusi Akar, who visited Bishkek in late June and met with his Kyrgyz opposite party.

The saga of Inandi’s disappearance has been plagued by chronic dissembling among all involved.

Kyrgyz police claimed to have conducted an exhaustive manhunt across the country, as well as reaching out to Interpol for checks in Turkey and Russia – this was all despite the likelihood that the businessman was right under everybody’s noses. Turkish diplomats would have been safe in the knowledge that Kyrgyz law enforcement would not be able to check the premises of the embassy in Bishkek, which is off-limits to local authorities under the terms of the 1961 Vienna Convention on Diplomatic Relations.

After Japarov met with Erdogan in Ankara on June 9 in a visit that produced a pledge of military assistance from Turkey, his press secretary told reporters that the subject of Inandi had come up in conversations.

“Erdogan replied that he didn’t know him, that he had no information [on the matter] and that he didn’t want to hear anything about FETO supporters,” said the spokesman, Erbol Sultanbayev, using an acronym used by Turkish authorities to describe Gulen’s movement.

On July 5, Erdogan indicated that he was, in fact, highly familiar with the whole case.

Writing on social media after a visibly weary and weakened Inandi was paraded on Turkish television, Reikhan Inandi expressed her deep sense of betrayal at the hands of the Kyrgyz authorities.

“I believed in the Kyrgyz government. It gave me some hope that my husband was in Kyrgyzstan,” she wrote. “We are very disappointed with this outcome. My husband is very weak. He has a large swelling on his hand, and I can see that they have been torturing him.”