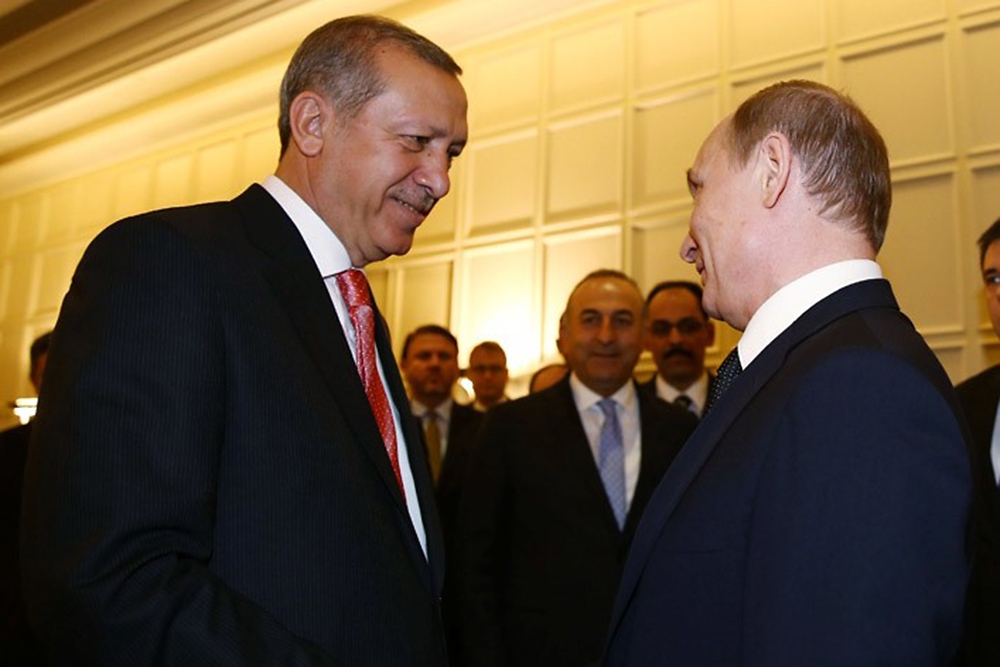 Prior to the Syrian intervention, robust trade relations, particularly in the energy sphere, had brought Turkey and Russia closer together. The strong-arm governing styles of both Putin and Erdoğan likewise helped the two leaders develop a strong working relationship.

“He [Erdoğan] saw Russia as [a] counterbalance to NATO and [the] US,” recalled Suat Kınıklıoğlu, a former MP for Erdoğan’s Justice and Development Party (AKP) and the former spokesperson for parliament’s Foreign Affairs Committee.

The Kremlin’s Syrian intervention has quickly driven a wedge between Putin and Erdoğan. The political future of incumbent Syrian leader Bashar al-Assad is the main stumbling block: Putin is determined to keep Assad in power, while Erdoğan has long considered his ouster to be the key to restoring Syrian peace.

On a state visit to Ankara last December, Putin proclaimed Turkey to be a “strategic ally” of Russia. Yet the Syrian crisis ultimately revealed it was never a relationship of equals.

“Behind Putin’s smile, Russia remains a big state and can show its claws whenever it is convenient,” said retired Ambassador Murat Bilhan, the former head of the Turkish Foreign Ministry’s Strategic Research Centre. “Now Russia found the time and place to use its power. This has always been the Russian mentality, back to Soviet days. It has not changed.”

“Turkey could never compete with Russia in any field,” added Bilhan, who served as a diplomat in Moscow during the Soviet era. “Russia is a superpower and Turkey is a regional one. Turkey miscalculated.”

While the Kremlin may act as though Turkey is a bystander when it comes to Syria, Putin still seems somewhat sensitive to Turkish concerns. After al-Assad’s visit to Moscow, the Kremlin on October 22 announced that Putin called Erdoğan to provide an update on the meeting and discuss Syria.

Erdoğan’s frustration over his inability to influence Kremlin behavior has occasionally bubbled up in public. Following the launch of Russian air strikes in Syria, along with Turkish claims that Russian warplanes had violated its air space, the Turkish president made a thinly veiled threat – reminding Moscow that Turkey is its biggest customer for natural gas and that could change.

But one analyst believes the president risked overreaching. “That’s not feasible. Turkey imports 55 percent of its gas from Russia, 10 percent of its oil from Russia. In the gas business, you simply can’t diversify overnight. These things take time,” pointed out analyst Volkan Özdemir of Ankara’s Institute for Energy Markets and Policies.

If anything, it is Ankara which should worry, cautioned Soli Ozel, an international relations expert at Istanbul’s Kadir Has University. Russia retains the power to manipulate energy exports in order to punish Ankara. “Turkey cannot afford to upset the Russians beyond a certain limit,” he cautioned. “Because somehow the pipelines can have an accident or need repair and this may last 20 days in the dead of winter. But fortunately for Turkey, Russia these days needs as much money as it can get.”

Ankara could reduce its energy dependence on Moscow by switching to liquefied natural gas, Özdemir said. The Turkish government could also take a current pricing dispute with the Kremlin-controlled energy company Gazprom to international arbitration, like it did with Iran.

For now, Ankara has not indicated that it will take such steps. That may be a sign that Turkish leaders have already come to terms with the new geopolitical reality.

That reality is not pretty for Turkey. Former Turkish Ambassador Bilhan said recent developments have created a far more forbidding neighborhood for Ankara. “Turkey finds itself encircled by Russian power, both from the north, the Black Sea, Caucasus and Syria. Turkey did not expect anything like that.”

The downturn in Turkey’s diplomatic fortunes can be traced back to Russia’s forced annexation of Crimea. Turkish leaders were restrained in their criticism and did not join their Western allies’ economic sanctions against Russia. That stance came in the face of calls from Turkish nationalists to support Turks’ ethnic kin, Crimean Tatars.

“[Erdoğan] calculated given his close relationship with Putin that he could manage to get certain rights and protection for the Crimean Tartars by not publically opposing Russia’s move in Ukraine loudly, but I think that has pretty much backfired,” said Kınıklıoğlu, now the executive director of STRATiM, an Ankara-based think-tank.

Erdoğan’s supporters are striving to put the best spin on an increasingly difficult position. “There are areas of excellent relations side by side with areas of disagreement, so it's a complicated relationship,” AKP spokesperson Ömer Çelik, a close presidential confidant, said when discussing the new parameters of the Turkish-Russian relationship with foreign journalists earlier in October.