Turkey Makes It Official With SCO 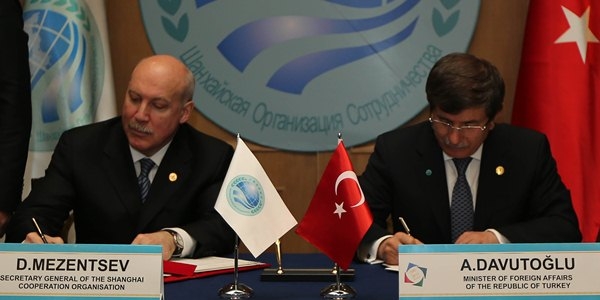 Turkey has formally become a "dialogue partner" of the Shanghai Cooperation Organization, a step with unclear practical consequences but substantial symbolic import. Turkey is the first NATO member with any sort of formal relationship with the SCO, which is often represented as an Eastern "anti-NATO." All the cliches about Turkey being "caught between East and West" -- here they are, codified in agreements with political-military blocs.

We are thankful for being accepted as a member of this family,” Davutoğlu said. “This is only a start.

Maybe [it only seems like] a complementation of a process but [in fact] it is the start of a long way we will walk together hand by hand. This is our point of view on the Shanghai Cooperation Organization, and we will move in this direction,” he continued.

Davutoglu didn't address the relationship between Turkey's NATO membership and SCO partnership, but Itar-Tass asked SCO Secretary General Dmitry Mezentsev to comment on it and he basically said, we don't know:

Turkey's participation "will allow Turkey... to apply its efforts, potential and experience in making the organization become more authoritative. I'm convinced that there will be no grounds for this to cause any tension between NATO and the SCO... This is the first experience when a NATO country gains official, albeit beginning, status in the SCO framework, and it is a new experience for the organization. There is every reason to believe that the SCO's new dialogue partner will not just observe the letter and spirit of the SCO charter, but also use the initiative potential of its role in the region for the good of the whole organization, for the realization of its overall goals, tasks and plans."

Turkey's president, Recep Tayyip Erdogan, made waves a couple of months ago by saying that the SCO is "better" and "more powerful" than the European Union, and that Turkey aspired to full membership in the SCO. The consensus was that Erdogan said that mainly to tweak the EU, which Turkey has been trying to join for decades. But it's a bit of an empty threat, given that the SCO is still an organization very much in search of a mission. Russia seems to have lost interest in the group as a security bloc, instead focusing on its Collective Security Treaty Organization, and China has been using the group primarily as a means of implementing bilateral development projects in Central Asia with a multilateral shell. Raffaello Pantucci and Alexandros Petersen, two analysts of China's presence in Central Asia, wrote in The Diplomat:

[E]ven as it makes sense to decision-makers in Ankara to reconsider their relationship with the EU, it is not a strategically sound choice for Turkey to consider membership of the Shanghai Cooperation Organization (SCO) as an alternative....

The issue... is that the SCO remains a nascent organization that is still in the process of defining itself. Absorbing new members, or figuring out the protocols for new members to be formally acceded, is merely one of the many problems the SCO faces. The Organization’s security structures, including the unfortunate-acronym RATS Center [Regional Anti-Terrorism Structure], have yet to fully flesh out their purpose in advancing regional security in a very militarily tense region. Meanwhile, China continues to dominate the SCO's economic agenda, including negotiations to establish an SCO Free Trade Area (FTA), an SCO Development Bank, and Beijing offering $10 billion in loans for member states. All of this alarms Russian strategists who see China encroaching on Moscow's Central Asian interests. Nonetheless, all of this results in a minimal concrete presence.

Even Turkey's Ministry of Foreign Affairs doesn't seem to quite know what to make of its policy toward the SCO, as Al-Monitor points out in a piece detailing the confusing official statements vis-a-vis the organization.

My guess, and this is purely speculation, is that these overtures to the SCO are not directed toward the EU, whose officials surely are aware (as are Turkey's, no doubt) that the SCO is a somewhat empty shell. But this could be more about courting the non-Western world, where there is increasing unhappiness with the U.S./Europe-dominated world order and which sees in the SCO at least an attempt at countering that.