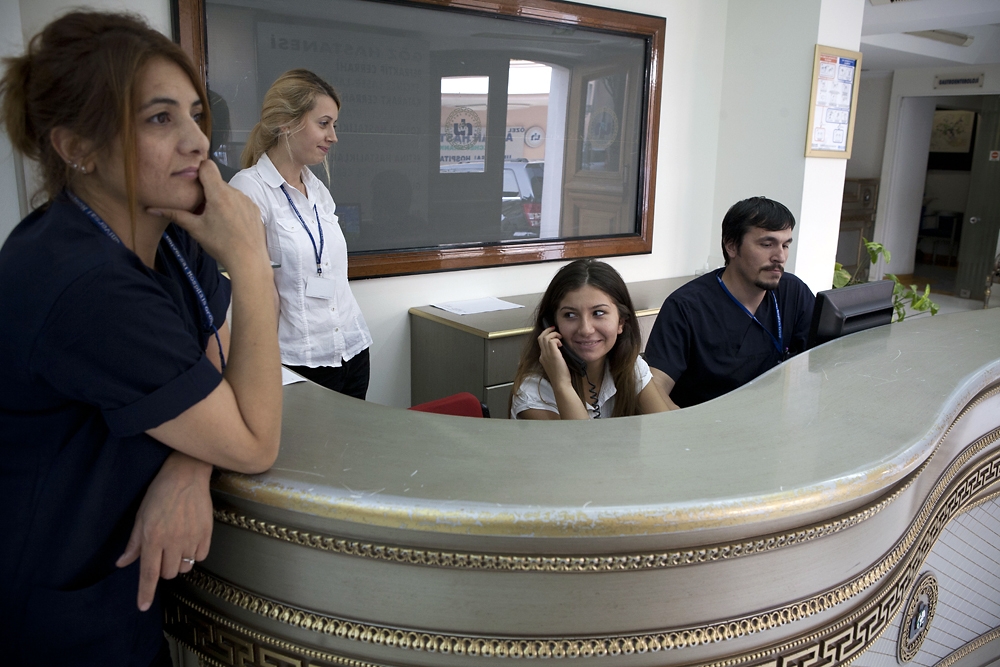 Tourists don’t just come to Turkey for the sun and the sights. Hundreds of thousands of foreign patients each year are now traveling to receive treatment in private hospitals in Istanbul and other Turkish cities.

Forty-seven-year-old Bishkek resident Mira Iskendirova, a cervical cancer patient, is one such medical tourist. When her cancer metastasized, Kyrgyz doctors recommended that Iskendirova fly to Turkey for treatment. She opted for the Anadolu Hastanesi, a private Istanbul hospital affiliated with the Johns Hopkins Hospital in Baltimore. After an operation, she returned to Kyrgyzstan for a chemotherapy regimen prescribed by her Turkish doctors.

“In Kyrgyzstan, the price is lower, of course,” Iskendirova said. “When you compare quality, this is higher. In health, I prefer quality rather than price.”

Turkey’s Ministry of Health estimates that some 500,000 foreigners were treated at Turkish hospitals in 2010; the figure represents a 70-percent increase since 2007. In 2010, the country earned a whopping $850 million from health tourism, according to the semi-official Anatolia News Agency.

The Foreign Economic Relations Board, which describes Turkey as “an emerging medical destination,” attributes the attraction to relatively low medical costs, a convenient geographic location and reputed adherence, as a European Union candidate member, to EU healthcare standards.

Turkey’s broader reputation as a tourist destination apparently plays a role, too; “Sun, beaches and laser eye surgery in Turkey” headlines one promotional piece on the Board’s website. The country’s 556 private hospitals, which have seen an uptick in competition over the past decade, are scrambling to cash in.

When the government started limiting Turkish nationals’ co-payments to hospitals in 2008, Anadolu experienced a 20-percent loss in income, and “[w]e realized the potential of international clients,” said Dr.Hasan Kuş, the head of Anadolu Hastanesi.

Today, Anadolu Hastanesi has a large office with a multi-lingual team responsible for attracting foreign patients to the hospital and helping them during their stay. In 2002, foreign patients accounted for 4.5 percent of the hospital’s total revenue. This year, Kuş expects that number to increase to 25 percent, with about 5,000 patients coming from more than 30 countries. Patients from the Balkans and Central Asia comprise the largest percentage of foreign visitors.

While private hospitals currently dominate the sector, the government plans to upgrade “some” of the country’s 833 state-run hospitals to accommodate foreign patients as well, the Hürriyet Daily News reported Turkish Health Minister Recep Akdağ as saying.

Most of Anadolu’s foreign patients are referred by hospitals that cannot provide the same level of care, said Mirlan Kabylbekov, the coordinator of Anadolu’s International Patient Department. Anadolu regularly sends Kabylbekov abroad to meet with representatives of other hospitals. Meanwhile, some Turkish hospitals rely on “medical tourism” recruiters.

“About healthcare tourism I have so many worries,” she said. “More and more, I come across travel industry people getting involved and all they care about is the numbers.”

There are few safeguards in place to protect medical tourists from quacks and scams. “How do patients protect themselves? There is almost no protection,” Uzel said.

Nural Kapullu, an Istanbul-based lawyer who handles cases against hospitals and malpractice, said those wishing to file a lawsuit faced a long and arduous legal battle. And Turkish law, he added, does not usually provide for high compensation awards in cases that end favorably for plaintiffs. The long legal process can create logistical hassles, as visa requirements can oblige a foreign plaintiff to leave the country before a case is concluded. “This is really a problem,” Kapullu said. “When the tourist visa ends, his or her problem will not be solved.”

Two surgeons interviewed by EurasiaNet.org agreed that foreign patients have little legal recourse in Turkey. Indeed, hospitals even prefer foreigners because they leave the country after an operation and are unlikely to return if complications occur, they claimed.

Anadolu Hastanesi representatives, however, made no mention of such practices. “Patients are sophisticated enough to search online and look” at Turkish hospitals, said international patient coordinator Kabylbekov. “They check the doctors out before coming.”

Some medical tourism firms, however, aren’t so particular. Ozlem Baro, 26, a former employee of one such Istanbul firm, said her company was always adding new hospitals to its list, but could not visit every one. “They [the firm] always wanted to expand because they were growing so much,” Baro said. “We would drop [hospitals] when bad experiences happened.”

How Turkey plans to address regulatory issues remains unclear. Parliamentarians could not be reached for comment. But, as Turkey’s international healthcare business continues to grow, questions about the regulation of medical tourism are bound to arise.