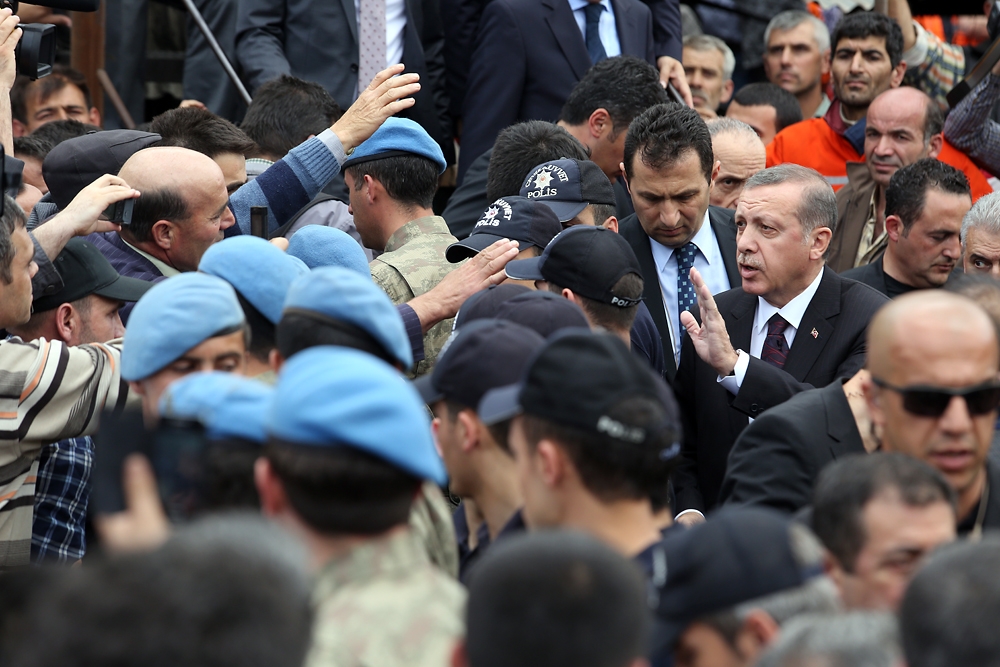 With presidential elections just three months away, Turkey’s May-13 Soma mine disaster, the country’s largest, has proven a huge political embarrassment for the government. Yet despite national protests, Ankara’s response stops short of addressing the larger issue of mine-safety.

Vowing a complete investigation into the deaths of the 301 miners, Prime Minister Recep Tayyip Erdoğan has instead opted for arrests. Since May 18, 24 assigned prosecutors have brought criminal charges against at least five people for allegedly fatal negligence.

But the measure does not go far enough, critics complain.

“This tragedy should have crystallized a more serious response to address the huge failing in mining systems in Turkey,” declared Emma Sinclair-Webb, senior Turkey researcher for the New-York-based Human Rights Watch, after a trip to Soma, in the Aegean west. “The government needs to address this poor record of mining accidents and really make sure in the future this would not happen again and that proper inspections will be put in place for a huge overhaul of safety investigations.”

Before this latest disaster, 1,308 people had been killed and 13,000 injured in Turkish mines since 2002, according to the Turkish Statistical Institute. The country’s rate of fatal mining accidents stands at five miners per 1.27 million tones/tons of mined coal – five times higher than that of China, says IndustriALL Global Union, an international trade-union advocacy group.

IndustriALL Global Union Assistant General-Secretary Kemal Okan argues that Turkey needs a policy on workplace-safety in mines as well as investigations to support such a policy and “proper national records on incidents.”

Currently, information about mine-inspections or detected violations of workplace standards is not public.

Most of the miners killed at Soma are believed to have died from carbon monoxide poisoning or suffocation; in part, for lack of refuge chambers where they could head to escape the explosion.

Government officials could not be reached to explain what long-term reforms now are planned for mine-safety. They also have not explained their reason for rejecting a pre-May-13 request from the opposition Republican People’s Party for an examination of the Soma mine’s worker-conditions.

But pressure for change appears to be growing.

An online petition launched after the Soma accident already has collected 200,000 names of people calling on the government to sign the 1995 International Labor Organization’s Convention on Mine Safety.

This past weekend, hundreds expressed their anger at the government’s handling of the disaster by taking to the streets in spots stretching from Soma to the Turkish capital, Ankara. Police responded with tear gas, water cannons and rubber bullets, while the government placed Soma and the surrounding area under a security-lockdown.

The outrage over Soma builds on years of discontent with the government over a high-profile-corruption scandal, violent police clashes with street-protesters, and rampant crackdowns on government-critics.

The arrests may deflect some pressure from Erdoğan, but with Turkey’s presidential election, in which he is expected to run for office, slotted for August 10, the prime minister must calculate his response carefully.

Ankara has to balance demands for improved working conditions for miners with some hard economic realities. Turkey contains few domestic oil and gas resources to fuel its economic boom, but it does have an abundance of coal.

Developing coal to reduce the country’s dependence on expensive imported energy is a key government priority. Currently, Ankara is courting Qatar for a nearly $12-billion project to develop Turkey’s southern coalfields. All of Soma Mining’s own coal supplied nearby thermal-power stations.

Against that backdrop, the government formerly had cited the Soma mine, privatized in 2005 with Erdoğan’s agreement, as a success story in terms of safety and productivity.

In a 2012 interview with Cumhuriyet newspaper, Alp Gürkan, the chief executive officer of Soma Holding, the mining-and-construction group which owns the Soma Mining Company, boasted that, post-privatization, the mine had seen its production costs drop from $130-$140 per ton of coal to “just under $24 per ton.”

The mine received a full bill of health in March, though several miners have alleged to Turkish media that the company received prior notice of impending inspections.

Some critics have hinted that political interests played a role in preventing stronger pressure to be put on Soma Mining Company about worker-safety.

Ramazan Doğru, the Soma Holding Company executive in charge of overseeing its mining businesses, is married to a Soma town councilor, Melike Doğru, for the ruling Justice and Development Party. Ramazan Doğru is among those arrested for criminal negligence.

Executives from Soma Mining Company insist, however, that no negligence occurred. Gürkan told a May-16 press conference that the company had spent company earnings” to improve working conditions to avoid possible accidents.”

Gürkan also sought to shift some of the responsibility for the disaster to the government. No regulation requires the company to build refuge chambers for miners, he said. Nonetheless, he claimed, the mine had planned to have such facilities within “three to four months.”

Both Gürkan and Erdoğan have stressed that they had never met each other before the prime minister’s May-14 visit to Soma.

Nonethless, the price of the government’s policy toward Soma and other coalmines has become all too clear at least for one survivor.

“[T]here are people here who are dying, people who are injured and it’s all because of money . . . “ Soma miner Özcan Cüce commented to CNN Türk on May 14. “We are not safe doing this job.”