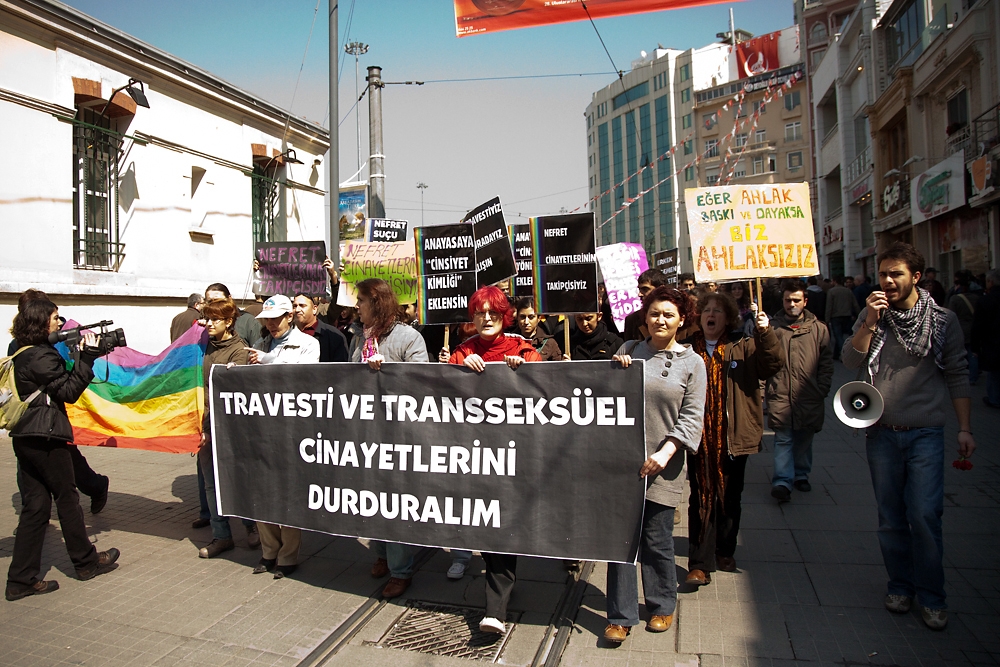 Protesters against LGBT violence march down Istanbul's Istiklal Cadessi street in March 2009 with a sign that says "Stop the killings of transvestites and transsexuals." Even though homosexuality is legal in Turkey, it remains a taboo subject for many families in this predominantly Muslim, conservative society. (Photo: Jonathan Lewis)

In Turkey, when parents discover that their child is gay, violence and even murder can result. But one Istanbul-based organization is fighting to reverse that trend by appealing to the parents themselves.

Even though homosexuality is legal in Turkey, it remains a taboo subject for many families in this predominantly Muslim, conservative society. Meanwhile, the government is contemptuous of the topic of gay rights. Two years ago, for example, then Minister for Family Affairs Aliye Kavaf declared in a newspaper interview that homosexuality is “a biological disorder, a disease."

For retired Sule Ceylan, who is now an artist, the realization that her grown son was gay initially hit her in a similar way. "It was really bad,” remembered Ceylan. “I wanted him to live a false life. I was thinking this can't go on like this.”

Prompted by her son, Ceylan turned to Listag, an Istanbul-based parents’ group of Lesbian, Gay, Bisexual and Transgender (LGBT) individuals. The five-year-old organization uses weekly meetings to provide community support for parents seeking to cope with their children’s sexual orientation. About a dozen parents turn up per meeting.

“The first time we met in a café,” recalled Ceylan. “I was very tense. It wasn't easy for me to meet other parents because I was not ready to open up.”

“Only for my son's sake I went,” she continued. “But we talked. I felt so relieved; it was good to be able to talk about it.”

Listag mother Gunseli Dum, one of the veterans of the group, says their message to visiting parents remains constant. “We simply say, ‘Tell your children that you love them, hug them and don't discriminate against them.’ If the families reject their own children, why wouldn't the society?"

Listag parents travel throughout Turkey, speaking at gatherings of LGBT parents as well as at university symposiums and meetings promoting tolerance. Listag also holds a monthly meeting with a team of volunteer psychologists and psychiatrists.

In the last few years, the organization has added branches in the Aegean-Sea city of Izmir and the capital, Ankara, but attempts to do the same in more conservative eastern cities so far have been unsuccessful.

Listag’s expansion comes as increasing numbers of LGBT children are coming out to their parents, some participants say. “The last 10 years have been very different. The Internet opened up a new world,” observed Ceylan. “Children are not hiding now. They want to express their orientation and they want to live freely.”

But prejudice remains rife in Turkey. Turkish media frequently report about parents attacking or even murdering their gay children in what are often described as “gay honor killings.”

In 2008, Ahmet Yildiz, a well-known gay activist, was shot dead on the streets of Istanbul; the chief suspect is his father, still on the run. Similarly, a colonel in the presidential guard is also on the run from police for allegedly kidnapping his son at gunpoint after the son declared himself gay.

Meanwhile, the Islamic-rooted ruling Justice and Development Party (AKP) has followed up on its controversial stance that homosexuality is a disease. In February 2013, it announced a campaign to bring back to Turkey ethnic Turkish children who had been adopted by Europeans. News that a Dutch lesbian couple had been given care of an ethnic Turkish child sparked the decision.

“Turkish families just do not want to give their kids to gay or lesbian couples,” declared Deputy Prime Minister Bekir Bozdağ.

But Turkish society traditionally has held parents, and, in particular, mothers, in high regard. That gives the Listag group a special voice, one that can be heard by a broad spectrum of Turkish society. “[Parents] can manage to talk to people that we cannot directly talk to,” claimed Metehan Ozkan, a coordinator between Listag and the LGBT-rights group Lambda.

The People’s Republican Party and the pro-Kurdish Peace and Democracy Party support a campaign for LGBT rights to be enshrined in the new constitution, which remains under discussion in parliament. The governing AKP remains staunchly opposed.

“We went there as two mothers and we really startled them,” Ceylan said of the deputies. “They showed a lot of interest in us. They saw that these children are not coming from outer space, they are not freaks. They have mothers, families. They were impressed.”

LGBT groups like Listag hope that with time the rest of Turkish society will come to feel the same.