Turkey: Not Making Eyes at the Eurasian Union -- For Now 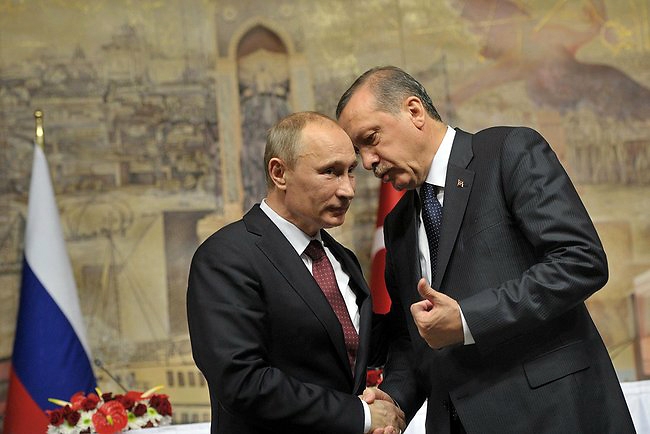 So, tell me a little more about this Eurasian Union. (Photo: Russian Presidential Press Service)

After 26 years of frustration over its start-and-stop bid to join the European Union, would Turkey ever consider joining a rival regional bloc led by the Kremlin? Few observers believe it likely, but it’s not completely out of the question.

In late October, Kazakhstan’s President Nursultan Nazarbayev claimed that Turkish Prime Minister Recep Tayyip Erdoğan had inquired about joining the Moscow-led Eurasian Union, a proposed alternative to the EU. The Russian-led project is envisioned as evolving out of the present customs union, which links Kazakhstan, Belarus, and Russia.  Armenia also recently pledged to join the customs union.

For both Kazakhstan and Belarus, Turkish membership in a Eurasian Union would provide a counterbalance to Moscow, which is seen as standing to reap the most economic gains from the proposed bloc. But “from the point of view of Turkey, things are more complex,” stressed Dr. Rilka Dragneva-Lewers, a senior law lecturer at the United Kingdom’s University of Birmingham and a specialist on economic-integration practices in the former Soviet Union.

Poised between East and West, Turkey has sought membership in the European Union, its largest trading partner, since 1987. After a three-year break, it finally restarted membership talks with the EU on November 5. Yet the going has not been easy.

Lukewarm enthusiasm within the EU for making Turkey a member appears to have cooled still further in the wake of this summer’s crackdown on the Gezi Park protesters. On November 19, Reuters reported that the parties that make up Germany’s coalition government see the talks as “open-ended” with no guarantee of eventual Turkish membership. For its part, Ankara sees its own star rising regionally, and sometimes seems to be running out of patience with Brussels.

Against that backdrop, flirting with a competitive trade bloc might be seen as a way for Turkey to create leverage with Brussels.

Strong economic ties already exist between Turkey and Russia – the two generated about $35 billion worth of trade in 2012, according to official data – and Turkish companies have a firm presence in Kazakhstan and elsewhere in Central Asia.

Turkey’s economic growth rate is slowing – forecast to be no higher than 4 percent in 2013, compared with 9.2 percent in 2010. This fact could press Turkish leaders in 2014 and beyond to try to expand eastward trade as a way to maintain economic momentum, some observers suggest. Recent sticky points in the ongoing dialogue with the EU might also could encourage Turkey to increase its trade with the East.

In addition, Turkish officials worry that discussions among the EU, the United States and Japan about setting up free-trade agreements could leave the Turkish economy out in the cold. “When these agreements come into force, trade flows from the US and Japan to Turkey will be diverted from ‘directly to Turkey’ to ‘indirectly to Turkey via EU markets,’” said Dilek Yiğit, a European-affairs expert in the treasury department under Prime Minister Erdoğan’s office.

Turkish exports to the United States and Japan also could suffer, added Yiğit, who spoke in a private capacity. “It is not a win-win situation.”

While Ankara has not publicly acknowledged any interest in the Eurasian Union, Turkish Foreign Minister Ahmet Davutoğulu recently has begun to tiptoe through the topic of mending ties with Armenia. A rapprochement would be necessary if both countries were to become members of the same economic alliance.

Davutoğulu has stated that he intends to visit Armenia, but has not decided whether to attend the Black Sea Economic Cooperation summit in Yerevan on December 12, Today’s Zaman reported.

While Ankara may be attracted by the notion of the Eurasian Union, it’s unlikely that Turkish officials would be willing to ditch the dream of EU membership entirely, noted one Turkish affairs analyst, adding that membership in both groups isn’t tenable. “With this decision, they would have to give up the [EU] membership objective. It’s nearly impossible to imagine that,” Ali Yurttagül, an adviser to the Greens in the European Parliament, said of Ankara.

He described the current standoff over free-trade agreements as “a temporary difficult period” for relations between Turkey and EU.

Turkish leaders at present are not closing the door on any option. “We will be active everywhere,” Foreign Minister Davutoğulu told a Brookings-Institution audience in Washington, DC on November 18. “Nobody will or can limit our vision."