The MP has been trying to get Turkey to formally recognize the Armenian genocide. 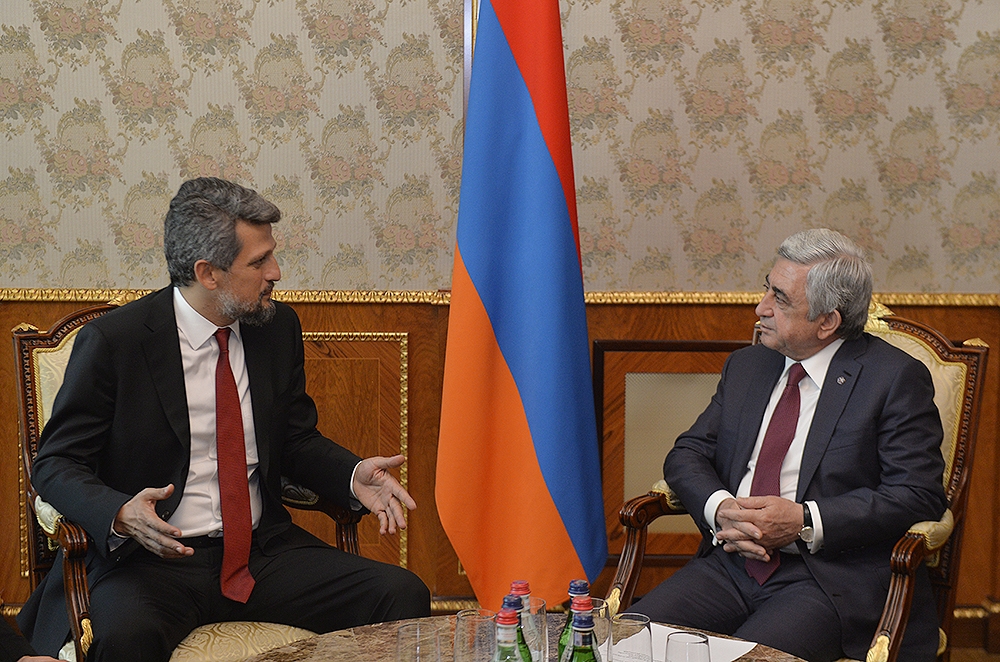 Garo Paylan, a member of Turkey's parliament (left), meets with Armenia's then-president Serzh Sargsyan in Yerevan in 2017. Paylan is now subject of a criminal investigation for insulting Turkey. (photo: president.am)

A Turkish prosecutor has opened an investigation into a lawmaker of Armenian descent following allegations he insulted Turkish people and the state for his remarks about the World War I-era genocide of ethnic Armenians.

Garo Paylan, a member of the opposition Peoples’ Democratic Party (HDP), has been an outspoken advocate for a resolution of the century-old massacres and has used his turn at parliament’s podium to call on Turkey to recognize and offer redress for the genocide, including providing citizenship to the descendants of its survivors. Turkey and most Turks reject claims the wartime killings amounted to genocide.

Now, he is accused of violating the notorious Article 301 of the Turkish penal code, which makes it a crime to “insult” the Turkish people, the Turkish state, parliament, the government, the judiciary and the security forces.

The article has been little used in recent years, but the prosecutor in Ankara charges that Paylan violated it with a parliamentary speech in which Paylan said genocide had claimed the lives of Armenians, Syriac Christians and Greeks in Ottoman lands during the war. It also cited an interview he gave with a Canadian magazine in which he said genocide continued to this day.

The prosecutor wants parliament to lift Paylan’s immunity and also accuses him of the separate crime of insulting President Recep Tayyip Erdoğan.

“I have always recognized that the great catastrophe my family and my people experienced was genocide,” Paylan told the Turkish-Armenian newspaper Agos. “I have never targeted the Turkish people but the junta that perpetrated the genocide at the time and the mentality of genocide.”

Article 301 has been used to prosecute prominent figures for their speech including Hrant Dink, Agos’ editor before he was shot to death outside of the newspaper’s office in 2007. Nobel Prize-winning novelist Orhan Pamuk also ran afoul of the law, which the European Union has lambasted as a violation of human rights.

Kati Piri, the European Parliament's rapporteur for Turkey, railed against the investigation on Twitter. “New line of assault against freedom of speech in Turkey, as opposition MP Garo Paylan faces criminal prosecution for speaking about the Armenian genocide. If even elected MPs cannot express their opinion, where does this leave normal citizens?”

Paylan had already been censured in the assembly for his comments there, barred from three sessions and fined. The measures appear to have done little to deter him. In April, he submitted the first bill of its kind seeking recognition of the genocide and declaration of April 24, the date in 1915 in which Armenians say the genocide began, as a national holiday. The draft law was rejected.

Turkey acknowledges that Armenians were killed during the collapse of the Ottoman Empire but fervently denies it was a state-orchestrated campaign. Some 30 countries and most historical scholars agree with Armenians that 1.5 million people were killed in the genocide.

Long-held taboos surrounding the genocide have eroded over the past decade, and Erdoğan himself each year expresses condolences to Armenian citizens over the loss of life a century ago.

However, some warn of a reversion to earlier constraints on ethnic minorities under a broader crackdown by the government during the state of emergency it imposed following a failed 2016 coup.

On April 24, police barred organizers of a commemoration event from using the word genocide and forced them from their usual spot in central Istanbul, reducing participant numbers dramatically.

Paylan’s party, parliament’s third-biggest group, has been caught up in the post-coup clampdown. Although the left-wing party was not implicated in the coup attempt, the government has accused it of acting as a front for an outlawed Kurdish militant group.

Nine HDP deputies are in prison pending verdicts in their trials on terrorism-related charges; among those jailed is Selahattin Demirtas, the former HDP chairman who is challenging Erdoğan for the presidency in a June 24 election from his prison cell.

Eleven HDP deputies have been stripped of their seats in parliament, reducing their numbers in parliament to 48. The party denies the charges it abets terrorism and accuses the government of disenfranchising its voters during an election campaign.

Trailed by bodyguards wherever he goes, Paylan has become a lightning rod for nationalist outrage. He was physically assaulted during a 2016 commission meeting by members of Erdoğan’s party, whom he accused of targeting him for being Armenian. Late last year, he called a news conference to say he had been informed of intelligence that he faced assassination plots.

He is one of three lawmakers of Armenian origin in the Turkish legislature. They were elected in 2015, during a relatively liberal environment in Turkey. The HDP and the rest of the opposition now accuse Erdoğan of becoming authoritarian to maintain his grip on power after the botched coup attempt failed to topple him.

Before 1915, Armenians represented 40 percent of the population on the territory of today's Turkey. Today, Armenians number just 60,000 in a country of 80 million people.

“Turkey is, unfortunately, returning to its old habits. There is an effort underway to suppress demands for reconciliation with the past,” Paylan said in his statement to Agos. “It should be clear that prosecutors and the government that has paved the way for me to be punished using Article 301 will not force my retreat from my quest for justice both for what we undergo today and in the past.”