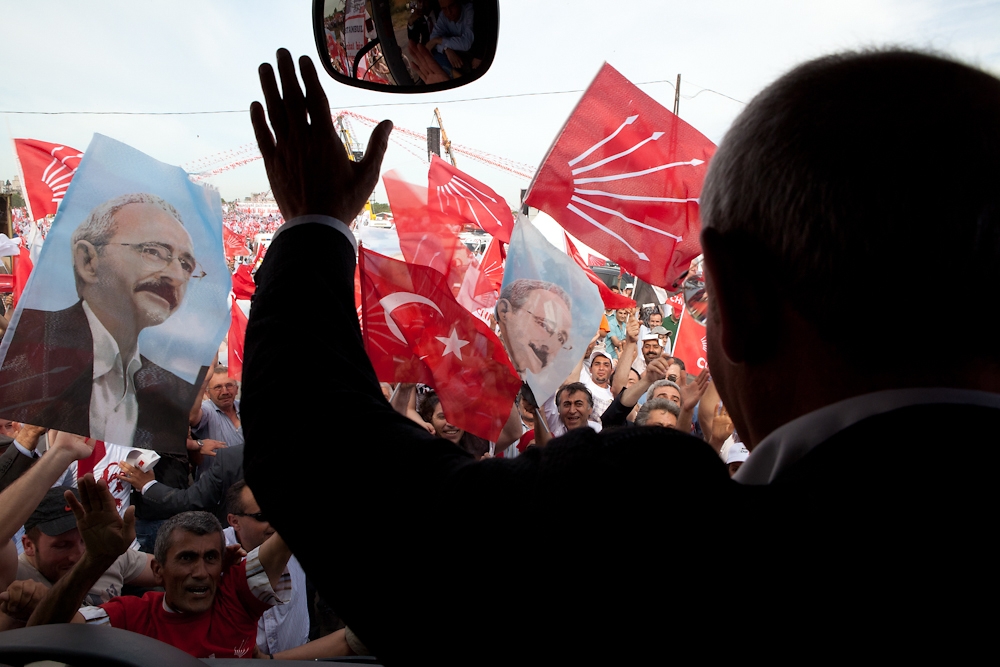 Kemal Kilicdaroglu, leader of the main Turkish opposition party CHP, waves to supporters as he arrives at a rally in Istanbul. (Photo: Jonathan Lewis)

Turks go to the polls on June 12 for a parliamentary election all but certain to deliver victory for the ruling Justice and Development Party. Yet amidst divisive nationalist rhetoric and threats from Kurdish militants, fears of increasing authoritarianism and warnings of an overheating economy, much else regarding Turkey’s future is shrouded in doubt.

Polls and pundits predict Prime Minister Recep Tayyip Erdoğan’s party will win at the very least 45 per cent of the vote, still enough to place it far ahead of the main opposition People’s Republican Party (CHP) and deliver a strong parliamentary majority.

But the extent of the victory will have major repercussions both for Erdoğan’s and Turkey’s future.

Erdoğan, forbidden from serving as prime minister for a fourth term, has announced he will overhaul the country’s coup-era constitution if his party retains power. Many believe he hopes to create a powerful, French-style presidency that he himself would occupy, a goal made easier if he gains the two-thirds parliamentary super-majority allowing him to avoid a referendum on constitutional reforms.

Whether he will achieve this is uncertain. Some analysts believe the AKP will not equal its tally of 341 seats at Turkey’s last parliamentary election in 2007. It requires 367 for a super-majority, and if it fails to gain 330 seats in the 550-member parliament, it will not be able to reform the constitution at all without cross-party support.

Meanwhile, there are signs of green shoots within the CHP under the leadership of the reform-minded Kemal Kilicdaroglu. Most polls and analysts predict it will improve substantially on its 2007 showing of 20.85 percent of the vote.

In the southeast, where the AKP is competing with the Kurdish nationalist Peace and Democracy Party (BDP), restive Kurdish voters have been put off by the AKP’s failure to deliver on pledges of Kurd-friendly political and cultural reforms.
The BDP, whose candidates stand as independents in order to dodge the bar that disqualifies parties with less than 10 per cent of the national vote, is tipped to increase its clutch of seats to perhaps more than 30.

The AKP’s main hope for electoral gains comes from the ailing far-right Nationalist Action Party (MHP), which is in danger of slipping below the 10 per cent threshold. This outcome offers the AKP its only realistic possibility of securing its super- majority.

Some analysts believe these uncertainties helps explain why a man virtually assured of victory has engaged in a campaign in which he has viciously attacked his opponents, and risked deepening Turkey’s political, ethnic and religious rifts.
“It’s a very, very primitive campaign,” said Henri Barkey, a Turkey analyst at the Carnegie Endowment for International Peace in Washington, DC. “It’s not about issues, it’s about who can insult who and who is more macho.”

Over the past weeks, Erdoğan has repeatedly drawn attention to Kilicdaroglu’s family roots in the Alevi religious minority and has dismissed the grievances of Turkey’s restive Kurdish community. Following a number of critical editorials, he has also accused the international press of being backed by Israel.

Ilker Aytürk, a political scientist at Istanbul’s Bilkent University, believes the prime minister’s electoral tactics are likely to succeed, but risk provoking a “crisis of ungovernability.”

“This strategy is based on using very strong language to convince the voters that they have only two options, to force them to pick sides, eliminating all shades of opinion in between two extremes,” Aytürk said.

“This kind of polarization will help [Erdoğan] win power, but it will not help him govern better . . . Even if he gets 50 percent, there will still be another 50 percent who didn’t vote for him, will never vote him, and will think of him as an enemy.”

Even if Erdoğan is in a position to craft a more powerful presidency, others fear he may stir up yet more opposition within his own party.

“Intellectuals and the vast majority of academics and political scientists are against it,” said Sahin Alpay, a columnist for the pro-government Zaman newspaper. “[President] Abdullah Gül and [Deputy Prime Minister] Bulent Arinc have said they oppose it.”

But it is not the only battle he is likely to face. Abdullah Ocalan, imprisoned leader of the Kurdistan Workers’ Party rebel force, has threatened that “all hell would break loose” if the government does not begin negotiations with the guerillas by a June 15 deadline.

In the Kurdish southeast, activists are threatening a campaign of civil disobedience if the AKP fails to deliver reforms granting them greater constitutional rights.

Some fear Erdoğan’s Turkish nationalist rhetoric in the run-up to the election has damaged his chances of ever healing the rift between Turkey and its Kurdish minority of around 15 million.

“I think the AKP could go on and solve all major issues in [the] next parliamentary period, but their election strategy ruined the peace atmosphere,” said Baris Alen, a columnist for the Kurdish Ozgur Haber newspaper. “I am sure that AKP will change their new nationalist discourse and get back to their previous position after the elections. But it has cost a lot of time, energy and motivation.”

Alexander Christie-Miller is a freelance journalist based in Istanbul.