Turkey Pursues a Reset with Uzbekistan 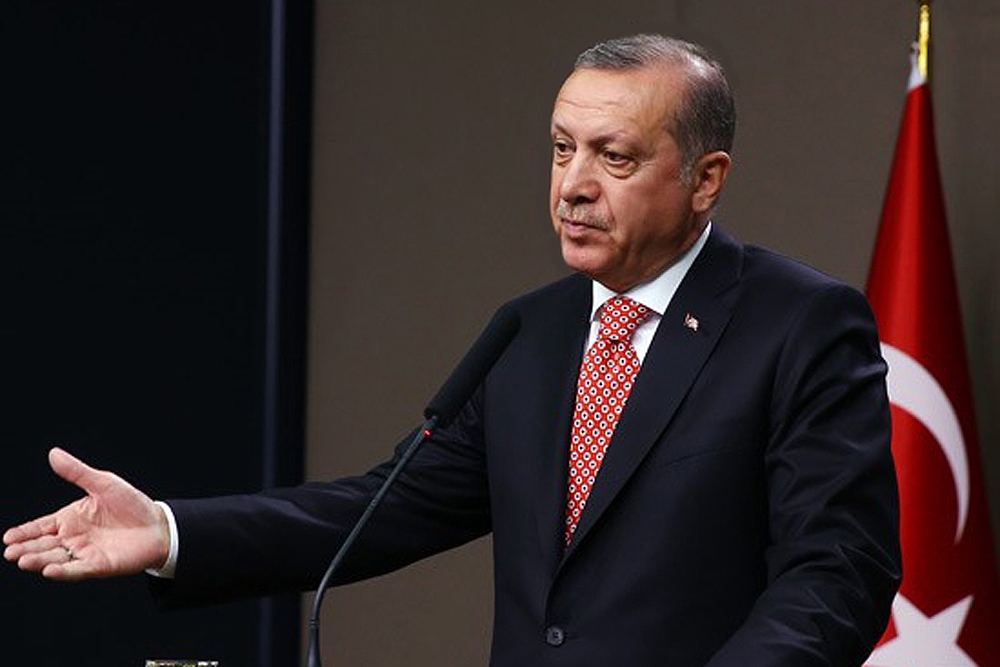 Turkey’s President Recep Tayyip Erdogan speaks at a press conference at Ankara’s Esenboğa International Airport on November 16 before his visits to Pakistan and Uzbekistan. Erdogan, who is accompanied on his tour by a large delegation of Turkish cabinet ministers, members of parliament and representatives of major businesses, told reporters that he wants to “open a new page in ties with our Uzbek brothers.” (Photo: Turkish Presidential Press Service)

The president of Turkey, Recep Tayyip Erdogan, arrived for a two-day visit to Uzbekistan on November 17 in a diplomatic overture that aims to undo more than a decade of frostiness.

Erdogan was due to open his trip with a visit to Samarkand, where he planned to visit the grave of the late Uzbek leader, Islam Karimov. But observers’ attention will be fixed mainly on his meeting with Acting President Shavkat Mirziyoyev for what Uzbek media have said will be an exchange of views on regional and international issues.

The history of relations between Uzbekistan and Turkey since the Soviet Union’s collapse has veered between the sublime and the disastrous.

It all started well.

Turkey was the first country to recognize Uzbekistan’s declaration of independence, on December 16, 1991. Four days later, Karimov became the first leader of an independent Central Asian nation to visit Ankara. “My country will go forward by the Turkish route,” Karimov told his hosts. “We have chosen this road and will not turn back.”

What the Uzbek leader meant was that Tashkent would allay the fears of many — particularly in the Western world — by firmly rejecting Islamism and seeking to embrace a secular, free-market model.

In the early years of the post-Soviet era, Uzbekistan viewed Turkey as a warm ally to which it was naturally drawn through linguistic and cultural affinities. Turkey’s president from 1989 to 1993, Turgut Ozal, was an ardent champion of unity among the Turkic community of nations.

Within Uzbekistan’s first year of independence, Turkey provided its new ally with two million tons of grain and a $590-million loan, repayable in three years. By the middle of the decade, Turkish investments in Uzbekistan had reached $1 billion.

In early 1993, Uzbekistan announced it would be sending hundreds of people to study in Turkish institutions of higher learning. Eventually, almost every region of Uzbekistan hosted Uzbek-Turkish schools, and competition to gain admittance to them was fierce.

But the first seeds of ill-will were also sown in 1993, when Turkey began providing a haven to Karimov’s political rivals. One such individual was Muhammad Solih, a poet and leader of the Erk political party, who had dared to stand against Karimov in the 1991 presidential election on a nationalistic and pan-Turkic platform. When Solih fled Uzbekistan, he initially secured political asylum in Norway. But he later moved to Turkey, where he has been based ever since, much to the chagrin of officials in Tashkent.

Karimov demanded that Solih and another prominent Uzbek opposition leader, Abdurrahman Polat, be expelled from Turkey, but Turkish authorities snubbed the request.

With time, Karimov grew increasingly uneasy at Turkey’s attempts to project its influence not just on Uzbekistan, but on all of Central Asia.

Things grew sour at the turn of the century, when Uzbekistan began taking a firm line against schools operating under the auspices of an organization led by US-based Turkish religious leader Fethullah Gülen, whose followers enraged the Uzbek government by openly proselytizing and urging girls to adopt the headscarf. Gülen schools were banned in Uzbekistan in September 2000.

At that time, and right up until recently, Turkish leaders were tolerant of the Gülen movement’s educational endeavors. But Ankara’s and Tashkent’s vehemently hostile views toward Gülen have now converged. Erdogan has accused the aging theologian of masterminding a failed coup in July.

While political contacts receded over the years, mutual business interests remained strong. All the same, Karimov’s last visit to Turkey was in 1999, while Erdogan went to Tashkent in late 2003, during the first year of his premiership. He has not returned – until now. The last time Karimov and Erdogan met was in February 2014 during the opening of the Winter Olympics in the southern Russian city of Sochi. It was reported in media at the time that Erdogan was planning a trip to Tashkent, but that never transpired.

The latest wave of anti-Turkish policies adopted by Uzbekistan came in late 2011, when authorities closed the Turkuaz chain of supermarkets in Tashkent. In February 2012, Uzbek state television aired a documentary called “Crime and Punishment” that featured alleged legal improprieties committed by Turkish entrepreneurs, who, according to the program, had been detained and later deported. The business owners were accused of dodging taxes and running an underground sewing sweatshop in the basement of their supermarkets. Turkuaz’s assets were later seized by the government.

In another calculated snub that same year, Tashkent city authorities renamed a street dedicated to Mustafa Kemal Atatürk, the Republic of Turkey’s first president. Then, not long after the supermarket scandal, authorities pulled a popular Turkish soap opera, Bride, off the air. Uzbek fans of the program were outraged. But a barrage of letters and phone calls to the television station from indignant viewers had no effect on reversing the decision.

Tashkent’s coolness toward Turkey’s cultural diplomacy was also apparent in Uzbekistan’s steadfast refusal to join the International Organization of Turkic Culture, also known by the compound term TÜRKSOY, which has the development of cooperation among Turkic nations as one its primary missions.

None of this is to say that economic ties do not remain reasonably healthy, albeit falling arguably far short of their potential. According to the Turkish Embassy in Uzbekistan, Turkey’s foreign trade turnover with Uzbekistan in 2015 amounted to $1.2 billion. There are 450 Turkish companies still operating in Uzbekistan, creating $300 million worth of export goods annually, and providing work for 50,000 people.

Before embarking on this week’s visit to Pakistan and Uzbekistan, Erdogan implicitly signaled that his intention is to pursue a reset in relations. “We want to open a new page in ties with our Uzbek brothers,” he told reporters in Ankara this week.

Tashkent-based political analyst Anvar Nazirov said Uzbekistan ought to seek membership in TÜRKSOY as an opening gambit in the budding rapprochement. “Turkey is the world’s 18th largest economy and has good investment potential for Uzbekistan. It is also a good time to resume the broadcasts of Turkish television stations … so as to reduce reliance on Russian television stations,” Nazirov told EurasiaNet.org.

The interests in broadening economic partnership are mutual. Foreign direct investment into Turkey fell by more than 50 percent in the first half of 2016, even before the attempted coup, which only further depressed economic confidence in the country. With the West growing ever more apprehensive at the relentless political crackdown on entire swathes of the opposition in Turkey, there has been some talk of sanctions.

Uzbekistan routinely claims buoyant economic growth, but high rates of unemployment, a weakening currency and the dismal investment climate tell another story. Since Karimov’s death, Tashkent has embarked on a diplomatic charm offensive with its neighbors, and this friend-making mission now looks set to be extended further afield.

“The era of Karimov is a thing of the past. [Acting President] Shavkat Mirziyoyev is a pragmatic leader and he has good prospects of opening a new chapter in Uzbek-Turkish relations. Recep Tayyip Erdogan managed to revive relations with Russia, so it means he could repeat the feat in Uzbekistan,” Matnazarov said.