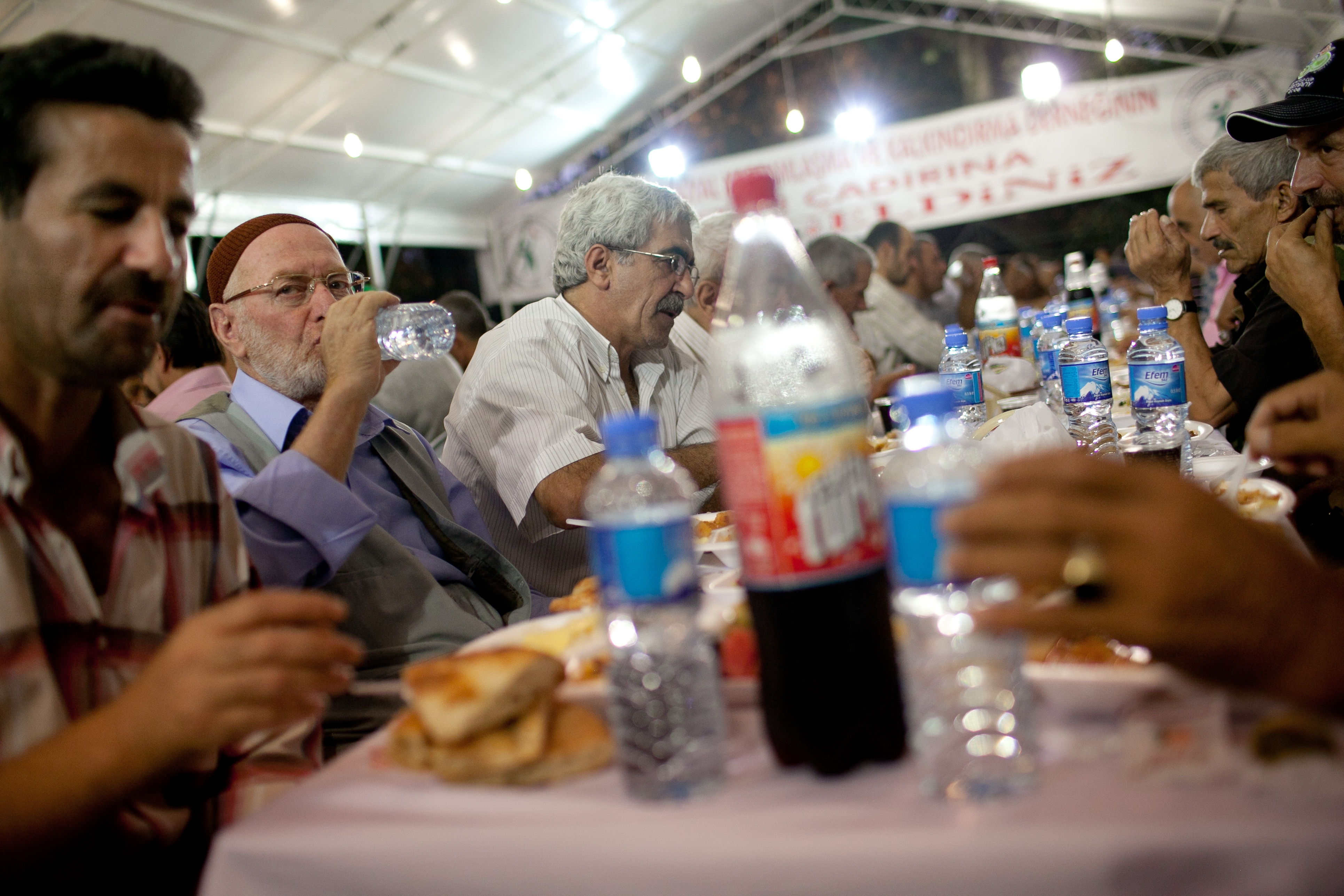 Men break fast with a short prayer and a sip of water during a charity iftar dinner in the Tophane neighborhood of Istanbul on August 27. (Photo: David Trilling)

Gezi Park in downtown Istanbul has become the battleground in a struggle over the significance of Ramadan and a growing concern over the chasm that has opened between rich and poor in Turkish society.

Each weekend during Ramadan, the Islamic holy month of fasting, which ends on August 29 in Turkey, the Labor and Justice Forum, an unlikely coalition of socialists and religious-minded people, has offered a free Iftar, the meal that breaks the day’s fast. The simple offering of soup, olives and cheese for several hundred people is not only a charitable event, but also a protest against many Turks’ conspicuous display of wealth during Ramadan.

"Ramadan is a time that we have to remember the poor and remember that we can be hungry sometimes and we have to give our money to [the] poor,” commented Rumeysa Camdereli, a university student and one of the protest organizers. “This is what the protest tries to say to people who are having their [Iftar] meals in luxury hotels.”

The Gezi Park Iftar is held in the shadow of some of Istanbul's top five-star hotels, towering buildings that are among the most visible signs of the economic transformation of both Istanbul and Turkey itself.

Much of the prosperity from Turkey’s near-decade-long run of robust economic growth (8.9 percent in 2010, according to official data) has gone to a rapidly expanding, pious middle class – people who are primed for conspicuous consumption. For many, that means breaking fast with a fashion statement.

Istanbul’s Ceylan InterContinental, a five-star hotel only a few meters away from the protest Iftar in Gezi Park, is one of the most popular destinations for such occasions. A slowly roasting lamb on an open fire is the centerpiece of the hotel’s luxurious Iftar menu; meal prices range from the equivalent of $131 to $221 per person, depending on the hotel restaurant chosen, according to one review.

But Ilker Sonuk, the manager of Ceylan InterContinental’s Garden Grill restaurant, believes there is no contradiction between luxury and the spirit of Ramadan; it is just a question of choice.

Lavish Iftars have become the place to network for politicians, too. Leading members of the governing Justice and Development Party (AKP) have become increasingly frequent guests at the lavish feasts.

But, at the same time, they often appear to know that these repasts could prove a political handicap – particularly among the AKP’s grassroots supporters.

Filmed by Turkish television attending an Iftar banquet at one five-star Ankara hotel, Parliamentary Speaker Cemil Cicek did a quick about-face and joined the chorus of critics of luxury Iftars.

"This should be the last Ramadan meal that we are to have in such a setting," Cicek said. "Believe me, there are people who need the crumbs of the food that you will send back to the kitchen." The televised remarks drew applause from many embarrassed diners.

"There is a growing unease that Muslims are selling their souls to capitalism," wrote Nuray Mert, a columnist for Milliyet, a daily newspaper that is often critical of the government. Mert added that the Gezi Park protest is a warning to the AKP.

The AKP likes to position itself as the party of the poor. But despite record economic growth, the number of Turks in poverty has not decreased since the party came to power in 2002. Turkstat, the official statistics agency, reports that the number of people living below the poverty line has remained stubbornly at around 18 percent.

Stung by the public outcry against ostentatious Iftars, Prime Minister Recep Tayyip Erdoğan also has criticized the events. "Go and find the poor and join him in his Iftar meal. Don't go to the Iftars of rich people,” he instructed AKP members, one Turkish newspaper reported. The comments preceded an August 17 tirade by the prime minister about the excesses of capitalism and the Western world’s alleged failure to relieve the famine in Somalia.

Whether the remarks found a sympathetic audience among participants at the Gevi Park Iftar remains unknown, but the anger at luxury Iftars does not look set to end with Ramadan.

Gulhan Eraslan, a university student, traveled several hundred kilometers to take part in the protest. "While some people can't even find food to eat, there are others who pay $300 for an iftar meal . . . This can't be acceptable for Iftar at the end of fasting,” Eraslan fumed. “The meaning of fasting is for all Muslims to be equal and to understand each other's situation."

The extent to which Turks are, in fact, able to do that could prove the Achilles’ heel of the country’s economic success story.