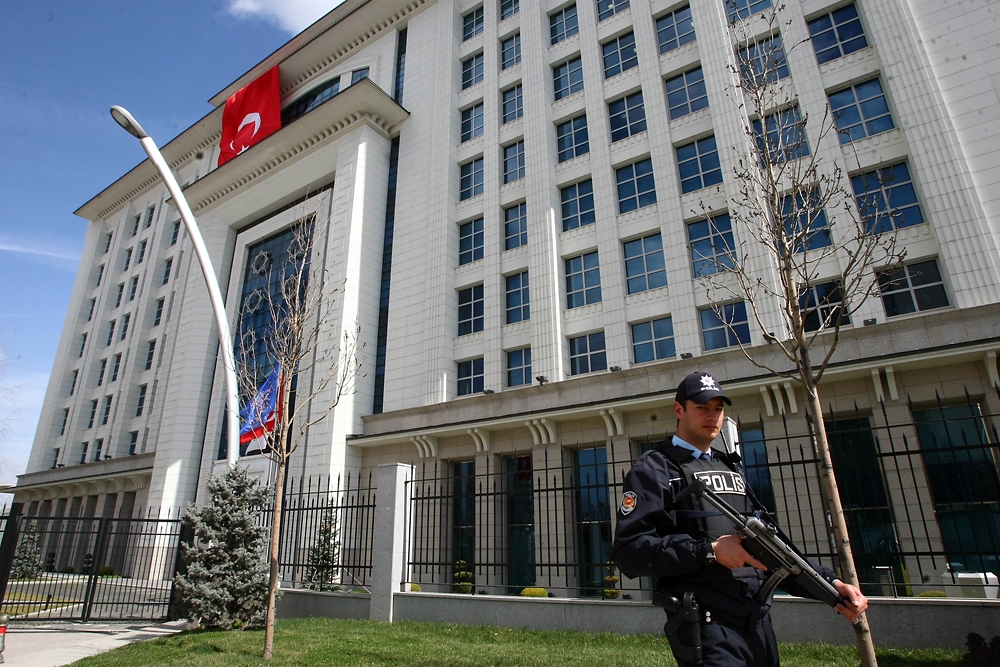 A Turkish flag covers the damage created by a rocket attack a day earlier to Turkey's ruling Justice and Development Party (AKP) headquarters in Ankara. Turkey’s parliament is considering changes to the country's anti-terrorism law, which has been criticized by the European Court of Human Rights. (Photo: Adem Altan/AFP/Getty Images)

This month, the Turkish government sent to parliament a major judicial reform package that it claims will change once and for all Turkey’s bad-boy image at the European Court of Human Rights. But critics say the initiative will not enable substantive change of Turkey’s controversial anti-terrorism law.

Following March 19 attacks in Ankara against the Ministry of Justice and the governing Justice and Development Party’s headquarters with grenades and a light anti-tank weapon, the political atmosphere in Turkey is hardly ripe for far-reaching changes. Expectations of a peace deal with Kurdish rebel leader Abdullah Öcalan already had the government cautious, one observer said.

The proposed reforms are intended to end Turkey’s record run of violations of the European Convention on Human Rights, according to Justice Minister Sadullah Ergun, the architect of the legislative package. Currently, Turkey is facing over 16,000 cases in the Strasbourg-based European Court of Human Rights, second in volume only to Russia.

Most of the proposed changes would affect the country’s draconian anti-terrorism law. Turkey has accounted for a third of the 38,000 convictions for terrorism worldwide since the September 11, 2001, attacks in New York City, according to an Associated Press survey carried out in 2012.

Under the reforms, writers and journalists convicted of speaking out in favor of terrorism would be “immediately released” from prison, Justice Minister Ergun said. Only those who have incited violence directly could be charged with spreading propaganda about terrorism.

Emma Sinclair-Webb, the New-York-City-based Human Rights Watch’s Turkey researcher, called the change a “positive step,” but cautioned it would have limited effect.

“Most people are not in jail for terrorist propaganda, but are in jail for membership [in] a terrorist organization,” she noted. “There, the threshold of evidence, the burden of proof is so much lower, that all sorts of legitimate activities get counted as membership in a terrorist organization, even though the person has not advocated violence or directly committed violent activities.”

Under the anti-terrorism law, any individual can be considered a member of a terrorist organization if he or she writes or says a phrase considered to express the same view as that of a banned terror group. The reform package does not address this provision of the law.

French exchange student Sevil Sevimli became one of the best known examples of this charge when, in February, she was sentenced to five years in jail for “terrorist propaganda.” Among the evidence against her was the alleged display of a protest banner calling for “free education,” which also happens to be one demand of a banned leftist group. Sevimli was eventually released on bail pending appeal.

According to the Justice Ministry, over a thousand students are in jail awaiting trial or have been convicted of membership in a terrorist group. The reforms could see many of those awaiting trial released on bail, under an easing of penalties in some anti-terror cases.

Critics already claim that the reform package is nothing more than elaborate window dressing. While “expectations” existed for real change, “all we have seen is … a drop-by-drop approach,” said political scientist Professor Cengiz Aktar of Istanbul’s Bahçeşehir University. “We are very far from the opening of the prison doors [for] all those imprisoned journalists, and those imprisoned for very minor offenses that are treated as a major terrorist offense.”

The package is flawed because it fails to address a key underlying issue, according to Riza Türmen, Turkey’s former judge at the European Court of Human Rights and now a member of parliament for the opposition People’s Republican Party. “The problem is they did not touch this very broad definition of terrorism. Any activity can be considered a terrorist activity … with this reform, there won’t be any change in this situation.”

As of December 2012, the anti-terror law had led to the imprisonment of at least 49 reporters, making Turkey the world’s most active jailer of journalists, according to the New-York-City-based Committee to Protect Journalists. Turkish Prime Minister Recep Tayyip Erdoğan insists there are less than five reporters jailed for their work. The rest he claims are being held for violent crimes.

That trend is unlikely to change. In January, another 11 scribes were jailed on charges of belonging to a banned leftist group, the DHKP/C. The DHKP/C has been linked to the March 19 attacks in Ankara, and earlier took responsibility for a February 1 blast at the US embassy that killed one person.

Human Rights Watch’s Sinclair-Webb, who was consulted by the Justice Ministry ahead of its reform initiative, admits she is “disappointed” by its scope. Ongoing peace talks between the government and the rebel Kurdistan Workers’ Party (PKK) could be one factor behind the lack of sweeping changes, she noted.

“It’s a critical time and the government may not think it to be conducive to the large-scale release of Kurdish activists at this moment,” she said of changes to the anti-terror law. The main beneficiary of any such change would be the thousands of members of the pro-Kurdish Peace and Democracy Party, currently held in prison under charges of being PKK members.

But former European Court Judge Türmen claims a pattern is emerging of failed promises. “This is the fourth reform package [since the Justice and Development Party came to power in 2002] and with all of them we have only seen cosmetic changes,” he said. “I am afraid the number of cases going to the European Court will continue, if not get worse.”