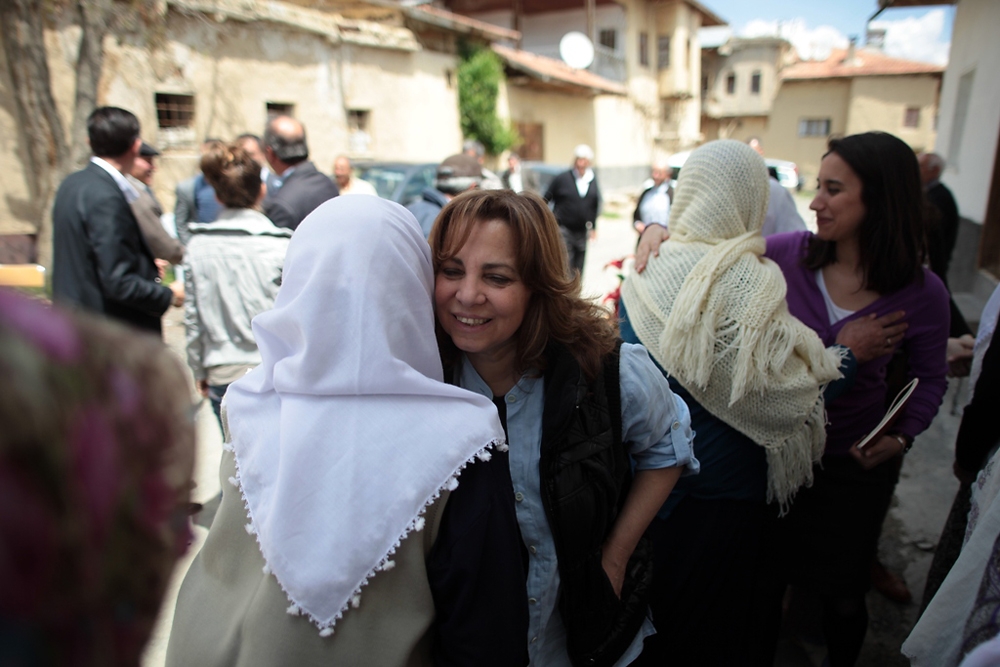 In a room adorned only with a portrait of Kemal Atatürk, Celal Yilmaz, head of the Alevi village of Kayaburun in eastern Turkey, listens carefully to a surprise request -- a town-hall meeting with a female parliamentary candidate from the ruling Justice and Development Party.

“Even if you don’t agree with what she represents, come to the meeting to tell her this,” a Justice and Development Party (AKP) activist urges the muhtar.

Like most of the inhabitants of Kayaburun and other nearby villages, Yilmaz is an Alevi, a Muslim minority related to the Shiite branch of Islam that has long struggled with discrimination in this majority Sunni country.

Rather than the Islam-influenced AKP, Alevi villages, known for their strong communal identity, have traditionally given their votes to Atatürk’s Republican People’s Party, a group that stresses secular values and a common Turkish identity.

But now, as Turkey’s June 12 parliamentary elections draw near, the Justice and Development Party, after nine years in power, is trying to break with tradition and woo these forgotten villages with promises of asphalted roads, modern apartments and a tourist boom.

At the same time, the government is trying to promote female parliamentarians in a bid to counter accusations that its appointment of just two women to a 25-member cabinet smacks of patriarchy.

Fifty-four-year-old candidate Nursuna Memecan is the envoy tasked with trying to score local points for the AKP on both counts.

The Istanbul businesswoman and parliamentarian, who is close to President Abdullah Gül, was educated at elite Turkish institutions and hails from a respected republican family. As the granddaughter of famed industrialist and local benefactor Nuri Demirag, she can also command the kind of respect that few other women candidates yield.

In these Alevi villages, though, even with their tradition of greater female participation in public life, Memecan and the AKP face an uphill struggle.

An alleged United States Department of State document published by Wikileaks reported that perceptions of “the AKP’s strong Sunni Islam bias” means that “[o]nly 11 percent “ of the estimated 8 million to 30 million Alevis believe the Turkish government is “sincere.”

Successive Turkish governments have refused to grant the Alevi community the right to practice its faith freely. Despite the addition of information about their beliefs to religious textbooks and a series of AKP-proposed workshops intended to normalize relations, little progress has been made toward reconciliation between Alevis and the country’s Sunni Muslim majority.

In Kayaburun, though, curiosity eventually appears to get the better of such misgivings. Half an hour after Yilmaz goes on the village PA system to announce Memecan’s arrival, a few dozen men have assembled in a school classroom to hear the candidate talk about her plans for developing the region.

In other Alevi villages, voters openly attacked Memecan for representing the AKP, an organization they often consider corrupt. But in this village, the concerns are less ideological and more practical.

After Memecan finishes speaking, the muhtar lays out the village’s requests: a new reservoir, low-interest loans for farmers, the repair of a village bridge and the construction of a cemevi, an Alevi meeting house.
One member of the audience adds a complaint: “We’re sick of being second-class citizens,” he said.

After a few more minutes of debate, Memecan emerges from the meeting looking refreshed for not having come under attack.

“It messes up my mood and breaks my will when the campaigning goes wrong and I get negative energy from my interlocutors,” she said.

Gunes Tezcur, a professor of political science at Chicago’s Loyola University who wrote his dissertation on the AKP’s first election campaign in 2002, calls the venture “a political learning experience” for the urbanite Memecan.

“On the flipside, as an educated outsider, she can be more accepted than a local Sunni politician and won’t attract as much anger and hostility,” Tezcur said.

Yet locals appear underwhelmed when she walks through the town bazaar and visits their shops. The next day, in the market at Divriği, a nearby small town, Memecan encounters some pursed lips and narrowed eyes.

“People have the welcoming culture more in the villages,” observed Huseyin Kirac, a campaign organizer whose soothing tones often fill awkward silences on the campaign trail. “Here, they are colder, more direct.”

Still, the atmosphere is upbeat when a strategy meeting is convened the next day over a traditional breakfast of salads, steaming meat and cheese borek pastries, fresh bread and endless cups of tea.

Reviewing their performance, the team conclude that several of the Alevi villages, including Kayaburun, could indeed be won over to the AKP with follow-up visits ahead of the June 12 elections.

Whether or not that prediction will prove correct, the AKP, according to Tezcur, at least has been able to indulge in “the luxury of experimenting.”