Turkey-Russia Antagonism Playing Out in Karabakh 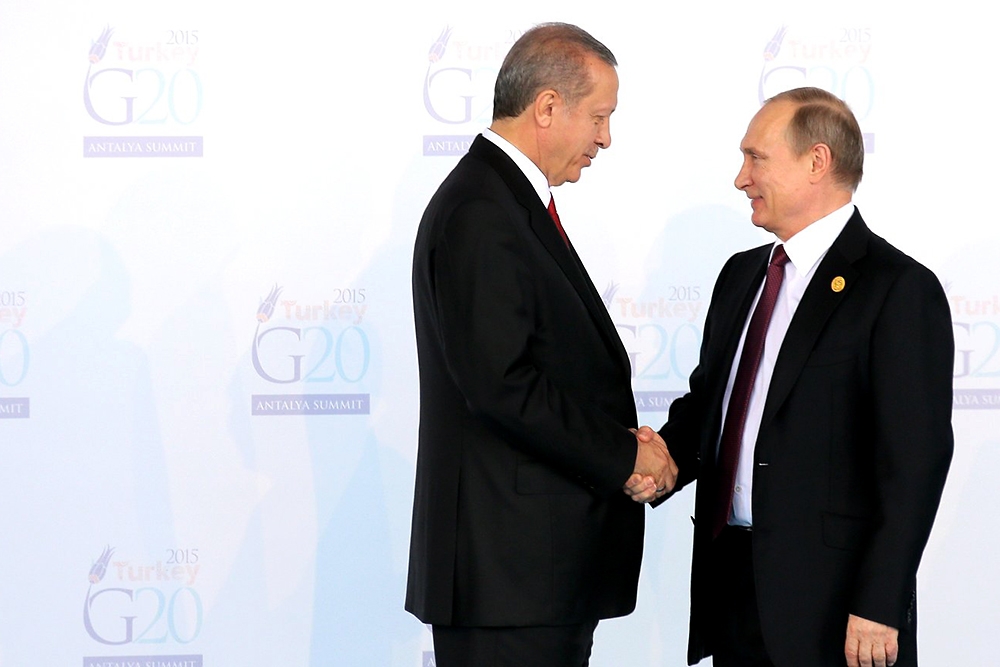 All smiles before the Russian jet shoot-down and the renewed fighting over Nagorno-Karabakh. (Photo: Russian Presidential Press Service)

The enmity that has been building between Turkey and Russia is spilling over into the Karabakh conflict.

Heavy fighting in Karabakh between Armenian and Azerbaijani forces on April 2-5 marked the bloodiest point of the decades-long conflict since 1994. A two-day-long ceasefire appeared at risk of collapsing on April 7, as both sides accused the other of violations.

The Karabakh conflict now threatens to turn into a proxy fight between two regional powers – Turkey and Russia. Bilateral relations between the two states went into a tailspin last November, when the Turkish military shot down a Russian jet on a mission in Syria. Ankara has rankled Moscow with clear-cut statements of support for Azerbaijan, a country with which Turkey has close linguistic and cultural connections.

“We are today standing side-by-side with our brothers in Azerbaijan,” Turkish President Recep Tayyip Erdoğan told an Ankara audience on April 4, “but this persecution will not continue forever. Karabakh will one day return to its original owner. It will be Azerbaijan’s.”

Taking his cue from the president, Turkish Prime Minister Ahmet Davutoğlu chimed in the next day that “Turkey will stand shoulder-to-shoulder with Azerbaijan until doomsday against Armenia’s aggression and occupation.”

Turkish analysts say the Karabakh conflict has captured public attention. “The fighting [in Karabakh] has touched a very sensitive chord in Turkish hearts,” noted Murat Bilhan, a former Turkish ambassador and deputy chairperson of the Ankara-based, government-friendly Turkish Asian Center for Strategic Studies. “Whether [the Azerbaijanis] are right or wrong, they are supported.”

Statements of solidarity with Azerbaijan also may have a domestic political purpose for Erdoğan and his administration, some political analysts contend. By stirring up patriotic, pan-Turkic feelings at home, Erdoğan may be hoping to attract nationalist support for his own attempt to push through constitutional amendments that would enhance his presidential powers. “The Turkish president is using everything to cajole the nationalist voters and every occasion to use and abuse this nationalist sentiment,” argued political scientist Cengiz Aktar of Istanbul’s Süleyman Şah University.

Erdoğan earlier took aim at international mediators – Russia, the United States and France – tasked with overseeing peace talks on Karabakh under the auspices of the OSCE’s Minsk Group. The Turkish president asserted that “if the Minsk Group had taken fair and decisive steps” to resolve the conflict, the outbreak of violence that day [April 2], the worst since the 1994 ceasefire, would not have occurred.

Some observers have interpreted his words as a disavowal of diplomacy.

Sinan Ülgen, a visiting specialist on Turkish foreign policy at the Carnegie Europe think-tank in Brussels, underlined that Erdoğan’s words are indicative of a potential policy shift, and “certainly point to a different, a more activist direction that Turkey is willing to [take].”

The government’s choice of words also is a matter of concern for political scientist Aktar. “The entire international community is calling on all sides to stop the fighting, whereas Turkey is [the] only country which openly call[s] … [on] Armenia to stop fighting and declares to the entire world that it is behind Azerbaijan, and this is very unusual and very worrisome.”

The rhetoric of Turkish officials has grabbed the attention of Armenian and Russian media, which contend that Turkey is intervening on Azerbaijan’s side, and thus complicating efforts to bring a halt to the fighting.

Government-linked or financed Russian media have launched a broad-based smear campaign against Turkey. The Sputnik news service regularly reposts claims from Armenian politicians and officials that cast Turkey as a regional troublemaker. “Syria is not the only place where the Turkish government keeps putting spokes into others’ wheels,” one article observed.

Other Russian outlets have not hesitated to spread unsubstantiated rumors. For example, citing an unnamed “military source,” LifeNews TV, an outlet allegedly close to the Russian security services, reported on April 4 that “between 50 and 60” Azerbaijani ISIS fighters were traveling back home from Syria via Turkey to join the Karabakh fight.

Until now, Russia has sought to maintain a relative balance in its relations with Armenia and Azerbaijan.  While Russia is widely considered to be Armenia’s strategic ally in the Caucasus, the Kremlin has tried to maintain “parity” in recent years in its arms sales to Yerevan and Baku. The question at this stage that some experts are asking is: if heavy fighting erupts again, will Russia start siding more clearly with Armenia to counter Turkish support for Azerbaijan?

Regardless of whether Karabakh developments in the coming weeks start pushing Russia toward Armenia, the renewed fighting in the contested enclave seems sure to complicate efforts to bring about a thaw in Turkish-Russian relations.

Bilhan, the retired ambassador, expressed hope that existing tension could be set aside soon. “These countries need one another, be it in trade, energy. I don't see how they will deny one another these benefits,” he said.

Others are not optimistic that reason can prevail any time soon.

“The few signs of normalization between Turkey and Russia are just weak signs,” cautioned Ülgen. “There is no reason to expect normalization will happen anytime soon, given that acrimony has become quite personal between Erdoğan and Putin.”