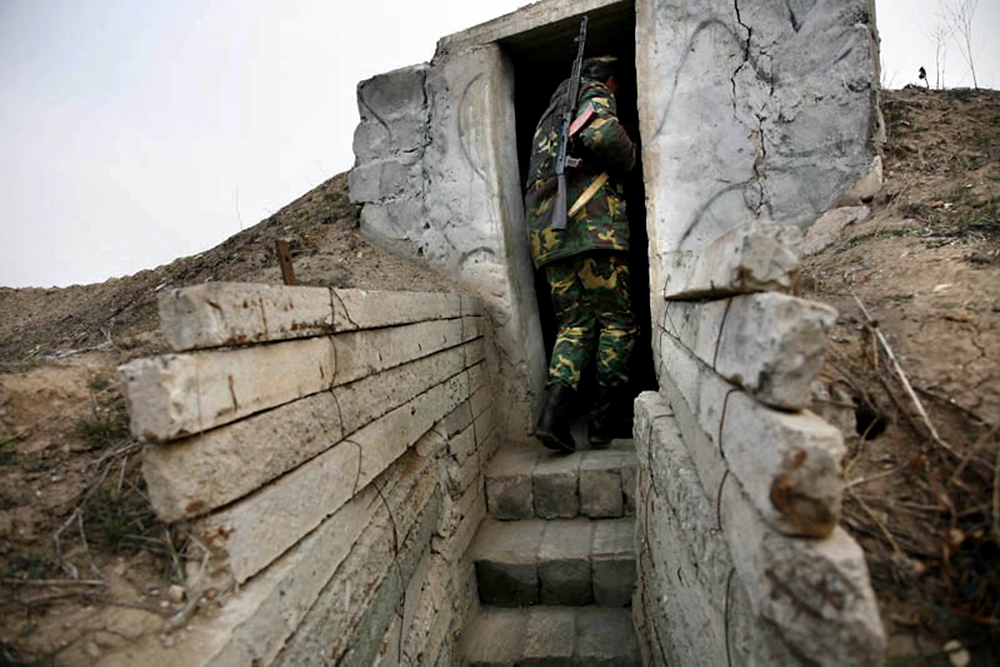 A soldier with the breakaway region of Nagorno Karabakh enters a fortified bunker on the frontline with Azerbaijan near the town of Agdam in August 2012. The standoff between Russia and Turkey could strain allegiances and political relations with countries in the South Caucasus. (Photo: Justyna Mielnikiewicz)

Sandwiched between Turkey and Russia, and for centuries a battleground for the erstwhile empires, the South Caucasus is bracing for fallout from the geopolitical furor sparked by the Turkish downing of a Russian fighter jet.

Memories of multiple Ottoman-Tsarist wars that ravaged the South Caucasus from the 17th to the 20th centuries still exert influence over public opinion in the region. But modern-day issues wield the most influence in shaping loyalties, splitting the region into pro-Turkey and pro-Russia camps. The three states in the region – Armenia, Azerbaijan and Georgia – are coming under growing pressure to choose sides following Turkey’s November 24 shoot-down of the Su-24 fighter.

Armenia, Russia’s main, if only, committed ally in the South Caucasus, has been quick in unequivocally backing the Kremlin. With no diplomatic ties with Turkey to worry about, Yerevan essentially has echoed Russian President Vladimir Putin’s “stab-in-the-back” line about Turkey’s conduct.

Armenian public opinion backs Moscow’s military objectives in Syria, according to policy analyst Vahram Ter-Matevosian, a lecturer at the American University of Armenia. Prior to the outbreak of the civil war, Syria had been home to a large ethnic Armenian Diaspora. Meanwhile, Russia has long been a guarantor of Armenia’s security, a status underscored by the presence of a Russian military base in the northern Armenian town of Gyumri, not far from the Turkish border.

With Russia’s actions in Syria possibly set to expand, Moscow might look to use Gyumri as a “lily pad” facility that supports its Syrian campaign.

The “increasing military engagement of the Russian armed forces in this war [in Syria] will require huge resources,” said Ter-Matevosian. “Armenia is the closest [place] to the Syrian front where Russia has military bases. Hence, Armenia, as Russia’s strategic ally and a CSTO [Moscow-led Collective Security Treaty Organization] member, may be asked to contribute.”

The possibility of Gyumri becoming as a Russian staging area is a source of some trepidation in Yerevan. With memories of the Soviet Union’s 1979-1989 failed intervention in Afghanistan still fresh, “Armenia is not interested in becoming the second Tajikistan,” Ter-Matevosian said. Tajikistan, a former Soviet republic bordering on Afghanistan, provisioned many of the Soviet troops fighting there.

To the north of Armenia, the public reaction in Georgia to the Su-24 incident has largely been shaped by the country’s 2008 war with Russia. Frustrated with what they see as the West’s spineless reactions to Russia’s harassment of its neighbors, many Georgians applauded Ankara for standing up to Moscow.

At the same time, the Georgian government, a Turkish energy ally which recently has tried to normalize its post-war ties with Russia, took a more careful stance.

“Nobody needs another conflict and with a NATO member,” said Georgian Defense Minister Tina Khidasheli in a televised statement. Khidasheli expressed confidence that Turkey, as a responsible player, would take diplomatic steps to keep tensions with Russia in check.

While the Turkish-Russian spat is expected to stir up tension in the Caucasus over the short term, some observers in Tbilisi hope the Su-24 shoot-down could reinvigorate the country’s efforts to join the North Atlantic Treaty Organization.

“Russia violated Georgian airspace on multiple counts … so the fact that Turkey did not tolerate this unlawful act should send a signal to the Georgian population about the benefit of closer integration with the North Atlantic Alliance,” said Giorgi Mchedlishvili, a professor of international relations at Tbilisi’s International Black Sea University, a Turkish-co-founded institution.

Turkish-Russian rancor poses a deep dilemma for Azerbaijan, Turkey’s ethnic kin and its closest ally, analysts say. “The number one question is how far Russia will take its aggression against Turkey, and will it extend to Turkey’s partners?” said Zaur Shiriyev, an independent foreign policy analyst in the Azerbaijani capital, Baku.

While the Azerbaijani government has developed an authoritarian bond with the Kremlin in resisting Western criticism on civil-rights issues, Turkey provides the gateway for Azerbaijan’s oil and gas exports to the West. Despite plans for joint oil production with Iran, Azerbaijan, as yet, has no substitute for Turkey.

“It is clear that Russia can’t be an alternative to Turkey in the broad perspective. But also Azerbaijan cannot risk poor relations with Moscow,” noted Shiriyev.

Azerbaijani leaders are concerned that Moscow might “retaliate on the Karabakh front” for any potential wrong move Baku makes, said Altay Goyushov, a political commentator and former professor of Turkic history at Baku State University. Russia serves as a mediator in Azerbaijan’s decades-long conflict with Armenia over the breakaway territory of Nagorno Karabakh.

Helping to heighten concern in Baku, Russian media outlets have framed Turkish Prime Minister Ahmet Davutoğlu’s November 26 comment that Ankara will do “everything possible to free the occupied lands of Azerbaijan” as a challenge to Moscow.

President Ilham Aliyev and other top officials have refrained from commenting on the Su-24 incident, other than to extend an offer to mediate between Turkey and Russia.

“It is a very delicate situation for Aliyev,” noted Goyushov. “He does not want to choose sides, but the public is firmly on the side of Turkey. If Turkey builds up pressure, Aliyev will not have a choice.”

All three countries may see some short-term economic benefit from the situation. Exports of fruit and vegetables could fill the void left by Russian restrictions on trade with Turkey. Georgia, in particular, could benefit from increased numbers of tourists after Moscow reduced air links to Turkey and warned against tours there, Mchedlishvili predicted.

But regional observers tend to agree that the countries of the Caucasus have far more to lose than gain from an ongoing Turkish-Russian confrontation. The “rivalry will bring no benefit to the volatile region of [the] South Caucasus,” said Ter-Matevosian. It never did, he added.