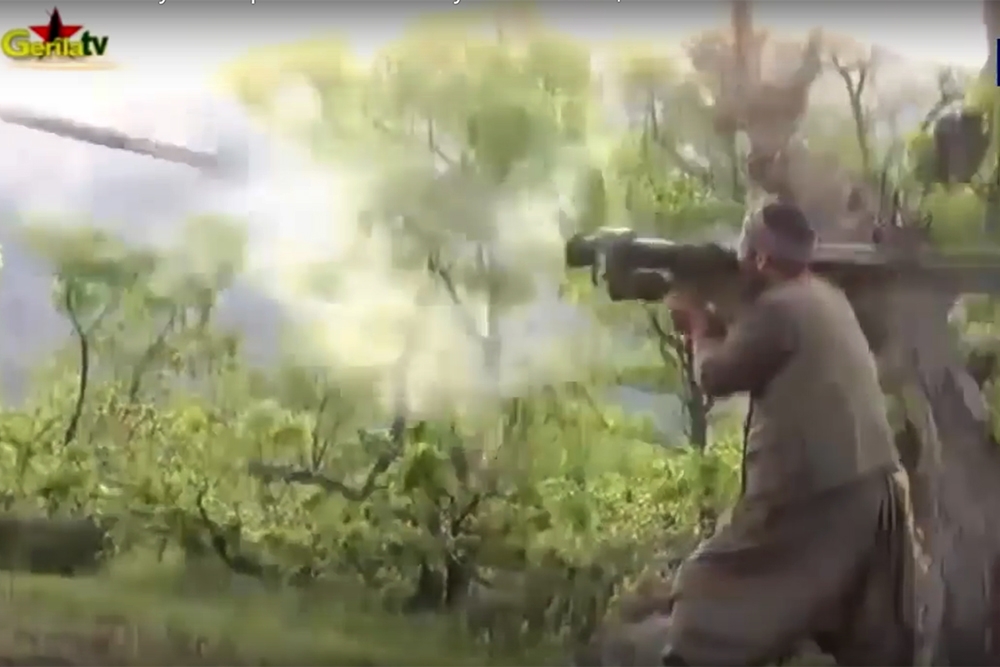 A frame grab of a video shot and posted on a pro-PKK social media site shows the claimed shoot-down of a Turkish military AH-1W Super Cobra helicopter on May 13. (Video Frame Grab)

Kurdish rebels’ “game-changing” downing of a Turkish attack helicopter with a Russian-made missile could further intensify still simmering hostilities between Ankara and Moscow.

Coming nearly six months after Turkish jets’ downing of a Russian bomber operating from a Syrian airbase, the May 13 incident made front-page news in Turkey. “It was a message to [the] government and public,” commented Metehan Demir, an independent defense analyst and former Turkish military pilot.

The missile featured in a Kurdistan Workers’ Party (PKK) video of the attack “is a Russian-made SA18 or SA24,” he noted, using the North Atlantic Treaty Organization codenames for the shoulder-held, anti-aircraft missiles 9K38 Igla (“Needle”) and 9K338 Igla, manufactured since Soviet times in the Russian town of Kolomna.

Two pilots died in the crash, which Ankara initially attributed to a technical malfunction.

On May 19, the Turkish military stated that the helicopter “was hit probably by an unidentified missile fired from the ground by terrorists,” the term used for the PKK.

Though Ankara has not clearly pointed the finger at Russia for the attack, its lines of inquiry appear to lead in that direction. “Ankara is investigating to find out how the PKK came to obtain such a weapon,” said Sinan Ülgen, head of the Istanbul-based foreign-policy think-tank EDAM. “We don't know if it was directly delivered by Moscow or obtained some other way. But certainly it would make a big difference if it was delivered by Moscow. It would end any lingering hope of mending relations.”

Not waiting for the outcome of those inquiries, Turkish President Recep Tayyip Erdoğan on May 17 blamed the international community. “States which exercise control over the world’s arms industry give their weapons to terrorists. I challenge them to deny this,” he said at a meeting, local media reported. “By now, we all know which countries supply arms to which terror groups.”

Much of the Turkish media, which is under tacit presidential control, has been more direct, pointing out that the missile used was Russian-made or directly accusing Moscow.

But other Turks urge caution. “I personally would not think the Russians would do such a mad thing. It would not serve their interests,” argued Retired Brigadier General Haldun Solmaztürk, chairperson of the Ankara-based 21st Century Turkey Institute, a political think-tank. “It is possible to find Russian-made manpads anywhere in the world, especially in the Middle East. If it was supplied by Russia, then I would be very, very surprised.”

But the missile that downed the Turkish Super Cobra helicopter evaded all its defense systems, and, based on the video, appeared to be handled by someone well trained in its operation. “This is not an ordinary shoulder-fired missile,” claimed analyst Demir. “You have to train a normal soldier for weeks to use it. It is very sensitive, it is very high technology and well operated. Who trained the PKK, who made them so professional to be able to hit a helicopter so easily [the] first time?”

“This could be some Russian sources – official or not official – in retaliation by [the] Russians for [the] downing of [the] Turkish jet,” he speculated.

Russian President Vladimir Putin has not disguised his desire for payback for Turkey’s fatal November 2015 attack, but, so far, Moscow has limited its responses to economic sanctions and air violations of Turkey’s border with Syria.

The Kremlin has not commented about the helicopter downing. But pro-government Russian media have drawn conclusions, writing that the war in Turkey’s southeast is “gaining momentum” because Ankara “refuses to offer the southeastern … local Kurds the right to autonomy …”

Meanwhile, in Ankara, many wonder how many more missiles the PKK has. For the Turkish army, helicopter gunships, as in Russia’s campaign in Afghanistan, are key to its anti-insurgency efforts.

“In any operation, control of [the] air is extremely important,” advised Solmaztürk, a veteran of Ankara’s decade-long fight against Kurdish rebels during the 1990s. “If [an] attack helicopter will not be as forthcoming as in [the] past, it is very significant. In principle, [it] is a game changer.”

Rumors abound across Turkey’s predominantly Kurdish southeast that the PKK was preparing to use “new weapons.” The conflict erupted last July with nearly unprecedented brutality after two years of peace talks.

Throughout its roughly 30-some-year-long fight with the PKK, Ankara intermittently has accused Moscow of supporting the insurgency. But now its perception is that Russian President Vladimir Putin is determined to oust Erdoğan.

Ankara, according to a senior Turkish official, who requested anonymity, tried to reconcile with Moscow, but has been repeatedly spurned. In April, in a move interpreted as another gesture to Moscow, Turkish police detained a Syrian Turkmen, Alparslan Çelik, suspected by Moscow of killing one of the Russian pilots of November’s downed jet. But last week he was released after prosecutors declared they had no case against him.

Following the release, Moscow further tightened its Turkish trade sanctions. It has launched a complete ban against all vegetable and fruit imports from Turkey. But the tensions appear to go beyond trade.

Ankara has stepped up its expressions of support for the Crimean Tatars, a Turkic minority living on the Russian-occupied Ukrainian peninsula of Crimea. At the same time, noted  analyst Ülgen, “Turkey is looking to get NATO backing and expand its influence in the Black Sea, which is a big change in Turkish policy and is aimed at curtailing Russian influence.””

Other tactics are used, too. Erdoğan was quick to congratulate the Ukrainian winner of the Eurovision Song Contest, Jamala, for her song remembering the mass expulsion of Tatars from Crimea under Soviet leader Joseph Stalin in 1944.

A toughly worded statement from the Turkish foreign ministry for the 72nd anniversary of the Tatar expulsion on May 18 underlined that “[t]he wounds that this atrocity has opened are still fresh” for both the Crimean Tatars and Turkey, and emphasized Turkey’s support for its ethnic kin amidst the “illegal” Russian annexation of Crimea.

But how far Ankara will actually go with playing this card is unknown. Its public support for the Crimean Tatars often appears seasonal.

No doubt, Erdoğan will want to keep his Russian counterpart guessing. But the Turkish president is currently courting nationalist voters ahead of an expected referendum this fall to expand his powers. The Crimean Tatar topic plays well among nationalists.

But Moscow, too, is likely to continue keeping Ankara guessing about the Kurdish card. “We’ve certainly entered a new era,” warned analyst Ülgen. “The Turkish-Russian relationship has become much more confrontational.”