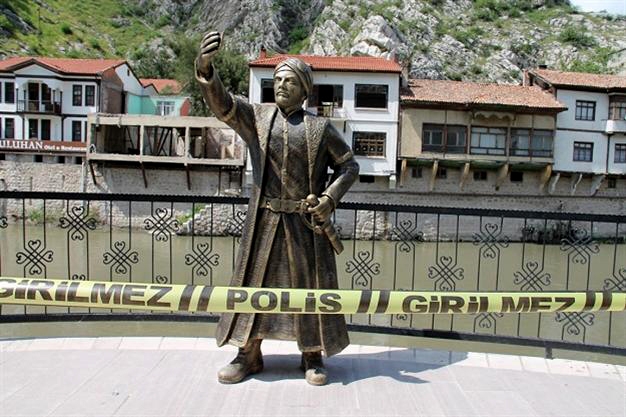 The selfie-taking statue of an Ottoman prince is cordoned off by police after it was vandalized the day after it was erected. (Photo: Amasya Police Department)

Turks’ growing fascination with the past, a phenomenon known as Ottomania, is taking a strange turn with the unveiling of a statue of an Ottoman prince taking a selfie in the Black Sea town of Amasya.

The statue, unveiled by the town’s municipality on May 9, depicts a turban-clad figure with one hand on the hilt of a sword and the other holding a smartphone aloft.

Photos of the statue – named Şehzade, a title given to Ottoman crown princes – surfaced online within minutes of its unveiling, generating huge interest, a steady stream of amused tourists and locals, and some detractors. Within days, its sword and phone had been snapped off by vandals, and it had been given its own police guard.

With Turkey’s once-denigrated imperial heritage now experiencing a revival of public interest, the Amasya statue’s unveiling has become the latest in a series of instances in which Ottoman culture was the object of ridicule, reverence and tension.

Amasya’s deputy mayor said Şehzade is intended to draw attention to the town’s heritage as a place to which the sultans would send their sons to live. “This was a subtle element of humor within art,” Osman Akbaş told EurasiaNet.org, commenting on the selfie pose.

“It is the same thing as [current] presidents and prime ministers taking selfies with young people, as they do a lot nowadays,” Akbaş continued. “If our şehzadeler were still alive today, they would be doing the same thing in the streets of Amasya.”

Akbaş vented his frustration with those in Turkish media who smirked at the statue: “They know nothing about our culture, but still dare to call us ignorant.”

He added that the municipality has filed a complaint so that police can investigate the vandalism, and investigate those who “celebrated the attack.” The furor mirrors that which erupted in February, when several candidates hoping to run for the governing Justice and Development Party (AKP) in June 7 parliamentary elections produced ads in which they wore period garb.

“It was a viral advertising campaign,” said Osman Yavuz, 47, whose unsuccessful bid to become an AKP candidate for the conservative Anatolian city of Konya included posters of himself dressed as a 13th-century Seljuk warrior. “I got very positive reactions from many people,” claimed Yavuz, who runs an advertising agency. “They were grateful to me for trying to symbolically revive our legacy. It is obvious people long for our glorious past.”

In front of a slogan reading “All Together, New Turkey,” Yavuz sported a börk, a piece of medieval headgear made newly familiar to Turks by the TV drama Ertuğrul, set in the early years of the Ottoman Empire.

Ottoman kitsch has become part of a broader campaign by Recep Tayyip Erdoğan, Turkey’s powerful and divisive president, to transform the country into the “New Turkey” referenced in Yavuz’s poster.

In January, a new presidential honorguard of 16 soldiers wearing period costumes denoting various Turkic historical eras created international headlines and was widely mocked by Erdoğan’s critics. “It is more about being powerful again,” commented Yavuz. “We want to become powerful like we were during the Ottoman and Seljuk eras. It is more about that, rather than bringing old customs back.”

Traditional attire was not always held in such esteem. The founder of the Turkish republic, Mustafa Kemal Atatürk, launched a campaign to eradicate traditional clothing as part of a Westernization drive. This included a ban on the fez, which had hitherto been the empire’s headgear of choice for men. In 1927, Atatürk said that it had “sat on the heads of our nation as a symbol of ignorance, negligence, fanaticism, and hatred of progress and civilization”.

In the past decade, those attitudes have changed, driven both by the AKP’s nostalgia for all things Ottoman, and by a series of popular soap operas and movies. Chief among them was Mühteşem Yüzyıl, “Magnificent Century,” which chronicled the reign of Sultan Süleyman the Magnificent. The program enthralled Turkish viewers from 2011-2014.

The show single-handedly popularized Ottoman-style women’s clothing at traditional bachelorette parties called kına gecesiler, “henna nights.” Mine Ertuğrul, 27, who runs an Istanbul-based company that makes dresses for such gatherings and weddings, was among the first to kick off the trend.

The idea came to Ertuğrul, a business administration graduate with an interest in Ottoman culture, after she married around the time the Mühteşem Yüzyıl craze took hold. Working with a tailor, in 2011 she created a prototype dress similar to one worn by Hürrem, Süleyman’s favorite concubine, and advertised it on social media.

“It is not actual authentic Ottoman clothing,” Ertuğrul acknowledged of her Mühteşem Yüzyıl-inspired designs. “It is a synthesis of modern evening gowns, an idea of traditional clothing, and a popular conception of beauty.”

A representative of another company, Seyranlı, stated that 40 percent of the 40,000 kına gecesi dresses it sold last year were modeled on Mühteşem Yüzyıl.

Not all Ottoman apparel can be so easily modernized. The fez is now allowed in official wedding photos; but no one interviewed expected it to make a sartorial comeback. “I do not think it will happen,” said İsmail Karahalil, an Istanbul fez maker who makes around 50,000 of the hats a year, almost exclusively for sale in the city’s touristic bazaars.

As the selfie-taking Şehzade illustrates, Turks are increasingly looking at how to integrate bygone traditions with modern ways – and often having fun doing so. “People do not want actual traditional culture to come back, but they do not want to be totally Western either,” explained clothier Ertuğrul. “We want to achieve our own values and culture and feel confident in them.”