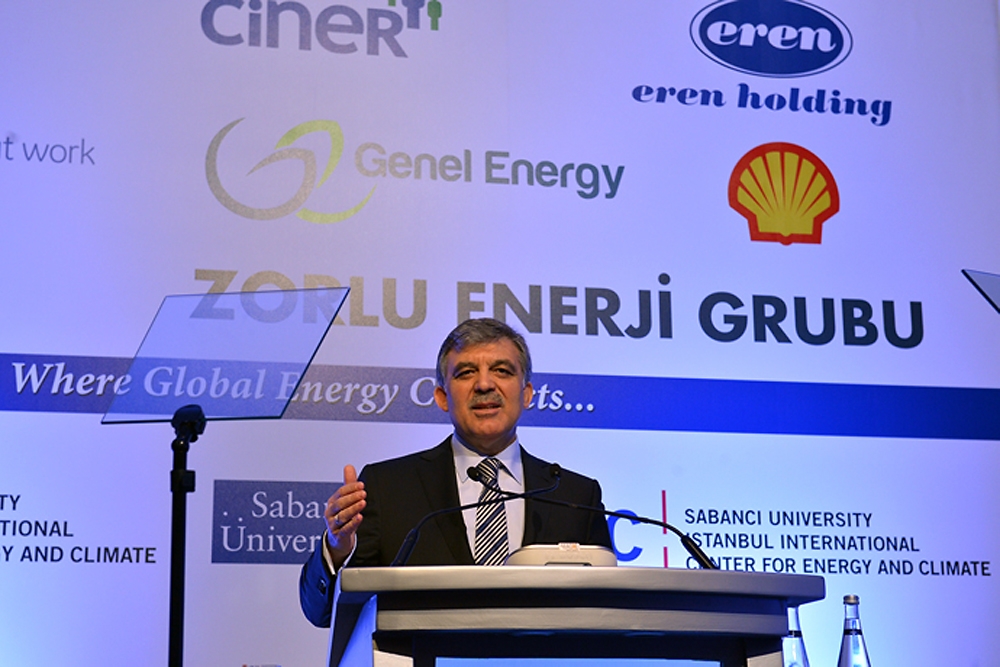 Turkish President Abdullah Gül addresses the 4th International Energy Forum in Istanbul in early May 2013, when he emphasized his country’s future as “an important hub in transferring and marketing” natural gas and oil from east to west. With the unrest in Ukraine, Turkey is looking to add energy resources from the Kurdish controlled region of northern Iraq into its mix of supplying Central and Western Europe. (Photo: Turkish Presidential Press Service)

With Ukraine and the Middle East currently engulfed in turmoil, Turkey is trying to play a new energy-export card and, in the process, strengthen its position as a regional energy hub.

The Turkish government has always sought to exploit Turkey’s geographic position between the energy-rich countries of the Caspian Sea region and Middle East, and those of energy-hungry Europe. But a combination of prohibitive costs and Kremlin lobbying has kept the European Union firmly dependent on Russian oil and gas.

Now, the deepening crisis in Ukraine, a key transit state for Russian energy, is providing an incentive for the development of a new export option, namely tapping into reserves located in Kurdish-controlled areas of Iraq, an area that borders southeastern Turkey. “One way to effectively discipline Russia is to create an alternative to the Gazprom monopoly on most of Europe’s gas services,” pointed out Atilla Yeşilada, an analyst for Global Source Partners, a risk-assessment group for emerging markets, including Russia, Turkey and Ukraine. “And that could lead to the accelerating of the building of the Iraqi Kurdish pipelines to Turkey.”

While Europe has not publicly expressed an interest in Kurdish energy, Turkey, which receives most of its gas supplies from Russia, including via Ukraine, emphatically has. Not too long ago, Ankara viewed the semi-autonomous Kurdish regional government with suspicion, bordering on outright hostility; Turkish leaders feared the region’s dreams of independence would only add to the restiveness of Turkey’s own Kurdish minority.

Now, however, it is firm handshakes and warm embraces. Iraqi Kurdistan provides the bulk of the business that has turned Iraq into Turkey’s second-largest trading partner after the EU. A joint, 50-year energy partnership announced in June with the Iraqi Kurdish government underlined the depth of these ties.

Iraqi Kurdistan is believed to contain vast oil and gas fields. But it is the oil-rich city of Kirkuk, seized in June by Kurdish forces, which could alter the equation in terms of Turkey’s potential ability to act as a middleman for non-Russian energy exports to Europe.

“Without Kirkuk, the numbers aren’t significant enough, but with Kirkuk they are,” claimed political columnist Aslı Aydıntaşbaş of the Turkish daily newspaper Milliyet. Kirkuk produces around half a million barrels of oil a day. The Kurdish regional government is now working hard to link up Kirkuk’s energy reserves to its pipeline running to Turkey.

With support from the United States and Europe, Baghdad has warned both the Kurdish regional government and Ankara of legal trouble, if they move to sell energy without Iraqi central government permission. But as the Iraqi government struggles for survival against Sunni extremists, its ability to enforce its will appears increasingly questionable.

The threat does not appear to concern Ankara, which has agreed to sell Iraqi Kurdish oil without Baghdad’s consent. A Turkish energy-industry source, who requested anonymity, alleged to EurasiaNet.org that the Kurdish regional government received $100 million through Turkey’s state-owned Halkbank for the May sale of Iraqi Kurdish oil to an Israeli buyer.

A further three tankers carrying Iraqi Kurdish oil are reportedly looking for buyers at present as well. Whether that oil can eventually be sold will be key to the aspirations of selling Iraqi Kurdish oil in what are called “forward sales,” which sell a year’s production in advance, noted the Turkish energy-industry insider.

“This is of strategic importance for Ankara,” observed Turkey analyst Sinan Ülgen of Carnegie Europe in Brussels. “If it succeeds, it will be one of [the] most sought-after successes of Turkish foreign policy.”

Powerful forces are striving to align themselves against Turkey and the Iraqi Kurds. “Russia is an energy superpower. From its perspective, an alternative supplier is a rival to Russia, so Russia would not like alternative gas and oil in the market,” underlined energy watcher Emre İşeri, an assistant professor of economics at Izmir’s Yasar University.

One tactic might be for Russia itself to try and grab a piece of the action. Citing unnamed “trading sources,” Reuters reported this June that the state-owned Rosneft allegedly purchased Kurdish crude for use in a German refinery it co-owns with BP. Rosneft does not appear to have responded to the report.

In blocking a Turkish-Kurdish energy linkup, Russia also could look to its regional chum, Iran, which has closed its border to energy shipments from Iraqi Kurdistan and threatened to block all trade.

Ironically, “[t]he United States, Iran and Russia share [the] same policy towards Iraq,” commented İşeri. “They don’t want to see a disintegrated Iraq and are concerned that Turkey’s closer ties with Iraqi Kurds on energy will lead to Iraq’s breakup.”

Ankara could hold a potential trump card in its hand, one energy publication claims. While not eager for Kurdish energy supplies, the United States is eager for Turkey to approve shipments of liquid natural gas to Ukraine via the Bosporus, noted James Stafford, editor of OilPrice.com, on June 13. Eventually, that desire might impact Washington’s stance on Turkey’s Kurdish-energy partnership, he suggested.

Ankara is still courting Moscow, however. Earlier this month, the Turkish Ministry of the Environment gave the green light to the construction of Russia’s South Stream gas pipeline, which will run through Turkish waters in the Black Sea to Bulgaria and on to the wider European market. The message, say observers, is clear. In its ambition to become a regional energy hub, “Turkey will go for energy cooperation wherever it can find it,” claimed Semih Idiz, diplomatic columnist for the Turkish newspaper Taraf.