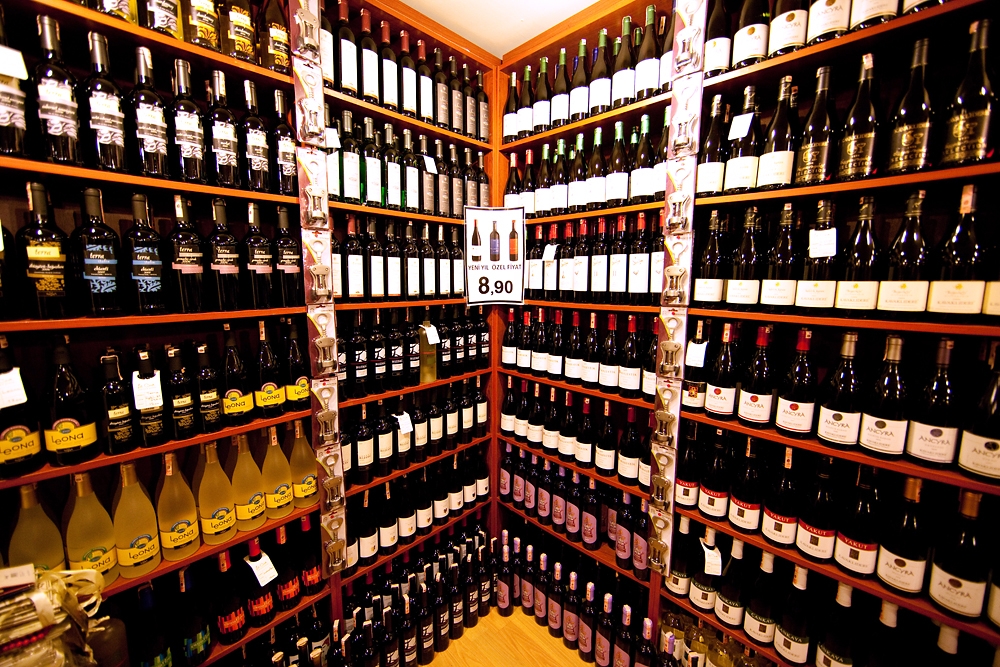 New tax hikes on alcohol and new rules for times of selling alcoholic products in Turkey are threatening the future of local tekels, or liquor stores, according to several store owners. The prohibition on when to sell alcohol does not affect bars, restaurants, or clubs. (Photo: Jonathan Lewis)

After a fruitless haggle over a bottle of whisky, Cevdet Yavuz reflects glumly on his prospects as another customer slips through his fingers and walks out the door.

“I offered him that bottle for 130 lira ($75),” said Yavuz, 42, who runs a tekel, or liquor store, in Istanbul’s Kadıköy District. “I am selling things at the price I bought them because I have no money to replace my stock.”

Turkey’s alcohol retailers and drinkers have long grumbled about tax hikes that have sent the cost of alcohol skyrocketing in recent years. New legislation is being viewed by some people as a quantum step toward making Turkey dry.

One provision that went in effect on September 9 has left thousands of tekel owners despairing about their ability to stay in business. Retailers are now prohibited from selling alcohol between 10 pm and 6 am. The ban does not affect bars, restaurants, or clubs. “I used to do most of my trade after 10 pm,” complained Yavuz. “Now I can barely pay my rent. … In a year, there will be no tekels in Kadıköy.”

Other provisions in the law – adopted in May by parliament, which is controlled by the governing, Islamist-rooted Justice and Development Party – are set for implementation in 2014. The regulations are the most comprehensive curbs ever imposed on alcohol in the Turkish republic’s history.

They include a ban on all forms of advertising and promotion, which will come into force next June. Shops and restaurants will have to remove alcohol-branded signs, glasses, and refrigerators. Alcohol in shops must be hidden from visibility both inside and outside the premises.

Alcoholic beverages will carry cigarette-style health warnings. Images of alcohol consumption will be banned on television and in movie theaters – booze will be pixelated or censored on screen in the way cigarettes currently are. No new licenses to serve or sell alcohol will be issued within 100 meters of mosques or educational establishments, although existing licenses will remain valid.

In a country riven by a bitter debate over the role of Islam in public life, the law has prompted fresh accusations that the government is seeking to remold Turkey along conservative Islamic lines. The restrictions were among the grievances cited by protesters during the anti-government demonstrations that gripped the country earlier this summer.

Prime Minister Recep Tayyip Erdoğan recently denied that his government, via the adoption of the law, is meddling in personal choices. Rather, he claimed, the law is intended to protect public health. “Those who claim we intervene in people’s lifestyles should look at the regulations in the United States, in the West,” Erdoğan said at a commercial fair in Istanbul on September 12.

His critics point to Turkey’s low alcohol consumption in comparison to countries where similar restrictions exist. According to a 2011 survey of 16,500 families by the Turkish Statistical Institute, 83 percent of Turks never drink.

“There is no problem with alcoholism like in European and other countries,” said Cengiz Aktar, a political scientist at Istanbul’s Bahçeşehir University. “This gives us a clear picture of the government’s intentions. They have their own social ethics, which happen to be Islamic, and they want to impose them on the population.”

The consensus among tekel owners in Kadıköy is different. “The only purpose of this law is to kill small businesses,” asserted one liquor-store manager, echoing the sentiment of several others who spoke to EurasiaNet.org.

They claim the law benefits supermarket chains, which have always closed at 10 pm. “Now people are going there to buy their alcohol at the supermarket at the same time they do all their groceries,” said liquor-store owner Yavuz.

Another tekel manager said his store’s income has dropped by half since the new regulations went into force. One employee, he added, already has been laid off. The manager said he has received two official warnings telling him to close the shop by 10 pm even if it is not selling alcohol.

Yavuz’s tekel is in an area of Kadikoy where a similar ban was introduced five months ago after complaints about late-night, public drunkenness. He now closes at 10 pm.

To support his failing business, he is already transferring funds from a tea shop he runs, and is thinking of shutting down within a month if trade does not improve. He faces costs of 8,000 lira ($4,000) to redesign his shop, change the signage and conceal the alcohol in line with the upcoming ban on promotion, and fears that the measures will only damage his business further.

Bendevi Palandöken, president of the Confederation of Turkish Tradesmen and Craftsmen, which represents alcohol retailers, said he does not expect the law to put traders out of business, but it will make a big dent in profits. “They will continue to trade. However, their sales and income may decrease,” Palandöken predicted.

He warned that the new law could spark illegal sales, as well as false accusations of illegal sales by members of the public opposed to alcohol vendors.

One Kadıköy tekel owner, who spoke on condition of anonymity, admitted he was already secretly selling alcohol after 10 pm. “This is the only income we have, so we feel we have to do it,” he said, adding that it was also a point of principle. “[Erdoğan] is trying to restrict our freedom, and we will not put up with it any longer.”

Today’s Zaman blogger Şule Kulu, a non-drinker who supports the law, believes that the government’s aggressive push for the new regulations largely has hindered public discussion about the changes. "We have not even been able to discuss the content of the law and to what extent it would be successful in protecting public health.”

With the issue becoming increasingly symbolic, the curbs are unlikely to encourage those Turks who already drink to give up, said Aktar, the political scientist. “This kind of prohibition has only one utility: It puts more fuel on the fire of polarization in this country.”