Turkey: Tea farming to be privatized? 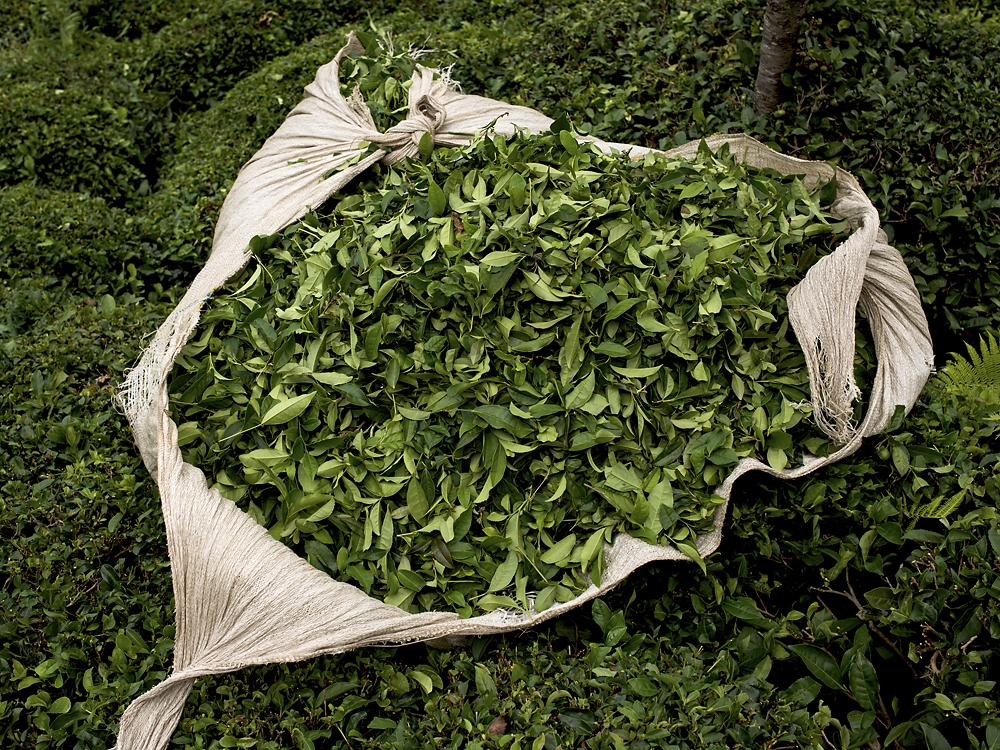 Freshly-picked tea leaves are gathered in a sack at a tea plantation near Bahattinpaşa, a village in Rize. 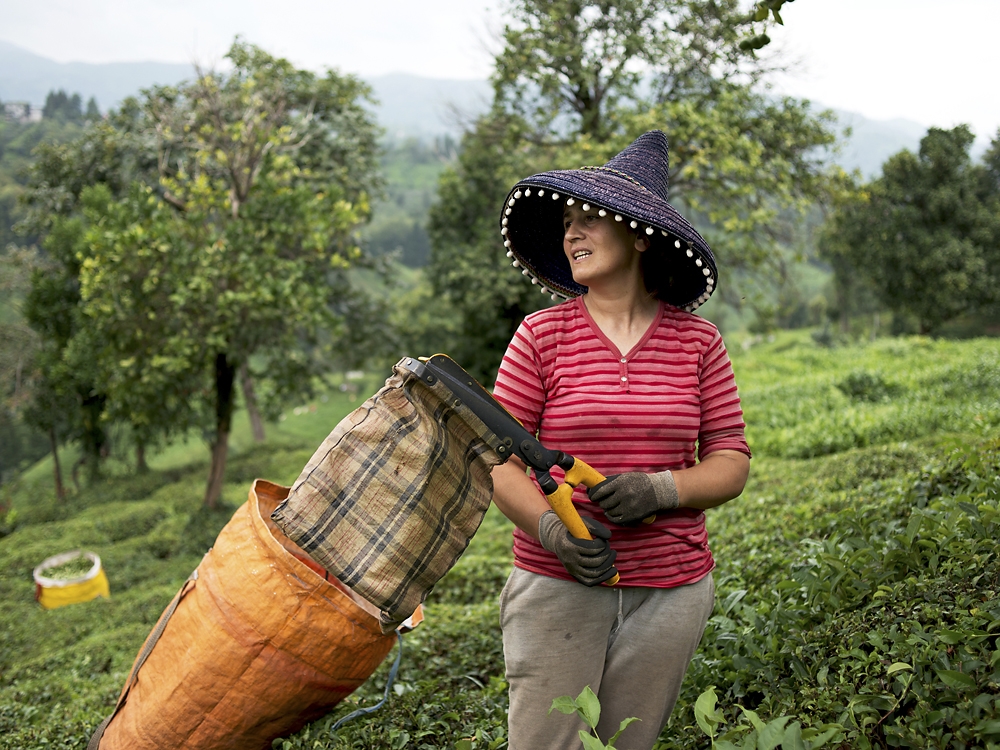 A woman harvests tea on a plantation near the town of Ardeşen. 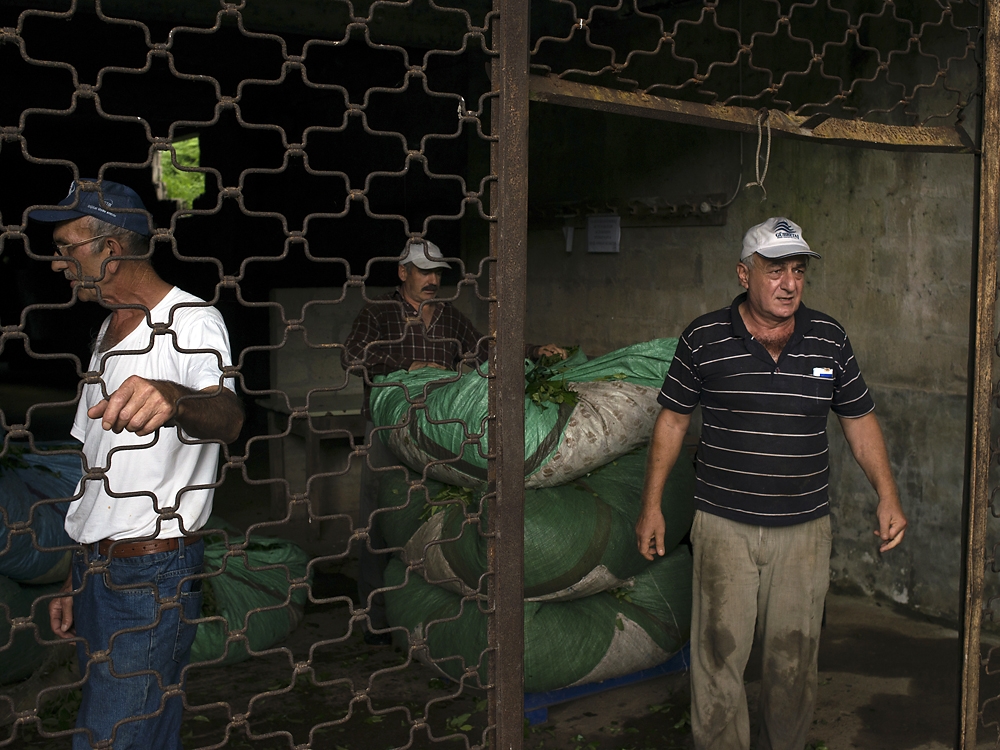 Stuffed sacks of tea leaves are weighed at a warehouse in the village of Bahattinpaşa. 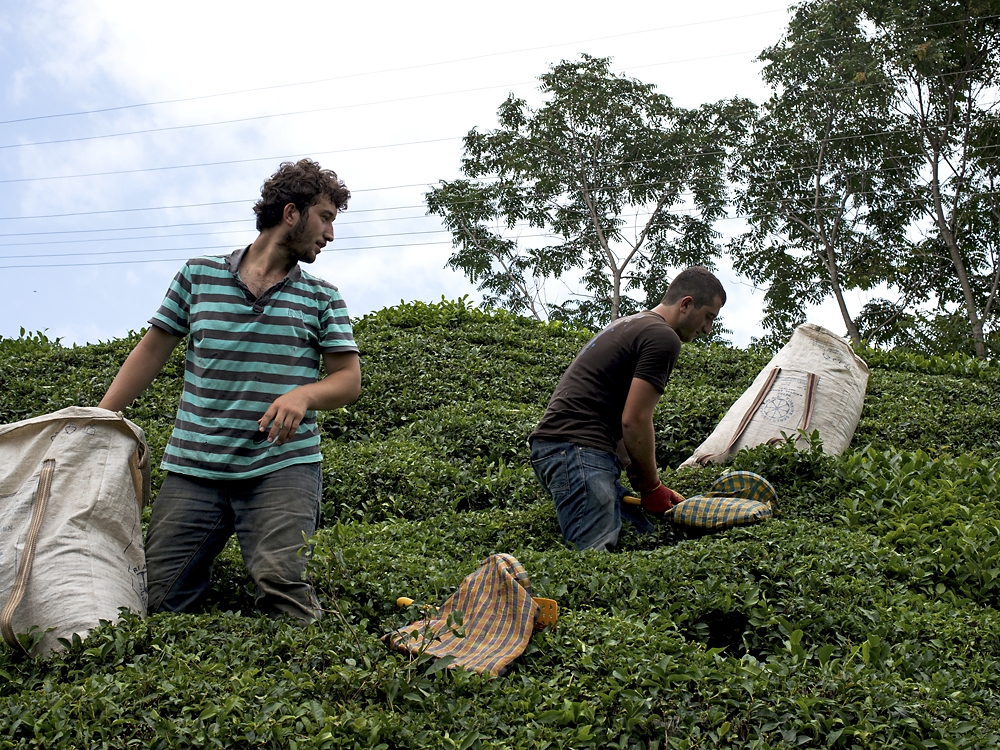 Young men pick tea with their families during the short harvest season in August. 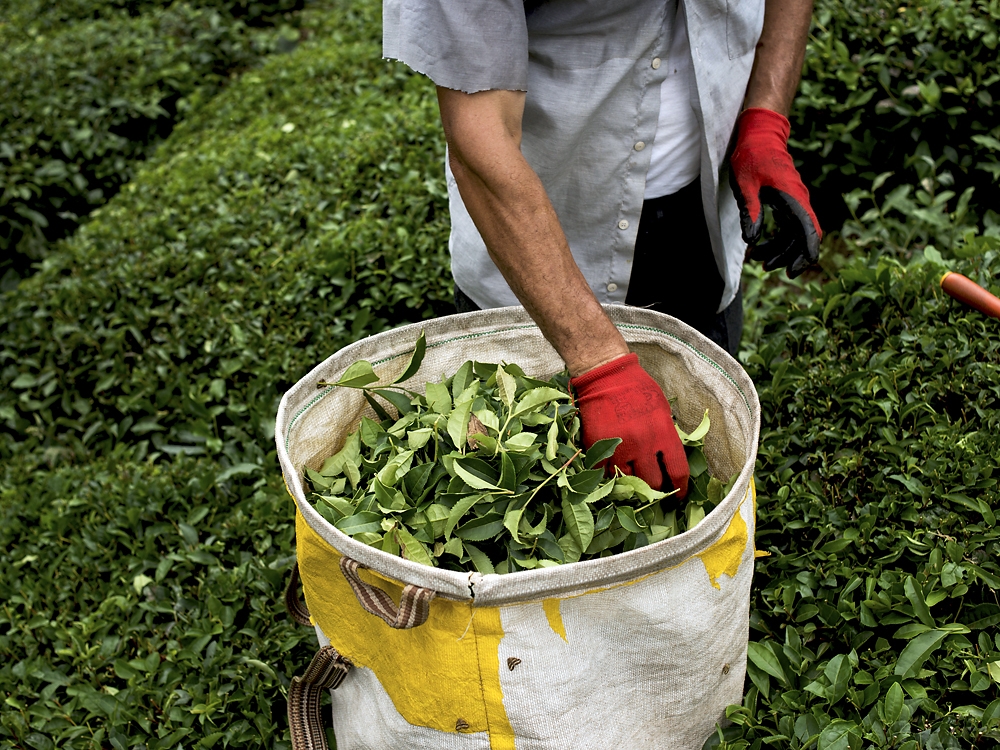 A worker checks the quality of the freshly picked leaves. 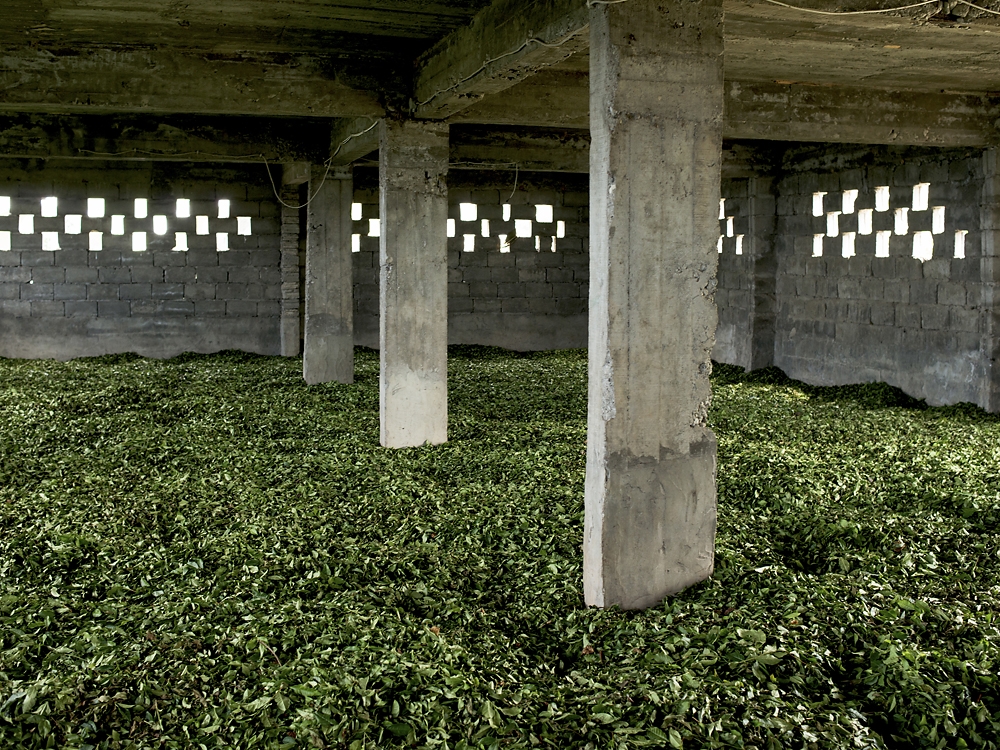 Green tea leaves begin to fill a warehouse before being sold to one of the main companies in the region. 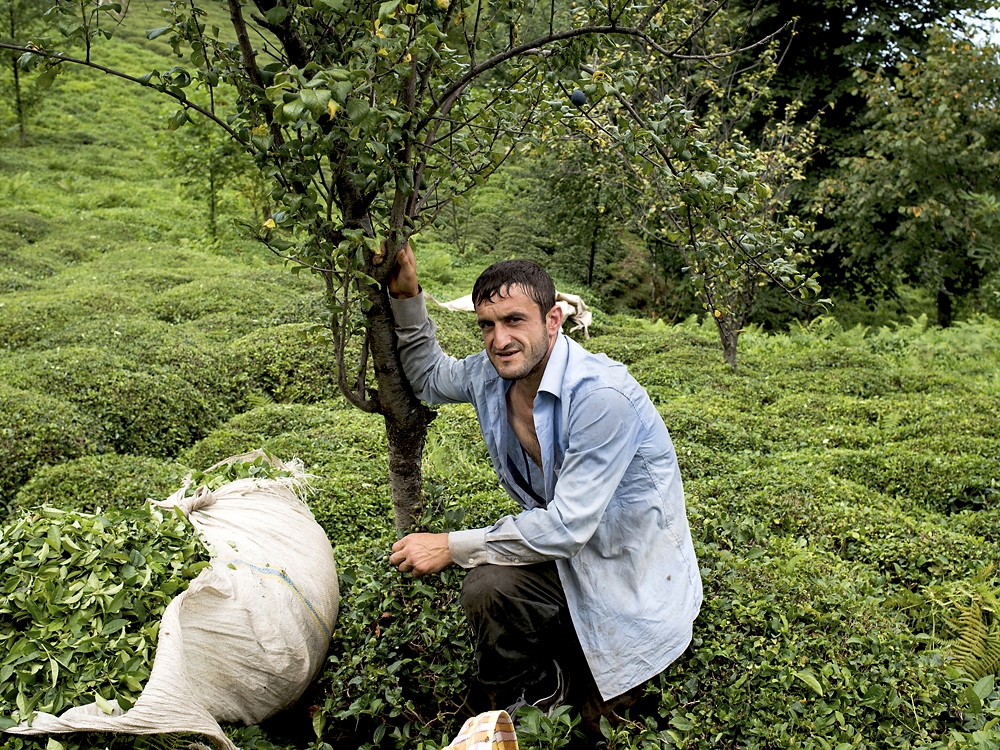 A Georgian tea farmer from Batumi works in a tea plantation of Rize for two months during each harvest season. 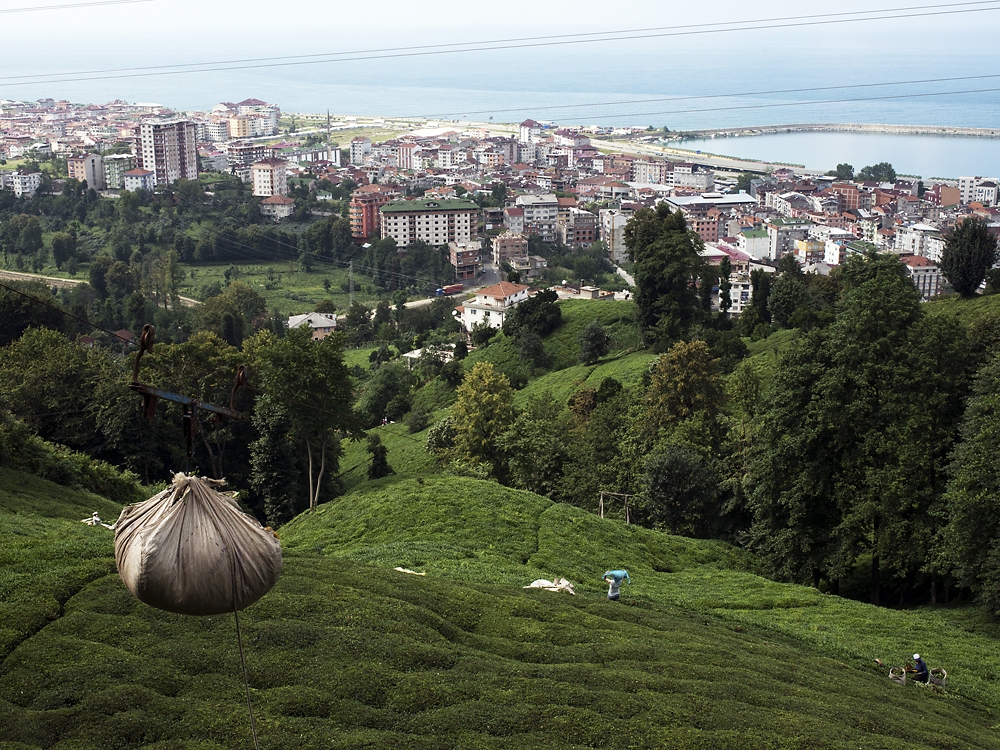 Full bags of tea leaves are hauled uphill by cables for delivery to a warehouse. 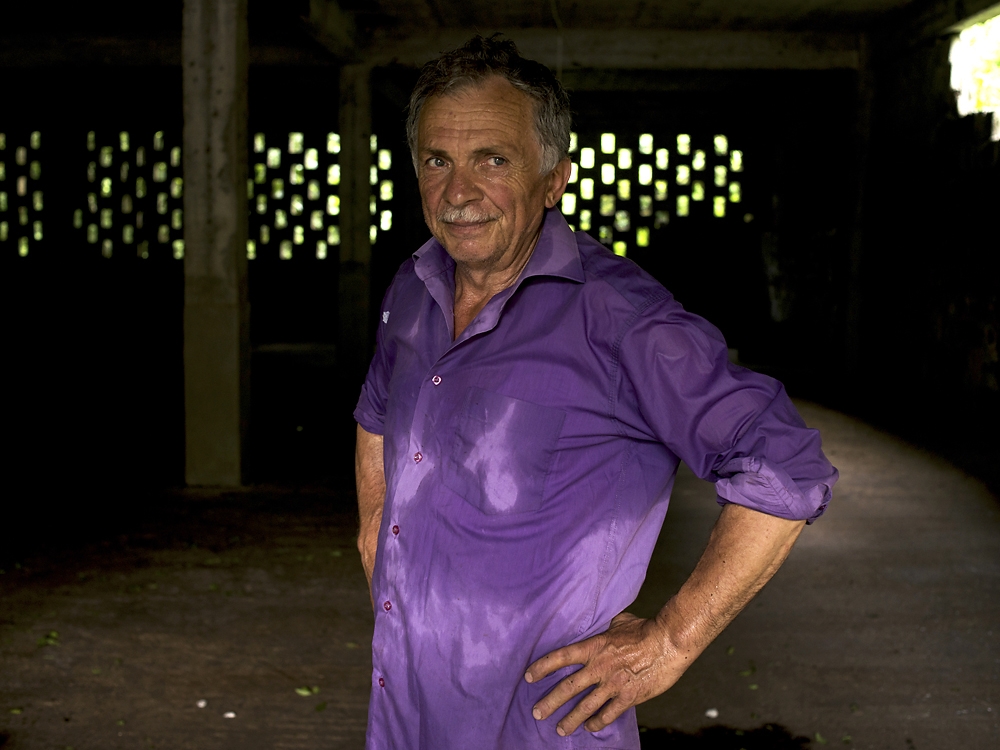 A sweaty tea farmer takes a break in the shade of a warehouse. 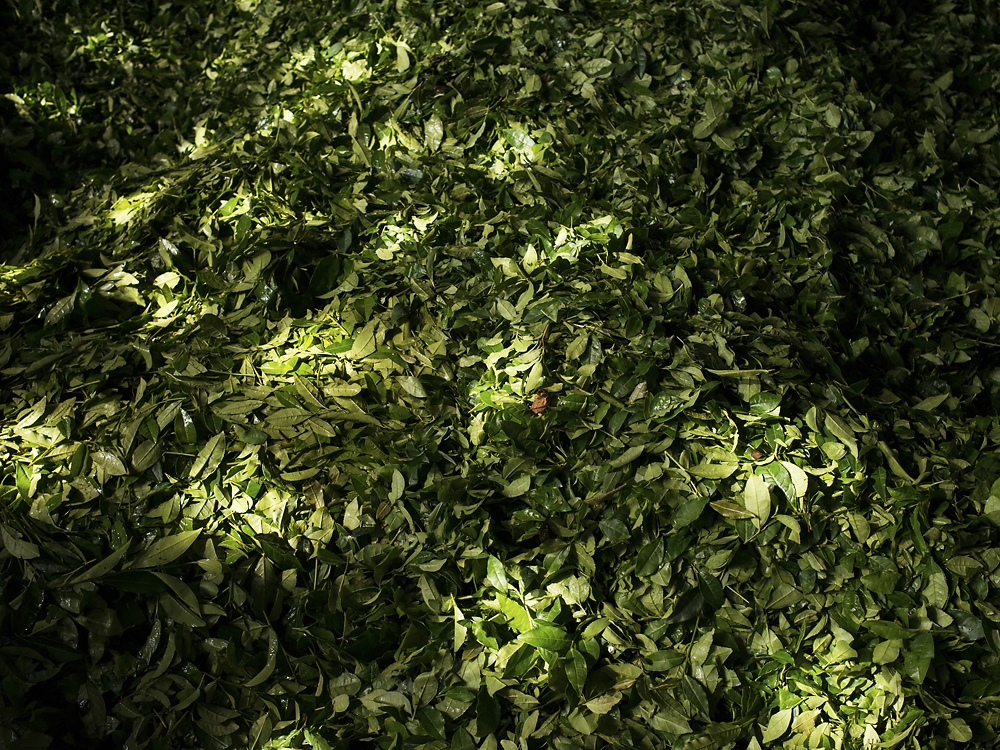 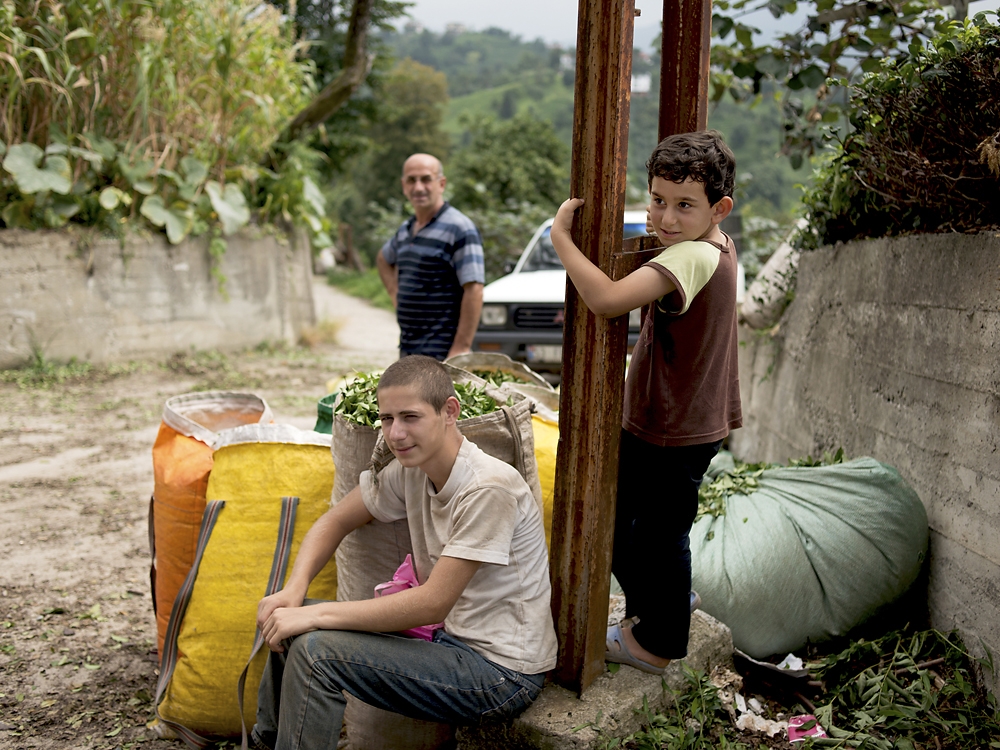 Kids take a break after helping their parents pick tea at a plantation near Ardeşen. 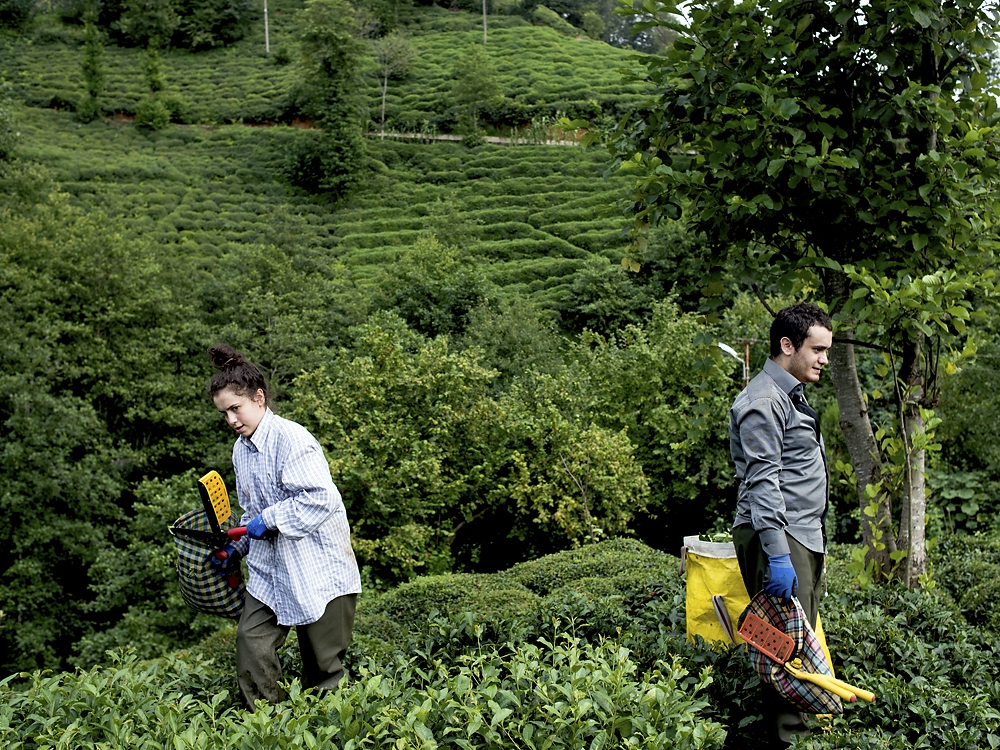 A brother and sister work together cutting and picking tea leaves. 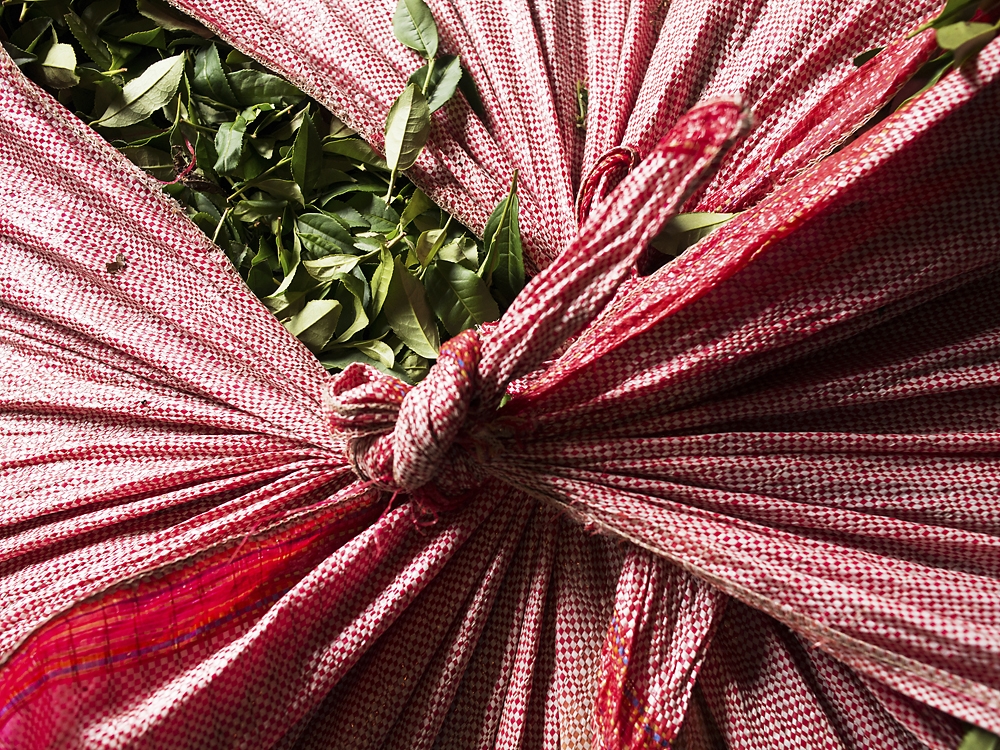 There are 380 private and 35 state-owned tea factories in the eastern Black Sea province of Rize. 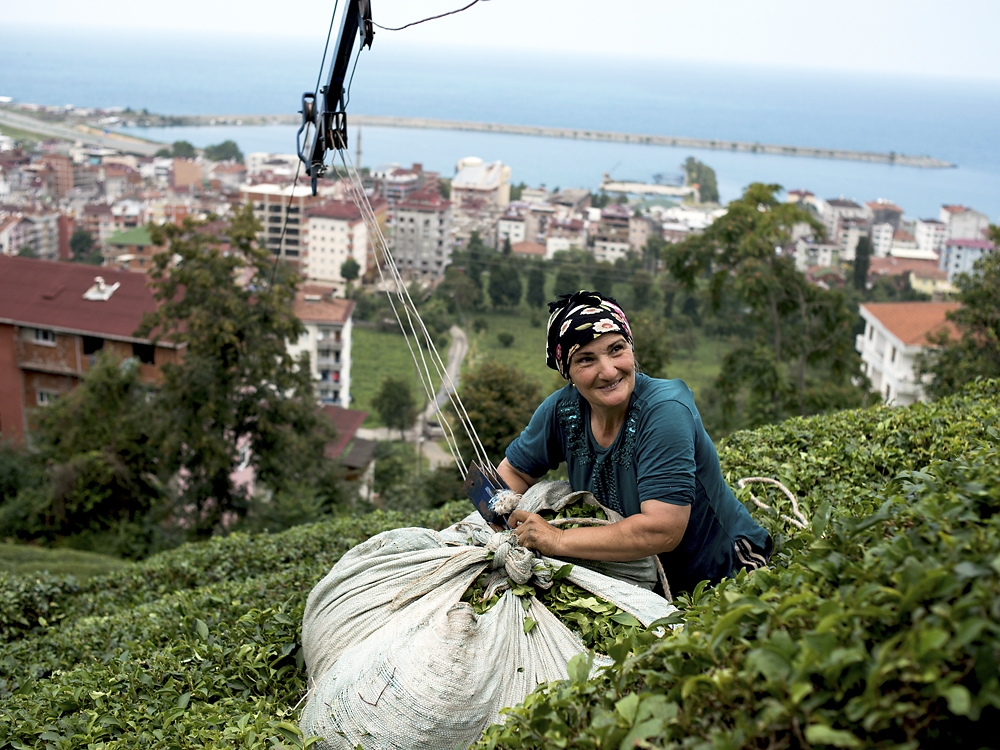 A woman ties up a full bag of tea leaves for delivery to the top of the hill. 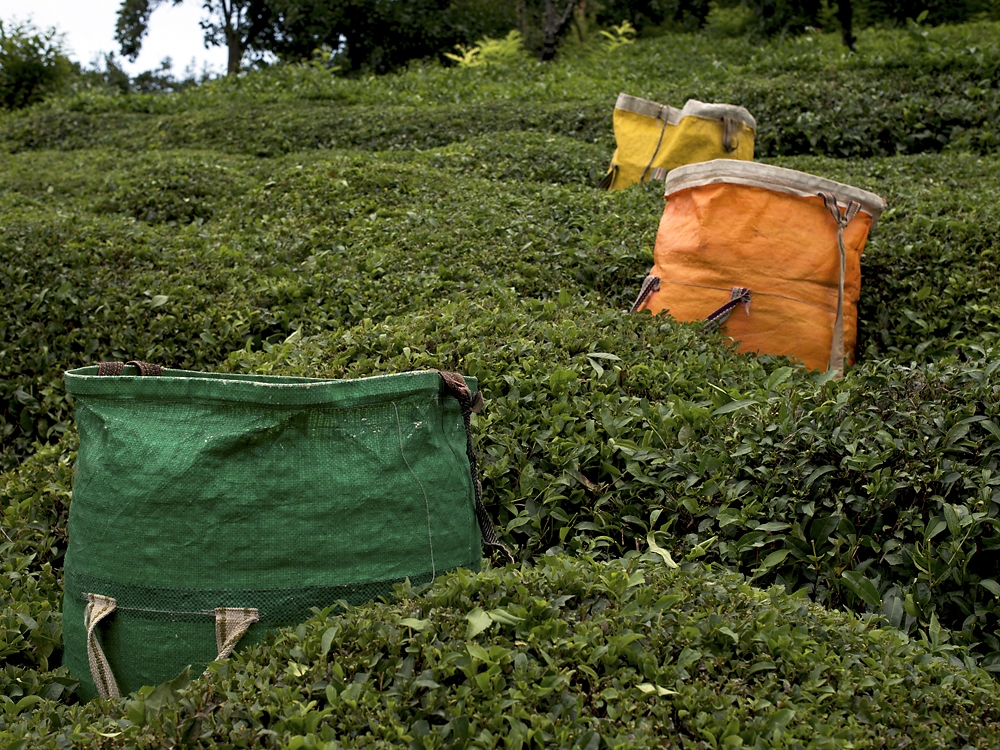 Full bags of fresh tea leaves wait to be gathered for delivery to a warehouse. 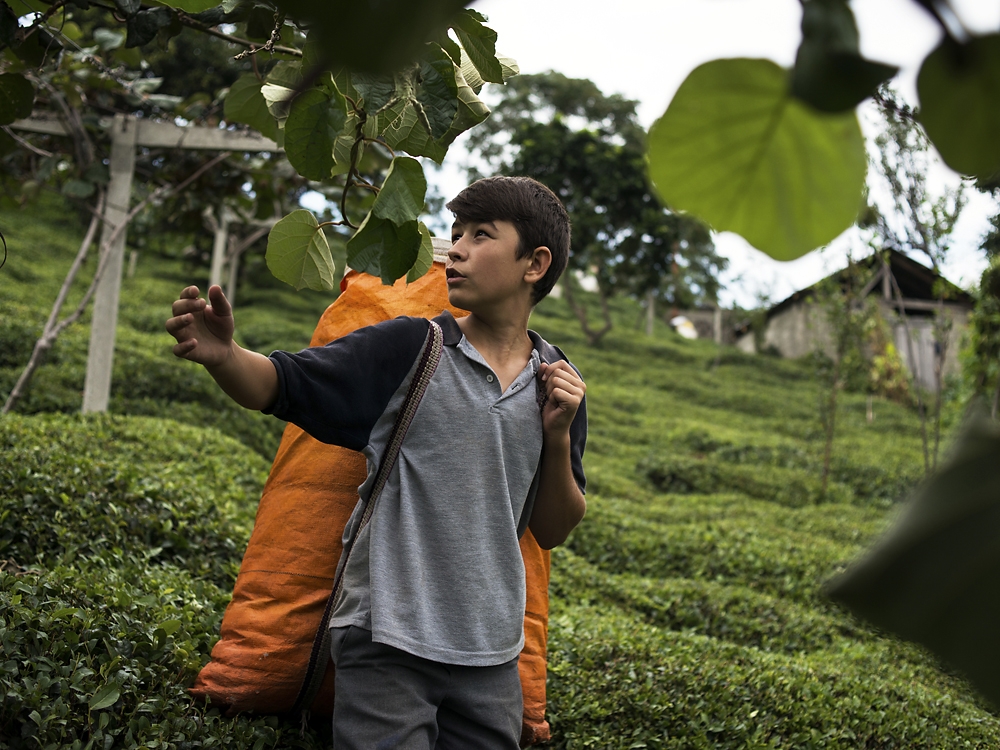 Tea farming is a career job that often is passed down from one generation to the next. 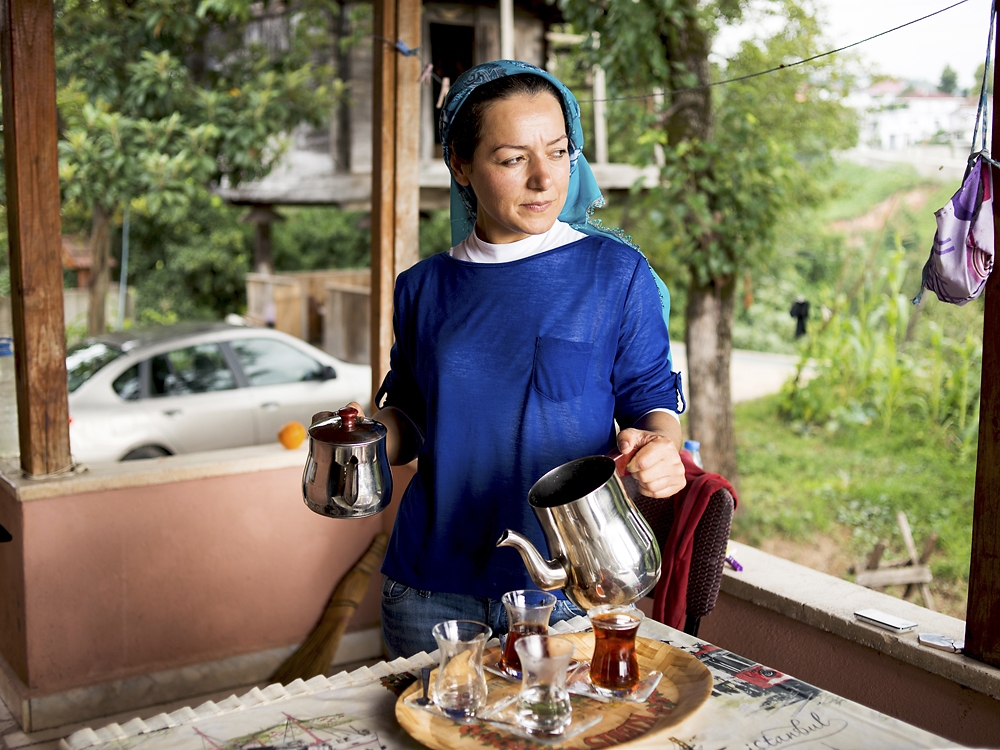 Turkish tea farming was for decades a government-supported endeavor. Now, the private sector is moving in, as free-market policies instituted by Turkey's governing Justice and Development Party (AKP) reshape this key industry.

In Ardeşen, a town in the eastern Black Sea province of Rize, 49-year-old Idris Okumuş hauled sacks of tea leaves into a waiting truck on a recent late summer day. With the help of his wife and daughter, he worked from morning to evening during the harvest cutting tea leaves from the bushes by hand and placing them in sacks. There are few alternatives to growing tea in Rize. "Because I live in this town and so I have to," Okumuş said when asked why he toiled in such a labor-intensive line of work.

While some growers work only during the harvest, Okumuş is also a low-level manager for Çaykur, Turkey's state-owned tea company. Every year, he sells Çaykur tea from the three main harvests, which each last about 15 days. Yet, because of Çaykur's strict limits on the amount it buys per harvest, Okumuş can sell his leftover tea to private tea companies around Rize.

The practice is frowned upon by some growers, who considered the private companies a threat. Turkish economic consultant Emre Deliveli said state companies have traditionally served an important social function, promoting cohesiveness in the towns and cities in which companies are based. Under the AKP, the privatization of state assets has increased and tea growers openly voice concern that Çaykur might soon be privatized in order to generate revenue for the government.

The Lipton tea company has expanded its presence in Rize of late and far from all growers are happy about it. Grumbling could be heard at a cement-walled Çaykur collection point in Bahattinpaşa, a village in Rize, where tea growers drop off their day's haul.

"Today Çaykur is powerful, but in the future it will be private," said 45-year-old grower Muammer Bursali. "In the end we will see Çaykur go to Lipton."

Another grower, Mehmet Vardar, 65, interrupted and accused Bursali of opposing the AKP. Çaykur will not be privatized, he said. "[Prime Minister Recep] Tayyip Erdogan is from Rize, so privatization will not occur," Vardar said.

"We don't like the private sector," Vardar added. "When the state factories become privatized America will get more money."

Tea growers in Rize prefer selling their tea to Çaykur because of the company's fixed price per kilogram. The price varies every year, but in 2013, it was 1.35 lira (about 66 cents) per kilo. Private companies are known to buy tea at a lower rate.

"There's never a fixed rate, it depends on the tea's condition," said Ramazan Kosanoğlu, a tea grower in Rize. "Private companies don't always give your money on time. There are people waiting for money for three years. Çaykur is the most reliable factory."

"The state pays better, they pay more," chimed in Hakan Günaydin, 25, another tea grower in Rize.

Not far from Bahattinpaşa, Yusuf Yurtvermez, board chairman of private tea company Nurçay, paints a far different picture. He lauds the AKP's support of private companies. "The AKP supports private factories more than other governments in the past," he said. "If AKP did not exist, today these factories would not be here."

Yurtvermez claimed that in some cases the government covers about up to 60 percent of start-up costs for private companies in the area if they use locally produced machinery.

Deliveli, the consultant, pointed out that the AKP was popular with small-to-medium-sized businesses such as Nurçay that have proliferated across Turkey. He said that some of these companies don't pay taxes or social security on all employees in order to make greater profits. But the AKP has not taken significant steps against the grey economy, keeping themselves popular with the businessmen, even at the expense of workers' rights. "They wouldn't want to anger their voter base," Deliveli said.

Still, Nurçay employs 130 workers, selling its tea to Lipton. In comparison to many of the growers reliant on Çaykur, most Nurçay employees work year round and harvest apples, corn, and kiwis when they weren't focused on tea.

With 380 private and 35 state-owned tea factories in Rize, Yurtvermez admits the competition is tough, but claims business is proceeding well.

Oğuzhan Kurtoğlu, a manager at a Lipton tea collection point that shares space with Çaykur, doesn't have a lot of time for debating the merits of public verses private companies. When pressed he said Lipton offered 600,000 lira ($292,000) in health insurance if he was injured while working in the tea fields, though he was only a seasonal worker. He also said the tea Lipton produced was a higher quality than Çaykur, who he worked for in the past. "Those are the only things Lipton is better at than Çaykur, not others," he said.

Kurtoğlu was more concerned about a mysterious insect that was eating the tea leaves and rising temperatures that could spell disaster for tea growers.

An end to tea growing "would kill the life here," he said.