Turkey: The Protest Is Over, Says PM 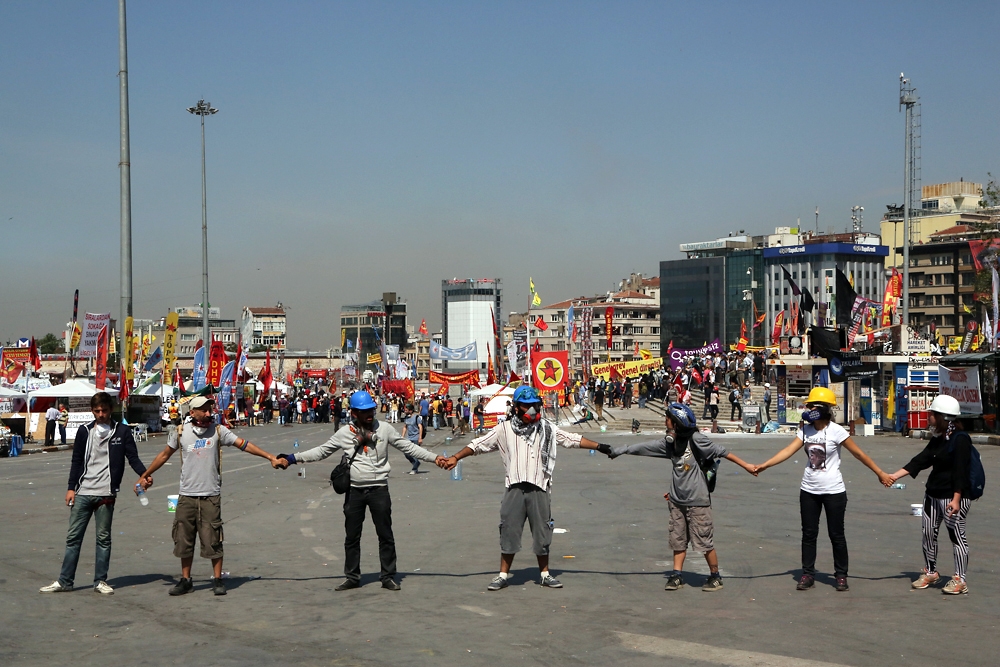 By late morning protesters form the start of a human chain around Taksim Square in Istanbul. 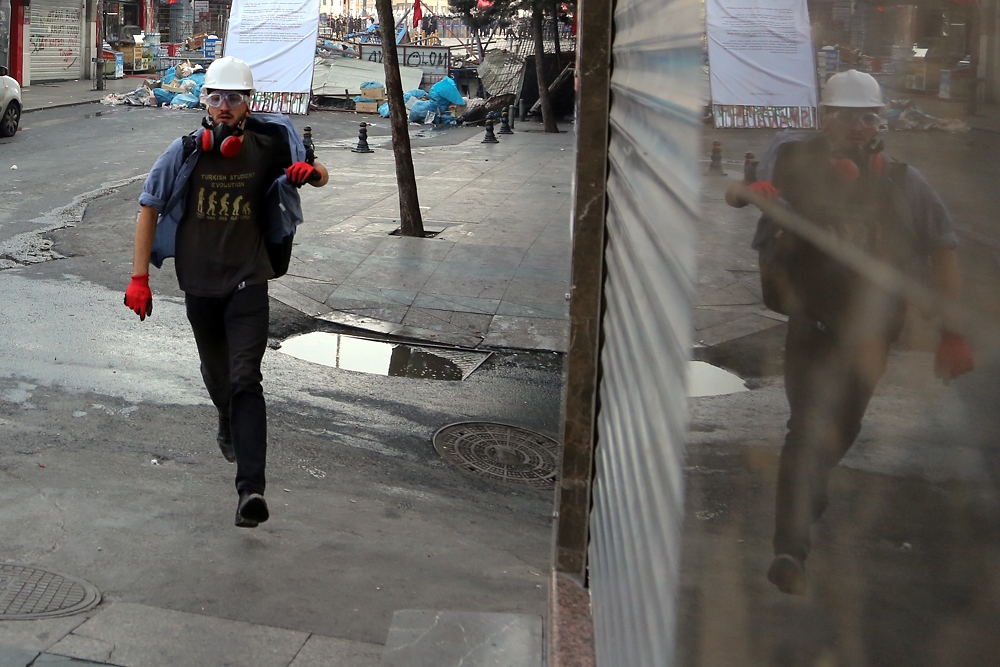 A protestor sprints away from a barricade as riot police approach. 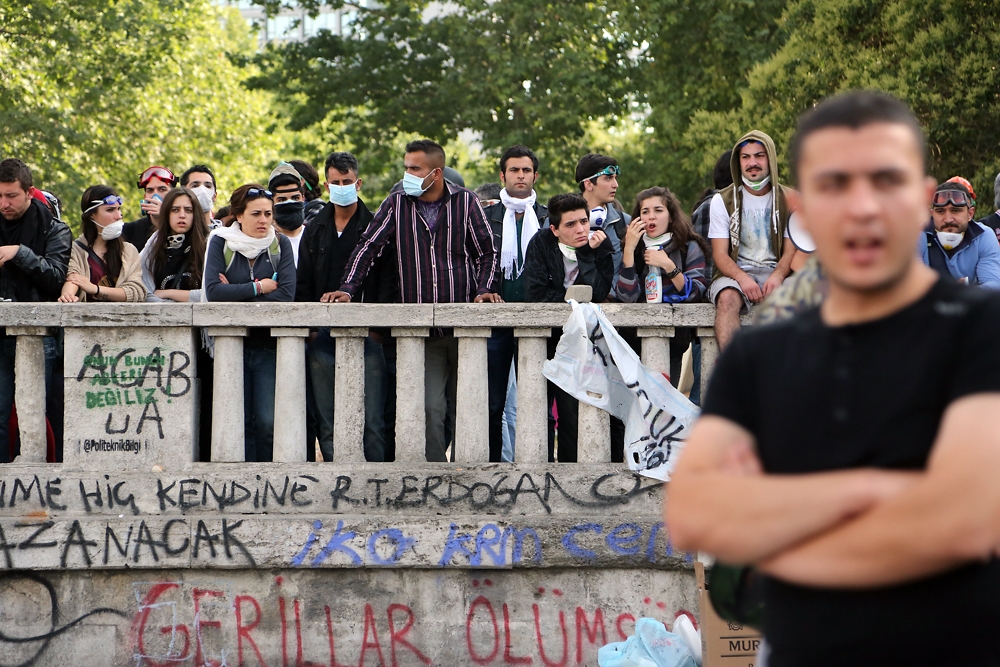 Inside Gezi Park, protesters watch the stand-off between other protesters in Taksim Square and police just 50 meters away. 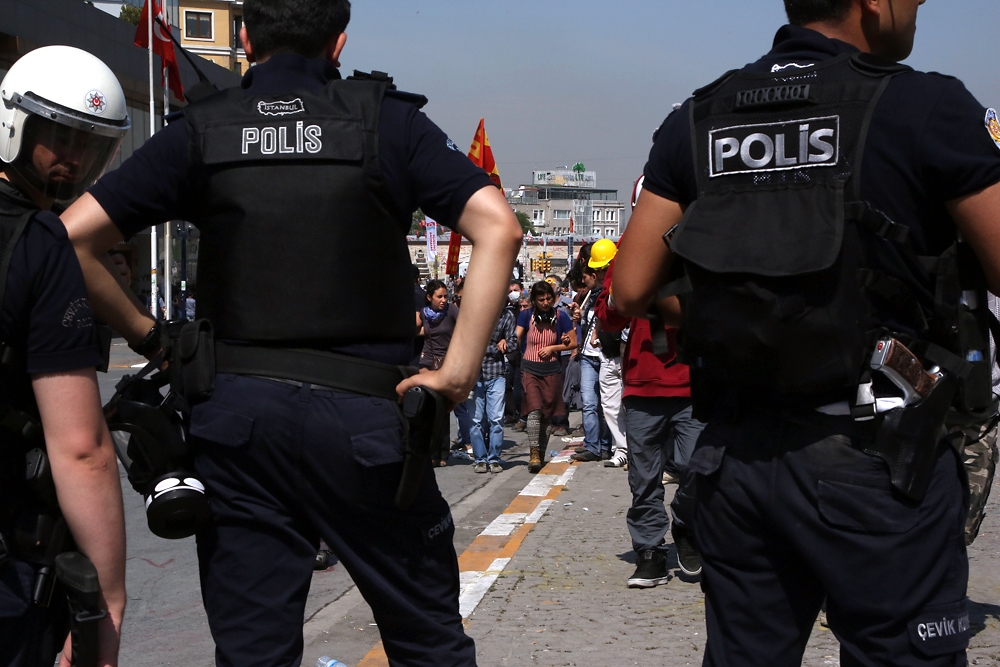 Police and protestors face off in Taksim Square. 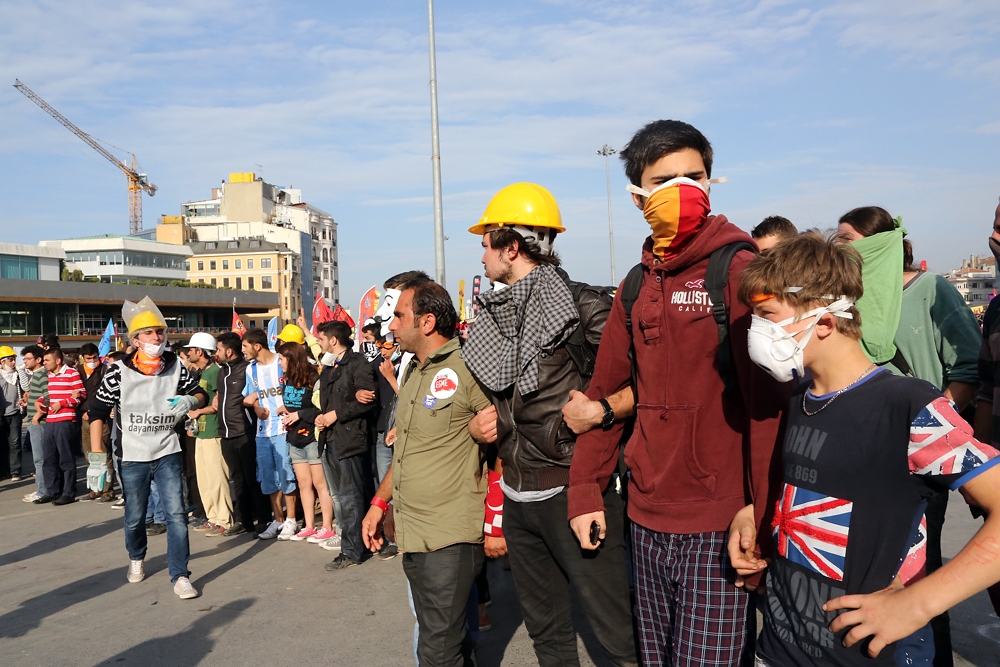 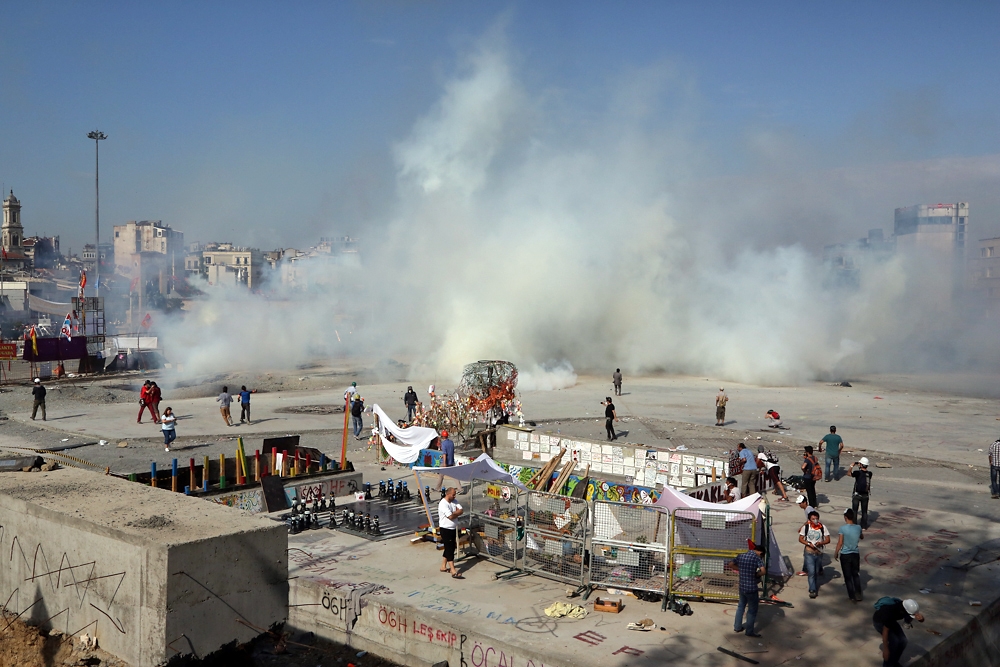 Tear gas blows across the construction site of Gezi Park. 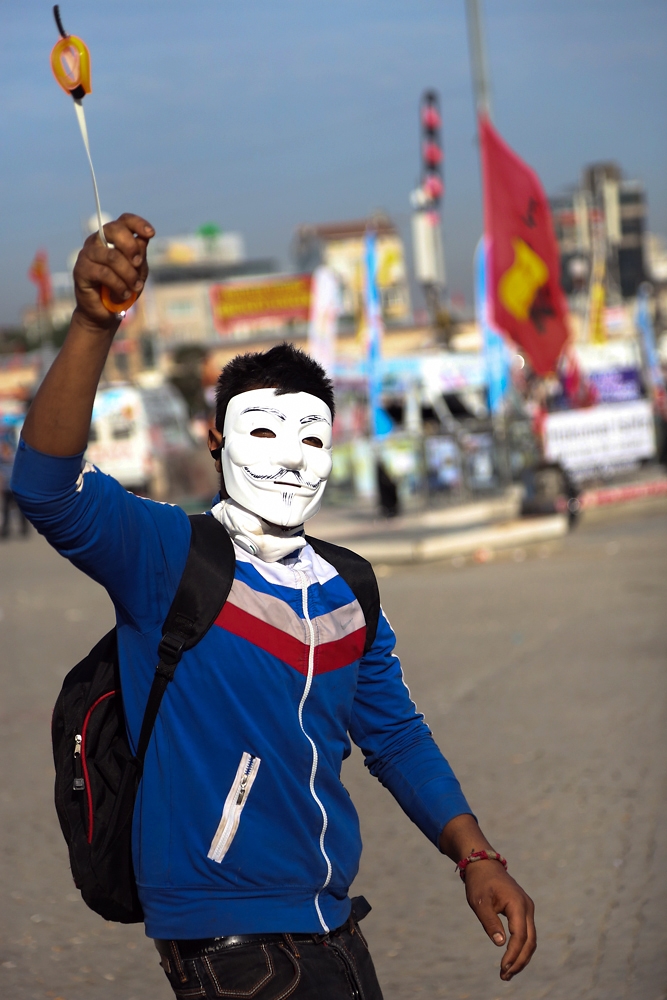 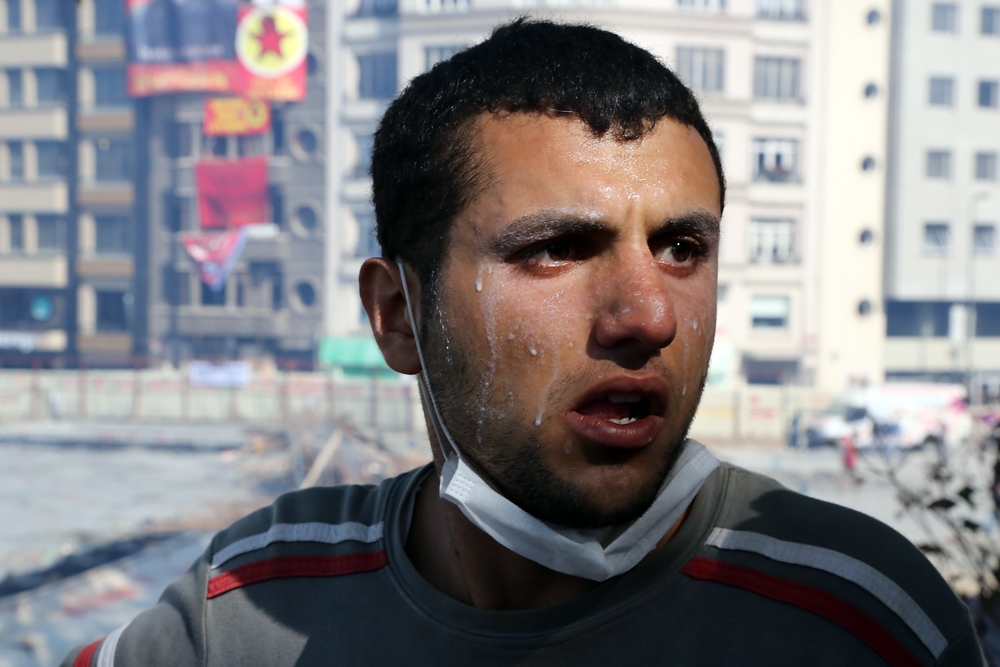 A mixture of antacid and water to ward off tear gas trickles down a protestor's face. 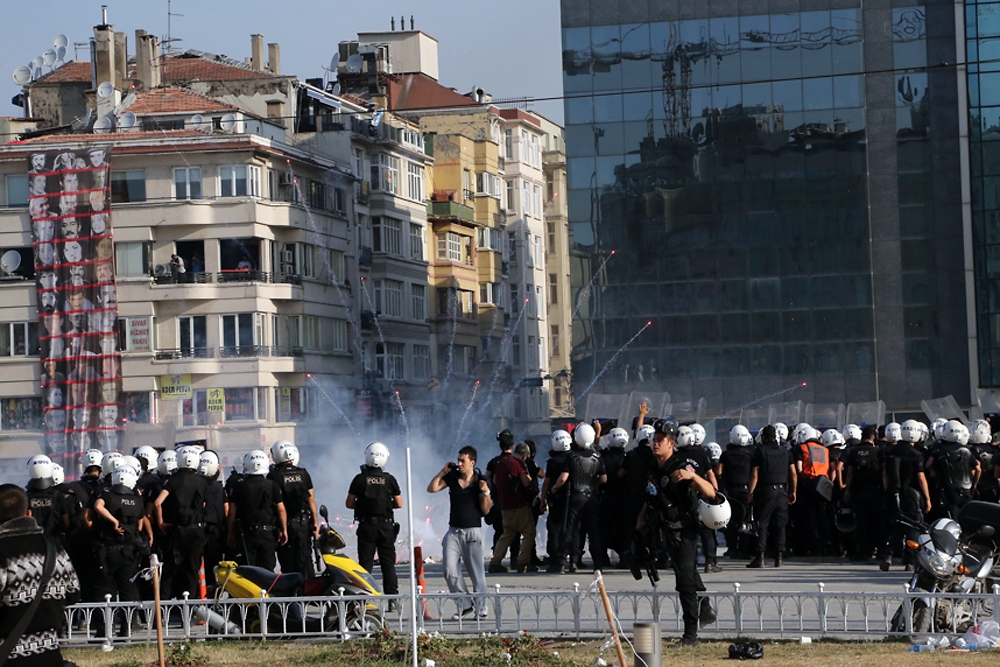 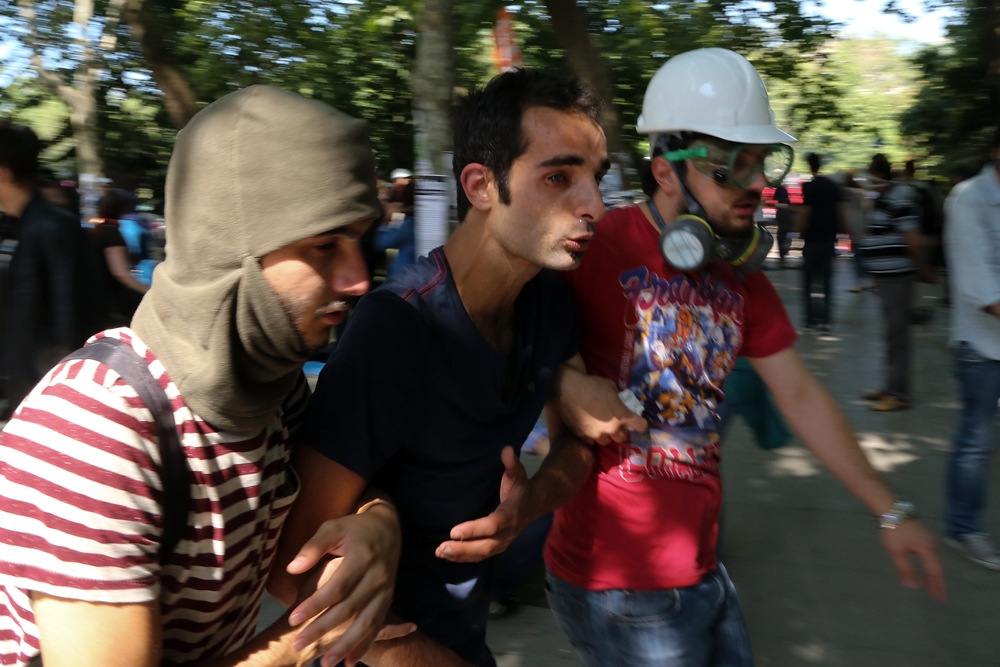 A protestor is helped towards a medical facility. 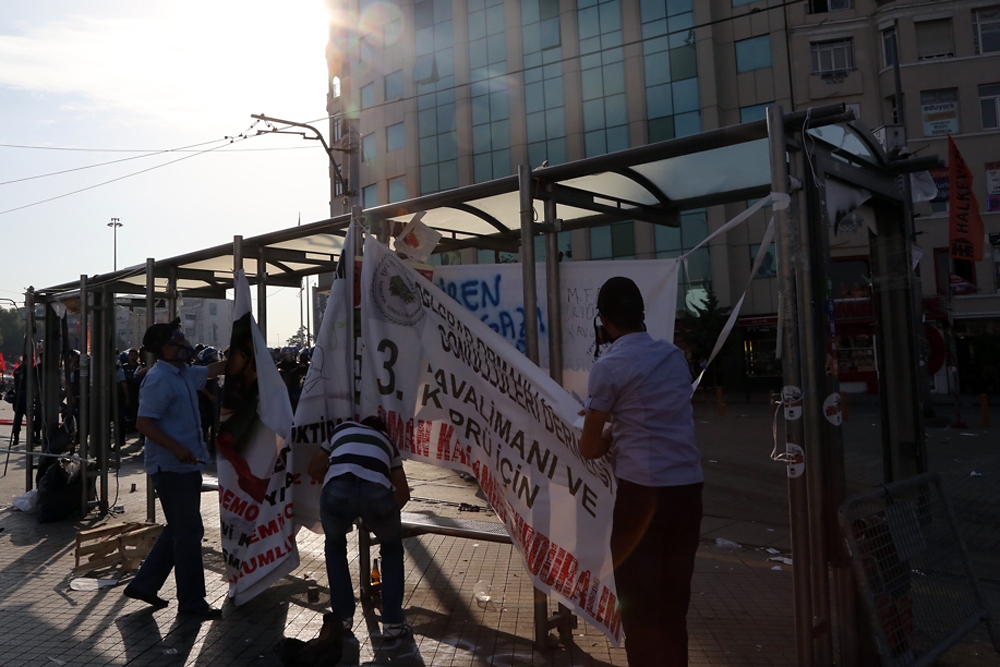 Police remove posters and banners from a tram stop on Taksim Square. 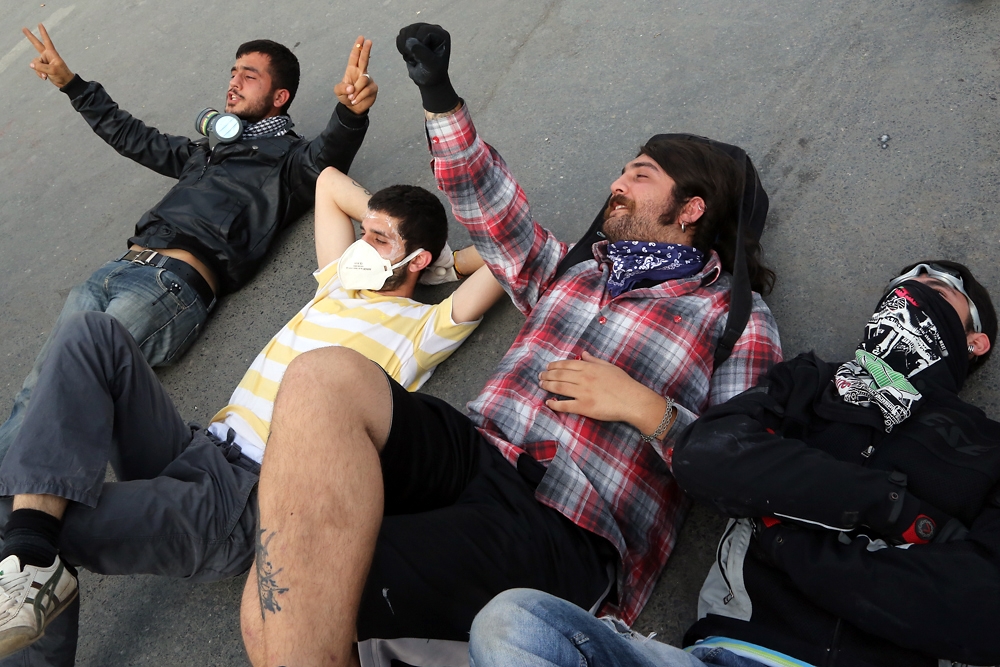 Several protestors lie down in the street in front of police lines. 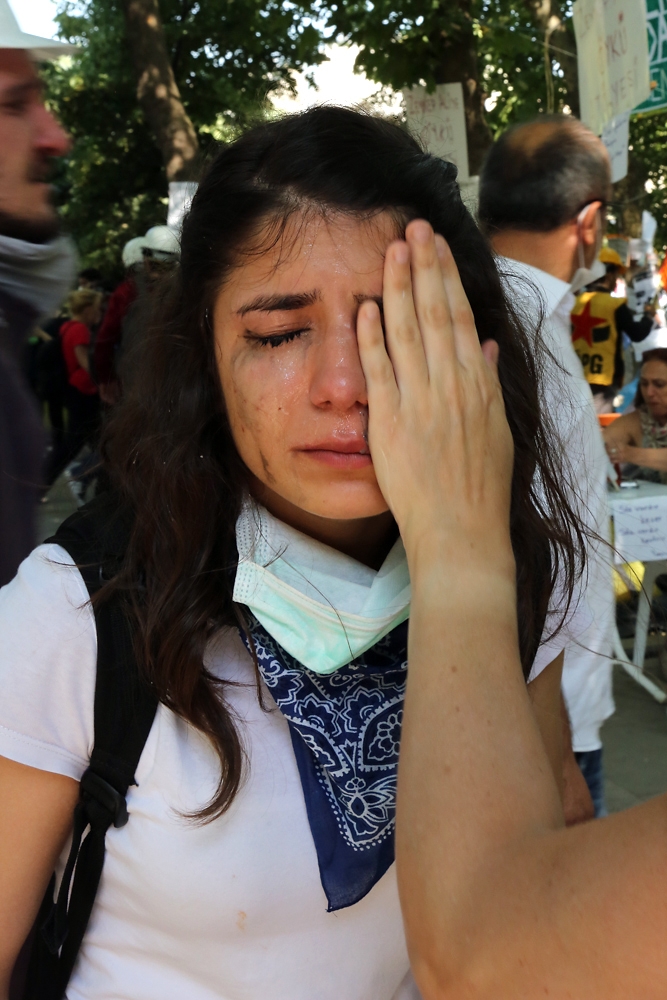 With mascara running down her face, a protestor has antacid rubbed around her eyes to defuse the effect of the tear gas. 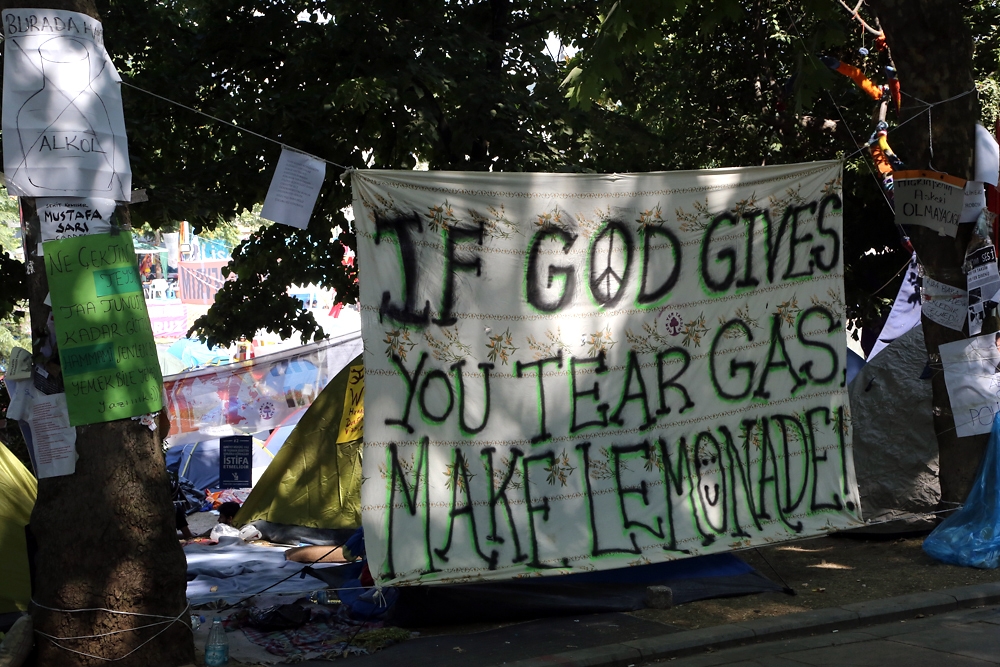 Banners and signs were strung throughout the park before being removed by police. 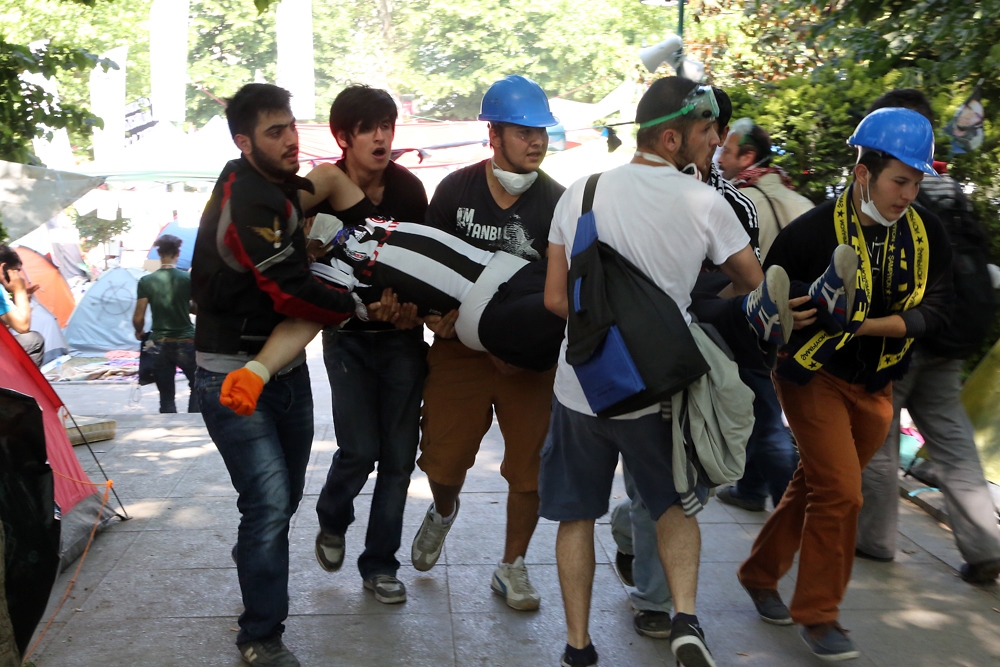 A protester is carried away from the clash with police. 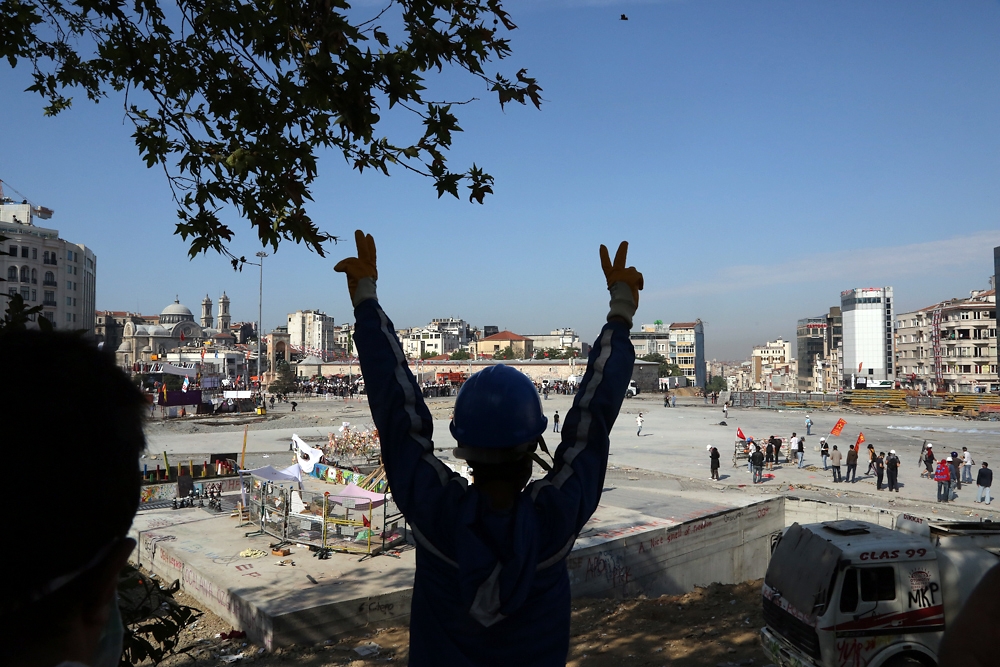 A defiant protester looks down on the police and protesters in Taksim Square below.
prev
next

Nearly two weeks after a protest to defend a downtown Istanbul park mushroomed into a near-national movement, Turkish Prime Minister Recep Tayyip Erdoğan opted June 11 for a power play against his critics. But the protest movement isn’t showing signs of crumbling.

At around 7am on June 11, police swept through Istanbul’s Taksim Square and the nearby Gezi Park with riot vehicles, using water cannons and tear gas to clear out protesters and their banners. Their protest, launched in late May against a construction project in the park, has evolved over the past week into a catch-all campaign against Erdoğan’s authoritarian-minded governing style.

The move against the protesters came after the prime minister had earlier announced his intention to meet with leaders of the Gezi Park movement on June 12 to listen to their concerns.

But a listening ear was not on display as the prime minister used belligerent rhetoric in parliament on June 11 while explaining his actions. "A very strong government is in power,” he said. “We will not only end these events, but will be right on top of these provocateurs and terrorists with the force of law. Nobody can get away with this.”

Meanwhile, in a separate move that cast doubt on the government’s commitment to the rule of law, police took more than 50 lawyers into custody during a rally in support of the Gezi Park movement at an Istanbul courthouse, according to local media.

“The detainment of the lawyers at the courthouse by force brings the question of what kind of a ‘democratic regime’ we are living in,” said a statement issued by the Ankara Bar Association and distributed by Hürriyet Daily News.

Protesters scheduled a rally for 7pm on June 11 at Gezi Park, setting up a potential contest of wills between Erdoğan and his critics, Hürriyet Daily News reported.
“If you call this harsh, I'm sorry to tell you that Tayyip Erdoğan will not change,” the prime minister told parliamentarians on June 11.

While injuries were reported in the June 11 police operation, the scale did not equal that of the initial May 31-June 1 clashes in Istanbul and other cities, which sent hundreds to the hospital with various injuries and provoked an international outcry.

The government has alternated between apologizing for the initial harsh police response to the protests, promising an investigation into reports of police abuses, and asserting that it will not tolerate chaos.

The demonstrations have contributed to a nearly 15-percent dip in Turkey’s stock market over the past week, during which the national currency, the lira, also has taken a beating. With that in mind, Erdoğan also took protesters to task for allegedly causing businesses to suffer in the Taksim neighborhood, a critical commercial artery.