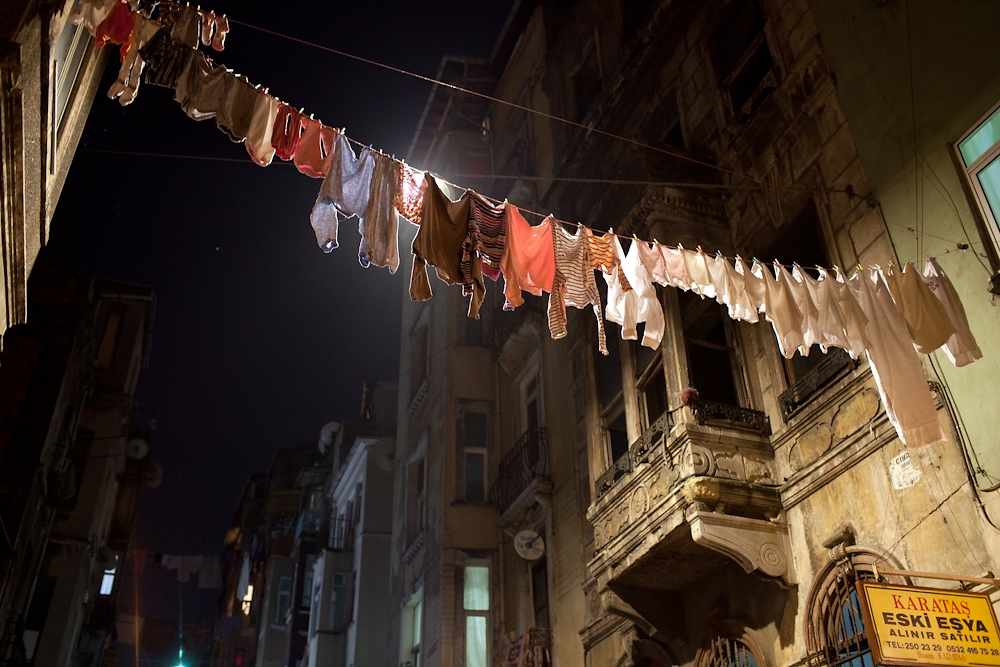 Freshly washed clothes stretch between apartments across the formerly grand road in the Istanbul neighborhood of Tarlabasi. 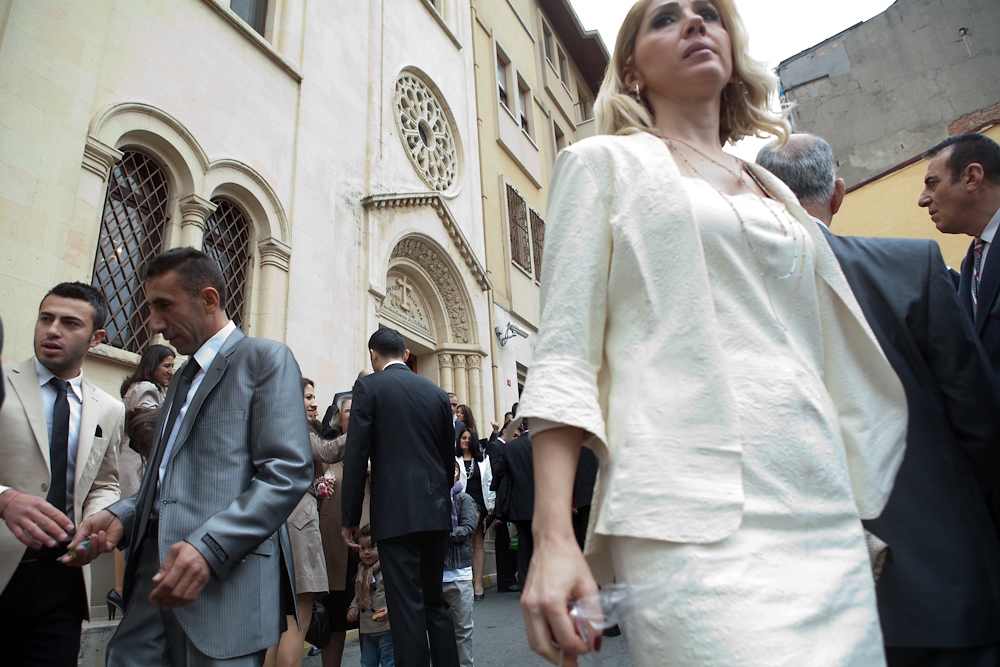 Many churches in the formerly Christian area continue with regular services - particularly at special events, such as Easter. 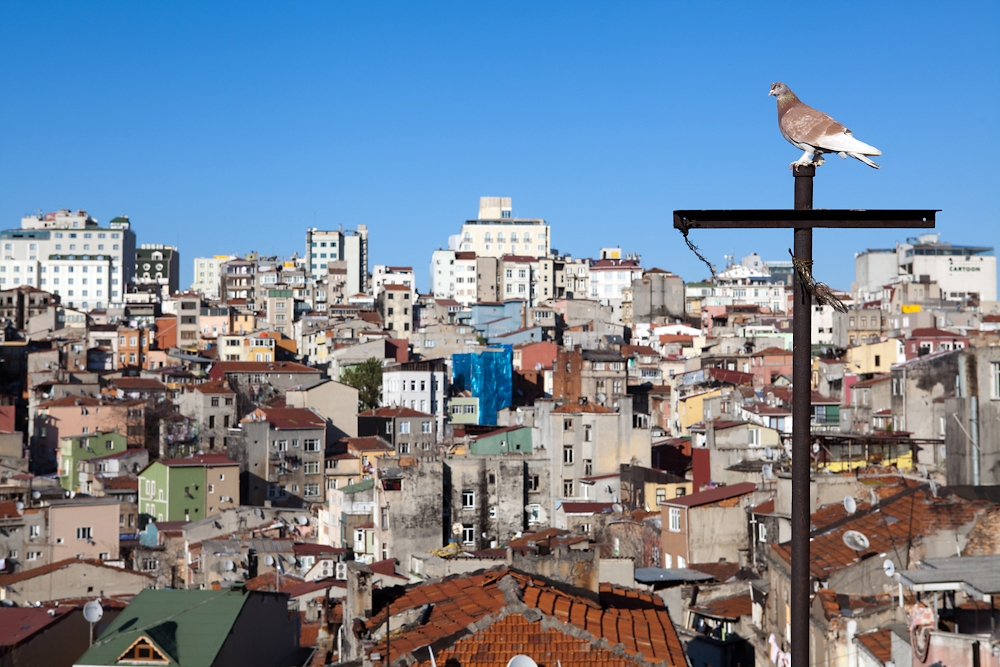 Many see Tarlabasi as a blight on the city given its close proximity to Taksim Square, a tourist destination in the horizon. 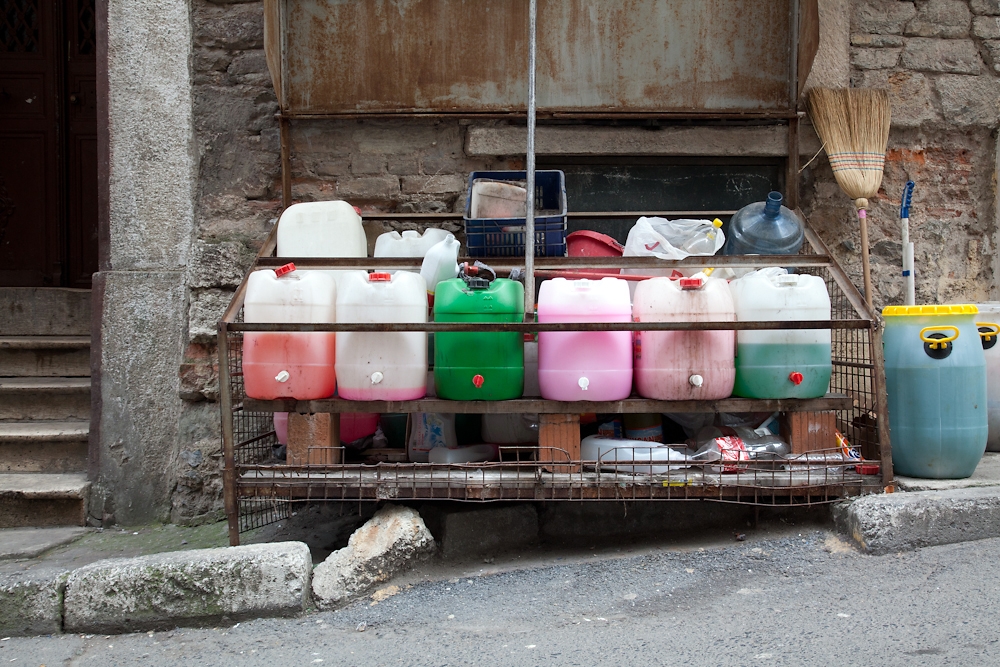 Local corner shops sell household items in bulk to residents, who re-use any spare containers, such as soft drink bottles. 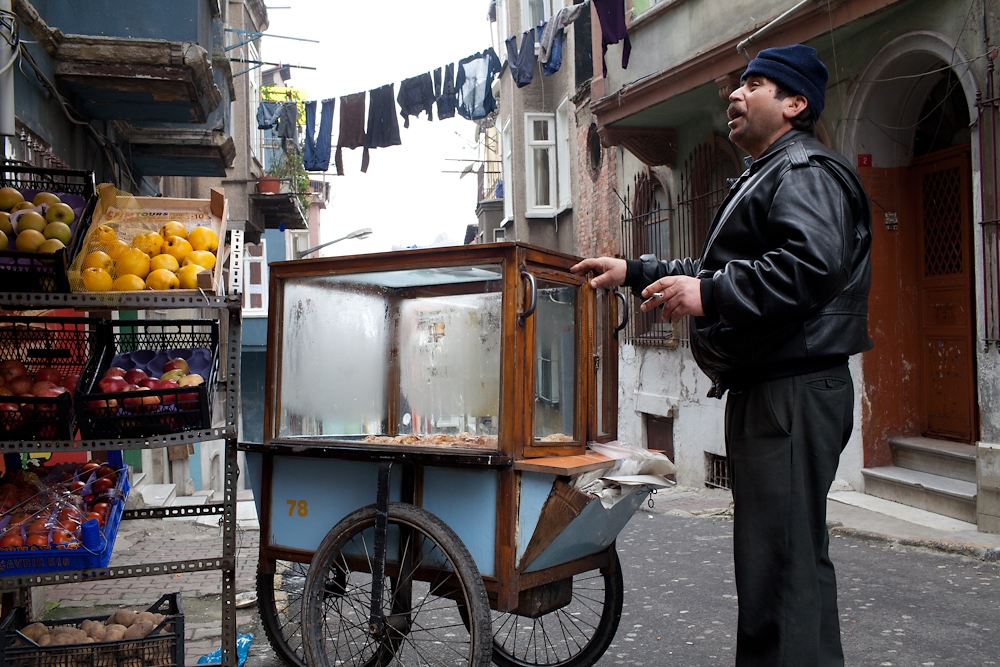 A pastry seller calls out his products to residents as he walks the streets. 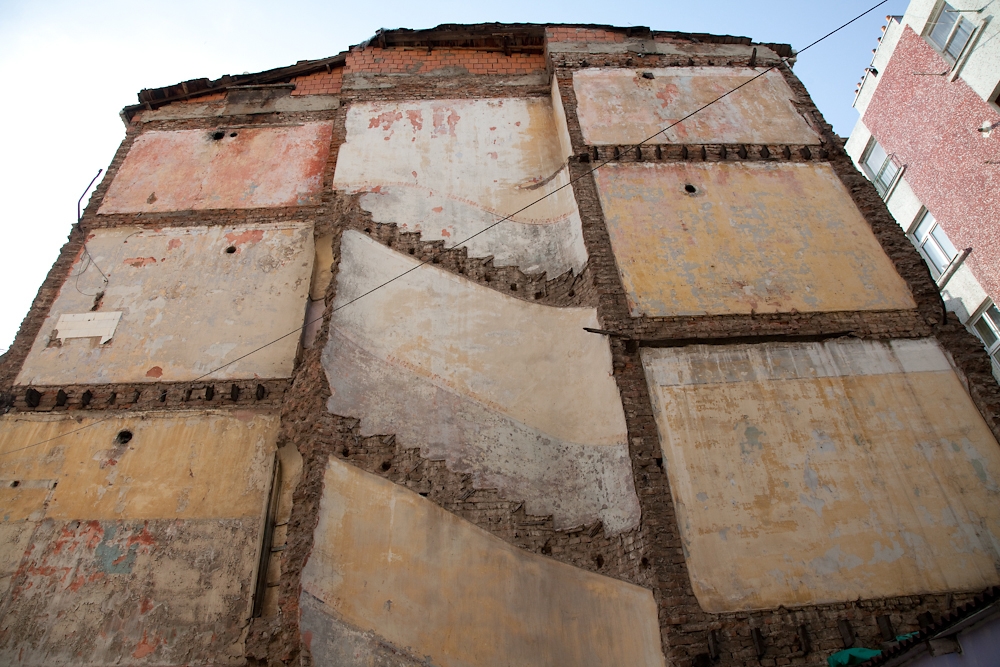 Many of the buildings in Tarlabasi have fallen into disrepair, frequently due to disputed ownership issues. 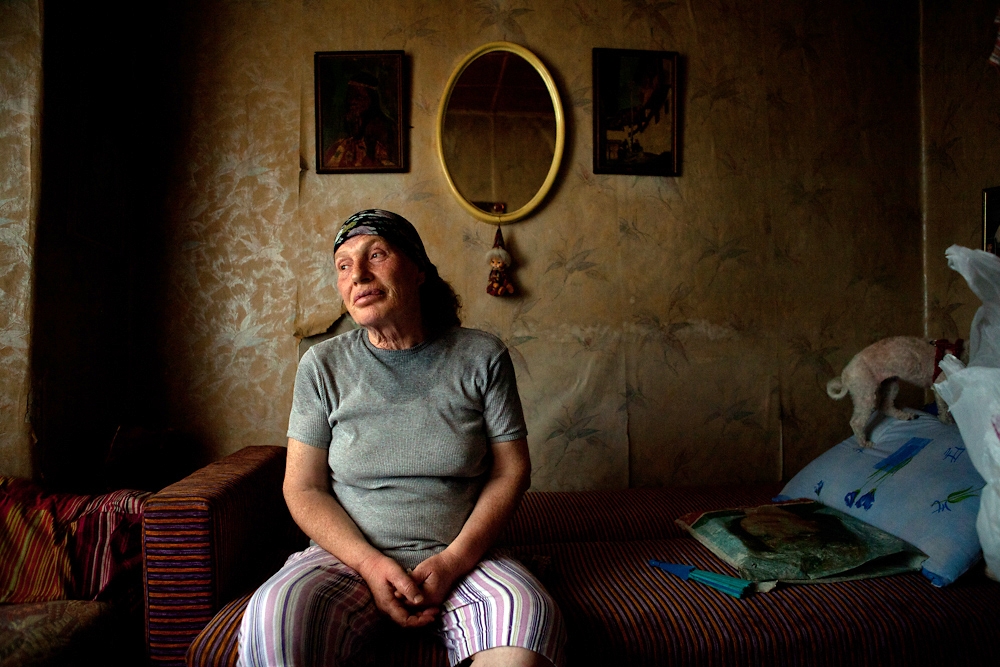 Mine, who is fighting her eviction, feels safer in Tarlabasi as a transgender person than elsewhere in Istanbul. 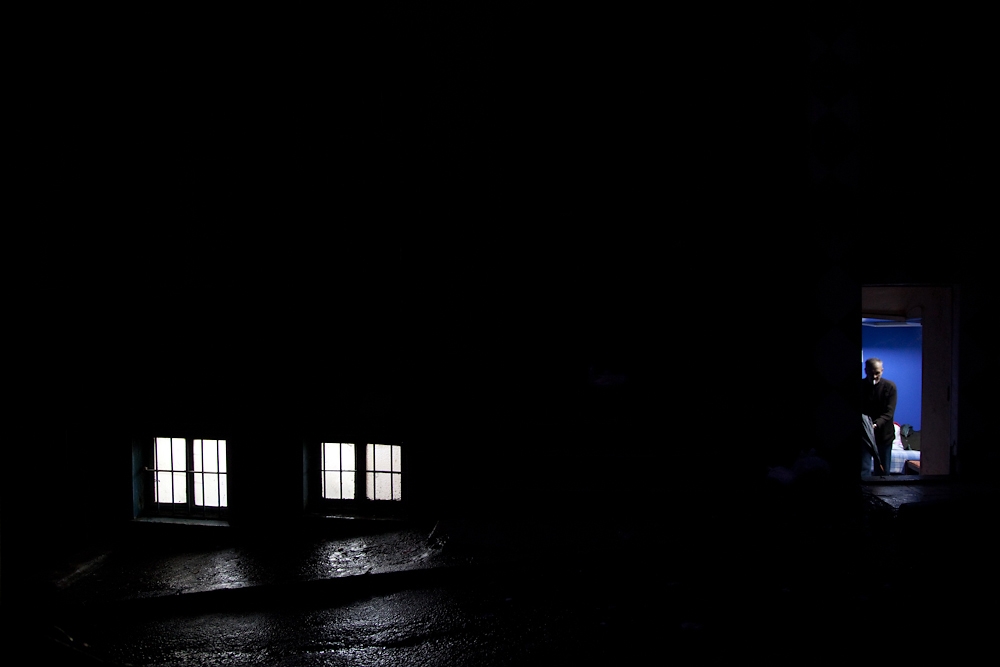 Street lights in many parts of the neighborhood have been turned off for more than two years. 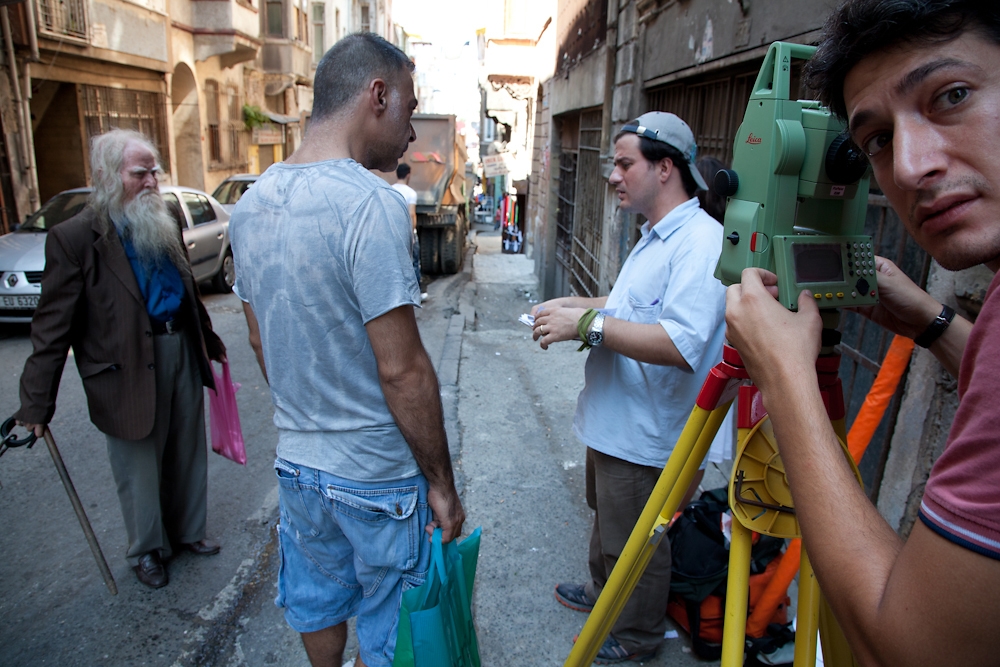 Municipality workers survey parts of the district to upgrade roads prior to the evictions and redevelopment. 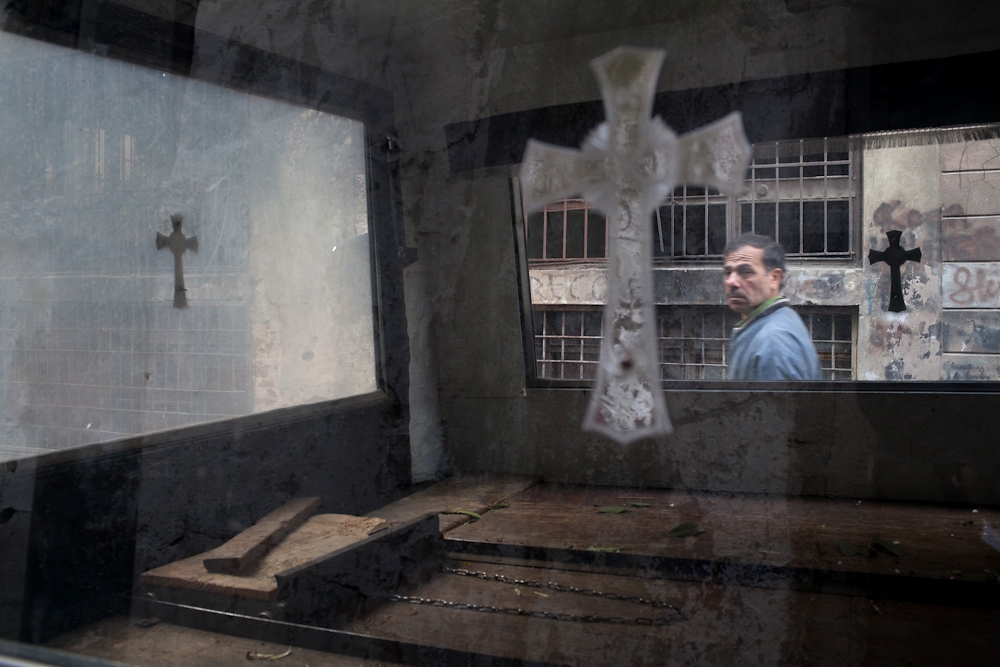 Once a mainly Greek and Armenian area, Tarlabasi is still home to many businesses such as the main Christian funeral director. 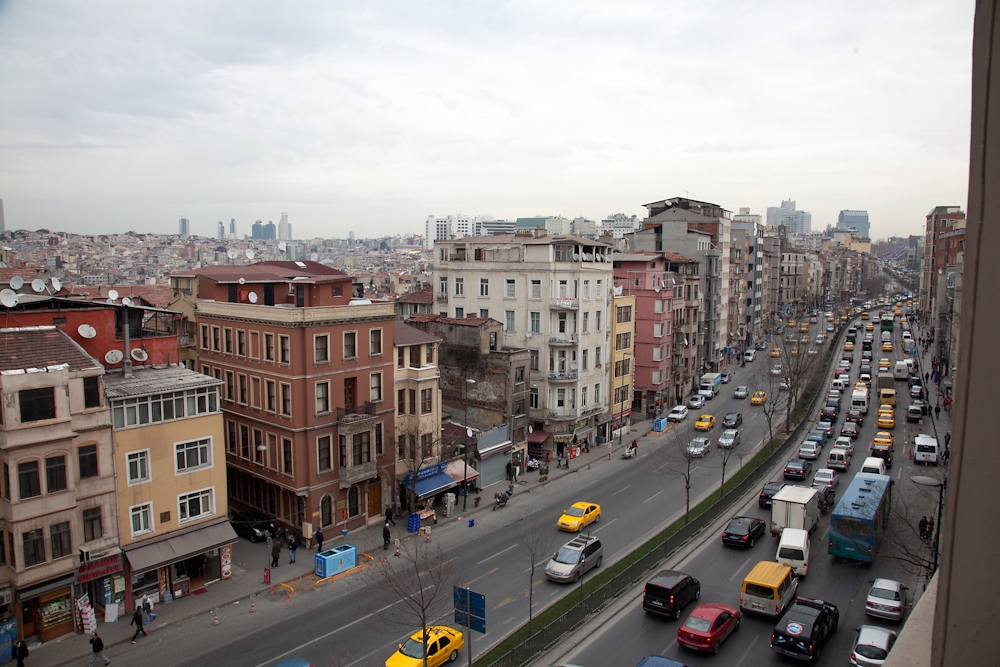 The main boulevard bisected the district and led to the eventual decline of the area south of the road. 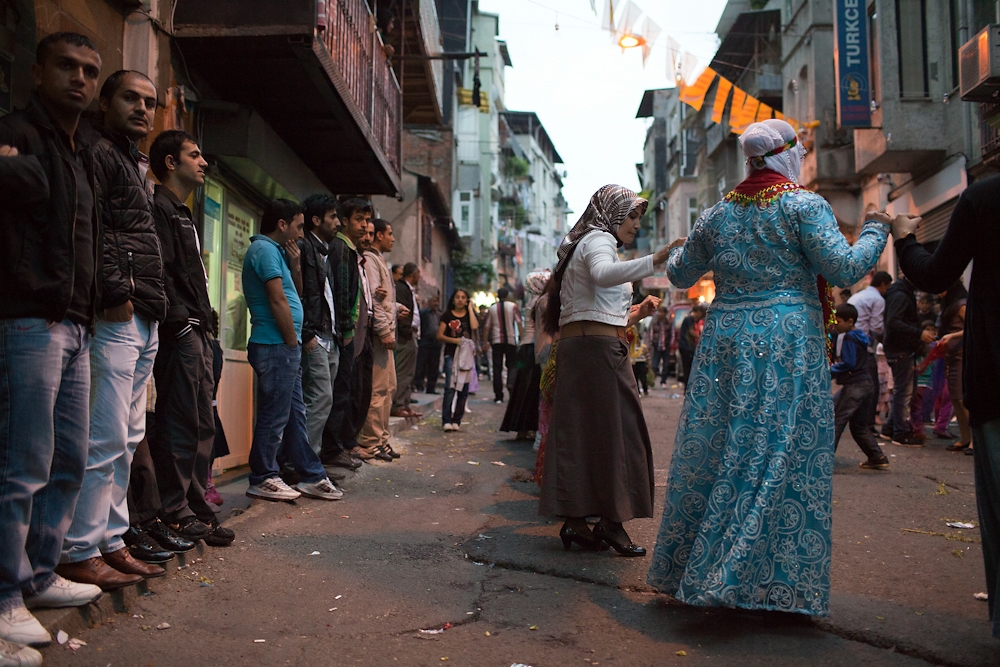 With music and dancing, a wedding party brings life to the area on an early Saturday evening. 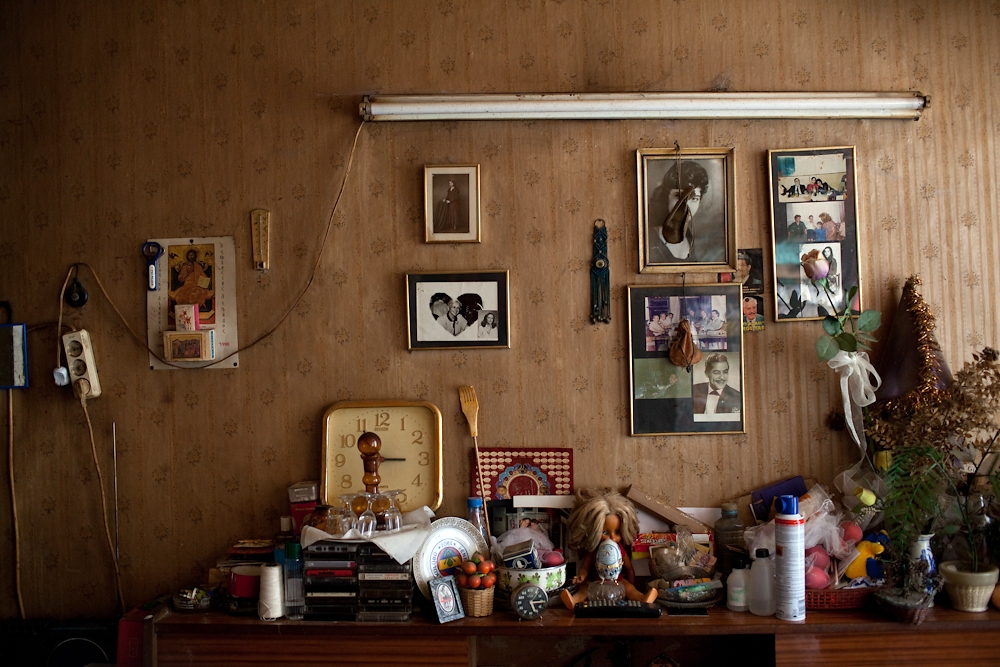 A room of a septuagenarian's Tarlabasi home reflects a lifetime of memories in the neighborhood. 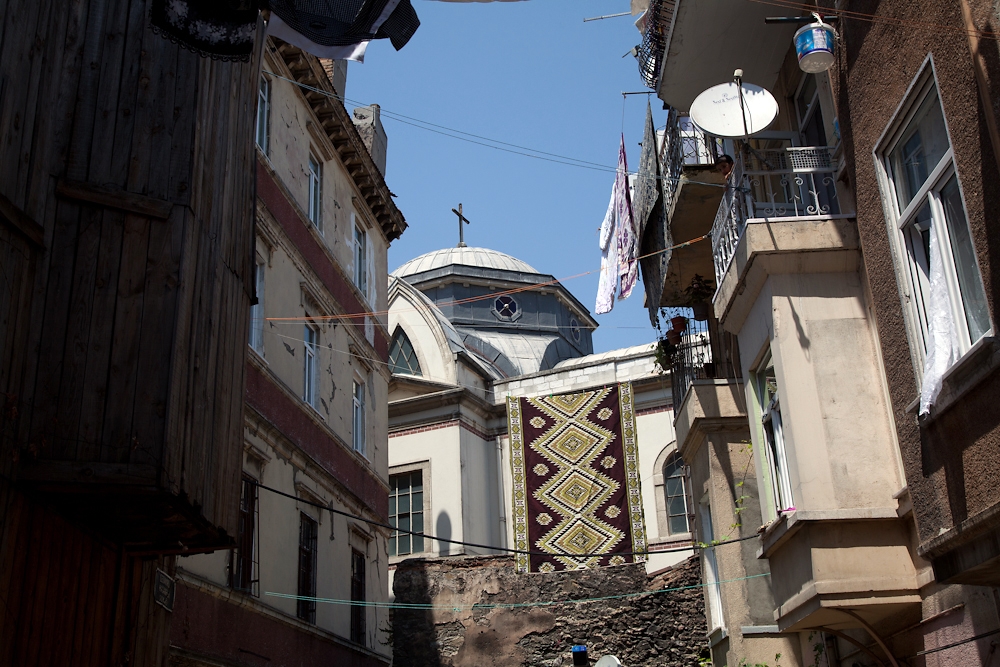 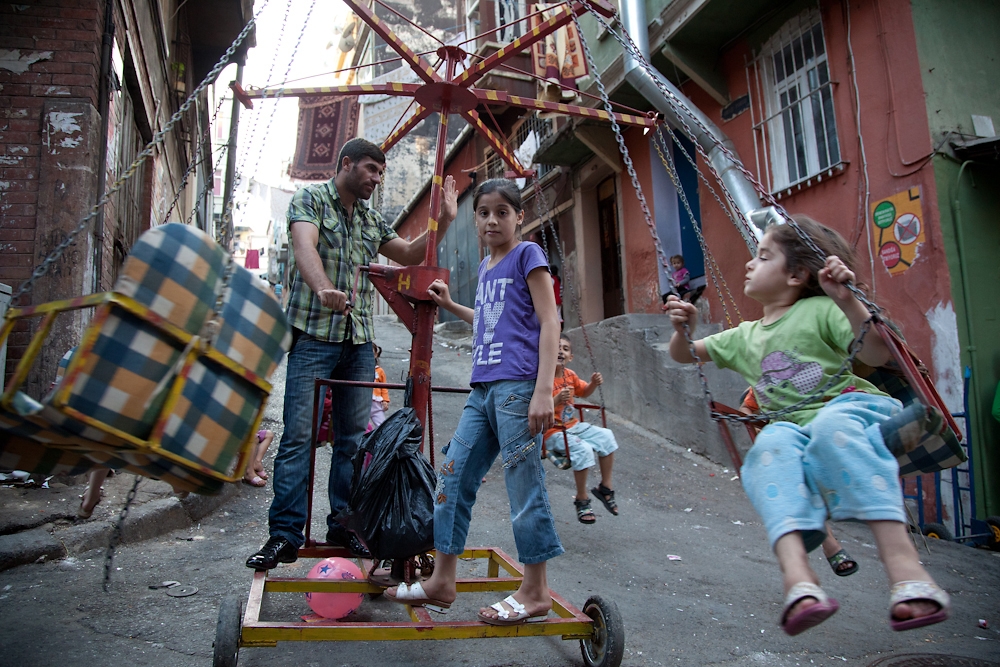 Children queue up for the roundabout ride, which moves from street to street through the district. 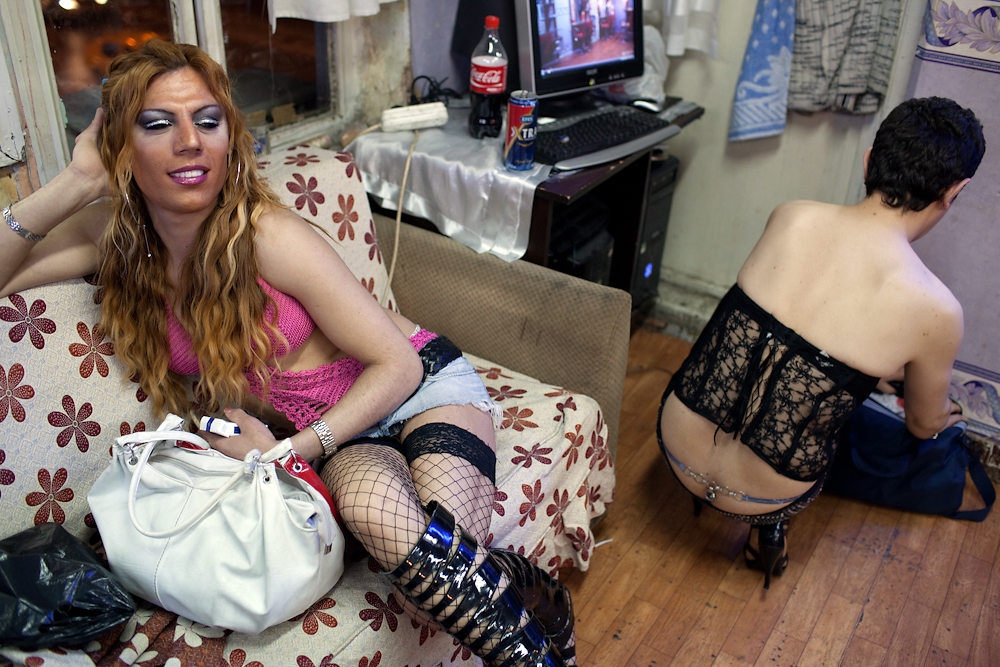 Most of Istanbul's transgender sex workers live and work in Tarlabasi. 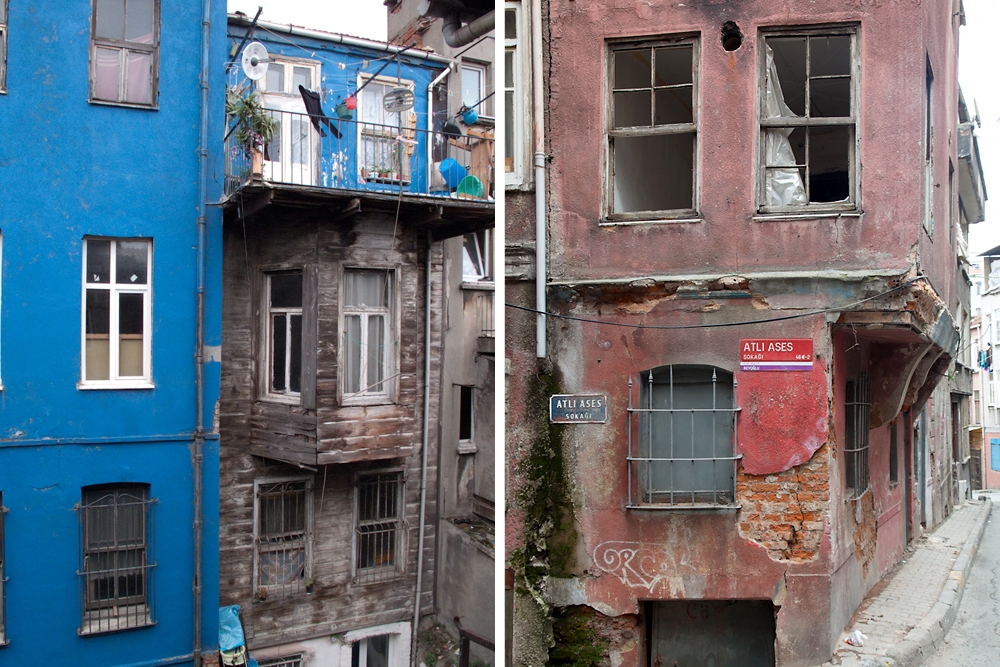 The stone and brick built district was established in the late 19th Century after the initial wooden houses burnt down. 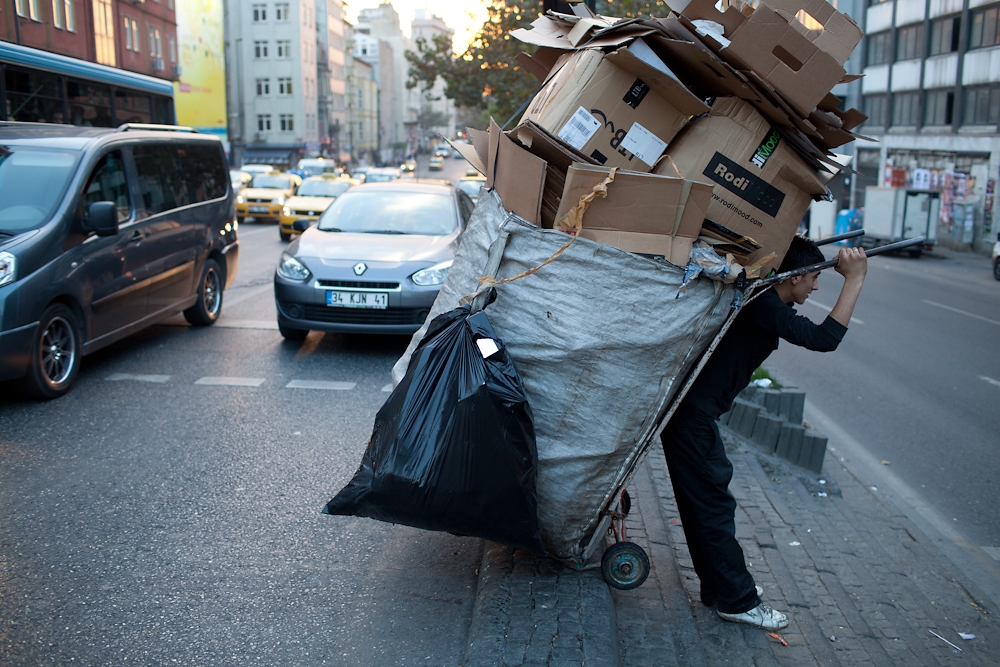 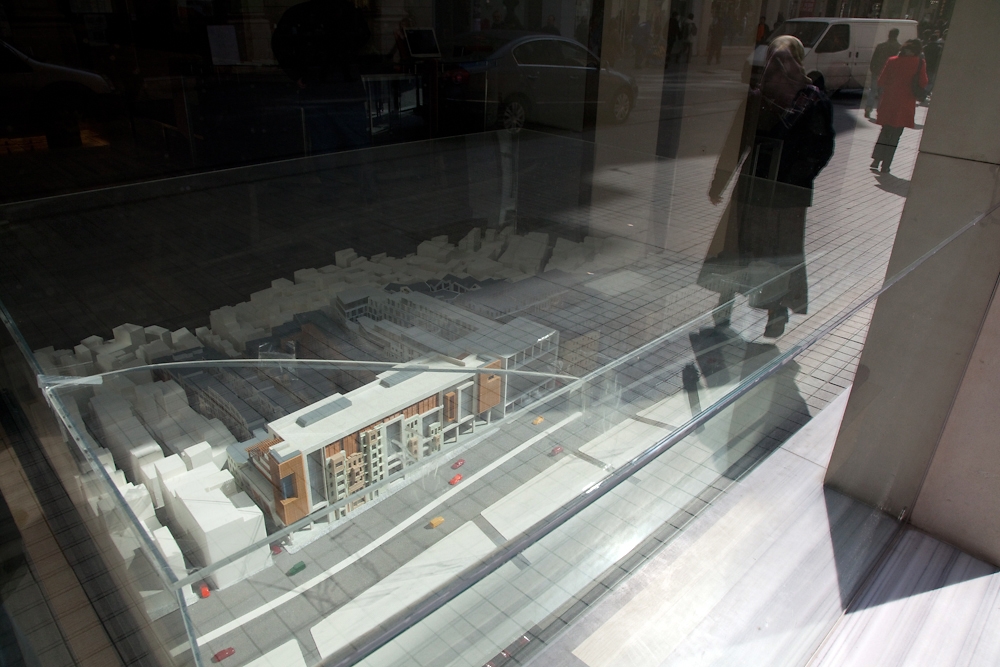 A model in the central shopping area shows the development that will lead to the destruction of most of the historic buildings. 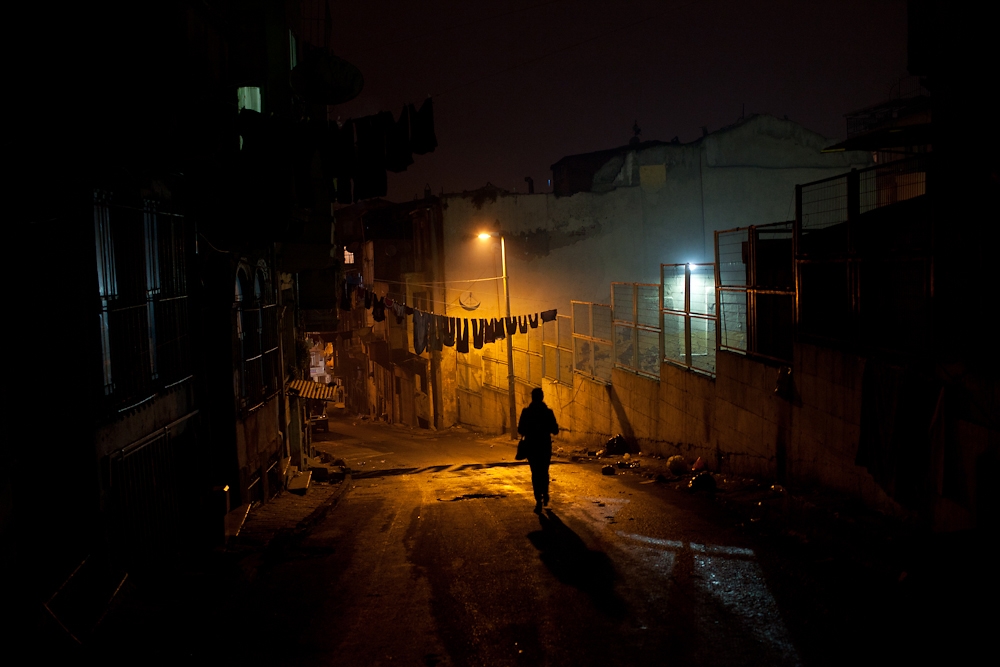 Many of the homes have been boarded up and remain empty. About half the properties are now vacant.
prev
next

The central Istanbul neighborhood of Tarlabaşı has long been labeled a no-go area, a safe haven for shady business, even a “terrorist’s nest” for the banned Kurdistan Workers’ Party. An ambitious urban renewal project hopes to scrap that image and introduce five-star hotels, upscale shopping facilities and office lofts. But as evictions get underway, a fierce debate is emerging about how to reconcile residents’ rights with the government’s desire to beautify Istanbul.

The project zone’s current 3,000 inhabitants, all of whom will be displaced, have long protested the project, but resistance is likely to fade as residents are gradually forced out.

“I was at the hospital with my sick mother,” recounted one woman, who asked not to be named. “They called me and told me to come home immediately. When I arrived at my apartment, they had already kicked in the door and thrown all my things on the street. I have nowhere to go.”

Her upstairs neighbors are just as desperate. “We didn't receive any letter telling us that we would have to leave by the middle of July,” said another woman, who asked to withhold her name. “They just turned up at our door a week ago and told us to pack.”

For days now, the woman and her husband have been sitting on boxes and bags, waiting to be evicted from their home of more than 20 years.

Across the street, a barber closely watched a small moving van with chairs and a drying rack dangling dangerously over the side. "It's hard to believe that this neighborhood will be gone,” he commented. “But we have to accept that Tarlabaşı is finished.”

Built around 1870, the slim bow-fronted houses in Tarlabaşı are unique examples of Levantine architecture in Turkey. For almost a century, a non-Muslim lower-middle class of Greek, Armenian and Jewish craftsmen inhabited the neighborhood. Today, it houses those on the margins of society: Kurds displaced by the ongoing conflict in Turkey’s southeast, transsexual sex workers, Roma and African migrants on their way to Europe.

After Turkey’s 1980 military coup and the subsequent implementation of neo-liberal economic policies, radical urban restructuring left its stamp on the neighborhood. The six-lane Tarlabaşı Boulevard, created in 1988, physically severed Tarlabaşı from the rest of its home district of Beyoğlu.

Playing the central role in that campaign is construction company GAP Inşaat, a subsidiary of Çalık Holding, whose chief executive officer, Beyrat Albayrak, is the son-in-law of Turkish Prime Minister Recep Tayyip Erdoğan. In 2007, GAP Inşaat secured the government tender to reconstruct a 20,000-square-meter part of Tarlabaşı.

The city government argues that GAP Inşaat’s makeover of Tarlabaşı is in the public interest, but no financial compensation or other material support has been offered to residents affected by the transformation.

The Social Housing Administration of Turkey and the district government of Beyoğlu, however, are offering Tarlabaşı residents apartments for sale in one of the newly built high-rises in Kayabaşı, a remote development zone on the outskirts of the city.

But the cost and the distance from most residents’ Tarlabaşı workplaces – roughly a two-hour bus ride – make the high-rise option a non-starter for many. Others say they have not been offered apartments.

“I would move to Kayabaşı immediately if I could afford it,” said disabled Tarlabaşı resident Esad Yarış, who relies on a modest income from social security. “But 300 lira ($185) a month [for a mortgage] is simply too much for me. We cannot pay more than 100 lira ($62) a month.”

Roughly 70 percent of the people living in Tarlabaşı are similarly unable to buy property, according to a report by Istanbul’s Bilgi University; that compares with an average of 20 to 30 percent of Istanbul’s population of roughly 12.6 million people, the Istanbul Chamber of Architects estimates.

Mücella Yapıcı, spokesperson for the Istanbul Chamber of Architects is concerned that projects like “Tarlabaşı Yenileniyor” will not only displace a large part of the current Istanbul population, but also negatively impact the city as a whole.

“The biggest danger of these urban renewal areas, of radically changing urban spaces with total unconcern for the people who live there, is the destruction of urban peace,” Yapıcı said. “[W]hile we never really had a homelessness problem in Istanbul, one can see more and more homeless people on the streets now. The current urban policy denies poor people the right to the city.”

But some Tarlabaşı residents say they won’t go without a fight for that right. “I live here. It’s my neighborhood,” said Sakir Isik, a migrant from southeast Turkey who works as a hospital cleaner. “Even if they offer us a villa, I won’t move out of here.”