Turkey: Twitter and Mass Media Become Part of the Story 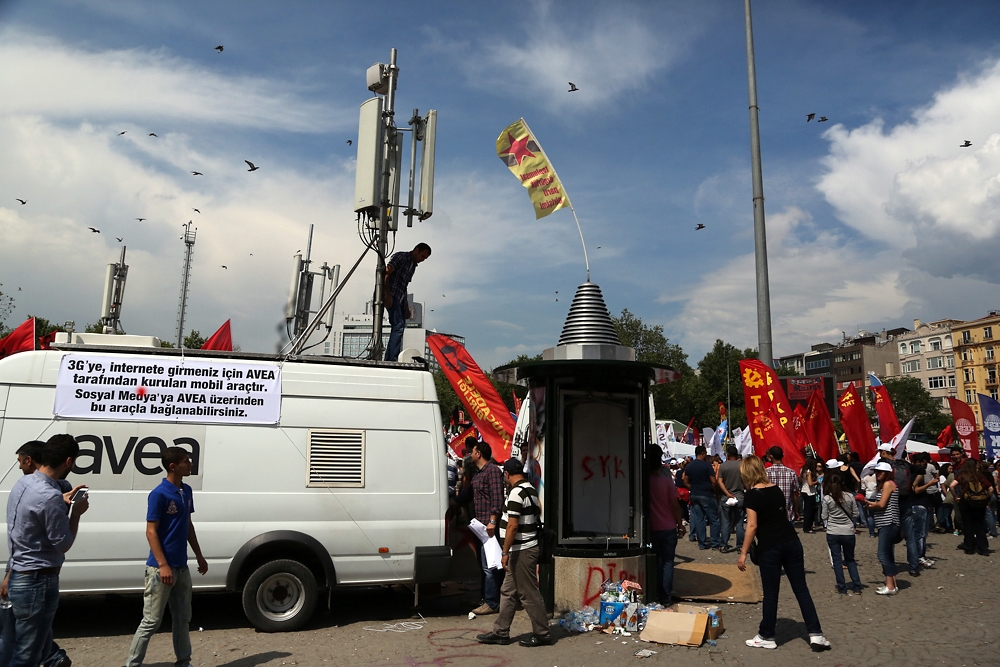 “From the beginning of the resistance protest, [social media] has been crucial,” explained one activist, working indoors on her laptop one evening as teargas filled the neighborhood, not far from Istanbul’s Taksim Square, ground zero for Turkey’s protest movement.

“The mainstream news did not cover the events properly. It misled the people about the extent [of the protests], and what the movement was about,” the activist asserted. “Social media became the only way to present the truth of what is happening to the protestors, and to the whole country.”

Turkish state media has often played a subservient role to incumbent authorities. But with all the main private media companies now under the ownership of large business conglomerates, eager to avoid tax inspections or to secure government contracts, reliable alternatives are few.

“There is only Twitter. I don’t even bother to look at what is on TV anymore,” said Mehmet, a 20-year-old business studies student in Istanbul, speaking with his Blackberry in hand.

Just over two years ago, Turkish leaders supported the progenitors of the Arab Spring -- activists who skillfully used social media to foment protests that toppled regimes in the Middle East and North Africa. Now, some of those very same officials, including Erdoğan, are adopting a very different stance toward activists who rely on social networks to mobilize support for a cause. On June 5, 25 people were arrested in the western city of Izmir and charged with allegedly spreading false information via social media, the state news agency Anadolu reported.

Erdoğan has vented on several occasions in apparent frustration over social media’s ability to prevent his government from controlling the narrative about recent events in Turkey. At one point he railed against Twitter, the social network favored by his critics, calling it “evil.”

Erroneous information spread on social networks has provided Erdoğan with an opening that he has tried to exploit. On June 1, for example, a purported citizen reporter filed on iCNN that police allegedly were using the herbicide Agent Orange against demonstrators in Istanbul. The inaccurate claim (which CNN said had been removed, but could still be accessed on June 5) went viral on Twitter before being discredited.

“You can find every kind of lie," on Twitter, Erdoğan groused on June 2.

Since then, the importance of social media to the protest movement has only seemed to grow. With that expanding influence, activists say they recognize the need for responsibility. “At the very beginning, at [the] start of protest, we were forwarding and re-tweeting everything that came to us, and this created a serious amount of disinformation, and even sometimes created panic, with the stories that were not actually true,” explained the Taksim-Square activist, who asked not to be named from fear of prosecution. “But after [the] second or third day, we created standards.”

Activists now posting updates on designated pages on Facebook and Twitter are required to give the date and time they received the information, she continued. “This allows us to quickly delete obsolete information. We also try to verify the source as well.”

As much as other social-media consumers, protestors, most of whom seem to use smart phones during demonstrations, need accurate information to enhance their own security. They believe social media is giving them an edge over the security forces.

“It is helping so much,” said Ayse a 32-year-old librarian. “When there are clashes with the police, we are always receiving twitters” about the advent of police or the levels of tear gas.

The Taksim-Square activist used Twitter to alert protestors on the Square about the approach of three armored police trucks, backed by scores of officers. A grainy image taken from a live online camera feed of a nearby road provided the tip-off. The sites that provide such feeds often fail, a breakdown the activist blames on heavy traffic or government interference.

Yaman Akdeniz, an internet expert and law professor at Bilgi University in Istanbul, has been following the protest movement. Akdeniz believes the activists are on the cutting edge of social media. “They are using not just Twitter, but some very exciting technology …that allows protestors to send live feeds from the protests,” Akdeniz elaborated. “As far as I understand, 2 million tweets were sent in the first 48 hours. That’s an incredible statistic for any country.”

Despite Erdoğan’s stated distaste for Twitter, he, or at least someone acting on his behalf, has sent out tweets downplaying the possibility that his government is grappling with a “Turkish Spring,” and quipping about how some Istanbul residents have been clanging of pots and pans to show solidarity with the Taksim Square protesters.

Finance Minister Mehmet Şişmek has also taken to Twitter, denouncing in English selected reporters for allegedly lying about the protests “to provoke [the] public.”

Erdoğan’s outburst has led to fears that he may be thinking about ordering a block on Twitter. Bilgi University’s Akdeniz, though, believes that such a prospect is unrealistic.

“People are already using proxy websites and secure browsers like Tor, developed by the Electronic Frontier Foundation, [that] allow you to use sites without interference,” Akdeniz said. “It is technically impossible to block these sites. There are so many tools available. To block access to Twitter or Facebook would be futile.”

Mainstream TV now is starting to broadcast extensive coverage of the unrest, and one broadcaster, 24-hour news channel NTV, has apologized for its spotty initial response, though the damage already had been done.

Media reform now is becoming a prominent protester demand. “After what has happened nothing can be the same again,” the Taksim Square activist asserted. “The media cannot be left to [the] control of big business.”