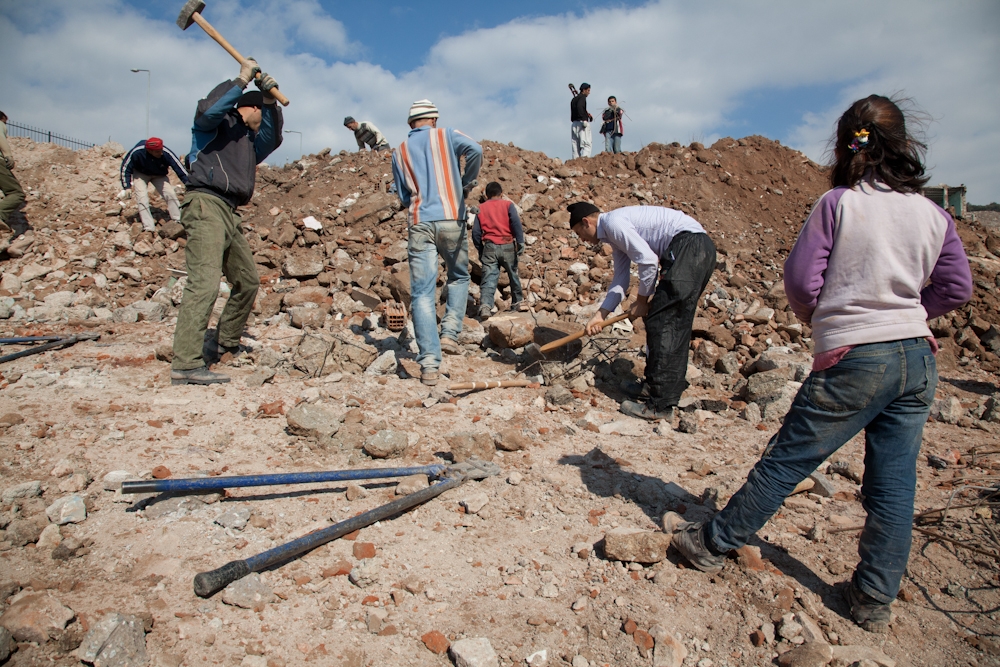 Local people salvage metal, plastics and materials from demolished homes to be resold as scrap. 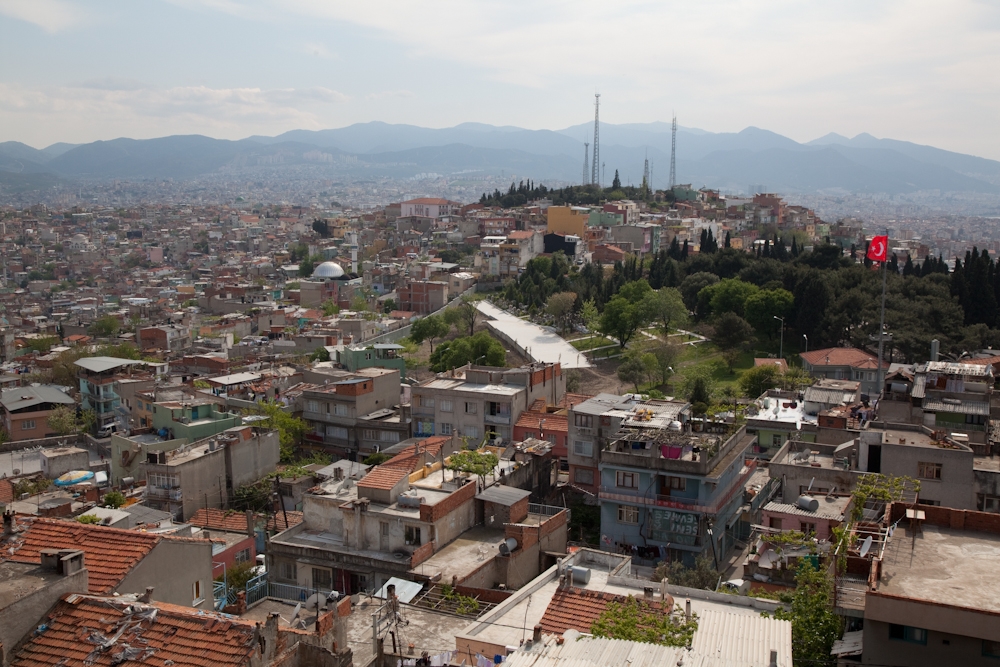 A view of Izmir’s Kadifekale district two years ago, prior to the demolitions. 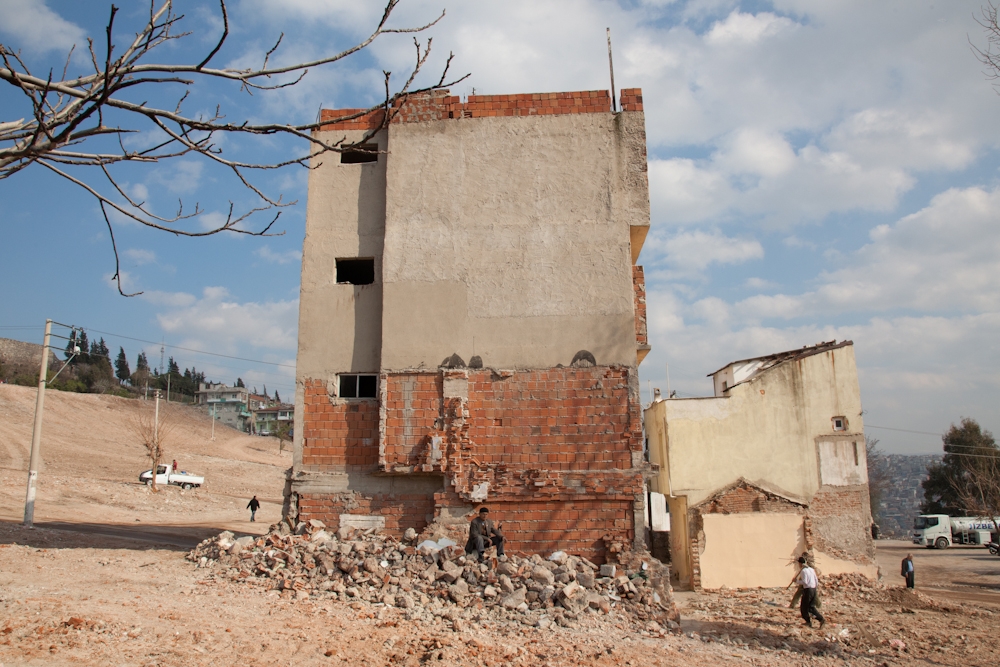 Some residents still have legal battles with the authorities, hence homes and shops remain in place while court cases continue. 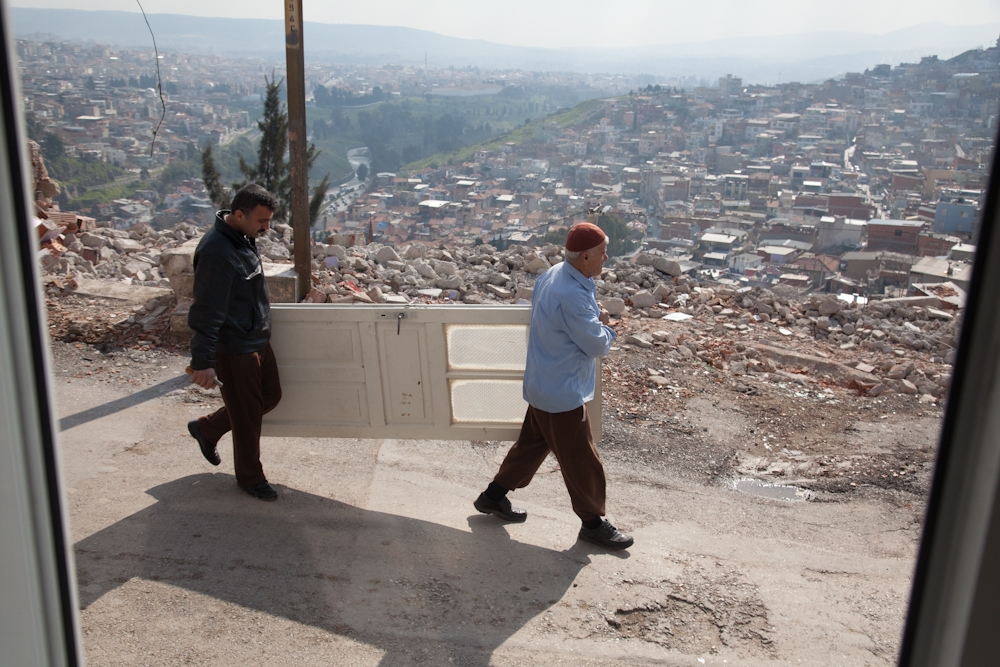 Residents of Kadifekale reclaim as much of the properties as possible before they are knocked down. 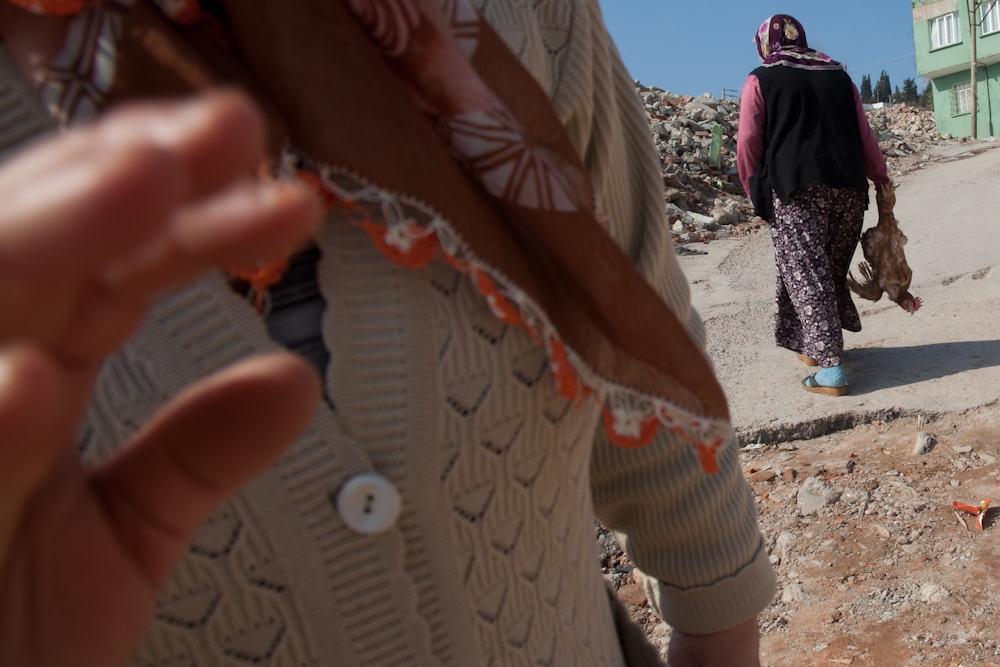 A local resident carries a live cockerel back to her home through the rubble of houses knocked down recently. 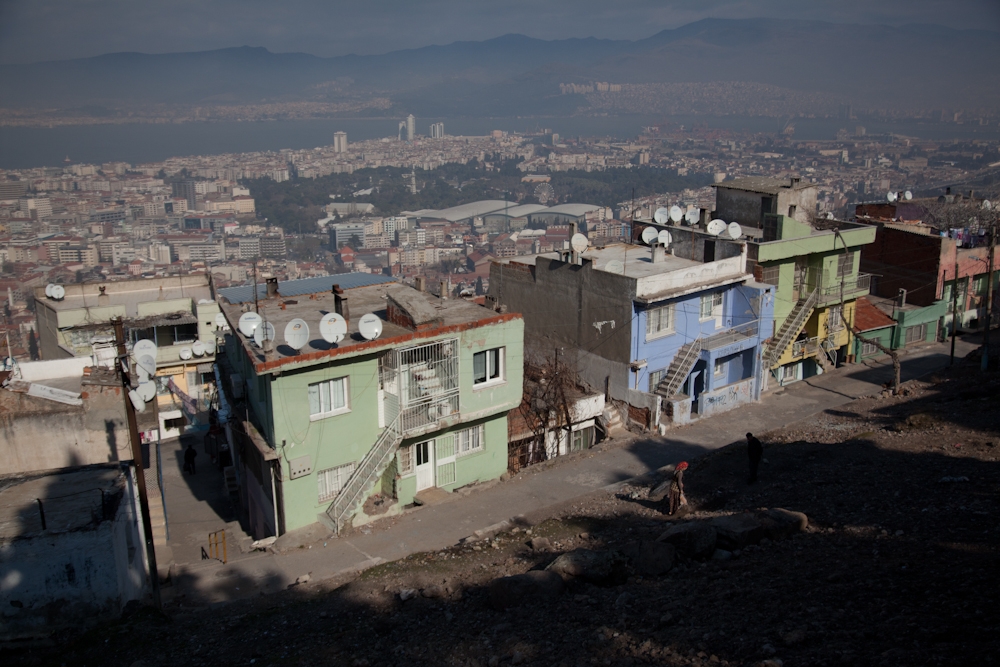 Some homes in Kadifekale remain untouched sitting on a hill overlooking the coastline of Izmir. 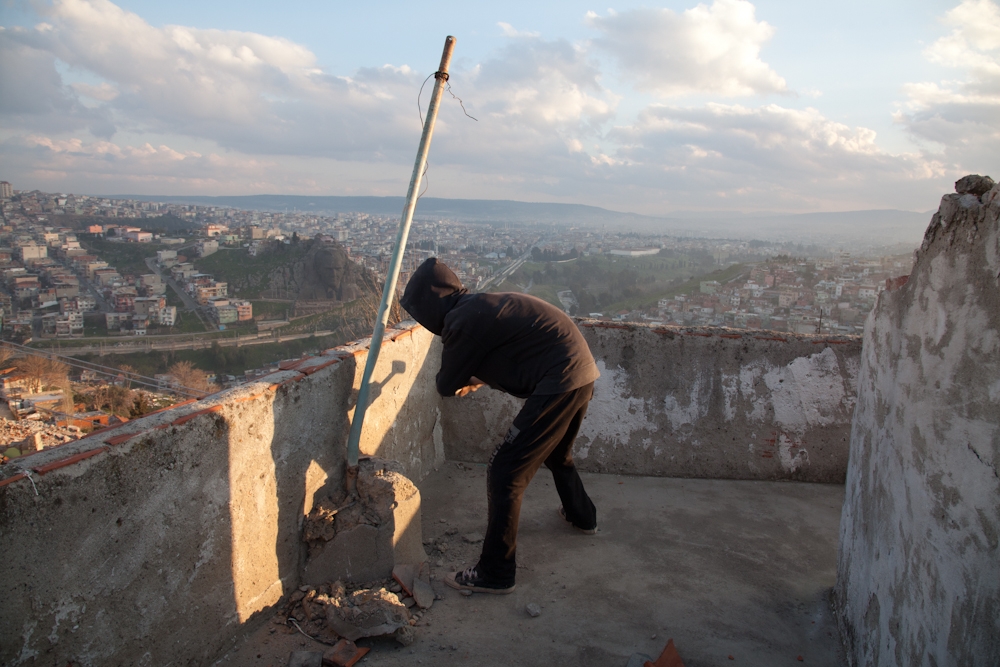 A young boy has paid the owners 50TL so that he may salvage as much scrap as he can before it is bulldozed. 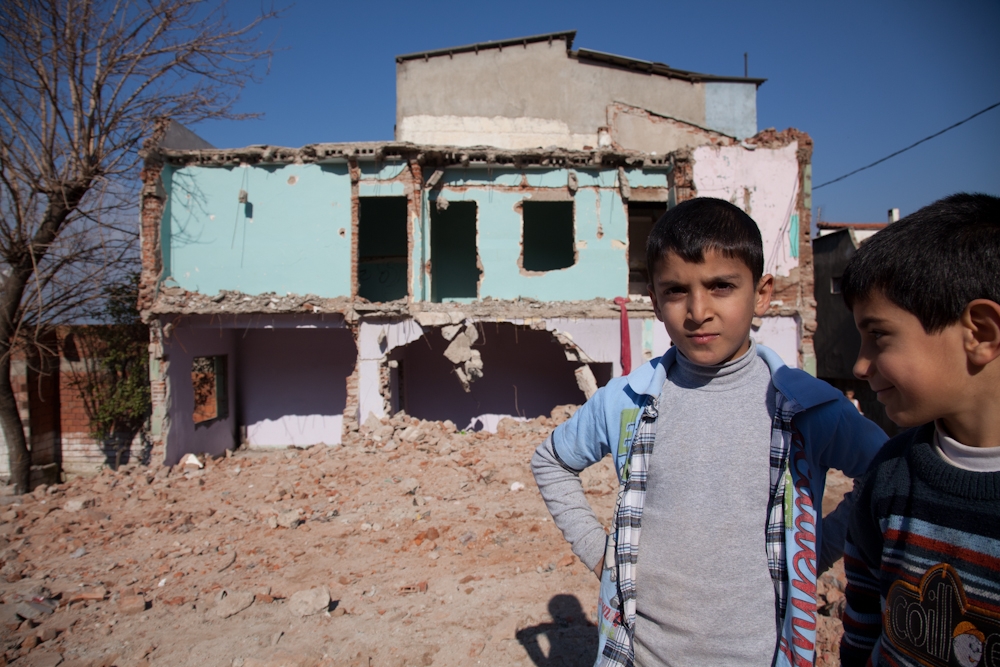 Boys play in the rubble of what was once their home. 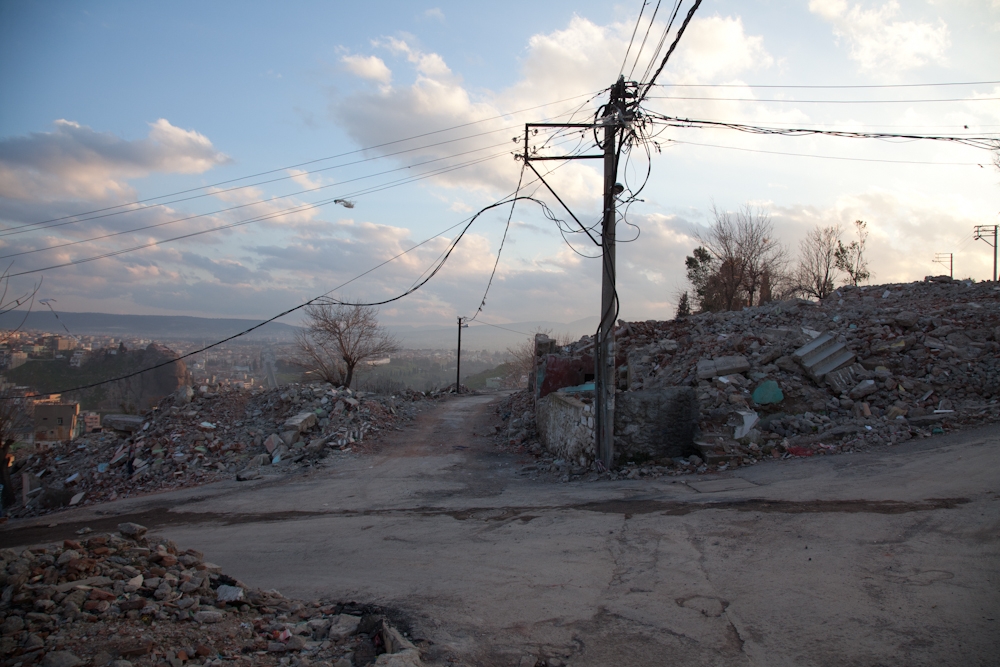 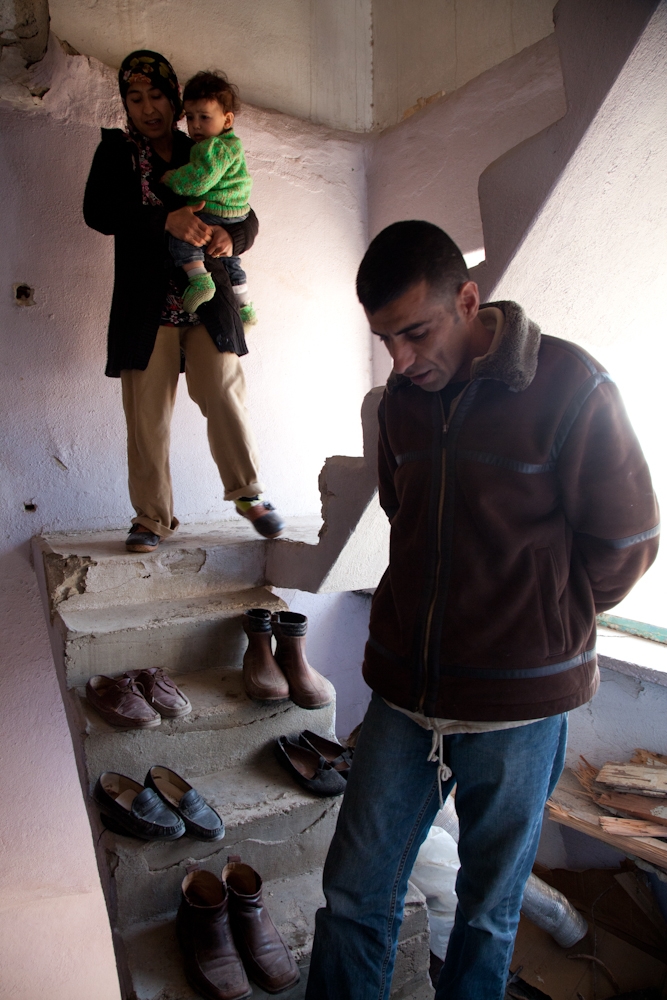 Ibrahim Daghan, his wife and son have already removed their windows and are preparing to move out of their home. 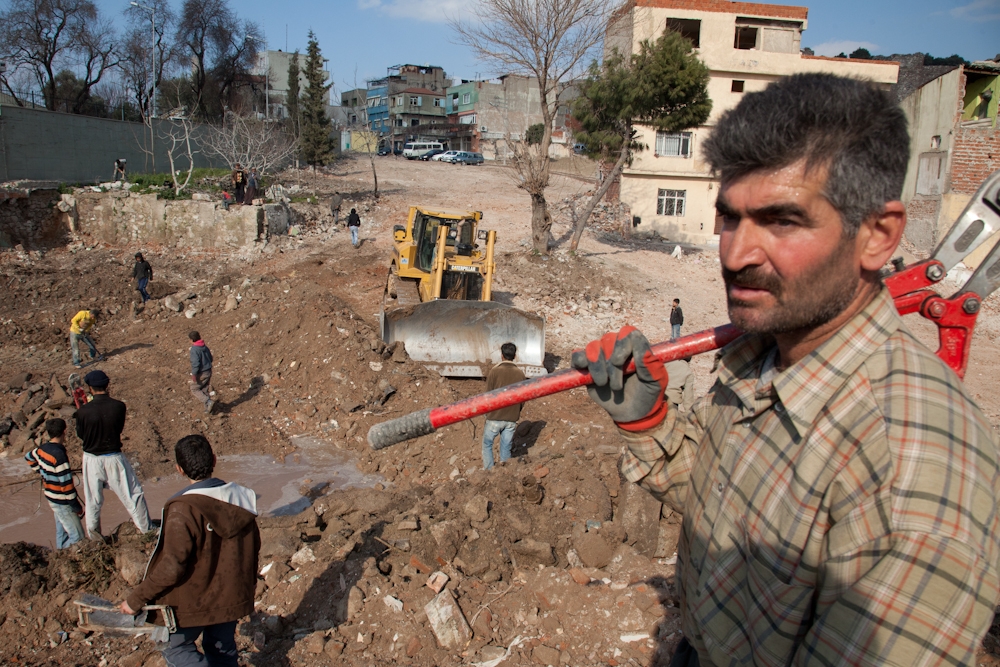 While bulldozers knock down homes, residents race to gather what bits and pieces of scrap that they can. 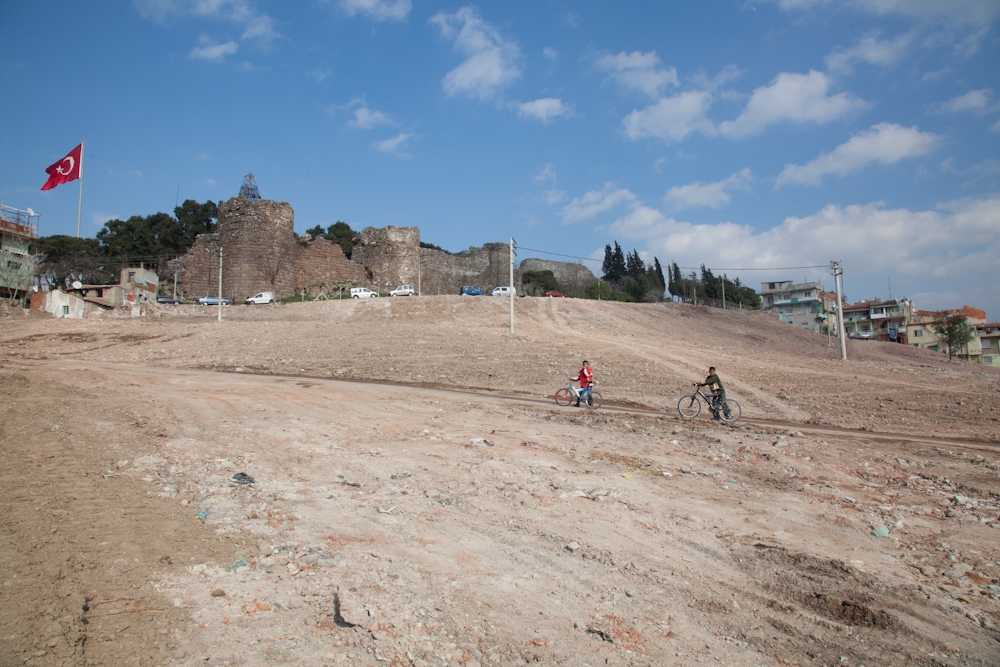 The land directly below Izmir Castle has been cleared to make way for a "green space" for picnicking. 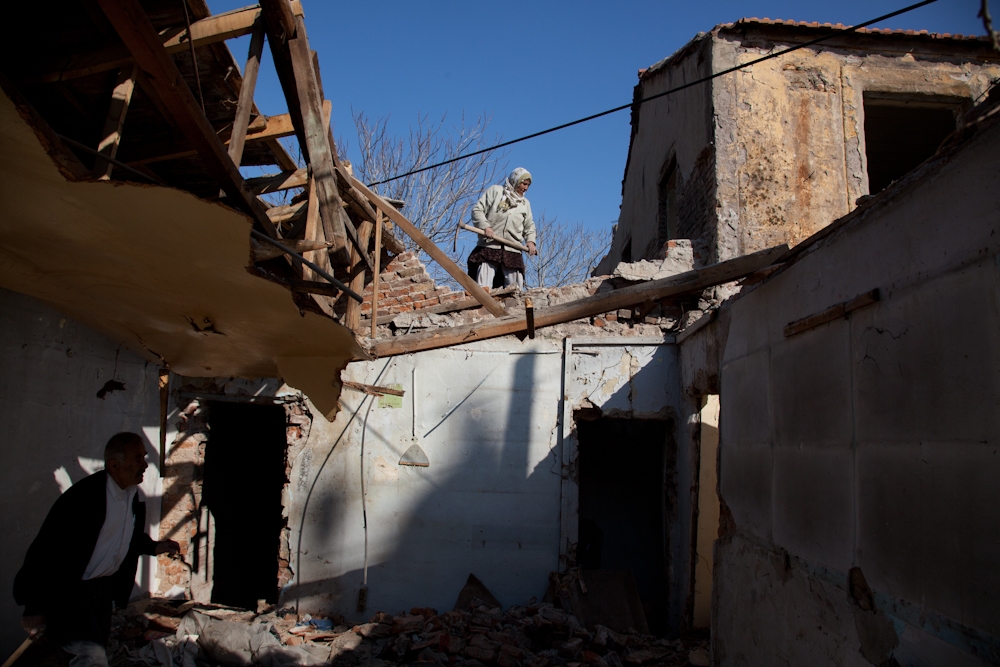 Owners frequently salvage what they can from their own previous homes to resell as scrap. 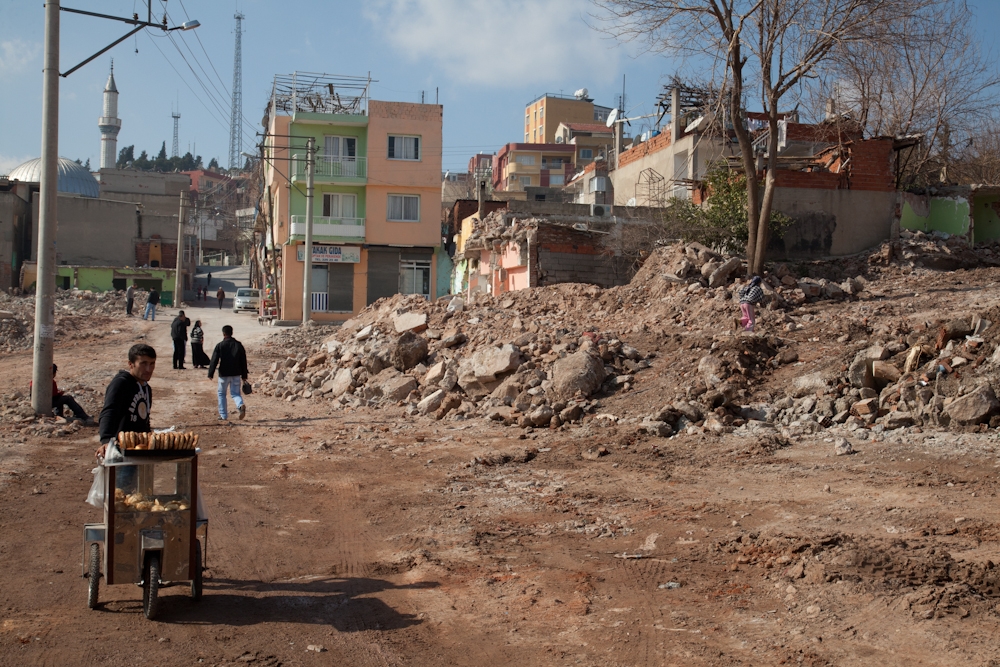 The bread-roll man cycles through the debris while people gather material from a recently leveled house. 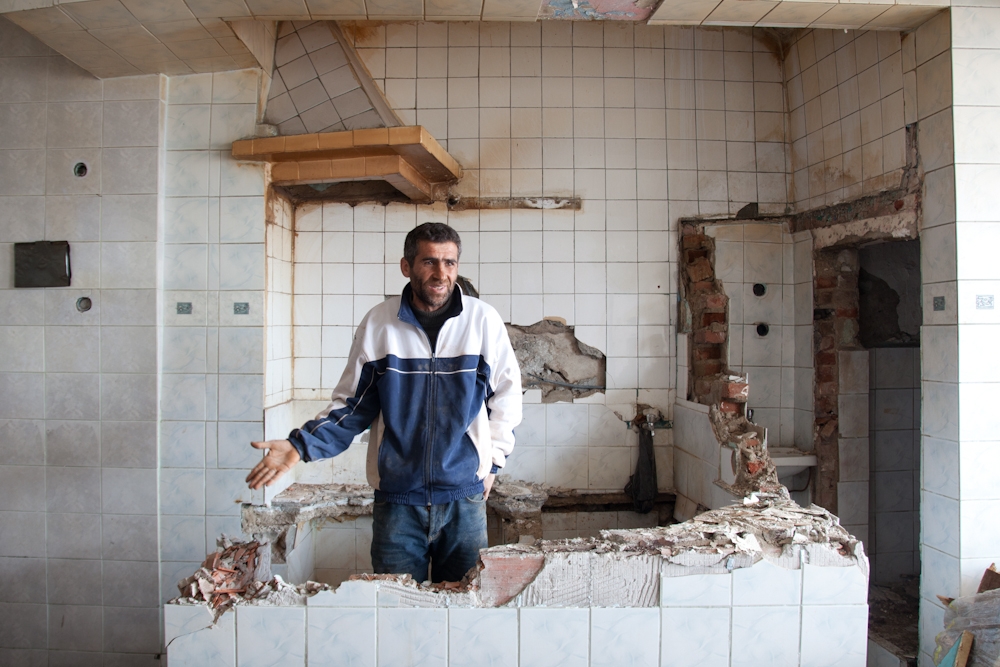 Former teashop owner Ahmet Bulut is furious at the loss of his home and business of 20 years. 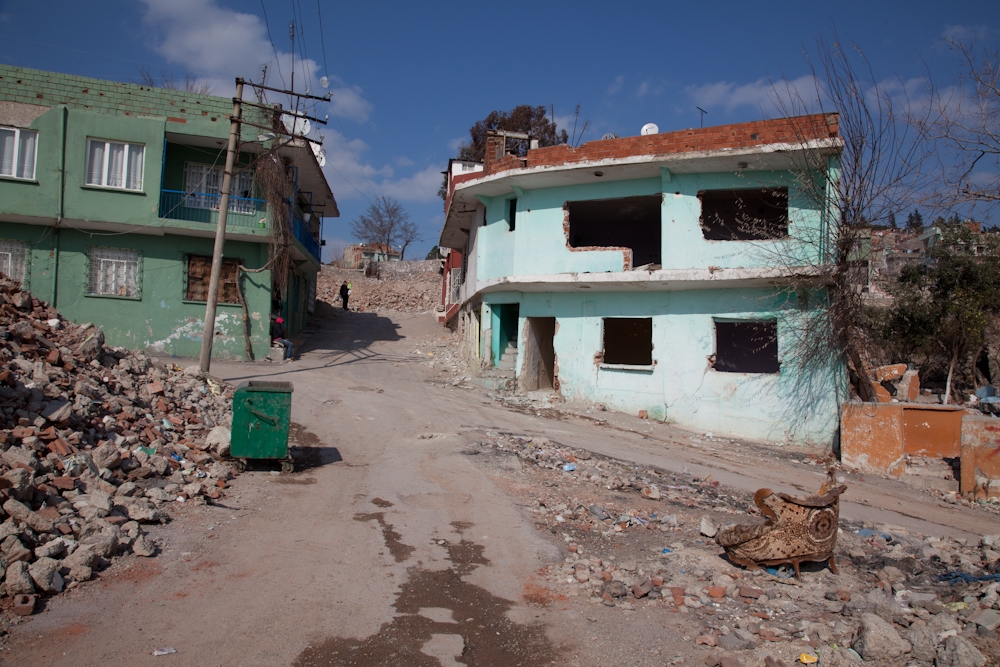 Nicknamed ”Little Mardin,” Kadifekale is mainly home to Kurdish migrants who started moving to Izmir in the 1960s. 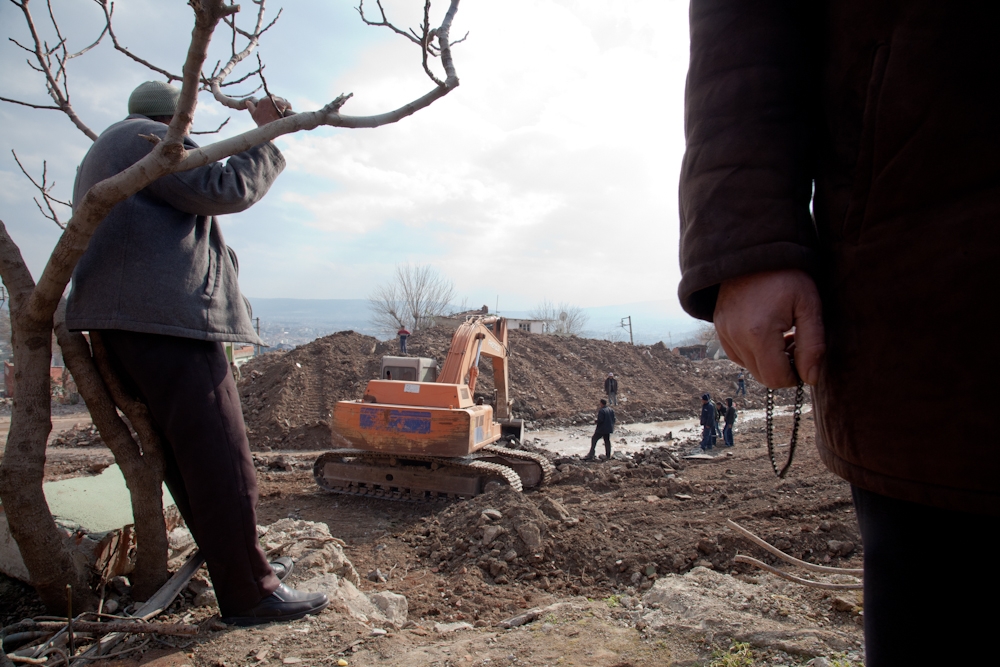 Old men watch a backhoe flatten one of the several hundred homes in Kadifekale.
prev
next

Water and electricity have been cut off, and the top three stories of her four-story home have already been demolished. But with nowhere else to go, Fatma Yildiz is trying to retain a semblance of a normal existence amid the rubble. For her and hundreds like her in Izmir, a city on Turkey’s Aegean Sea coast, urban renewal is synonymous with dislocation and a gloomy future.

“We don’t know what to do,” said the 31-year-old Kurdish mother of five. “My husband doesn’t work and we don’t have the means to move. ... We won’t be able to rent a house because it’s too crowded. We can’t find any other place.”

Their home is one of thousands in Izmir’s Kadifekale district being knocked down as part of an urban renewal scheme. Recently the family was forced to accept 40,000 Turkish Lira ($25,000) for the home that Fatma’s father built when they moved to the neighborhood 25 years ago from Mardin in the southeast. The money was not nearly enough to afford one of the apartments set aside for displaced residents in a new complex nearby, and they fear homelessness awaits them when the bulldozers finally demolish what remains of the house.

The demolition is part of a raft of urban renewal schemes in Turkey’s big cities that critics claim are driving some of Turkish society’s hardest-pressed segments further into poverty, while providing huge profits for municipalities and developers.

Most renewal projects are taking place in poor neighborhoods of Ankara and Istanbul, where ramshackle homes lie on what has become prime real estate. Among the most widely opposed initiatives is the ongoing demolition of Istanbul’s Sulukule district, home to a Roma community since Byzantine times. It is being replaced with luxury villas, while former residents are shunted to the fringes of the city.

“There hasn’t been any effective consultation process [in the urban renewal schemes],” said Andrew Gardner, a Turkey-based researcher for Amnesty International. “People facing forced eviction are not just at risk of losing their homes, but losing their livelihoods and being forced further into poverty.”

The projects have generated accusations that the country’s housing administration, known by its Turkish acronym TOKI, is disregarding basic human rights. “[The government is] giving unbelievable rights to TOKI and municipal mayors,” said Umit Ozcan, general secretary of Turkey’s Chamber of Urban Planners, an organization has is mounting a legal challenge against amendments to the planning law introduced last year to extend TOKI’s powers.

“This new law is giving unlimited scope to TOKI to take property from people without caring what happens to them. This is violating the right to property,” Ozcan said. “Nothing illegal is going on here, everything is within regulations,” said one anxious official when a EurasiaNet.org reporter visited Izmir’s Kadifekale district. Roughly 1,400 of the neighborhood’s 2,000 homes have already been demolished.

Nicknamed ”Little Mardin,” Kadifekale is mainly home to Kurdish migrants who started moving to Izmir in the 1960s. Many arrived in the 1990s after their home villages suffered damage amid the conflict between the Turkish army and militants aligned with the separatist Kurdistan Workers’ Party.

“When I moved here 45 years ago it was just farmland,” said Hasan, 70. “There were villages being destroyed in the east. People just rushed here and built houses, some built illegally because it was state property.”

Since that time, most have gained a legitimate title to the land. Some believe their neighborhood is being targeted for demolition because of their ethnicity. “We’re Kurds,” said Mehmet Aktog, who now has to rent a dwelling after receiving a payment of just 24,000 Turkish Lira ($15,000) for his home. “The main reason behind this is to separate Kurdish people from each other. They want to distribute us to other parts of the city.”

His view is shared by Amnesty International’s Gardner, who said many of the communities targeted are minorities viewed as problematic or undesirable by the state. “The people who face eviction are among the most vulnerable in society:  Kurdish IDPs [internally displace people], Roma groups and transgender women,” he told EurasiaNet.org. “What we’re most concerned about is that these people are facing forced eviction not despite the fact that they are the most vulnerable and discriminated against, but precisely because of it.”

The justification for urban renewal for many neighborhoods, including Kadifekale, is that the existing structures are vulnerable to earthquakes or landslides. While acknowledging that Turkey desperately needs to improve its vast substandard housing stock, Ozcan believes the earthquake risk rationale is, in many cases, being used as a cover for lucrative gentrification schemes.

“They are not using urban renewal to defend against natural disasters, they are only doing it for the very valuable lands in the cities,” Ozcan said.

Few residents in Kadifekale, with its stunning views over Izmir and cool breeze in the summer, believe the neighborhood will remain a park for long. “They want to make this a neighborhood for rich people,” said 18-year-old Nezir. “At the moment poor people live here happily.  They want to move us far away to somewhere where we’ll probably be unhappy and unsuccessful.”