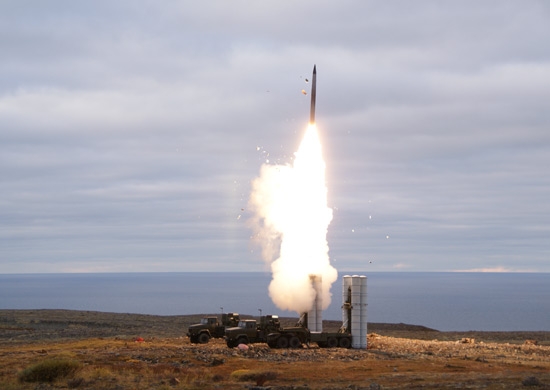 Turkey has reached agreements with both a Russian company and a European consortium to buy air defense systems, without explaining how it plans to carry out both acquisitions -- seemingly mutually exclusive -- at the same time.

On July 13, Bloomberg reported, citing unnamed officials, that Turkey had agreed to pay $2.5 billion for Russia's S-400 air defense system, and that two batteries would be delivered within the next year and two more produced in Turkey. The deal, Bloomberg wrote, "signals a turn away from the NATO military alliance that has anchored Turkey to the West for more than six decades."

But then the very next day Turkish Defense Minister Fikri Işık made another announcement: "I am happy to announce that this afternoon Turkey has signed a cooperation agreement with Italian-French consortium Eurosam to produce missile defense systems," he said at a Bastille Day reception at the French embassy in Ankara.

This is the latest twist in the saga, increasingly resembling a Turkish soap opera, of Ankara's quest to find true love in the form of surface-to-air missiles. There was a long courtship by American, European, Russian, and Chinese suitors, and then the shock announcement in 2013 that Turkey would opt not for the safe, steady NATO partner but the exotic Chinese bad boy. That engagement, though, fell apart and Turkey said it would never love again and that it would build its own air defense system by itself. But that self-imposed solitude didn't last long, and Turkey seemed to be open to advances from the other, really bad boy: Russia.

Now Ankara has, to strain this metaphor perhaps to the breaking point, simultaneously announced engagements to both Russia and Europe. So what's actually going on?

No Turkish official has yet explained the relationship between the two deals. And it seems unlikely that Turkey would buy both systems, mainly for cost reasons. The original deal with China was for $3 billion, and so if Ankara were (hypothetically) spending the same amount of money, they wouldn't have much left after spending $2.5 billion for the S-400. And Turkey's economic situation has gotten substantially worse since 2013.

The anonymous Turkish official told Bloomberg that one selling point of the Russian system is that it wouldn't be subject to the same set of constraints that NATO would place on Turkey, "which prevents Turkey from deploying such systems on the Armenian border, Aegean coast or Greek border, the official said. The Russian deal would allow Turkey to deploy the missile defense systems anywhere in the country." That's a curious explanation -- it's not clear why Turkey would need to deploy advanced air defense systems against Greece, as tensions between Athens and Ankara are as low as they've been in decades. And on the Armenian border the only threat is... Russia.

Another selling point that the official noted was that Russia would transfer some of the technology to Turkey, which has been one of Ankara's most consistent requirements. But the European deal would also allow for joint production, though we don't know enough about the preliminary deals to compare the respective amounts of technology the Russians and Europeans would be willing to share. And buying a NATO-compatible system would allow Turkey to integrate that system into NATO's larger air defense network.

An insightful analysis from the blog TR Defence suggests various layers of games that could be underway here. Russia could be dangling the possibility of the S-400 in front of Ankara, in order to gain Ankara's cooperation on other issues and to give the appearance of a big geopolitical win, without actually intending to go through with the deal. Or it could be a tactical deal between Ankara and Moscow, less significant that it is meant to appear. Or it could be the cornerstone of a genuinely strategic partnership. Or it could be a bargaining chip for Turkey to get Europe and NATO to take its defense needs more seriously. (This last was the prevailing explanation in NATO circles for the Chinese deal.)

"The most important, most sensitive issue in arms trade is the sale of military-aviation complexes, that is fighter jets and long-range air defense systems," Konstantin Makienko, the deputy director of the Moscow defense think tank Center for Analysis of Strategies and Technologies, in an interview with Russian newspaper Vzglyad. "If the Turks really buy this air defense system it would be a tectonic shift, a revolutionary event in the arms market."

But he emphasized that we shouldn't jump to such conclusions just yet: "As long as the contract hasn't been concluded, let alone implemented, we can't be confident of it."