Turkey: Where Will the Protest Movement Go? 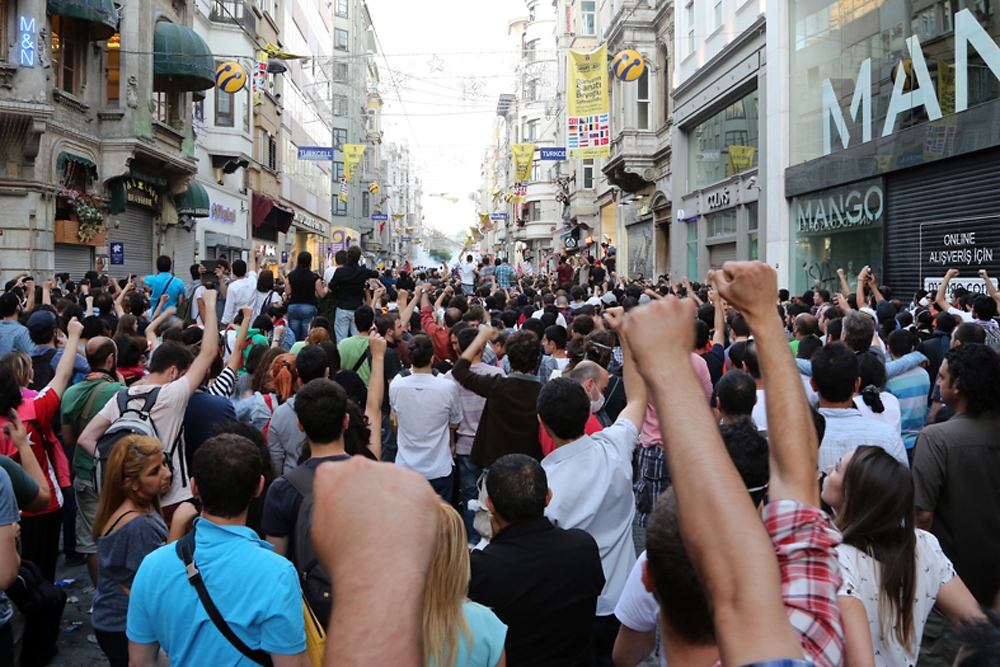 A rally against the destruction of a park in central Istanbul quickly grew into nationwide anti-government protests. (Photo: Jonathan Lewis)

The mass protests that have swept Turkey in recent days seem to have a quicksand quality for Prime Minister Recep Tayyip Erdoğan: the more he moves to quash dissenting views, the more entangled he appears to be getting.

Trouble began on May 31 and was initially a response to a city government attempt to demolish Gezi Park, one of the last green spaces in the center of Istanbul, near Taksim Square. When police employed strong-arm tactics – including the widespread use of tear gas and water cannons – against the park activists, the protest quickly adopted an anti-government tone. The first confirmed protest-related death occurred June 3, when a taxi plowed into a crowd of demonstrators on a downtown thoroughfare.

Sympathy protests have hit some 66 other towns and cities, ranging from secular, Western-looking towns on the Aegean Sea coast to more conservative, religious cities in the predominantly Kurdish southeast.

The driving force behind the protests is long, pent-up frustration about Erdoğan’s governing style: many secular-oriented Turks contend that the Islamist-leaning Justice and Development Party (AKP) government ignores public sentiment on issues ranging from property development and media rights to the role of religion and access to alcohol. Over the past few days, public ire has focused on Erdoğan, with critics lambasting him for acting like an Ottoman-era sultan. So far, hundreds of citizens have been arrested in connection with the protests, according to official data, and scores have been injured.

Erdoğan has poured plenty of gas on Turkey’s fire with provocative comments that appear to support his critics’ contention that he is operating in his own bubble world. One June 3, for example, he claimed at a news conference that the Istanbul protests were “organized by extremist elements” that lacked significant public support.

"We will not give away anything to those who live arm in arm with terrorism," the prime minister added. Earlier, Erdoğan blamed the trouble on a “few looters” and dismissed the notion that he’s governing like an autocrat. He also has derided social media networks, especially Twitter, as “a scourge.”

The prime minister’s steadfastness in denying the legitimacy of his critics’ grievances may well just raise the country’s political temperature, personalizing the confrontation in a way that makes it more difficult to defuse.

As it stands, the coalition of Erdoğan critics – the backbone of which appears to be better-educated, middle class Turks with rising expectations about the protection of individual rights and the accountability of political leaders – shows no signs of backing down. And the more oblivious to their concerns the prime minister seems to be, the more determined they become.

"We don't want this government. They want us to go. They sprayed pepper gas in our eyes,” complained one Istanbul woman, wearing a surgical mask to protect herself from tear gas; her eyes red from earlier exposure to the chemicals.

In two instances in recent days, demonstrators have targeted outposts of the prime minister’s power itself; setting fire to his Justice and Development Party (AKP) office in Izmir, Turkey’s third-largest metropolitan area, and, in Beşiktaş, trying to reach Erdoğan’s own office.

Meanwhile in Istanbul, banners have appeared at protests calling on Erdoğan to resign. “Whatever happens, there is no going back," one banner declared.

Henri Barkey, a Turkey expert at Lehigh University in Pennsylvania, questioned whether the government had an accurate gauge on the social, political and economic dynamics at work, at least in Istanbul. "I don't think [authorities] expected there would be such a gut reaction to this, that people are really angry," Barkey said.

Although opposition to Erdoğan seems to be stiffening, where the protest movement goes from here is difficult to predict. In many democracies, citizens would look to an alternative political party to step forward and lead the opposition movement and guide the debate. But that does not seem to be the case in Turkey, where the main opposition party, the Republican People's Party (CHP), the former Kemalist ruling party, is widely discredited and considered dysfunctional.

"I think people do not want a CHP-led mobilization," admitted Aykan Erdemir, a CHP parliamentarian from the western city of Bursa. After criticism on social media, the CHP canceled a rally in Istanbul's Kadikoy neighborhood in support of the park protesters, he added.

Erdoğan continues to struggle to find a way to cap the gusher of public opposition to his policies. On June 2, he stepped back from plans to build a shopping center in a restored, Ottoman-era barracks on the site of Gezi Park. But then he reaffirmed plans to build a mosque in the area.

Barkey believes that could be an attempt to change the narrative, though with some risk. "I think [Erdoğan] is going to have an even bigger fight on his hands if he builds a mosque," he said.

With both presidential and local elections approaching in 2014, Erdoğan is playing a high-stakes game. For now, he appears to be focused on rallying his religiously conservative supporters in Turkey's Anatolian heartland by insisting on building the mosque and lashing out at the largely secular demonstrators.

Ahmet Insel, a professor of economics and political science at Istanbul's Galatasaray University, believes that the backlash against the prime minister could become the “center of the debate” in Istanbul’s elections next year. "Probably this is a turning point for forming a large coalition that is anti-AKP at the municipal level, for the local elections,” said Insel, who is also involved with the organizers of the initial Gezi Park protests.

For their part, Istanbul demonstrators seem prepared for a long-haul contest. A 19-year-old student named Elif said that the protests made her friends and her more conscious of wanting "to do something" in the face of Erdoğan's unchecked rule.