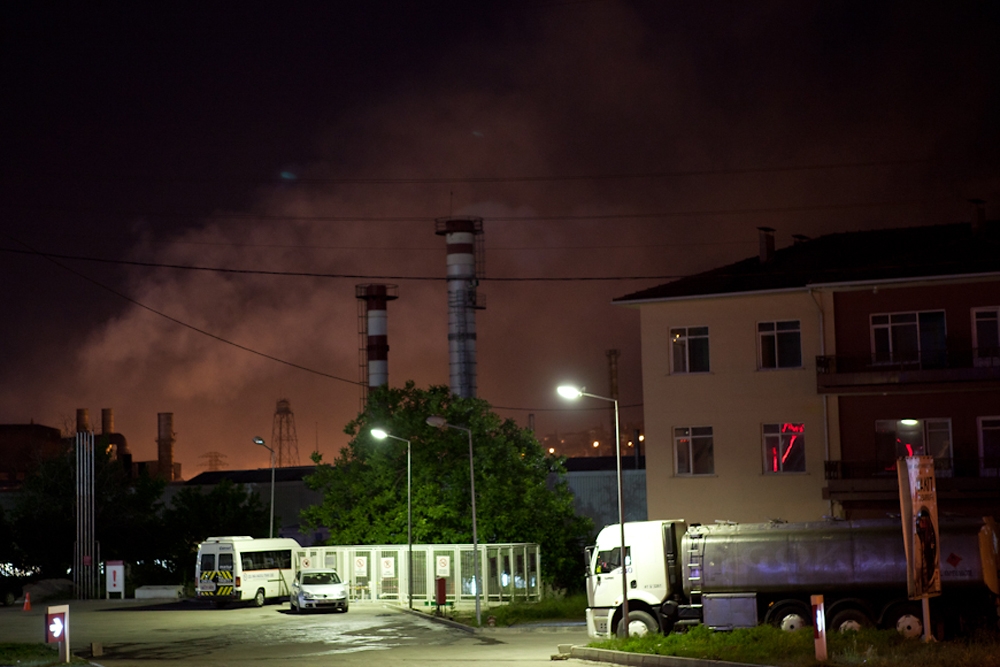 Dilovasi residents claim the factories release most of their pollutant waste in the middle of the night. 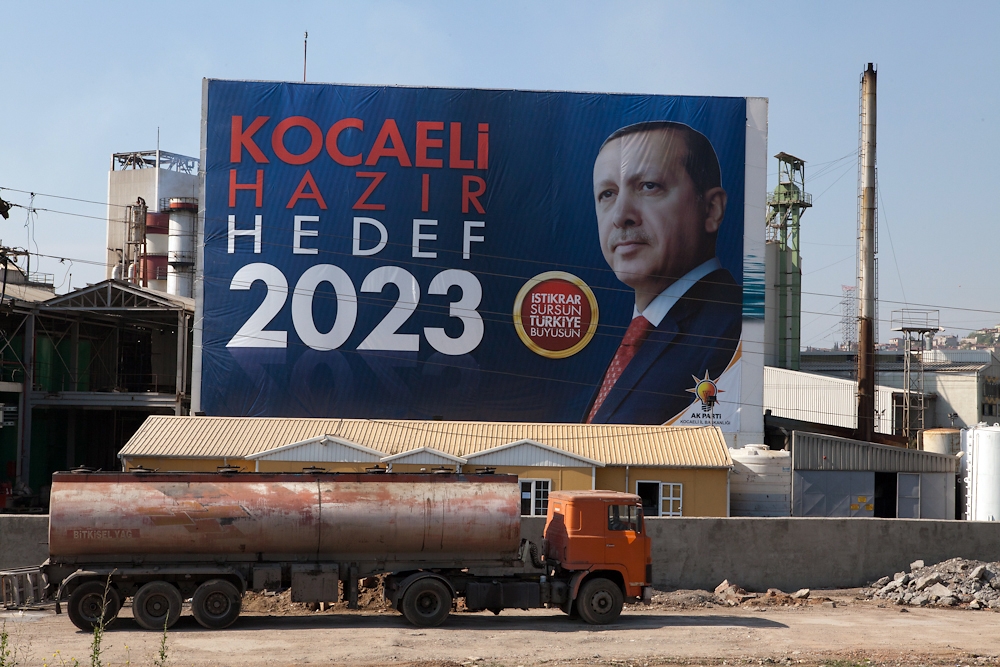 A sign from the ruling AK Party says “Kocaeli is ready for 2023," highlighting the policy on industrial and economic expansion. 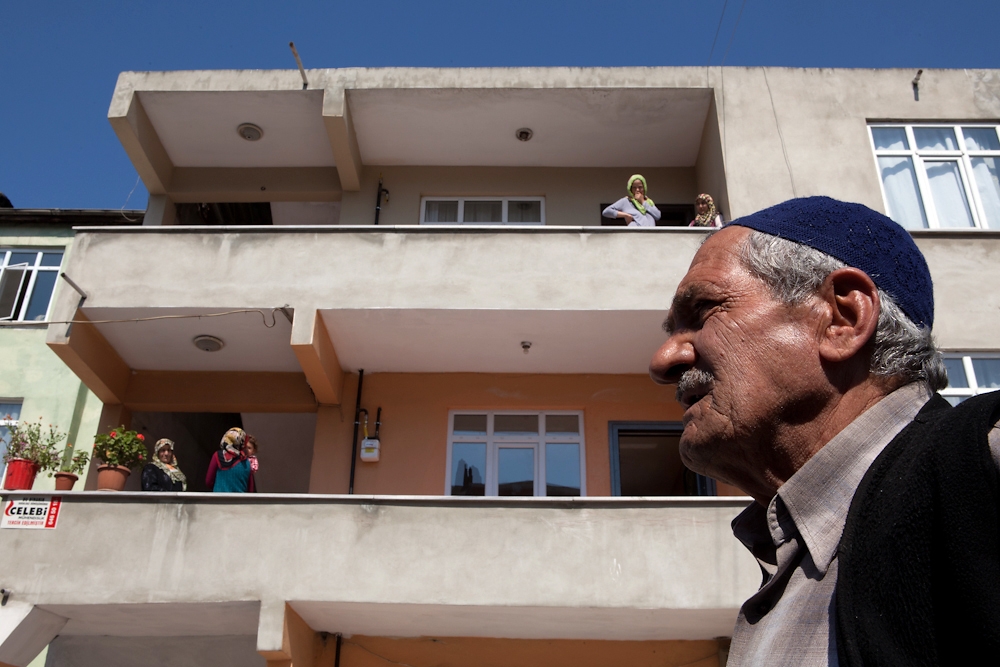 "There is nothing but cancer, earthquakes, and dirt -- that's all we have," says retired metalworker Tahsin Karadag. 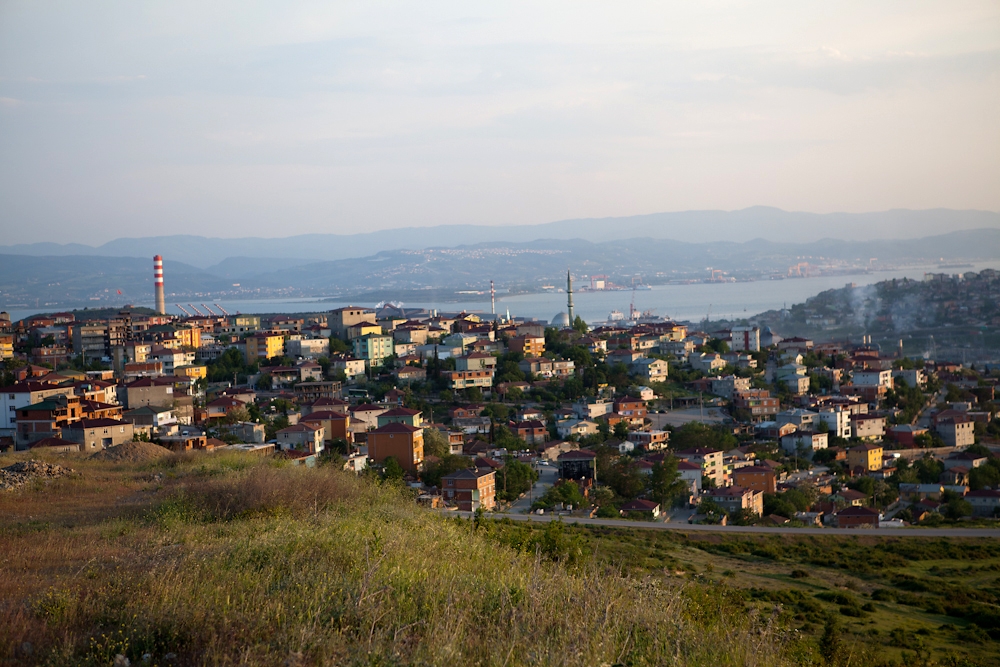 Several new factories have opened in Dilovasi during the past few years, despite a 2007 commission asking to stop more growth. 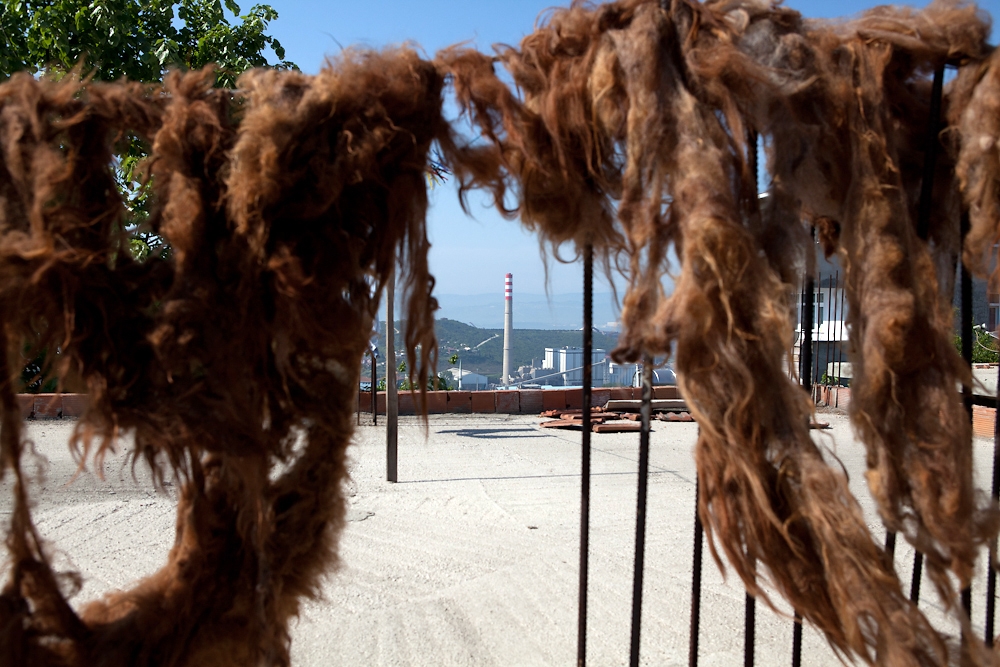 Washed wool dries outside in air that often fouls clean clothes because of the pollution. 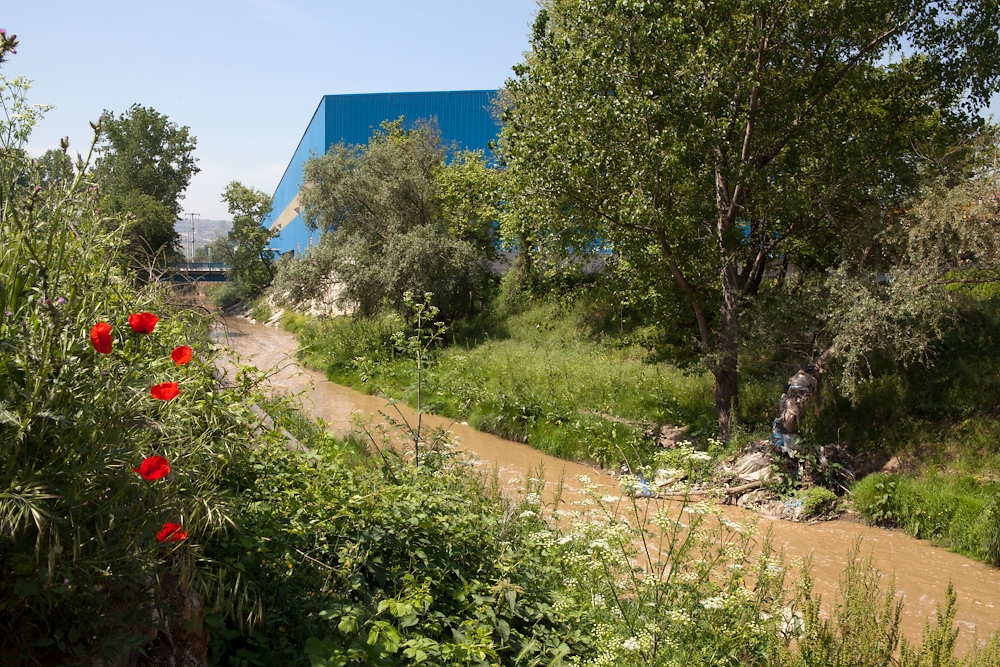 Local factories dump their effluent into rivers, which in turn run into the Sea of Marmara, southeast of Istanbul. 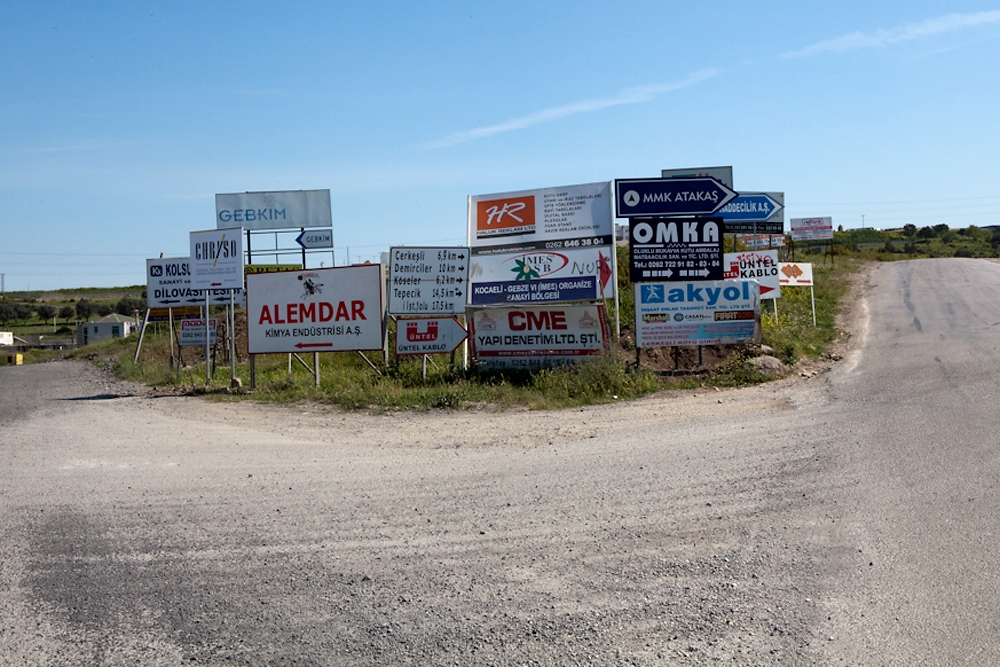 Billboards and signs advertise the many factories - large and small - operating in Dilovasi. 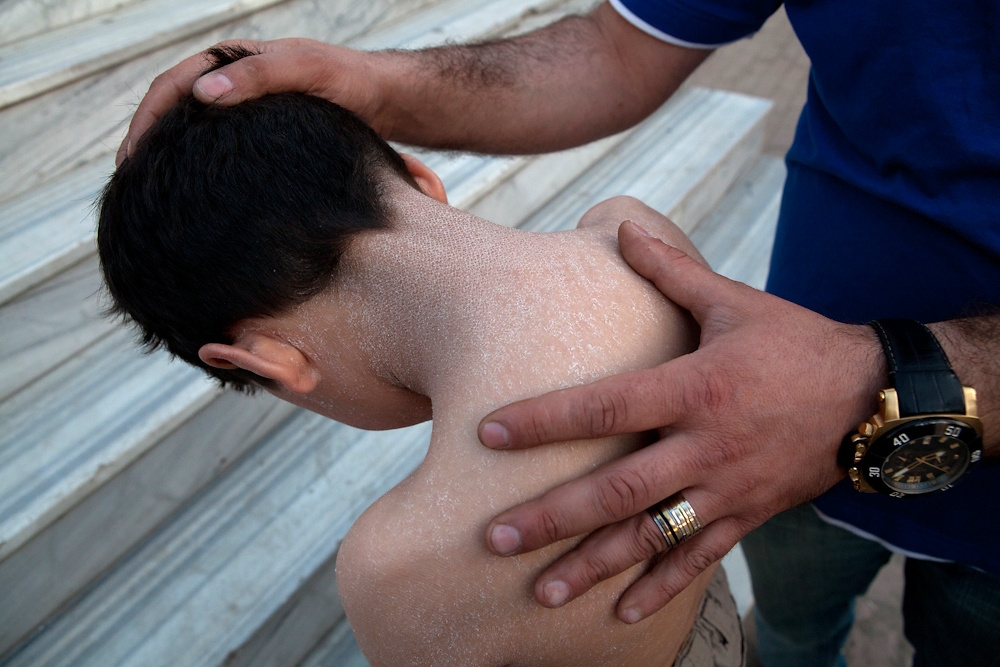 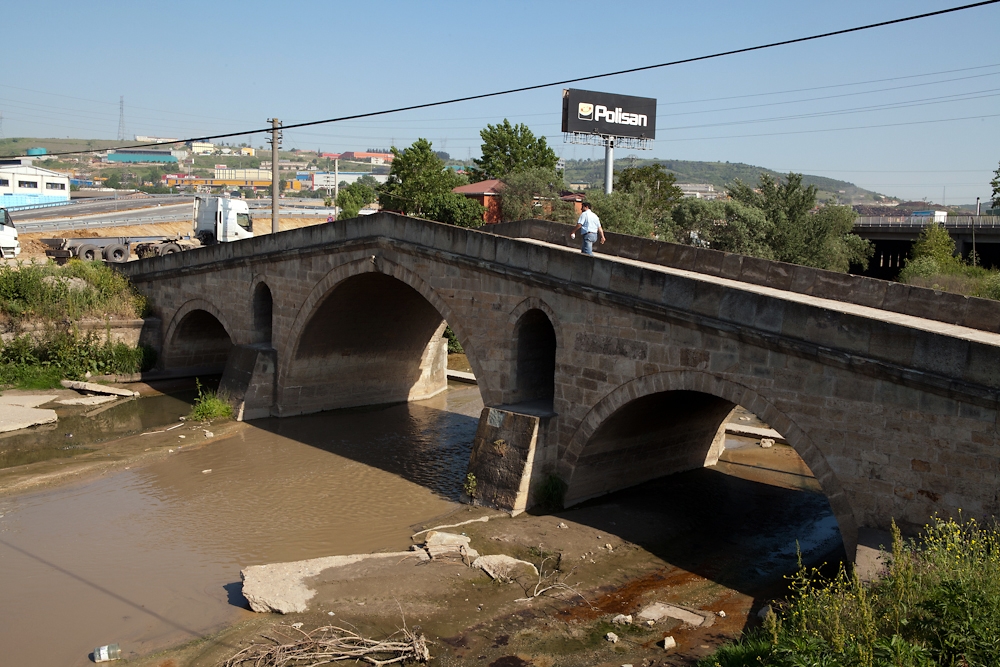 The Tahrih Kemer Bridge crosses the river through Dilovasi that once provided all the drinking water.
prev
next

Telephone engineer Yilmaz Hakal remembers as a child catching fish as big as his forearm from the river running through Dilovasi, a town on the Asian coast of the Sea of Marmara. But these days, not much flows under the arches of its fine Ottoman bridge apart from garbage, rafts of white foam and the toxic runoff from factories.

The community of around 45,000 hosts more than 150 industrial firms -- mainly polluting, heavy industries, including paint and petrochemical manufacturers. There are also smelters that handle scrap metal from ships and military equipment. “There is nothing here but cancer, earthquakes, and dirt -- that’s all we have,” said Tahsin Karadag, a 66-year-old retired metalworker who has lived in the town for more than 25 years.

What distinguishes Dilovasi from countless other industrial wastelands is local authorities’ apparent efforts to suppress a report about the devastating health consequences of industrial emissions. Earlier this year, research conducted by Professor Onur Hamzaoglu of nearby Kocaeli University revealed that traces of poisonous elements and heavy metals in the smog that often cloaks the town have made their way into the breast milk of local mothers and are present in infants’ feces.

The academic released that finding in January and now finds himself the target of a university investigation that could lead to criminal prosecution and a four-year jail term. Dilovasi Mayor Cemil Yaman, along with Ibrahim Karaosmanoglu, mayor of the nearby city of Kocaeli, filed a complaint against Hamzaoglu’s findings. The mayors, both members of the governing Justice and Development Party, told prosecutors that the professor, who chairs Kocaeli’s Public Health Department, exaggerated his findings “to stir up chaos and panic.” The investigation is proceeding as Turkey enters the home stretch of a parliamentary election campaign. Both Yaman and Karaosmanoglu did not respond EurasiaNet.org efforts to arrange interviews.

Hamzaoglu began his research in 2004 after local health authorities noticed that cancer outranked heart disease as Dilovasi’s number-one killer. The professor discovered a cancer rate more than two-and-a-half times higher than the average in Turkey; in 2006, he presented his research to the Turkish parliament, which set up a commission to investigate the problem.

The following year, the commission’s report called for an end to industrial expansion around Dilovasi. Such a recommendation met with silence from the government, which views Turkey’s robust economic growth as one of the party’s top achievements while in power.

Since 2006 more factories have opened in Dilovasi, and the town’s two steel re-smelting plants have expanded capacity. Plans for a coal-fired power station have been tabled, but nearby, another steelworks is under construction. “The situation is very, very serious,” Hamzaoglu told EurasiaNet.org. “It is not only cancer. There are high levels of asthma and respiratory diseases, and there are many birth defects, both in humans and animals.”

In Dilovasi itself, the air is acrid with dust and has a metallic scent similar to that created by screeching car brakes. Residents say they cannot hang their clothes out to dry -- otherwise they become dirtied by soot. They also claim the bulk of factories release their fumes at night when smog cannot be seen.

The Cakans are among the many families that have experienced the devastating effects of the toxic surroundings. Nine-year-old Diyar Cakan was born with partially missing fingers on his left hand and a rare skin disease called ichthyosis. His scaled, itching skin needs to be rubbed with cream several times a day and burns badly under direct sunlight. Doctors have told the family his condition is likely the result of environmental pollution.

“The previous mayor told us they would pay his medical bills if we didn’t go to the press, but we did anyway,” said the boy’s 35-year-old father, Cem, a long-distance truck driver. “I have never stopped fighting against this injustice.”

Other residents who spoke to EurasiaNet.org claimed the town’s heavy industry has brought few benefits. Some said the general poverty and low levels of education mean many factories prefer to bring workers from outside since they believe such employees are less likely to steal. “They’re bringing people from other places to work here,” said Burhan, 31, a bus driver. “We get the poison and they get the money.”

Development in Dilovasi began in the 1950s, as companies were attracted by the area’s proximity to Istanbul and good road and port links. The residents, mainly Kurds from the east seeking employment, built shanty neighborhoods that became recognized as a town in 1985.

Many residents simply name “money” as the reason why their elected officials appear determined to ignore the reported impact of pollutants on the town. “If politics were clean, our air would be clean,” said Cem Cakar.

The outcome of the university investigation into Harnzaoglu’s research will determine whether criminal charges are brought against him. Colleagues have gathered roughly 5,000 signatures calling for the investigation to be dropped. Meanwhile, Harnzaoglu has filed a defamation case against Kocaeli Mayor Karaosmanoglu, who the professor alleges called him a “charlatan” and a “liar.”

While Kocaeli University administrators have not publicly supported Hamzaoglu, the professor nevertheless plans to release his final report next month. At the very least, he notes, the controversy has focused attention on Dilovasi’s environmental situation. “They [town residents] will no longer get sick in silence,” Hamzaoglu said. “Their deaths will be heard and Turkey and the world will know that the factories and factory owners are only on the path of making money. All the problems we found have solutions.”