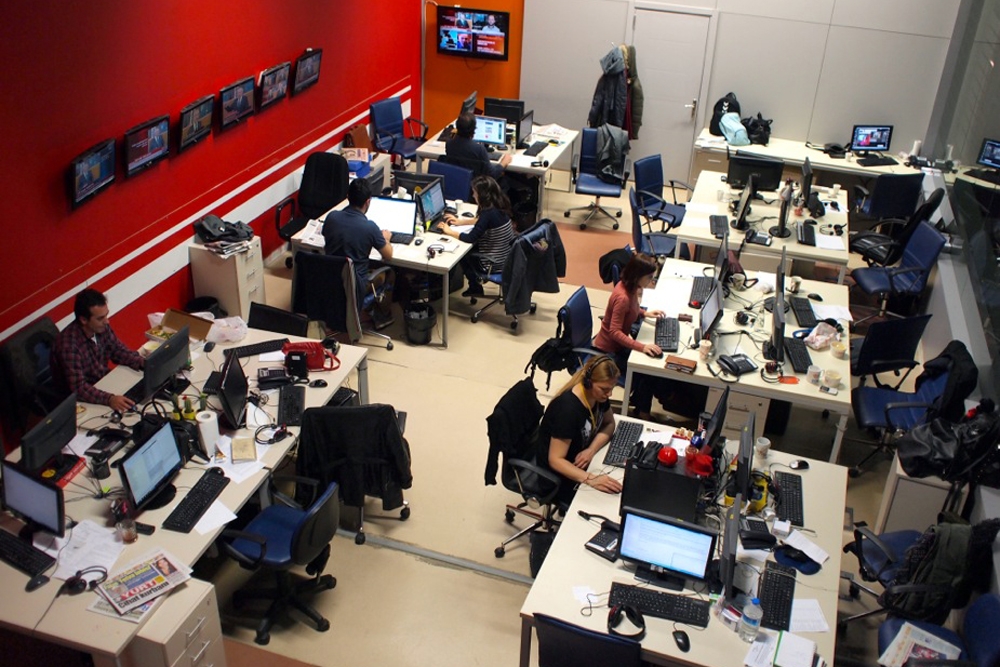 After working as a respected journalist for 25 years in numerous capacities, including a stint as a columnist at one of Turkey’s largest newspapers, Serdar Akinan found himself in early 2013 at a career crossroads: would he continue working in the mainstream Turkish media or open up a pizza place?

It would be hard to blame Akinan for wanting to get out of his profession. Over the last few years, Turkey has become an increasingly unpleasant place for journalists, with columnists and reporters regularly getting fired for being too critical of the government. In Akinan’s case, he found himself out of work two years ago after being unceremoniously fired by Akşam, a major newspaper, for writing columns that he believes led to complaints from the office of Prime Minister Recep Tayyip Erdoğan.

After taking some time off, Akinan tried to find work in newspapers or magazines, but found that he had essentially been blacklisted. Seemingly unable to return to journalism, he was considering a move into the pizza business when a friend offered to give him financial support to launch his own news website, one that would ride on the strength of Akinan’s reputation and his 220,000 Twitter followers.

The result was Vagus.tv, fortuitously launched only a few days before last summer’s Gezi Park protests. Although it is struggling financially, the site has been able to quickly build a loyal audience, Akinan says. “I realized people needed news they can trust and they lost their trust in the big media,” he says, speaking in a small conference room of a shared office space in Istanbul’s waterfront Karaköy neighborhood.

Akinan’s story is an instructive one. As the mainstream Turkish media becomes increasingly muzzled by the government – or, more precisely, by owners worried about angering the government and jeopardizing other business interests they might have – and a glut of talented sacked journalists is flooding the market, a new space is emerging for plucky independent media ventures.

“In this media environment, it’s not about what resources you have, but what your attitude is,” said Doğan Akın, a veteran journalist and founder of T24, perhaps the most successful of Turkey’s new online news ventures. “With all the money they have, the big organizations can’t report on the news, while independent organizations might not have a lot of money, but we can report the news.”

“We wouldn’t be able to compete with the big media players unless the state of the media in Turkey is as it is,” added Akın, whose site has become a refuge for a number of well-respected writers who have recently been fired from their positions at other papers.

The state of the Turkish mainstream media certainly appears to be dire. Along with the axing of critical reporters, there is also the matter of Turkey being the world’s leading jailer of journalists (most of them Kurds, imprisoned under harsh terrorism laws). The media in Turkey has become so averse to crossing the government that on the first night that the Gezi protests became too large to ignore, the country’s leading networks did just that, with CNN Türk famously showing a documentary about penguins rather than the events taking place in the heart of Istanbul.

“Before the AKP government, it was normal for the army’s chief of staff to arrange meetings with journalists and editors, and issue orders on how things should be reported,” said Nadire Mater, who runs Bianet, a long-running independent media center that supports several projects, including news sites in Turkish and English. “Now Erdoğan is acting in a similar way to the generals. Here we refer to him as ‘editor-in-chief of the entire media.’ Power is power -- armed or unarmed. He wants a media that only adores him, without criticism.”

“The challenge is how to operate outside of this atmosphere,” she said.

For IMC TV, an upstart national television station launched in 2011, this means being funded by a sole benefactor, a Kurdish businessman who made his money in the shoe trade. This arrangement allows the channel to avoid having to deal with skittish advertisers. IMC, which could be described as the anti-penguin network, pays particularly close attention to minority issues, with a show in Armenian and, on staff, Turkey’s first transgender news reporter. The station also runs what might be one of the more unique programs anywhere: a debate show featuring a panel made up entirely of journalists who have been dismissed from their previous jobs for being too critical.

“The hardest thing in journalism now in Turkey is to define what is true and what is not, to get through the manipulation and report the truth. We are trying to do this as much as we can,” said the station’s news director, Aris Nalcı.

For now, the government seems to be keeping its hands off the emerging independent media outlets, preferring to focus instead on maintaining discipline within the outlets loyal to it. “What they intend on doing is controlling what they regard as the mainstream, and what they can’t allow is for the press that supports them to have doubts or create doubts in the minds of people. And they seem to be very successful in doing that,” said Andrew Finkel, a long-time foreign correspondent in Turkey who has also worked for several Turkish publications.

Still, he added, the Turkish media’s dismal performance during the Gezi events may have satisfied the government, but it also may have created an opening for a space in which new independent projects can thrive. “I see the space for independent media to exist in Turkey,” said Finkel, who is working with a group of Turkish journalists on creating a non-profit that will provide support for independent investigative reporting. “Every generation in Turkey has produced a press instrument that defines that generation. It seems to me that the next wave has to be internet-based, with an element of social media to it.”

The challenge now, says T24’s Akın, is not just filling the vacuum created by the failure of Turkey’s mainstream media, but filling it with quality journalism that avoids the bad habits of the past.

“Just because the big media is bad, it doesn’t automatically make us good. In order to be an alternative, we have to improve our professional standards,” he said. “If we can improve our standards, then we can institutionalize the development of an independent media in Turkey.”

Yigal Schleifer is a freelance journalist who specializes in Turkish affairs.