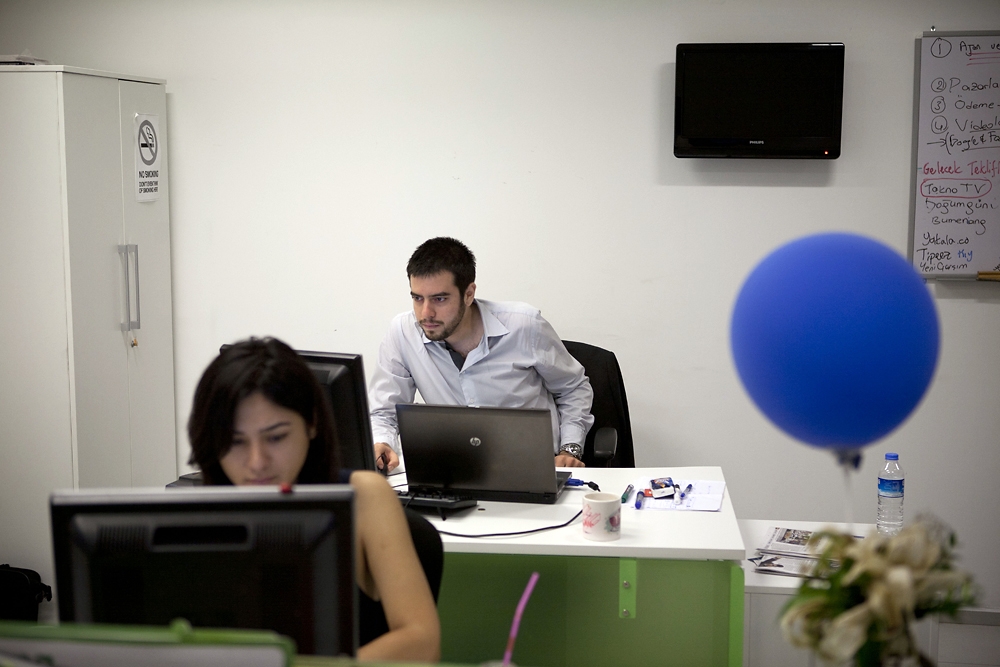 Onur Kabadayi is among the thousands of young Turks who have returned to Turkey recently to live and find work. (Photo: Justin Vela)

For decades, thousands of Turks immigrated to the West, in particular Germany, in search of work. Now Turkey’s economic prosperity has young Turks abroad looking homeward.

Over the past few years, Ayhan Kaya, an immigration specialist at Istanbul’s Bilgi University, put the annual return rate of young people with Turkish roots at between 8,000 and 10,000. Many, according to Kaya, are fleeing “European economies in turmoil.” Some young Turks also feel alienated in Europe, where economic difficulties have helped feed “racism, xenophobia and Islamophobia,” Kaya noted.

One such European returnee is 26-year-old Senol Yelen. Born in Bünde, Germany, to Turkish immigrants, Yelen moved to Izmir earlier this year. With his language skills and knowledge of Europe, it took him only three days to find a job as an export manager at Bambi Mobilya, a company that makes sofas and beds that is looking to expand its European exports. “I have training in Europe. I lived in Europe. I know the German culture and mentality,” Yelen said.

Yelen prefers life in Turkey. “I see in Turkey big growth. Turkey is a country with many possibilities. Germany is not so good to work and to live in,” he said.

According to research conducted by Faruk Şen, chairman of the Istanbul-based Turkish-German Education and Scientific Research Foundation, continuing economic uncertainty in Europe and the United States is the major reason why young Turks, whether they are from diaspora communities or are expatriate students, are returning. “The young people and the academic people come back to Turkey because they see no chance in Europe,” Şen said. Older people, finding adjustment harder, are less likely to return.

Onur Kabadayi, 29, is an example of a student expatriate who decided to return. Originally from Ankara, Kabadayi had big dreams when he helped found a web company in Chicago in 2006. He had completed a master’s degree at Northwestern University and stayed on to run the company, Networked Concepts, which created interactive online video products.

In 2008, the global financial crisis soured investor sentiment. “The crisis started; the funds were draining,” he said. “We found some small investment, but never got enough.”

Casting about for what to do next, Kabadayi moved to Istanbul to hawk his skills and take advantage of his American education. After four months, he was hired as an Internet product manager at Hurriyet, Turkey’s largest newspaper. Today, he runs Hurriyet’s social media products and manages a team monitoring the country’s blogger community. He is still interested in running his own business, but considers the move a success.

Not all returnees are making a smooth transition. Born in New York to Turkish immigrants, Ferdi Ferhat Özsoy, 26, is among those who have struggled to find a full-time job.

A pivotal moment for Özsoy came in 2008, when he heard Prime Minister Recep Tayyip Erdoğan boast of Turkey’s growing prosperity and regional influence during a speech in New York. “His advice I remember clearly -- telling the people to become American citizens, to establish themselves. He said it was good to have a solid Turkish voice in the United States. But he also explained how Turkey had changed. They had brought inflation down, good stuff,” Özsoy recalled.

Özsoy, who had studied to be a history teacher, could not find a job in 2009 in New York. But he had always wanted to live in Istanbul. His family and friends in the United States told him he was “crazy” for wanting to live in Turkey.

After returning, he began studying for a master’s degree and found work as a freelance translator. “You gotta be a hustler to be in Istanbul,” said Özsoy, speaking in English, his words spiced by a New York accent. A permanent job has been more difficult to find. One interviewer was straightforward enough to tell Özsoy he was not Turkish enough, that he was too American. Other interviewers expressed disappointment with his resume. “They wanted to see big names, like Harvard. They say, ‘Why did you go to Brooklyn College?’”

Still, the statistics bolster Özsoy confidence that he will land a permanent job when he receives his graduate degree.

In May 2011, youth unemployment in Turkey dropped to 17.5 percent compared to 19.8 percent during the same period the previous year, according to TurkStat, the government statistics agency. The official figures additionally show that total unemployment fell to 9.4 percent in May 2011 from 11 percent the previous May. Critics say government unemployment figures under-report the number of people who are out of work. They also accuse the government of carefully crafting Turkey’s economic narrative in ways that conceal warning signs of an overheating economy.

Despite lingering suspicions, many of Özsoy’s Turkish friends back in New York are curious about his experience in Turkey and are considering moving themselves. He tells them the key is to have some kind of support. The building his parents built with money saved from working in the United States provides him with a place to live rent-free as he searches for stable work. “When we talk about the American dream I think my parents accomplished that,” he said. “This building proves that. If you don’t have something, it will be a problem.”