Central Asian dissidents are anxious about what might happen next in Turkey. 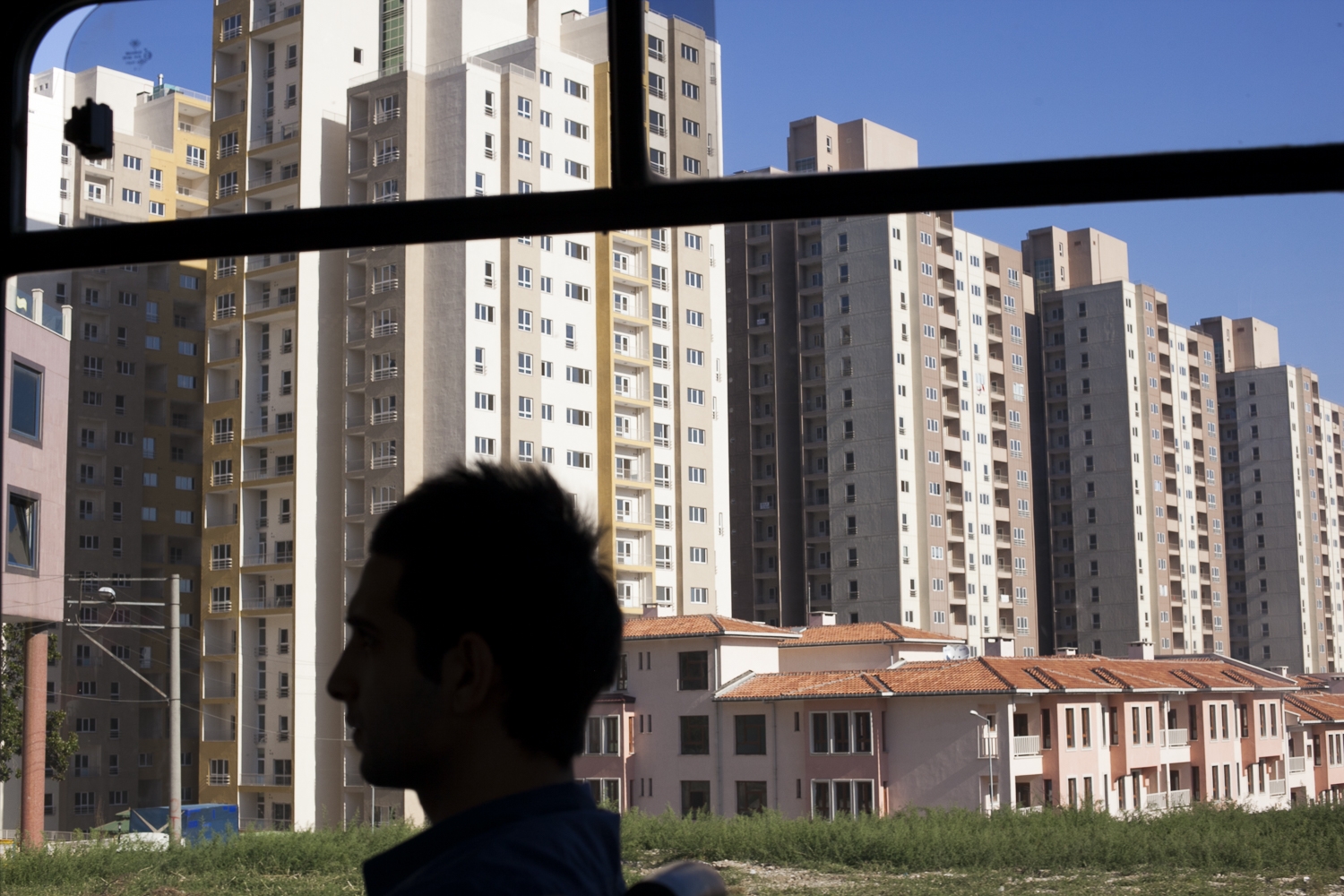 A man on a bus in Bursa, Turkey. (Eurasianet)

There was a time when Turkey felt like a safe haven for victims of political repression in Tajikistan. But the threat of attacks by groups like Islamic State and a state of emergency declared after a July 2016 coup attempt have changed all that.

As well as embarking on a wave of arrests that put almost 50,000 Turkish nationals behind bars, the government has diluted the protections once afforded to foreign dissidents. Moreover, informal connivance among governments has eased the process of casting out unwanted elements.

Over several days in early February, a group of officials with the Tajik consulate in Istanbul dropped by a teahouse to try and cajole the owner, 55-year-old Numonjon Sharipov, into returning to Tajikistan.

Sharipov had every reason to resist the overtures. He had fled to Turkey in 2015, following a crackdown on the Islamic Renaissance Party of Tajikistan, IRPT, of which he was a prominent member. In August that year, the Tajik government banned the opposition party, which lost its only two seats in parliament in dirty elections a few months earlier. The bulk of the party leadership were then arrested and subsequently sentenced to lengthy prison terms.

And then on the evening of February 5, as Sharipov was strolling past his teahouse with two friends, he was stopped by police and asked for identification papers. After detecting a purported irregularity, police took Sharipov to a detention facility in Istanbul’s Kumkapi district. Sharipov’s friends quickly called a lawyer, Sinan Berge.

“All the police would say at first was that Sharipov was wanted by Tajikistan on terrorism charges,” Berge said.

After further quizzing, police finally admitted Sharipov had been assigned a special security designation, G-87. This label is usually reserved for individuals who pose an imminent security threat, like members of the Islamic State group, which has been blamed for killing hundreds of civilians in Turkey.

“Once they put that code on a person, police told me, we cannot do anything else. We cannot get more information on the reasons behind it and lawyers cannot file a case to stop the deportation,” Berge said.

In the week that followed, Berge pursued various legal ploys to halt the deportation. Authorities complicated his quest by moving Sharipov to another detention facility while holding his passport at yet another location, making it difficult for the lawyer even to register as counsel. This ruse is a common practice, says Berge, who was forced to rely on assurances from immigration officers.

“I told them not to send him to Tajikistan, because he is a political opponent and he will be in danger there,” he said.

A glimmer of hope appeared on February 16, when a senior immigration official told Berge that he could buy his client a flight to a third country – most likely Georgia or Iran – to avoid deportation to Tajikistan.

That turned out to be a lie. Even as the official and Berge were speaking on the phone, Sharipov had been whisked away by Tajik consular officials. Shortly after, it emerged Sharipov had been flown to Tajikistan. Some days later, he resurfaced to give a phone interview in which he stated he had returned of his own free will, but rights activists gave the claim little credence and said it had been made under duress.

“I don’t believe he was officially deported, but it looks like the Tajikistan officials forced him to leave Turkey without following proper procedures,” Berge said.

The case is far from unique. Ibrahim Ergin, a lawyer with the Refugee Rights Association, said a broad pattern is emerging in how Turkey returns dissidents to authoritarian nations – not just Tajikistan, but also other Central Asian countries, Russia and China.

“It’s the same thing we see that was done with these political opponents from Tajikistan, the same pattern. A country wants these men back, and Turkey wants good relations with that country, so they use these tactics to deport them,” Ergin said. “These people are clearly not terrorists, but their governments are uncomfortable with them and they want them in their custody.”

Turkey has ostensibly signed international laws intended to safeguard foreign nationals who could face the death penalty, torture or degrading treatment if sent home. But since the state of emergency has been in place, a handful of loopholes has been introduced.

It was always the case that individuals identified as members of internationally recognized terrorist organizations or organized crime groups could be deported. Even people granted protection status could be expelled if the Turkish government deemed them a threat to national security – if they had been slapped with the G-87 designation.

This arrangement has been greatly loosened in the last year and a half. A prohibition on deporting individuals applying for international protection was scrapped. All it now takes for Turkish authorities to deem somebody a pressing threat is for a foreign government or an international organization to designate a group to which that person belongs a terrorist group.

A high court in Tajikistan gave the Islamic Renaissance Party that designation in September 2016. One year later, the Collective Security Treaty Organization, a Moscow-led military bloc of which Tajikistan is a member, followed suit. All Western governments have pointedly ignored appeals to do so the same, in a mute acknowledgment of the politicized hounding of the IRPT.

One estimate by Humanitarian Relief Foundation, or IHH, an Istanbul-based charity, put the number of individuals with a G-87 code in 2016 at 40,000. This tool has become a favored way for Turkish authorities to cooperate with governments seeking to have dissidents extradited, human rights lawyers say.

Tajikistan sought to broaden its dragnet in November by announcing it had asked Interpol to issue wanted notices for 1,873 individuals sought on suspicion of terrorism offenses and attempting to overthrow the government. The colossal number of applications instantly made Tajikistan – a nation of some 9 million people – the world’s largest per-capita issuer of such notices.

In some cases, individuals have mounted successful challenges. In March, IRPT leader Muhiddin Kabiri was removed from the Interpol wanted list following a legal campaign.

There are other tools at Tajikistan’s disposal. In August, the National Bank of Tajikistan said it had put 1,178 entities on a list of terrorism financiers. Turkey is now using that list to hold the leaders of another opposition movement, Group 24, which Dushanbe banned in 2014.

On March 19, Turkish police detained Group 24 leader Suhrob Zafar, along with another top member, Nasim Sharipov (no relation to Numonjon Sharipov), at their homes in Istanbul. Police reportedly told the pair they were acting at Tajikistan’s request.

The next morning, Ergin, the lawyer from the Refugee Rights Association, visited the police station where the men were being detained and was told the two were wanted by Tajikistan for connection to terror organizations.

“At first they said there is an Interpol notice for them, and then they also said the men are on a list of terror financiers issued by the Tajikistan national bank. And then they added they have been designated with a G-87 security code in Turkey,” Ergin said.

Both men have applied for international protection with the UN Refugee Agency, which should insure them from deportation. On April 10, RFE/RL’s Tajik service, Ozodi, quoted Interior Ministry Spokesman Umarjoni Emomali as saying Dushanbe had formally requested their extradition.

Zafar has been on the receiving end of a deportation bid before. In 2014, he and Umarali Quvvatov, the businessman founder of Group 24, were detained by Turkish authorities, again at Tajikistan’s behest. But they were later released after a court ruled they were not members of a terrorist group.

“Tajikistan tried hard to have them deported. There was an investigation, a court case, and after two months the court freed them,” said Group 24 spokesman Nuriddin Rizoyi. “Now the question is, why are these two being detained for the same reason?”

In March 2015, Quvvatov was gunned down in Istanbul, a killing many of his colleagues pin on the Tajik government. That murder and the recent deportation leave opposition activists anxious about what might happen next in Turkey.

"Tajikistan and Turkey’s governments are getting along very well now. And recently another opposition leader, Numonjon Sharipov, was deported so we are very worried," said Rizoyi.

On March 21, Ergin successfully petitioned Turkey’s Constitutional Court to pause any deportation proceedings for the Group 24 activists. It was mixed victory however. While acknowledging that the men could face torture or death if returned to Tajikistan, the court reminded the petitioners of the law, brought in under the state of emergency, permitting authorities to deport beneficiaries of international protection status in the event they are found a threat to national security.

As in Sharipov’s case, Tajik consular officials have visited the detention center where the Group 24 leaders are being held. The men could remain in custody until a final decision is made or they could be released. But given the current pattern of deportations, Ergin said that even with a court decision in their favor, there is no guarantee that Zafar and Sharipov will not be sent to Tajikistan.

Umar Farooq is a journalist based in Istanbul.

Umar Farooq is a journalist based in Istanbul.