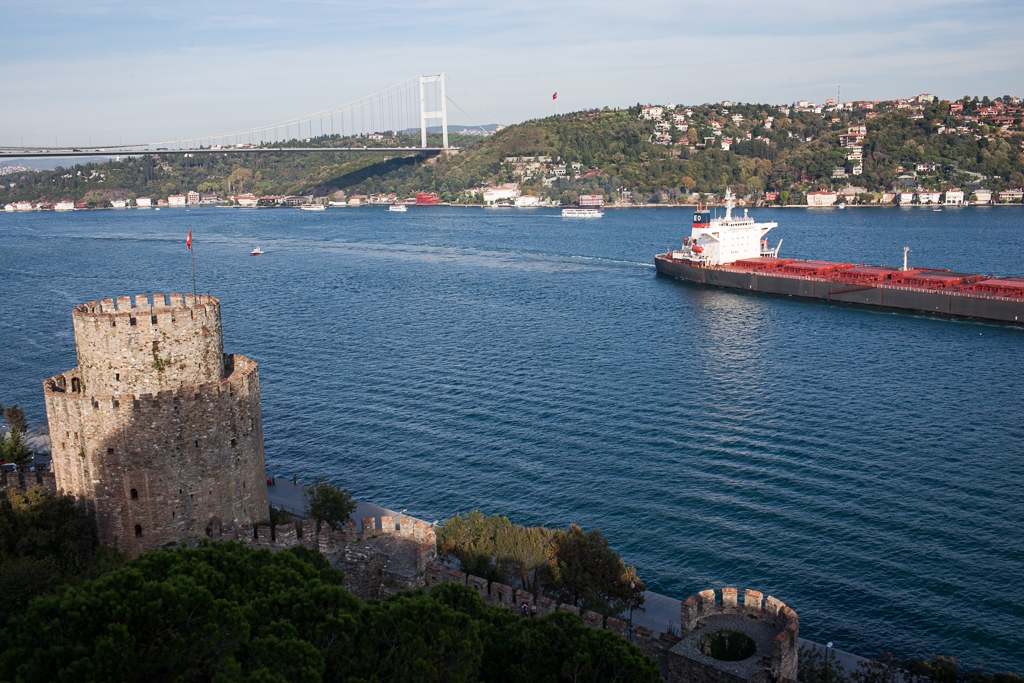 The canal project could undermine the 1936 Montreux Convention that governs passage through the Bosphorus. (David Trilling)

Turkey has signaled that it intends to start work this year on its long-discussed Kanal Istanbul project, an artificial canal connecting the Black Sea to the Sea of Marmara. The project has faced controversy within Turkey for its cost, environmental impact and potential for corruption. But its international implications could be substantial as well, threatening the delicate regional military balance and impacting maritime trade with the Caucasus and Central Asia.

President Recep Tayyip Erdogan said in early April that a tender would be issued and preliminary construction work would begin this year on the 45-kilometer ship canal.

Plans for the canal were first unveiled by Erdogan, then prime minister, in 2011 in what he himself described as a "crazy project." Its stated purpose is to create a safer transit route for oil tankers to transport crude from the Black Sea to global markets, which now traverse the narrow, occasionally treacherous Bosphorus straits through the country’s largest city, Istanbul. Construction of the canal and associated infrastructure is estimated to cost more than $20 billion.

The impact it will have on regional security and trade is likely to be extensive, but just how remains unclear.

Most recently, the canal was the source of political turmoil when a group of 104 retired admirals published an open letter warning that it would undermine the Montreux Convention, the treaty which since 1936 has governed passage between the Aegean and Black seas and given Turkey geopolitical heft in the region.

The convention stipulates that all merchant ships must be given free passage during peacetime through the “Turkish straits” – that is, the Bosphorus through Istanbul and the Dardanelles further to the southwest that separate the Sea of Marmara from the Aegean Sea. It also restricts the movement of military vessels, limiting them to 15,000 tons or under, with additional curbs on the size and type of weaponry they can carry, and places a limit of 21 days in the Black Sea for military vessels from countries not bordering the sea.

Following the admirals’ letter, Erdogan responded that Turkey remains committed to the Montreux Convention. But he also confirmed that the Turkish government sees the planned canal as not subject to the convention’s regulations.

That admission could give credence to the admirals’ warning that the canal would expand access for military vessels into and out of the Black Sea. It could thus both upset the regional security balance and pit Ankara against its neighbors and other international players.

The convention’s restrictions limit NATO members’ naval activities in the Black Sea, as well as Russia's ability to send large vessels from its Black Sea fleet into the Mediterranean.

If the planned canal turns out not to be subject to the Montreux Convention, it would allow Turkey to permit larger and more powerful naval vessels, like aircraft carriers, in and out of the Black Sea, and for longer periods.

Just how sensitive such a change would be was recently thrown into sharp relief by the heightened tensions resulting from Russia massing troops on the border of Ukraine and the United States announcing in response that it would send two warships into the Black Sea.

Although Washington subsequently backtracked and did not deploy the vessels, and Russia is pulling back its forces, the episode illustrated the kind of leverage Ankara would have with those two powers, along with other states, if it were no longer bound by the Montreux Convention.

Ukraine President Volodymyr Zelensky visited Istanbul amid the crisis on April 10. His meeting with Erdogan took three hours rather than the originally scheduled one, and Erdogan’s subsequent comments suggested that naval security was on the agenda: He called for a peaceful, diplomatic resolution to the rising tensions between Russia and Ukraine and declared that Turkey's "primary goal is that the Black Sea continues to be a sea of peace, serenity and cooperation."

The public rationale for the project, though, has little to do with security. Its ostensible logic is instead rooted in the Bosphorus’s key role in international trade.

Currently, crude oil from Russia, Azerbaijan and Kazakhstan arrives in the Black Sea via five separate pipelines from central Russia and the Caspian Sea, where it is loaded onto tankers.

Turkish officials have argued that flow through these pipelines is going to rise, which would lead to increased tanker traffic through the Bosphorus.

But it’s not clear that this is likely, or if so, for how long.

Data produced by Turkey's Directorate of Maritime Affairs shows that, over the past 15 years, while the tonnage of vessels passing through the Bosphorus has risen by 30 percent, the number of vessels has fallen by 43 percent. The number of oil tankers has decreased by 31 percent.

At most of the fields that now produce crude transported on the Black Sea, output is broadly in decline. Only at two oil fields in Kazakhstan is output expected to rise significantly, while global demand for oil is generally projected to decline as more countries take steps to reduce carbon dioxide emissions to combat climate change.

Further, there are options other than Black Sea pipelines to transit crude from east to west. Much oil from the Caspian basin already goes to refineries in Bulgaria, Romania, and Ukraine. Oil consumption in Bulgaria and Romania has been growing, a trend that could see more crude remaining in the Black Sea basin without needing to be transited through the straits.

There are also pipelines that allow transit to bypass the Bosphorus.

Some Caspian oil arriving in the Black Sea goes to Belarus, via the southern section of the Druzhba pipeline network through Ukraine. The line normally carries Russian crude south to the Black Sea, but has been reengineered to allow for reverse flow, and now periodically sends crude from Azerbaijan to Belarus.

Also carrying Caspian oil away from the Black Sea is the Baku-Tbilisi-Ceyhan (BTC) pipeline, which transits mainly crude from Azerbaijan, direct from the Caspian to the Mediterranean. Commissioned just 16 years ago at a cost of $3.9 billion, it has an expected working life of 40 years. But since 2011 annual flows through the pipeline have never averaged more than 72 percent of its capacity of 1 million barrels a day. For the past year, it’s only been operating at 57 percent capacity.

With only minor modifications, BTC's capacity could be further increased, which with existing unused capacity would enable it to carry a significant part of any future increase in Caspian oil transit which would otherwise have passed through the straits.

Erdogan has made no secret of the fact that he views Kanal Istanbul as a project of great personal importance that he intends to see completed despite mounting criticism over the potential political, military, commercial and environmental impact, both from within Turkey and internationally.

But even as the contracting and construction of the canal is set to start, the basic business case for it is not clear: Why would shippers opt to pay a transit fee to use a canal when the Bosphorus is free?

Turkish officials insist that the canal will offer a safer option for transit than the Bosphorus, and have suggested that the canal would allow shippers to avoid the delays from which Bosphorus traffic occasionally suffers.

While it's true that navigation through the planned canal will not entail the same tricky 90-degree turns that the Bosphorus requires, accidents in the straits are nevertheless extremely rare.

The last major incident involving a tanker – a Russian fuel oil tanker, not a super tanker carrying crude oil, was back in 1999, before a radar vessel transit system (VTS) was installed to track vessels and help aid safer navigation. In the 19 years that the VTS has been in operation there have been no major incidents involving tankers and no oil spills at all.

Delays are not uncommon on the Bosphorus, which can be closed due to bad weather or the passage of unusually large vessels which require traffic to be restricted to one direction only. But they rarely last more than a few hours and the canal, if built, would likely face similar limitations.

And the recent incident on the Suez Canal, which was blocked for six days after a container vessel ran aground, demonstrates that even the best managed canals are not immune from accidents.

The canal will thus offer little advantage to vessels traveling in either direction and it appears increasingly likely that, to encourage ships to use it, Ankara will have to direct traffic there one way or another.

It could revoke the Montreux Convention entirely, or more likely introduce new restrictions on Bosphorus traffic that would have the practical effect of reducing traffic through the straits without altering the convention.

Such a move wouldn’t be unprecedented. In the mid 1990s, Turkey required all vessels passing through the Bosphorus en route to or from a Turkish port to employ a Turkish pilot for the traverse. While large tankers do opt to use pilots, most other vessels transiting the Bosphorus choose not to incur the expense.

Ankara also says it will not allow tankers carrying liquid natural gas (LNG) to transit the Bosphorus, a stance that technically violates the Montreux Convention but which has never been tested given that no Black Sea littoral state has an LNG import or export terminal. But it’s also not clear that it would allow LNG tankers to use the canal, given that it will be narrower and potentially just as dangerous as the Bosphorus.

In any case, the government may come up with new rules designed to nudge shippers toward the Kanal, whether they like it or not.

Erdogan may see the canal as helping ensure the Black Sea “continues to be a sea of peace, serenity and cooperation." But his neighbors may take more convincing.