The large North Caucasus diaspora has found itself on opposite sides of Turkey’s polarized politics. 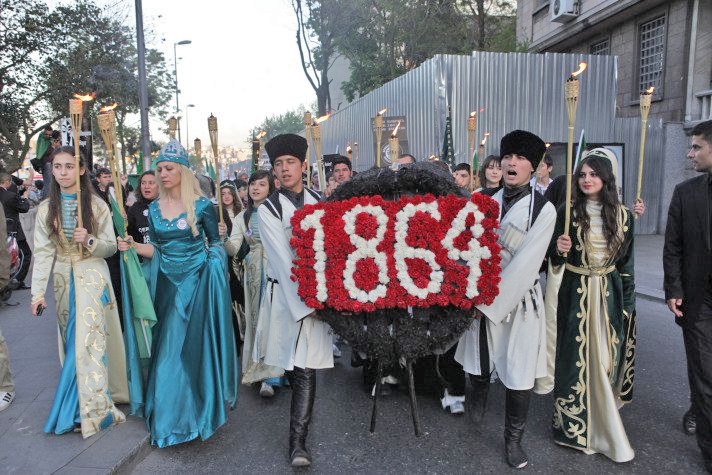 Circassians commemorate the banishment of the Circassians from Russia in Taksim, İstanbul. (Soerfm/CC BY-SA 3.0 via Wikimedia Commons)

“We have never been united,” says Janberd Dinçer, one of Turkey’s leading Circassian activists. “But today, we are more divided than ever.”

For the past century and a half, since being expelled from their homeland in Russia’s North Caucasus, Circassians have formed an integral part of Turkish society. Today, estimates of their numbers range from several hundred thousand to 3 million, depending on one’s criteria. “We [Circassians] have always been politically active, for more than 100 years now,” Dinçer says.

Dinçer is a leading member of the Federation of Caucasian Organizations of Turkey, known by its acronym in Turkish, KAFFED. This is the oldest Circassian community group in Turkey, operating since 1952. KAFFED counts some 53 khases, Circassian social-political communities that function as grassroots cultural organizations, under its umbrella.

But it is not the only Circassian group in Turkey, and has recently been joined by a rival association, the Federation of Circassian Associations, or CERFED. “We are friends with KAFFED, but we have very different views,” Nusret Baş, a deputy head of CERFED, told Eurasianet. “They are not as open to new ideas as we are.”

Circassians are Muslims, but the two groups take different approaches to Islam. “In Caucasian traditions, men and women sit together, there is no distinction,” says Umit Dinçer, another senior KAFEED leader (and no relation to Janberd Dinçer). “But in the religious way of living, you have to cover your head; it is much more strict.”

“We have never thought this way,” echoes his colleague Janberd. “That’s the big difference: we don’t rule our lives with religion.”

CERFED, on the other hand, represents Circassians who adhere to a practice of Islam more in line with contemporary Turkey. They tend to eschew alcohol, wear the hijab, and attend mosque more frequently than their counterparts.

CERFED’s rise coincides with an effort by the ruling Justice and Development Party (AKP) to reach out to Circassians. That effort began in 2010, when AKP leaders held meetings with various ethnic minority organization under what was termed the “democratic opening” process, Zeynel Besleney, a Turkish Circassian scholar and author of The Circassian Diaspora in Turkey: A Political History, told Eurasianet. Many observers believe that the ruling AKP is behind the emergence since then of several Turkish Circassian groups, including CERFED, which was formed in 2013.

“The AKP formed its own khases, religious ones,” Janberd Dinçer said. “They wanted khases that are loyal [to the party]. That’s what we believe.”

But Baş is adamant that CERFED is apolitical. “We do not have any political affiliation,” he says, adding that it is illegal for cultural organizations such as his to conduct political activity. “Our members have many different views, they are not one bloc.”

Whatever the case, the AKP’s use of social and religious issues as wedges to divide Turkish society has made it impossible for secular and religious Circassians to cooperate well, Besleney said. “Turkish society is so polarized today that those who support the AKP find they cannot be in the same organizations as those who do not,” he said. “This has naturally led to pro-AKP Circassians leaving the old secular groups and forming their own khases.”

The membership of these new, conservative groups also reflects the social geography of Turkey. “Central Anatolia is mostly a very conservative region, and so are the Circassians living there,” says Besleney. That is CERFED’s base, while KAFFED is a more broadly dispersed organization, with support in northwest Anatolia (another main area of Circassian settlement in Turkey) and throughout the country.

The two also differ greatly in scope. KAFFED has dozens of khases, and CERFED only a few – although this is offset by a seemingly disproportionate amount of financial resources, another factor leading many to suspect the group has close AKP ties.

There is one point on which KAFFED and CERFED are united: the need to maintain and strengthen links with their lost homeland.

For KAFFED, this has necessitated pragmatic relations with Russia, despite the historical traumas of their expulsion. “We know what happened in the past, but we can’t live with this hate,” said Janberd Dinçer, who has visited Maykop (the capital of the Republic of Adygea, the ethnic republic of today’s western Circassians) several times. “We need to have contact with the homeland.”

CERFED, meanwhile, takes a more assertive approach toward Russia. Their annual May 21 rallies commemorating the Circassians’ expulsion from the Caucasus involve much more heated rhetoric and imagery than KAFFED’s, including bloody skulls on staffs. “KAFFED’s view is, ‘don’t say anything negative about Russia,’” Baş said. “We [CERFED] aren’t blaming today’s Russia [for the past], but they must treat these wounds.”

While Circassians have in large part integrated in Turkey during their second century in exile, adopting the local language and societal and political norms, they still cling to hopes of returning to their homeland, seeing it as the best prospect for preserving the Circassian language and identity. “We have a good life here, but it is not our land. Here we will die out,” Janberd Dinçer said. “The homeland is the only place we have a future as a people.”

Baş agrees. CERFED’s goal is to attain dual citizenship, Russian and Turkish, for all of Turkey’s Circassians. “This is essential for us,” he says.

Neil Hauer is a Tbilisi-based writer. Sign up for Eurasianet's free weekly newsletter.