A dwindling community celebrates a holiday feast and commemorates an epic battle of survival. 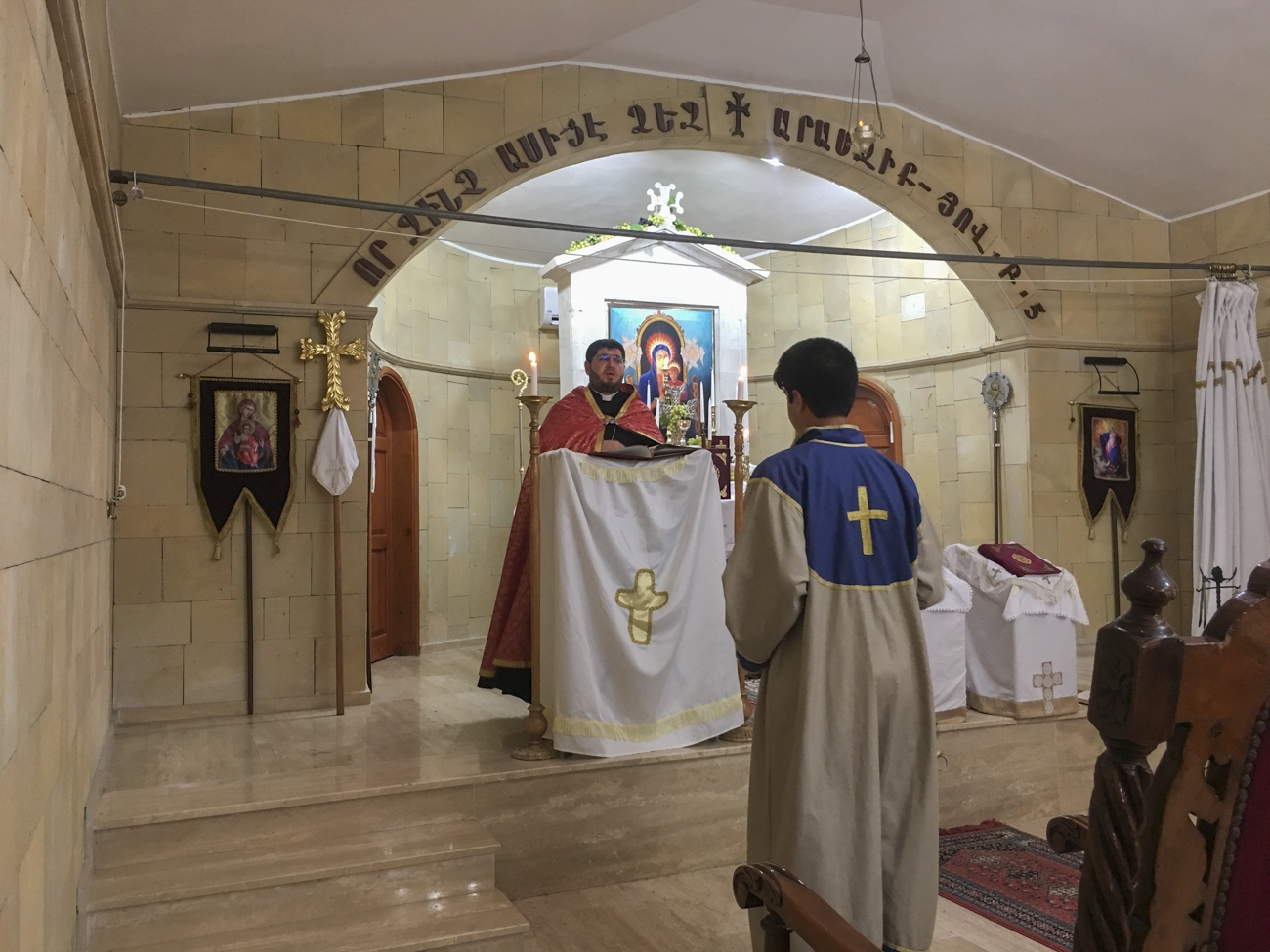 A priest leads prayers during the holy feast of Asdvadzadzin in Vakifli, Turkey. (All photos by Ayla Jean Yackley) 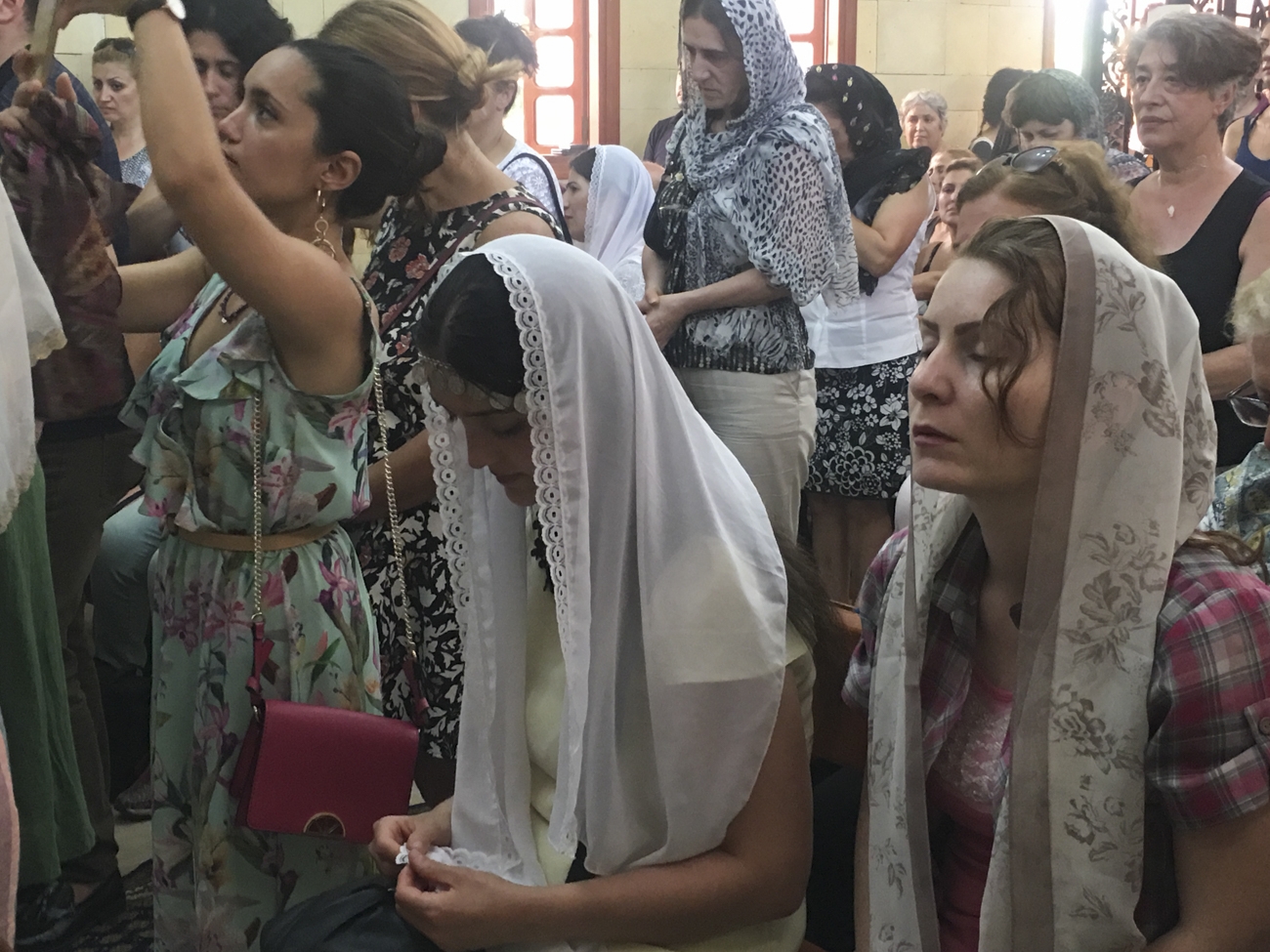 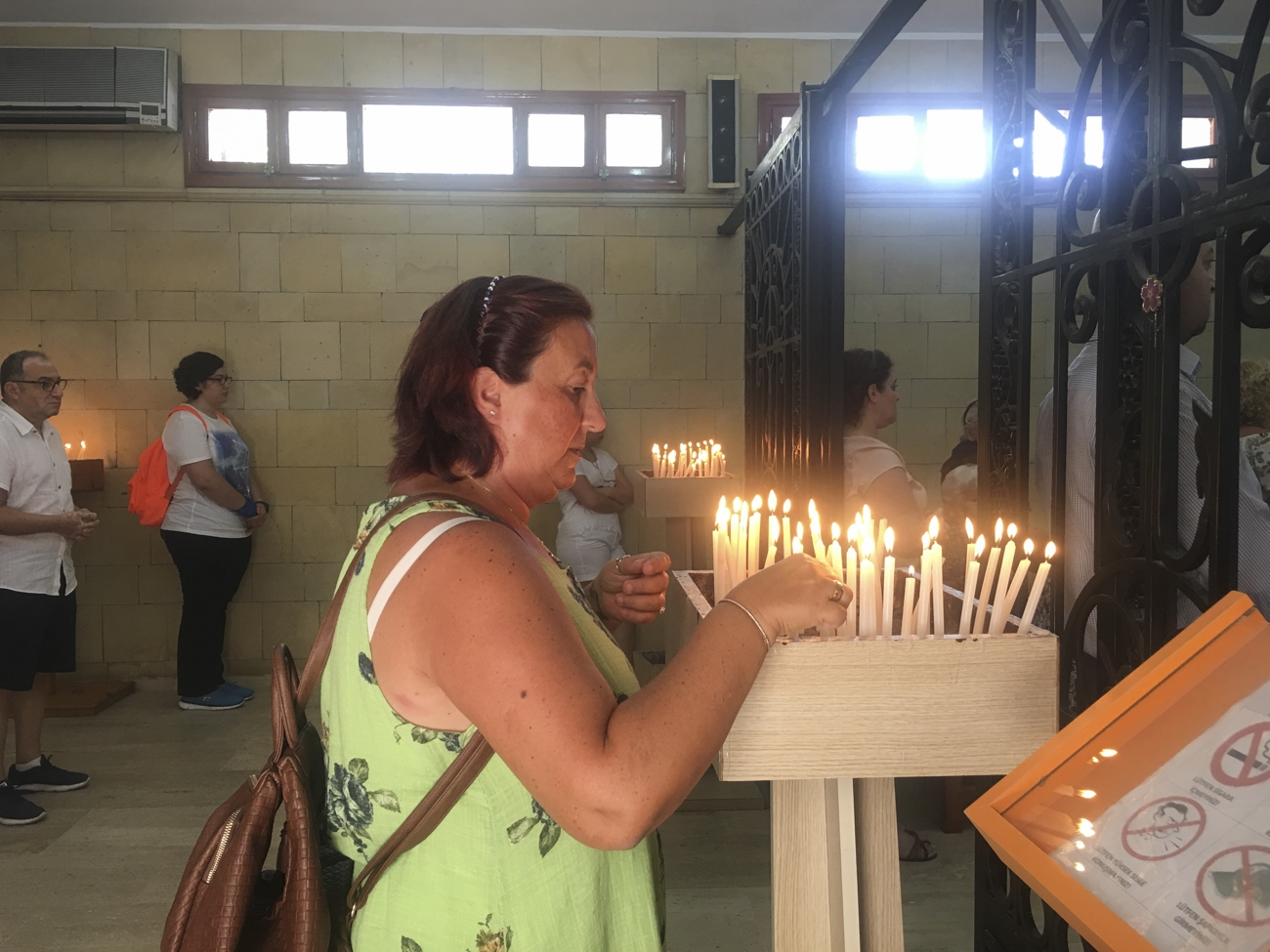 A woman lights a candle during mass at Surp Asdvadzadzin in Vakifli. 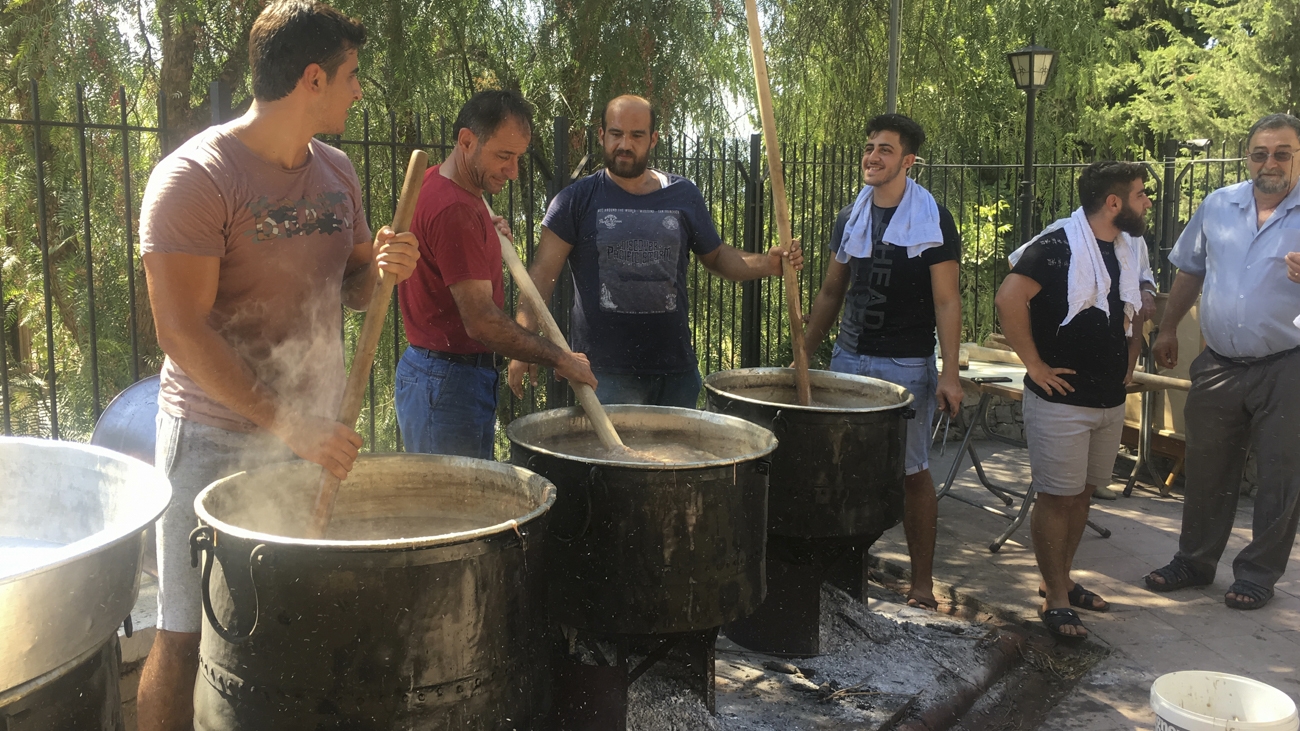 Men stir vats cooking the traditional stew harissa to pay homage to the Armenian villages that once occupied the slopes of Mount Moses. 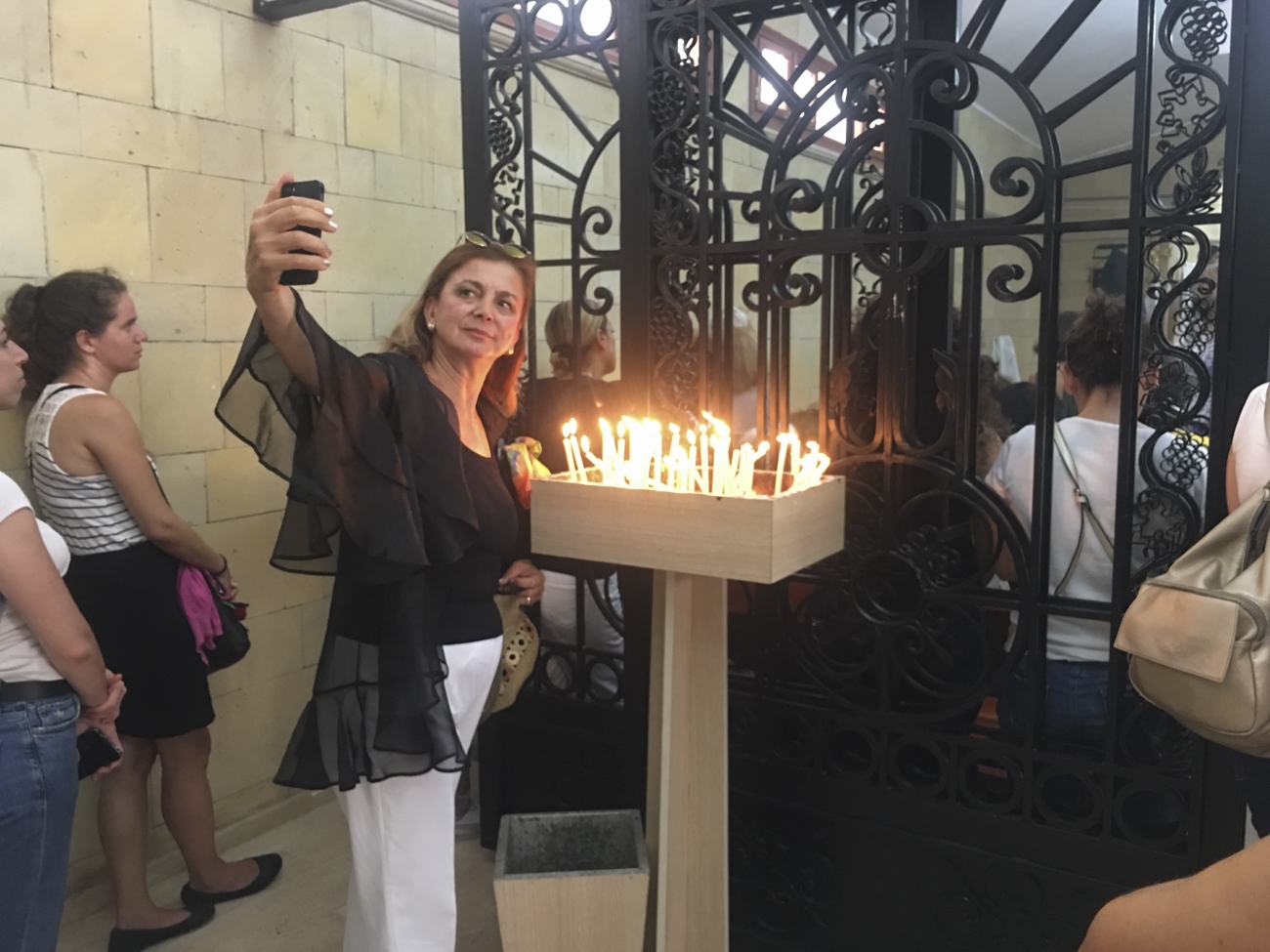 A woman poses for a picture while attending mass to celebrate the Assumption holiday. 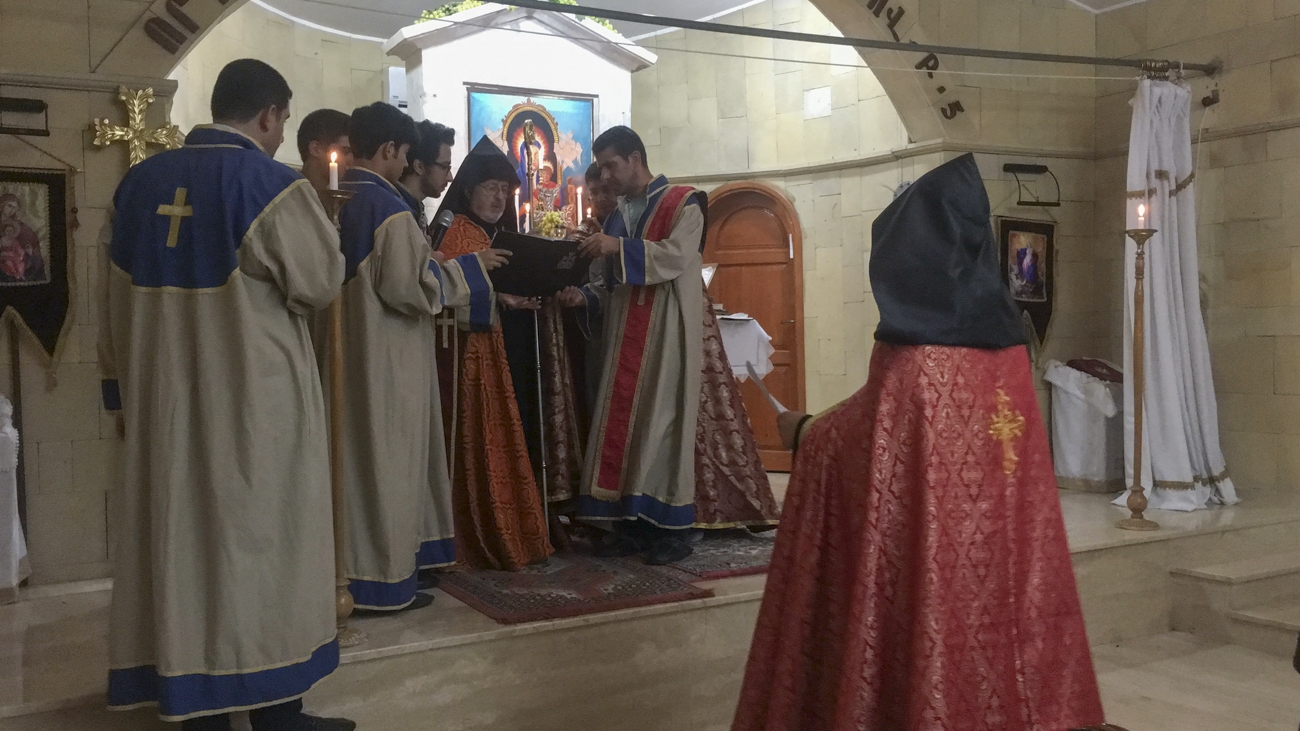 Istanbul Archbishop Aram Atesyan, the Armenian Church’s acting patriarch, celebrates mass during Asdvadzadzin, the Feast of the Assumption.
prev
next

Turkey’s sole remaining Armenian village endured an onslaught by the Ottoman army a century ago and a rebirth in a staunchly nationalist republic. Today, the inhabitants of Vakifli battle far different pressures that threaten the community’s survival.

Set atop a remote hill in Turkey’s Hatay province, Vakifli has seen its population dwindle in recent decades as younger generations depart to pursue employment, education or marriage elsewhere. The village, about 13 miles from the Syrian border, also has weathered the fallout from the seven-year conflict there.

These earthly concerns are put aside for three days each August when more than 1,000 pilgrims and tourists descend on Vakifli to mark the Christian holiday of Asdvadzadzin, or the Assumption of Mary, and the blessing of the grapes, an ancient rite that celebrates the first fruit of the harvest. This year, Archbishop Aram Atesyan of Istanbul presided over the mass and sanctified the feast on August 12.

The event also pays homage to the six other Armenian villages that once occupied the slopes of Mount Moses, or Musa Dagh in Turkish, which stands north of Vakifli. The night before the mass, villagers light fires beneath seven cauldrons to prepare harissa, a stew of beef, wheat and salt that evokes the provisions their forebears survived on during exile to the mountaintop to escape the Armenian genocide in 1915.

The extraordinary story of the Musa Dagh resistance, and Vakifli’s perseverance a century later, are rare examples of survival among Turkey's Armenians. Subject to massacres during World War I in which up to 1.5 million Armenians were killed, Armenians have mostly disappeared from the lands in Turkey they occupied for millennia. Scholarly consensus holds that the killings amounted to a genocide, a judgment the Turkish government continues to reject.

For the descendants of the Musa Dagh rebels, honoring their memory each year represents their own form of resistance against the inexorable forces of demographic change.

“We grew up with these stories,” said Garo Bebek, 22, who spent the night during this year’s Asdvadzadzin festival stirring the cauldrons with a group of friends and relatives. “We are the last of the youth here, and if we go, we know that soon there may be nothing left.”

Bebek’s great-grandfather was a small child when his family and 5,000 others scaled Mount Moses in the summer of 1915. News of attacks on Armenians elsewhere in Turkey had already reached the villages when they received the government’s deportation order. Rather than submit to the long march to the Syrian desert and near-certain death, about 150 armed men fended off 4,000 or more Turkish troops for 53 days until their evacuation to Egypt on Allied battleships.

Their saga was memorialized in Austrian novelist Franz Werfel’s 1933 “The Forty Days of Musa Dagh.” The book also served as a forewarning of the menace that would soon befall European Jews, who passed around copies of the novel in the ghettos of Poland and Lithuania during the Holocaust.

Over the decades, Turkish officials have “argued that [Armenians] rebelled and they did what was necessary,” said Yektan Turkyilmaz, a visiting fellow at the Friedrich Meinecke Institut at Freie Universitat in Berlin, who studies the period leading up to the genocide. “What Musa Dagh shows us […] is Armenians were killed not because they resisted, but because they succumbed. In most areas, there was no resistance, and that’s where we have catastrophe.”

These days, there are few hints of those past horrors in idyllic Vakifli, a collection of stone houses nestled among poplars, Judas trees and olive groves, the scent of laurel infusing the air. A converted silk factory houses the town’s only church. Turkish authorities shut the Armenian school, where children once learned their endangered local dialect, eight decades ago.

Elderly denizens gather at the former school’s courtyard or a cafe down the road for a chat or game of backgammon. Below the town is a hilly blanket of green that gradually gives way to the Mediterranean Sea.

Vakifli’s 130 residents farm 50 acres of land, raising citrus fruits, walnuts, and honey. Women jar fruit and sell homemade jams and pomegranate syrup to tourists who flock here for the cool breeze in summer – and a window into Turkey’s multicultural past.

Hatay, which sticks out like a thumb along Turkey’s eastern Mediterranean coast, escaped much of the forced assimilation during the early years of Turkey's republic and remains unusually diverse, home to various denominations of Christians, a small Jewish community and Alawites, Alevis and Sunni Muslims.

After the war, Armenians returned to the province, which was then part of the French Mandate for Syria. A controversial 1939 referendum ceded the land to Turkish control, prompting most of the area’s 10,000 Armenians to leave for Lebanon and Cyprus, Turkyilmaz said. “All that is left that has remained wholly Armenian is Vakifli,” he said.

Only 20 or so of the villagers are under the age of 25, and whether they will make their lives here “is the question on everyone’s mind. Our elders implore us to stay,” said Levon Capar, 20, who studies computer science at a university an hour’s drive away. “If I stay, the most I can do is tend to my father’s gardens, and it’s impossible to survive on that. After I finish school, I will go wherever I find work.”

Vakifli celebrated just one wedding this year, and the bride moved to her husband’s home in the nearby city of Mersin, said Berc Kartun, 55, the village's mukhtar, or leader. “It is hard to get married and start a family here. Most everyone is related.”

Istanbul, Turkey’s largest city with an estimated 15 million people, is home to about 1,000 Vakifli natives, among a total population of 60,000 Armenians.  Others have moved to Europe, Canada and the United States.

“In Istanbul, people from our village take a second, Turkish name to do business. Here we have one name. We don’t hide. Different cultures live side by side here,” Kartun said.

That coexistence is now endangered by a new threat: Syria’s sectarian war. Hatay has sheltered hundreds of thousands of refugees and was forced to close its border to trade with Syria. Earlier in the conflict, borderlands were reportedly used as a staging ground for Salafist fighters.

In years past, Armenians from Syria and Lebanon with roots in Hatay took buses back every year to celebrate the Asdvadzadzin feast, but the trip is no longer possible. Kartun said the conflict had set back his region’s economy “by a decade,” as other tourists feared traveling to Vakifli and nearby historic sites. The village’s farming cooperative struggles under debt and cannot turn a profit, he said.

“Earlier in the war, we would listen to the sounds of Russian artillery fired from the sea, and sometimes the walls of our houses would shake,” he said. “For two or three years, no one came to the festival, afraid fighting would spread here.”

The war hit even closer to home in the spring of 2014, when a few dozen elderly Armenians from the Syrian town of Kessab, 13 miles to the south, fled opposition fighters who had captured their town from government forces. Most were eventually evacuated to Lebanon, though one man died 20 days after reaching Vakifli, Kartun said. He is buried in the town cemetery.

In recent years, Turkish soldiers patrol roads to the village to prevent any violence during the festival. “They want to ensure that not even the smallest incident happens in a village like this again,” Kartun said.

Behind the soldiers looms Mount Moses, where a monument, in the shape of the ship that rescued the Armenians, stood before soldiers dynamited it in the 1980s following a military coup. The graves of 18 fighters who perished defending Musa Dagh were also destroyed.

Now the village plans to open a museum with artifacts the villagers have kept from the century-old battle.

After the 1980 coup, Kartun’s family burned the only photograph of his grandfather on the mountain, fearful its discovery by the authorities would incur retribution. “He was just 18 or 19 years old, a soldier with his first whiskers,” he said. “If I still had it, it would have gone in the museum. There’s nothing to be done, it’s lost. That’s kismet.”