Following the victory over Armenia, Azerbaijan has thanked Turkey by awarding several multimillion-dollar contracts to companies close to the Turkish president. 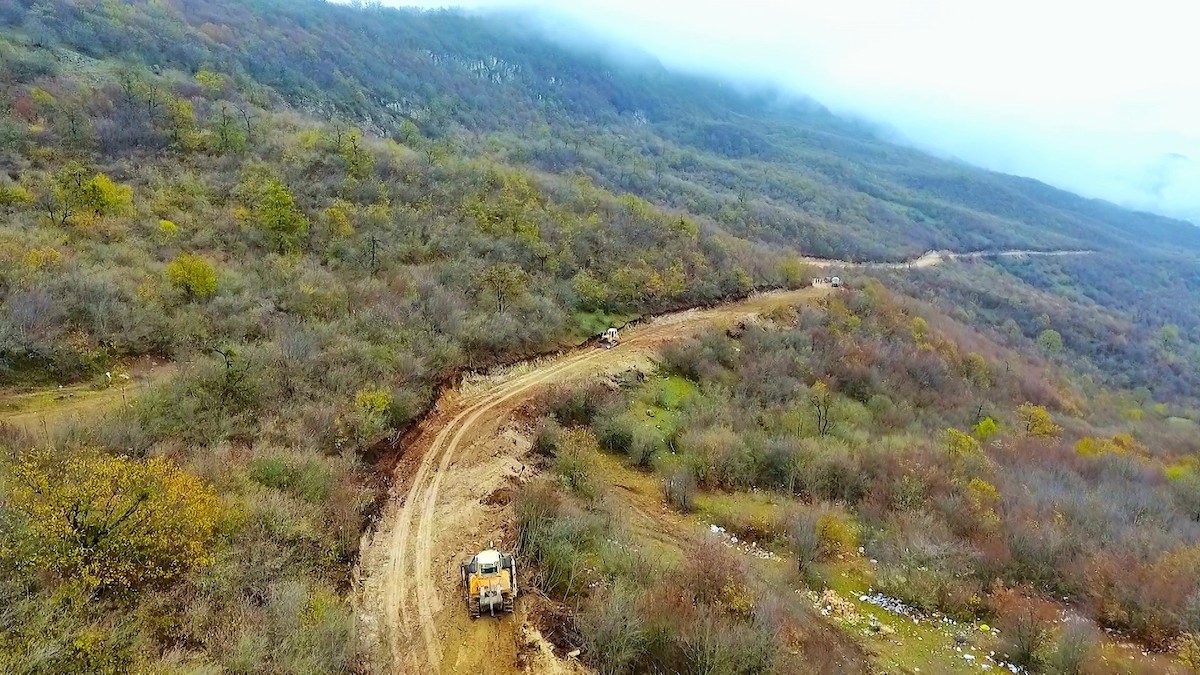 New construction of a road to Shusha, for which at least two Turkish firms have been awarded contracts. (photo: aayda.gov.az)

When Turkish President Recep Tayyip Erdogan visits Azerbaijan next week, he will be mixing business with pleasure.

Erdogan is scheduled to attend a June 16 soccer match in Baku between Turkey and Wales and then visit Shusha, the historic city in Karabakh that was Azerbaijan’s main prize from last year’s war with Armenia. “Inshallah we will have a new holiday in Shusha, following Ramadan,” Erdogan said in March when he first announced his travel plans, which have since been repeatedly delayed.

With the trip now finally on, it will be Erdogan’s first visit to Karabakh following last year’s war, in which Turkish support proved critical to Azerbaijan winning back many of the territories it had lost to Armenians in the first war between the two sides in the 1990s.

Erdogan’s “holiday,” though, will be taking place against the backdrop of a rapidly growing Turkish business presence in Karabakh and the other territories over which Azerbaijan has regained control. Turkish construction, mining, and energy firms all have signed significant contracts to aid in the reconstruction of the territories.

Azerbaijan has been outspoken about its intention to reward “friendly” countries with reconstruction contracts, and Turkey is friendliest of all. In December, Azerbaijan President Ilham Aliyev said that the first reconstruction contracts had been signed with Turkish companies. “And this is natural, because Turkey is a brotherly country,” Aliyev said.

In February, Azerbaijan Prime Minister Ali Asadov told a Turkey-Azerbaijan business forum in Ankara that Turkish companies already had been awarded several infrastructure contracts, including to build a new road to Shusha and another to Kelbajar, another area that Azerbaijan retook in the war. Turkish companies also may be included in the construction of a new airport in Fizuli. “In general, we are very pleased to see our Turkish brothers in the restoration projects.” Asadov said.

At the forum, an additional 11 agreements were signed between Azerbaijan and Turkish companies. The biggest was with a subsidiary of Cengiz Holding, Eti Bakır A.Ş., which signed a cooperation agreement with Azerbaijan’s Economy Ministry at the forum.

The next month, the state-owned firm AzerGold hosted a delegation from Eti Bakır led by Seref Cengiz, the brother of the chairman of Cengiz Holding, Mehmet Cengiz, known for his close relationship with Erdogan.

Then in May, Aliyev signed a decree awarding a contract for exploration and exploitation of  the Gashgacai mine to Eti Bakır. He also awarded contracts to operate two other fields, Elbeidash and Agduzdag, to Artvin Maden, a joint company held by Cengiz Holding and Kalyon Group. The contracts were notable for their length: 30 years.

It is not the first time Cengiz has gotten a substantial contract in Azerbaijan. Another company run by Mehmet Cengiz won a contract in 2007 from Azerbaijan’s state water management company for the construction of a massive hydroelectric dam, the Organized Crime and Corruption Project reported. Following the award, a company controlled by Cengiz made a payment to an offshore company which in turn bought a luxury apartment in London, in which the son of the then-head of the water company lived.

Many of the new Turkish deals have been announced without any previous public information about a tender. The road to Shusha is being built in part by two Turkish firms, Kolin İnşaat and Özgün Yapi, the chairman of the state highway agency, Saleh Mammadov, announced in February, but independent economists have questioned the transparency of those deals.

Turkish firms have been winning non-Karabakh contracts, as well. In January, Aliyev signed a decree awarding management of Azerbaijan’s national lottery to a subsidiary of the Turkish firm Demirören Holding. “We are proud that the Republic of Azerbaijan, which offers a highly trustworthy environment for international investors, has picked us among many global companies to put their confidence in,” said the firms’ head, Yildirim Demiroren.

Azerbaijani economist Samir Aliyev said he had looked into the lottery deal and was not able to find any financial reports from the Turkish firm. “It is impossible for a company that doesn’t have financial statements to work transparently,” Aliyev wrote in a Facebook post.

But overall, the arrival of Turkish firms has been welcomed in Azerbaijan. “May God bless the Turks, they deserve even more than this,” economist Gubad Ibadodlu wrote on Facebook following the announcement of the mining contracts. “The main thing is to have transparency and reporting and to protect the environment at the same time.”

The business deals, meanwhile, have been overshadowed by a murky drama involving a nationalist Turkish political party and a new school in Shusha.

In early January, the leader of the Nationalist Movement Party (MHP), Devlet Bahceli, tweeted an announcement that – if Aliyev and Erdogan approved – the party would build a nine-classroom culture and art school in Shusha. Bahceli said the project would be run by the Grey Wolves, an ultranationalist group affiliated with the MHP, a party that is a current coalition partner with Erdogan’s Justice and Development Party (AKP).

The school would be named after Uzeyir Hajibayli, an early 20th-century composer, and the groundbreaking was to take place by January 30. A few weeks later, Bahceli announced that the plan had met with the approval of Aliyev and Erdogan.

January 30 came and went and in February, a Bahceli deputy visited Baku and met with Aliyev, who endorsed the project and said a suitable location would be found for the school.

Little more was heard about the school project until May 27, when Turkey’s National Education Minister Ziya Selcuk visited Baku and met with Aliyev. Selcuk said that work on a school was underway, that the teachers would be a mixed group of Turks and Azerbaijanis, and that Erdogan would help launch construction. “The foundation of a school destroyed by the Armenians in Shusha was laid this month,” Aliyev said. “The groundbreaking ceremony of the school, which is a gift offered by Turkey, will also be a part of the visit by my dear brother, President Recep Tayyip Erdogan,” Aliyev said.

But two days later, Bahceli tweeted that the Grey Wolves school project was shelved. “The Azerbaijani administration did not approve of our project and prepared a new and different school project,” he wrote. “Of course, this is their most natural right, and we will have no choice but to respect them.“

In response, Hikmet Hajiyev, Aliyev’s foreign policy adviser, tweeted in Azerbaijani, tagging Bahceli, that: “We are confident that in the conditions of mutual understanding, technical and architectural issues will be resolved at the working level, and the construction of the Shusha Art School named after Uzeyir Hajibeyli will begin soon.” The same day, in an interview with state news agency AzerTag, Hajiyev was asked about the school and said that “rejecting this benevolent initiative is out of the question.” He added: “A lack of complete information on the issue can lead to misunderstandings.”

Bahceli did not respond, and it remains unclear why the Grey Wolves appear to have been removed from the project.

“Does the Turkish government support the MHP’s project or not? There is no information about it,” wrote Azerbaijani analyst Shahin Jafarli on Facebook.