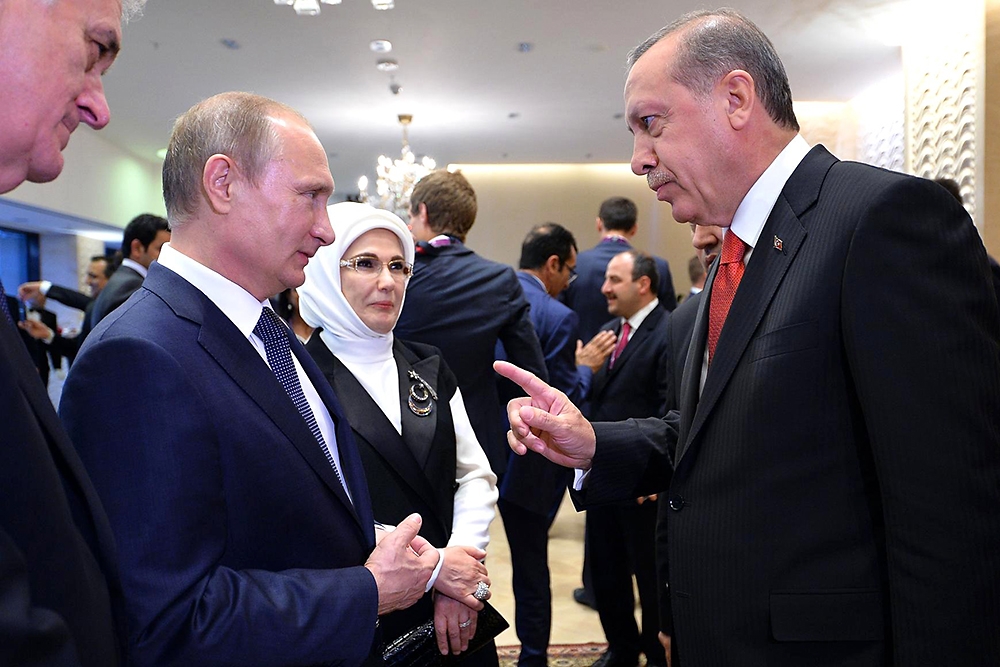 The recent failed military coup in Istanbul is pushing the Turkish government to prioritize a rapprochement with Russia, as Turkish President Recep Tayyip Erdoğan is due to meet his Russian counterpart Vladimir Putin in St. Petersburg on August 9.

The meeting comes at an opportune time for Putin. Turkey is a key geopolitical player in the Black Sea region. But its Western orientation is now coming under stress. Ankara’s ties with nearly all of its western allies are now strained amid suspicions of complicity in the unsuccessful July 15 putsch and growing criticism by both the United States and European Union over Erdoğan’s escalating crackdown in the coup-attempt aftermath.

Ever the opportunist, Putin seems content to set aside Turkish-Russian rancor. Relations between Ankara and Moscow were plunged into the deep freeze following Turkey’s downing of a Russian bomber operating from a Syrian airbase in November.

Even before the Istanbul coup attempt, relations had begun to thaw following Erdoğan’s apology in June, but that process now seems set to accelerate. “There is a mutual understanding these deteriorated relations do not benefit both countries,” said Ayşe Sözen Usluer, a foreign policy aide to Erdoğan. “I can see a political will to normalize these relations; I guess these relations will be back to what they were before the plane was shot down.”

Moscow was among the first foreign governments to offer support to Erdoğan during the failed military takeover – crucially when its outcome was far from clear. This endorsement has provided powerful impetus for August’s talks, said international relations expert Soli Özel of Istanbul’s Kadir Has University.

“Putin has given his support to Erdoğan. There are unconfirmed reports Russia was the first one to warn the Turks about the possible coup,” Özel said. “The fact that this will be the first major [post-coup] meeting by President Erdoğan with any world leader makes it … significant.”

Putin will surely point out a contrast between his quick support for the Turkish government and the comparatively slow reactions of many of Turkey’s western allies, which were widely seen as taking a more “wait and see” approach. Nearly all condemnations from Ankara’s allies of the putsch came after it was clear it was failing. There is a deep sense among leaders in Ankara that many politicians among its allies were not on their side.

The United Kingdom only made a statement at 11 AM local time the following morning. In the US, one Virginia state senator and former Marine, Dick Black, tweeted: “Good news of the day: Military attempting to oust Turkish dictator.”

Erdoğan advisor Usluer was clear in thanking US President Barrack Obama for his support, even though it came in the early hours of the morning local time when the coup attempt was collapsing.

“There is a lot of anger, anti-Western articles and statements from individuals and from government members,” cautioned veteran diplomatic columnist Semih Idiz of Turkey’s Cumhuriyet newspaper, “[There is] a lot of anti-Americanism, a lot of anti-NATO sentiment, so foreign policy appears to be heading for some kind of crisis.”

Meanwhile, Iran is working hard in the aftermath of the coup attempt to drive a wedge between Turkey and some of its closest regional allies, said Ozel. “The Iranians were very quick to condemn the coup. They also say the Qataris and Saudis were involved in the coup. I don't know if one can take this credibly at all. They also said it was the Russians, who warned the coup first and foremost,” he added.

Seizing the moment, Moscow is accelerating the process of lifting economic sanctions against Ankara. Russian Prime Minister Arkady Dvorkovich said on July 26 that talks will resume on the lifting of a ban on Turkish foodstuff and a resumption of the Turkish Stream gas pipeline. The pipeline project initiated in December 2014 links Russia to European markets, crucially bypassing Ukraine. The project was put on hold during the freeze in bilateral relations.

“Political decisions are in place to settle the issue of further implementation of the project,” Turkish Economy Minister Nihat Zeybekçi said on July 26, referring to the pipeline. Deputy Prime Minister Mehmet Şimşek, who accompanied Zeybekçi on an official visit to Moscow, went so far as to characterize Russia as “a strategic partner.”

Ankara’s embrace of Moscow could come at a high diplomatic price. “It is not only about bilateral relations or how we carry out trade, investment, and mutual projects,” Russian Foreign Minister Sergei Lavrov said July 22, commenting on the rapprochement process. “It is also about the cooperation over solutions to the Syrian crisis.”

The two countries support opposing sides in the Syrian civil war. Turkey serves as one of the main supply lines to the Syrian rebels, although Ankara insists it only allows humanitarian aid to go to the rebels, a claim few believe. Syria is expected to be a key issue when Putin sits down with Erdoğan.

“We will talk about all the issues that affect both countries,” confirmed Usluer, Erdoğan’s foreign policy aide.

Entering the talks with Putin, Erdogan is at a geopolitical disadvantage. “Turkey is not in a strong position after this coup attempt,” suggested diplomatic columnist Idiz. “It will not be able to impose its will.”

Putin could be tempted to play a long game, not seeking immediately to exploit Ankara’s vulnerabilities, and instead seeking to draw it away from its western allies.

Erdoğan is aware that sitting down with Putin could give him leverage with its Western allies. Usluer, the foreign policy aide, stressed that Ankara remains committed to NATO and its relationship with Washington. But she also said Turkey will be pragmatic. “Turkish foreign policy has been balanced since the end of the Cold War, it has quite the same distance from all countries, based on a win-win policy,” Usluer said.

--This story originally identified Dick Black as a US senator. Rather, he is a Virginia state senator. The mistake was corrected on July 29, 2016.