Between the unacknowledged pandemic and economic devastation, protestors said the situation at home is so dire that inaction seems worse than government reprisals. 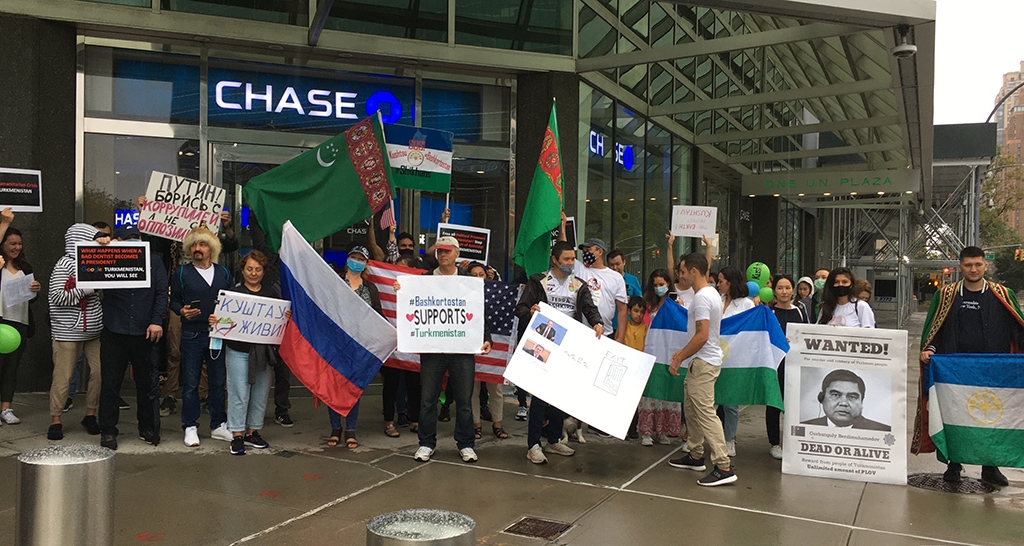 By 10 a.m. on a rainy Sunday morning in lower Manhattan, only two activists attending a protest against Turkmenistan’s government had arrived at the designated start point, across the street from the 9/11 Museum.

“I’m sorry,” said Zara Hayyt, one of the organizers. “I’m not sure how familiar you are with Central Asian people, but sometimes they run late.”

But within a few minutes, a dozen people had appeared, waving Turkmen flags as well as a large “Wanted” poster of President Gurbanguly Berdymukhamedov (“reward from people of Turkmenistan: unlimited amount of plov”).

Though the rain and pandemic ensured few spectators, protestors understood that their real audience was elsewhere: the Turkmen diaspora all over the West. Speeches decried the government’s bumbling response to COVID-19 – which Berdymukhamedov continues to insist has spared his country, despite ample evidence otherwise – recent natural disasters, and the dire economic situation. Protestors also encouraged fellow Turkmens to raise their voices.

“If not you, then no one else will save your country,” said Hayyt, addressing the diaspora in Russian.

Historically, even Turkmens living abroad have been extremely reticent to openly protest their government, for fear of reprisals against family at home.

In one-on-one conversations with Eurasianet, this was the overwhelming reason protestors cited for demonstrating now. Yes, it was risky to loved ones to be seen protesting. But between the unacknowledged pandemic and recent physical and economic devastation, the situation at home is so dire that inaction seems worse.

One of the last straws, for some, was religious. Olga Charyeva, another organizer, railed against Ashgabat’s effort to hide the graves of probable COVID victims in Lebap province by flattening them with earth-moving equipment – a bitter insult, she said, to Islam and grieving Muslims.

The rally represented the first time many Turkmen activists in New York moved from social media, where contact info is obscured and members may not even know each other’s names, into the open.

Now that they had, the mood was convivial and broad-minded. Protestors embraced other post-Soviet movements, with some carrying placards supporting anti-government demonstrations in Belarus. When the Turkmen protest moved from lower Manhattan to the United Nations building, it merged with a group demonstrating for environmental preservation in Russian Bashkortostan, with both groups holding aloft each other’s slogans.

Fear of reprisal was not the dominant emotion. But it was never far from the surface. As one activist joked, remarking on increasingly lax mask-wearing as the day wore on, “we’re not doing a very good job of hiding our identities.” She, like most, wouldn’t share her name.