Turkmenistan: A banana republic for our times

The president has pledged to defend Turkmenistan’s ecology, while he prepares to commission a vast artificial lake in the desert. 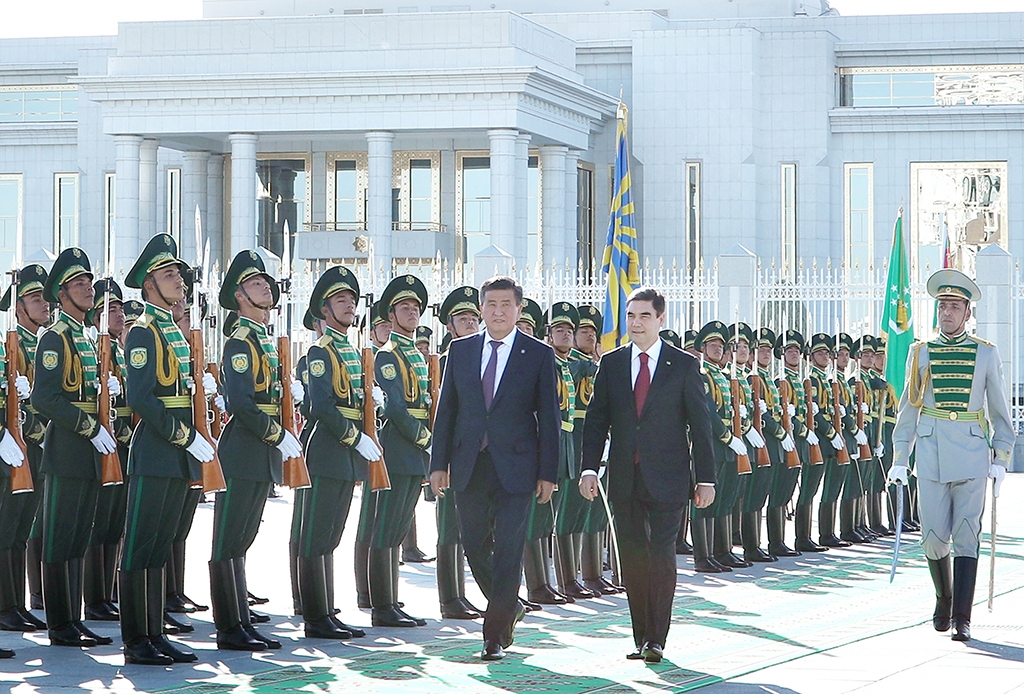 The media environment in Turkmenistan has gotten so bad that even accessing state press is becoming more difficult. Parahat.info, a website that posts copies of the daily Neutral Turkmenistan newspaper in its original form, has now gone behind a paywall. An annual subscription to the newspaper now costs $250 – a rate that compares unfavorably to most prestigious international titles.

While this may be no great loss to the media landscape, it is lamentable for some reasons. The hard copy of the newspaper routinely features some of the more outlandish instances of fawning to President Gurbanguly Berdymukhamedov. Fans of the peerless court poet Gozel Shagulyeva, for instance, will now have to cough up to read her breathless odes.

Other than that though, readers of the paper will be missing little, since most news deemed fit for print is also carried by the TDH state news agency. That news, needless to say, does not extend to the country’s woes.

For the second week in a row, TDH has given prominent exposure to Berdymukhamedov’s drag-racing. In an August 26 article, it noted that the president was using his “day off” to test-drive a new vehicle. Apparently, while cruising through the Karakum Desert, he made stops to take note of the medicinal herbs to be found in the sands of this expanse. This, as followers of Berdymukhamedov’s literary output will know, is a topic close to the leader’s heart. Copies of his lavishly illustrated two-volume work, Medicinal Plants of Turkmenistan, can even be found for sale online.

The automotive fixation is set to continue until the middle of next month as the much-hyped Amul-Khazar rally is due to run September 9 to 15.

Away from the car, Berdymukhamedov attended his second major regional summit in as many weeks on August 24, when the presidents of the five former Soviet republics in Central Asia met in the port town of Turkmenbashi for talks on the fate of the doomed Aral Sea.

Berdymukhamedov clearly enjoyed playing host. A day before proceedings opened, he greeted his Kyrgyz counterpart, Sooronbai Jeenbekov, in Ashgabat with a procession of traditionally dressed cavalry. State media outlet Golden Age used this occasion to declare the start of "a new era for Kyrgyz-Turkmen relations."

Even TDH struggled to incite much excitement, however. The new era is built on a series of documents outlining cooperation on tax reporting, an understanding on “the main principles of cooperation in transportation” and the establishment of sister-city relations between Ashgabat and Bishkek. Hardly earth-moving stuff.

While TDH issued a long communique describing the exuberantly titled Council of the Heads of the Founding States of the International Fund for Saving the Aral Sea, no major new agreement was reached. This is hardly surprising given that this body’s deputy director, Marat Narbayev, told RFE/RL's Turkmen service Radio Azatlyk that the body had no funds of its own. Narbayev even cast rare inside light on regional divisions, saying that, "since 2016 [Kyrgyzstan] ceased its activities in the fund.”

“Apparently Kyrgyz President Sooronbai Jeenbekov participates in this summit as an honorable guest,” he added.

Berdymukhamedov nonetheless again pledged to defend the sea and Turkmenistan's ecology – something of a theme for him of late – but incongruously also said his government would finally commission the first stage of the artificial Altyn Asyr lake.

This project, which will entail digging a new lake in the middle of the Karakum Desert, was criticized as an ecological disaster waiting to happen when Berdymukhamedov first touted it in 2009.

For watchers of the diplomatic community in Turkmenistan, a couple of interviews appeared this week with prominent representatives of Ashgabat’s foreign contingent. Russia-based Arzuw News, whose friendly coverage hints at strong ties to the state, on August 21 uploaded an interview with the United Kingdom’s ambassador to Turkmenistan, Thorda Abbott-Watt.

Much of it needs to be watched through one’s fingers. Among the first questions are whether Abbott-Watt’s father chose her career for her. The interviewer later followed up with two questions about “women's happiness.” No such gendered questions were asked of U.S. Ambassador Allan Mustard in Arzuw's July 3 interview. Both interviews avoided dwelling on Turkmenistan’s economy or politics.

Ambassador Abbott-Watt did, however, briefly discuss British-Turkmen business ties, such as they are. She named only earth-moving equipment manufacturer JCB as exporting to Turkmenistan. She added that other British goods are re-exported to Turkmenistan though Turkey or the United Arab Emirates, but provided no details.

A cursory search reveals that JCB's exclusive reseller in Turkmenistan is Dash Demir, which also partners with a number of other Western construction equipment businesses. In at least one advertisement in one of Turkmenistan's government-issued glossy magazines, the company casts itself as JCB's local subsidiary. Dash Demir’s exact ownership could not be determined and privately held JCB offers no description of its activity in Turkmenistan.

JCB was among the sponsors of the Turkmenistan-UK Trade and Industry Council meeting held this January, potentially indicating it sees room for further business. Another sponsor was oil firm Buried Hill, which holds an exploration license for Block III in the Caspian Sea, one of the areas yet to be delineated by the littoral states after this month's Caspian Sea summit.

Some interesting comments on Azerbaijan and Turkmenistan's relationship regarding the Caspian did emerge this week, with Azerbaijan’s President Ilham Aliyev saying that it was up to Turkmenistan to make proposals for a Trans-Caspian Gas Pipeline.

Aliyev made the remarks during an August 25 visit to Baku by German Chancellor Angela Merkel, who generated some interesting but ambivalent news on the energy front.

In comments to the Financial Times that were published on August 21, an unnamed senior German official noted, while dwelling on potential alternative sources to Russian gas for the Southern Gas Corridor, that Merkel still sees Iran and Iraq as such potential sources – a dispiriting avenue of competition for Turkmenistan. On a more positive note, Georgian Foreign Minister Davit Zalkaliani said that Merkel expressed her support for having Turkmen gas delivered through the Southern Gas Corridor during her August 23-24 visit to Georgia.

And there has been mixed news on the fate of Turkmenistan's other two planned gas export projects: the Turkmenistan-Afghanistan-Pakistan-India, or TAPI, pipeline and Line D of the China-Central Asia gas pipeline, which is projected to run through Kyrgyzstan and Tajikistan.

According to India's Economic Times, New Delhi is seeking to renegotiate the price it agreed in 2013 to pay for future gas supplies through TAPI. Given the various geopolitical and security headwinds the pipeline already faces, not to mention doubts about financing, demands to renegotiate the pricing structure will not go down well.

More positively, Line D is edging closer to progress in construction, which was frozen last year. RFE/RL’s Tajik service, Radio Ozodi, reported on August 21 that Dushanbe has allocated some 9,500 hectares for the laying of the pipeline.

It is really only Turkmenistan’s relationship with China that can reliably deliver good news. Turkmen exports to China were up 16 percent, some $632 million, in January to July, as compared to the same period in 2017, according to Economist Intelligence Unit analyst Sam Bhutia. But any excitement over these figures is dampened by the fact that we do not know the terms of Turkmenistan's repayments to China for constructing the previous three legs of the China-Central Asia gas pipeline.

Economically, things are as bad as ever back home. The exile-run Chronicles of Turkmenistan noted on August 22 that the government has dramatically raised the prices of most medications, including those which were previously free. And Turkmen Yurt, an outlet run by a group called Rights and Freedoms of Turkmen Citizens, reported yet another round of crackdowns on currency markets in Ashgabat.

At least Turkmen could soon be able to use their increasingly worthless currency to buy the latest crop brought to the country as part of the government’s aggressive import-substitution agenda. This week, government-affiliated TurkmenPortal declared that Turkmenistan may produce its first-ever banana crop in December. The headlines just write themselves.